It has been a few years since I last discussed Garmin (NYSE:GRMN) and considering the company's share price has doubled it might be a good moment to check in to see if there's any upside potential left.

Garmin had an excellent third quarter. Not only was it able to boost the revenue by 15% compared to Q3 2018, it also was able to slightly increase the gross margins from 59.4% to 60.7% while the operating margin increased even more substantially from 24.2% to 28%. It looks like Garmin may very well be on its way to a record year depending on its performance in the final quarter of the year.

The total revenue in the first nine months of the current year came in at $2.66B resulting in a gross profit of $1.59B and an operating income of $669M. An excellent result although Garmin actually increased its R&D expenses by over 2% to $443M while it kept the advertising expenses virtually unchanged at just over $100M. So as you can see on the next image, Garmin was not required to spend more on COGS and advertising to cause the revenue to increase. 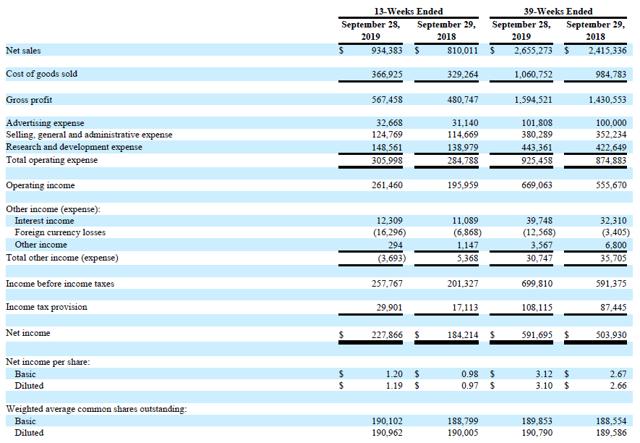 And as Garmin's net cash position continues to increase, so does the net interest income which was boosted by roughly 20% from $32.3M to $39.7M. Unfortunately the finance expenses increased compared to the first nine months of last year due to a higher FX loss and a slightly lower 'other' income. But the bottom line result is still impressive: a net income of almost $592M or $3.12 per share compared to an EPS of $2.67/share in the first nine months of last year.

In the previous few articles I mainly focused on Garmin's ability to generate a positive free cash flow as that's what made the company interesting when it was still trading in the $40 range.

In the first nine months of the year, Garmin reported an operating cash flow of $464M, but this includes a sizable investment in its working capital position where there was a $211M inventory build-up (undoubtedly in anticipation of the holiday season). After adjusting the operating cash flow for those elements, the adjusted operating cash flow actually comes in at $783M. Considering the capex decreased from almost $126M in the first nine months of last year to $93M in the first three quarters of the current year, the adjusted free cash flow result during 9M 2019 was roughly $690M. Divided by the 190.1M shares outstanding results in a free cash flow result per share of just over $3.60. 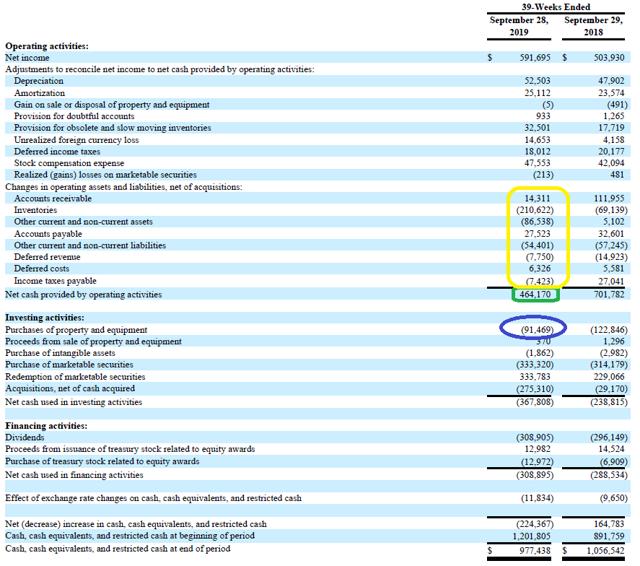 The difference with the EPS could be explained by some non-cash expenses like stock-based compensation which is an operating expense but as there's no cash flowing out of the company, a stock based compensation has no impact on the ability of Garmin to generate cash flows.

Garmin spends just half on the dividend - and hoards the rest

Garmin's capital allocation is quite interesting. The company spent just $309M on dividends in the first nine months on the year which means approximately $380M was still left on the table (based on the adjusted free cash flow result). A large chunk was obviously used for the inventory build-up, and Garmin also spent $275M on acquisitions.

So while Garmin did indeed spend all of its incoming cash flow in the first nine months of the year, it doesn't always do so. Although that's a good problem to have, it may make more sense for Garmin to initiate a stock buyback program to mitigate the impact of the employee option exercises. The share count has increased by approximately 2M shares over the past year, and this will start to hurt the per-share performance of the company as there are more hungry mouths to be fed.

The problem now obviously is that Garmin also doesn't want to overpay for its own stock. And despite the very strong results in the first nine months of the year, Garmin's current valuation at a free cash flow yield of around 5% may not be too enticing for the company to embark on a huge buyback program.

And although I would also not be in favor of just buying back stock hand over fist, I think it does make sense to buy enough shares to offset the dilutive impact of option exercises. A normal buyback authorization and program would be the easiest for Garmin to implement, but this is a case where a Dutch tender auction could make sense as well given the relatively small amount of shares (2M) that would have to be repurchased per year and Garmin's strong cash flow generation.

Garmin is a very interesting company but despite its strong growth results it may have reached its fair value. Trading at a free cash flow yield of 5% still beats bonds, but the main question now obviously is how much Garmin has left in the tank.

Despite reaching its fair value, it may not be a pure 'sell' and you could keep it for the dividend and the cash buildup on the balance sheet. As of the end of September, Garmin had almost $1.3B in cash and liquid marketable securities and an additional $1.25B in longer term securities. With no debt on the balance sheet, Garmin actually is in a pretty good shape and one could argue safety comes with a price.

The Investment Doctor
16.27K Followers
Author of European Small-Cap Ideas
We zoom in on capital gains and dividend income in European small-caps
As I'm a long-term investor, I'll highlight some stockpicks which will have a 5-7 year investment horizon. As I strongly believe a portfolio should consist of a mixture of dividend-paying stocks and growth stocks, my articles will reflect my thoughts on this mixture.
Follow