Volatility has not reared its head despite so many seemingly volatile factors. Slowing growth, trade wars, impeachment, flattening earnings, banks afraid to lend to each other... none of it matters apparently.

Remember, I showed you this chart of the volatility index a couple weeks ago: 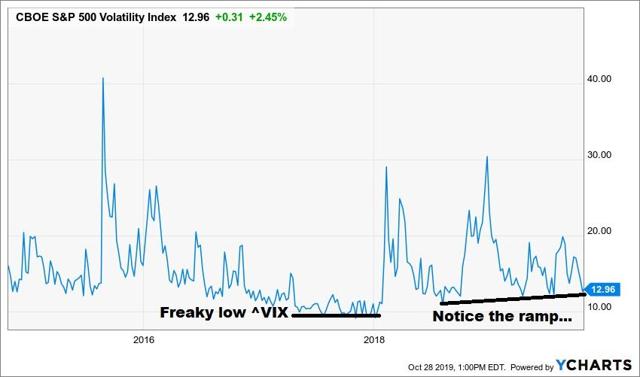 Here's where we stand today: 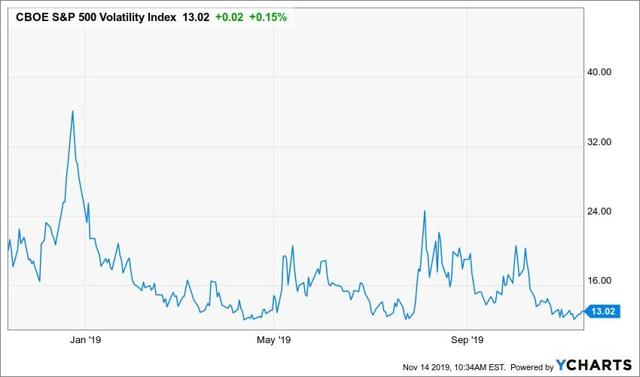 Basically the same place, and yet... 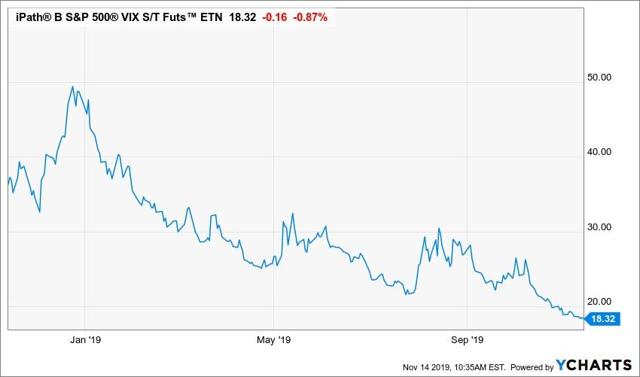 ...the iPath S&P 500 VIX ETN (VXX) continues to fall. That's the futures roll-over deterioration of that security. That's why VXX trades are only for very short swing trading and day trading.

We're going into the third week with some of us holding a little volatility hedge. The goal here is to get out as whole as possible. Maybe we'll get a little lucky and make some money. This is a hedge remember, so presumably a few stocks are making you money in the meantime.

I still think we have a seasonal rally in December and January. So, I think the better set-up is coming. Either cut your losses on your VXX trade or be stubborn and try to make a buck into Thanksgiving. Historically, that's a good play. Today? Who knows.

The Banks Are Afraid To Lend To Each Other

The Fed has transacted about $3 TRILLION in overnight loans since early September now. Remember, those loans get repaid the next day, but yet, the Fed balance sheet has expanded by about $28 billion so far in just several weeks. Look how sharp a turn this is:

There's a lot of reasons banks are short on cash. Initially, the reason was that they were looking for low risk ways to make a buck. Now it's not quite that easy. The Federal debt is a trillion dollars all of sudden the past couple years. That has knock-on effects.

What we are seeing is big banks are buying U.S. Treasuries that the government has to sell to finance its debt. There's no official rule I know of that says the banks have to buy those treasuries, but they sort of have to. Here's why.

Banks are required to hold a certain amount of high-quality securities that are easily turned into cash as part of the liquidity coverage ratio rules. Well, guess what is defined as high quality? That's right, U.S. Treasury debt.

The Fed now has to fund the repo market because most banks are down to their statutory cash reserve levels. So, with rising U.S. government debt, the banks are squeezed, and so, the Federal Reserve has to be the lender of last resort in the repo market during an economic expansion.

Let's be really clear about this, such a circumstance has never happened before. The spiking of the national debt while the economy is ostensibly good is completely irresponsible and NOT a Keynesian thing to do. What we are seeing is a juicing of the economy that cannot really end well, unless... helicopter money is inevitable.

I said it nearly two years ago now the Chinese would stretch things out, get just what they need and not make any real agreement. The best hope is a "fake deal" that returns the economy back to where it was a couple years ago. Or, maybe the best hope is we have a recession, reduce ties to China and move more supply chains home. Maybe, but less economic integration with China means more geopolitical conflict, and as history has shown us REPEATEDLY, that often leads to war.

We need a slightly, SLIGHTLY, improved version of the Trans Pacific Partnership, or TPP, that was politically vilified. There's a framework out there now. We'll see if the U.S., India, Japan and South Korea can figure something out early next decade. There's no quick fix to the trade issues.

So, the trade war kicks on, the banks are tight, the Fed is in rescue mode, and corporate earnings are flattening out with falling expectations (oh yeah, that). But the stock market keeps touching new highs. And valuations are expanding because, well, earnings aren't. This can't possibly end badly; it's too magical.

Interestingly, during the recent rally, cash levels fell across the board. There's not much firepower left. The Fed repo money barely trickles into the economy. It's hardly enough to justify the huge rally in the total value of the stock market.

So, what's really going on? Essentially, everybody is blowing their wad at the same time. If we get the Santa Rally and January Effect to set new highs, and I think that's likely that happens, which will mark EUPHORIA or DELUSION in my opinion.

Remember my talk with Mark Yusko on Twitter a couple years ago: 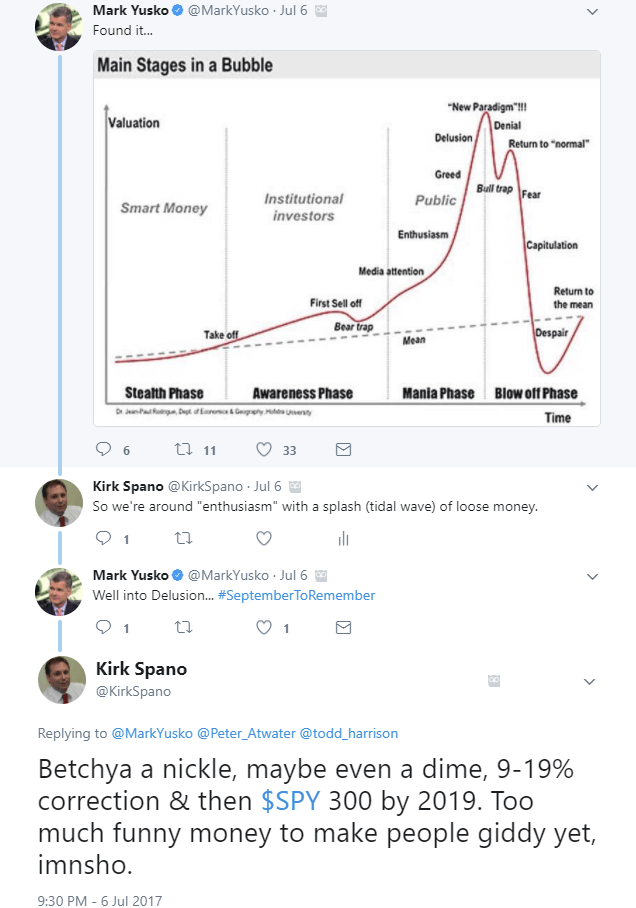 Expect the rich to sell into that delusion. Family offices (private investment firms set up for the super duper rich) are already lowering equity asset allocations. It never ends up well for small investors when they are buying from the rich investors.

Use any rallies to reduce equity asset allocations based on your risk tolerance category. See the "Very Short Lists" for recommendations.

Build a Margin of Safety into your investing process in this changing and sometimes dangerous world. Benefit from insights and research by Kirk Spano, Dividend Sleuth and David Zanoni.

For up to date focus lists and ongoing asset allocation modeling, join our growing group of mindful investors. Try us with a 20% first year discount today.

Disclosure: I am/we are long VXX. I wrote this article myself, and it expresses my own opinions. I am not receiving compensation for it (other than from Seeking Alpha). I have no business relationship with any company whose stock is mentioned in this article.

Additional disclosure: I own a Registered Investment Advisor, but publish separately from that entity for self-directed investors. See relevant terms and disclaimers at the website of Bluemound Asset Management, LLC. Any information, opinions, research or thoughts presented are not specific advice as I do not have full knowledge of your circumstances. All investors ought to take special care to consider risk, as all investments carry the potential for loss. Consulting an investment advisor might be in your best interest before proceeding on any trade or investment.