Having taken a deep dive look at Exelisis, I believe the negative share price reaction to the company's latest set of results, which out-performed expectations, was unwarranted. Overall, I believe the stock is undervalued. In this article I will address the concerns surrounding the company's ability to grow revenues and the bottom line, and try to explain why they may be slightly overstated.

I am not saying Exelisis is not a risky investment; I believe the main risks are the lack of alternative revenue generating options to "blockbuster" drug Cabometyx, expiring patents for Cabozantinib, and the extreme rising costs of R&D. However, I will try to show, these are outweighed by the potential of new drugs, the company's extremely strong financial position, and promising clinical trials which indicate Cabometyx can succeed as a first line treatment for kidney and liver cancers.

There's no pleasing some analysts. Last week, Exelixis (NASDAQ:EXEL) delivered a set of results that outperformed expectations, only for the share price to nosedive.

A lot of companies engaged in drug discovery view themselves similarly; as a kind of portfolio manager of numerous treatment products, taking responsibility for navigating the drugs through FDA phase I, II, and III trials before being given permission to commercialise, seek reimbursement and become the preferred choice of treatment by doctors and hospitals.

To date, Exelixis has achieved its most notable success via the commercialisation of the medication Cabozantinib, a small molecule inhibitor of the tyrosine kinases c-Met, VEGFR2, AXL and RET (Source: Wikipedia).

As we can see from the above table, Cabometyx is responsible for the vast majority of revenues derived from Cabozantinib. Cabometyx, taken in tablet form, is currently used to treat kidney cancer; specifically renal cell carcinoma (RCC), and previously treated hepatocellular carcinoma (HCC).

Although Cabometyx achieved the notable distinction of 4 consecutive quarters of sales totalling more than $1 billion, analysts clearly decided that a failure to increase sales quarter on quarter; a decrease from $189m to $187.4m was recorded; was more significant and indeed indicative of long term issues at the company.

All this despite Exelisis' attempts to reassure investors that the product franchise was performing well.

The slide above shows that demand for Cabometyx is increasing by 14% year-on-year; it is the number one prescribed TKI (Tyrosine Kinase Inhibitor); and that the drug can treat both first and second line patients.

Unfortunately, there is no known cure for kidney cancer, meaning patients often move on from first line treatments like Bristol-Myers-Squibb's Opdivo and Yervoy, to Cabometyx (Source: The Motley Fool); which has been proven to prolong life in clinical tests vs a placebo drug; in some 90% of cases.

It is first line treatment, however, that generates the higher revenues. As such, as was pointed out in a piece on Exelisis published to Seeking Alpha on Monday, analysts see the outcome of an FDA Phase III clinical trial, called Checkmate 9ER, which will test the efficacy of a combined Cabometyx and Opdivo treatment for liver and kidney cancer, as critical to the Exelisis' success.

My research indicates that this trial is likely to return positive results for both the treatment of liver and kidney cancer (Cabometyx was approved as a stand alone treatment for liver cancer in January '19 by the FDA). According to a research note from Morningstar:

We think there is strong potential for cabozantinib in combination with Bristol's Opdivo, which is in a phase 3 trial (called Checkmate 9ER). In our base case, we assume a high likelihood of approval for the combination, given that each drug is approved as a monotherapy and previous studies have indicated that checkpoint inhibitors combined with a TKI result in strong efficacy in kidney and liver cancers.

Most of the concerns around Exelisis seem to stem from doubts about the company's ability to continue to grow sales of Cabometyx, but, in my view, it is far from a being even close to a busted flush.

Another problem that Exelisis has is the dreaded generic competition.

According to the same Morningstar research note, Exelisis' strongest patents for Cabometyx are due to expire in 2026, although there is a possibility that secondary patents covering formulation and method of treatment could be upheld, giving Cabometyx a further stay of execution until 2030.

In fact, Exelixis reported in its Q3 earnings that it had received a paragraph IV certification notice (Source: MSN) from MSN Pharmaceuticals who intend to seek permission to launch a generic version of Cabometyx tablets, at a heavily discounted price.

This is clearly not good news and will require Exilisis to fight off MSN through the courts, which will be expensive and a distraction from its core business.

That said, it is far from a given that generic alternatives to cabometyx will be available any time soon, and even if they were, there is no guarantee that hospitals will choose to use them over cabometyx, price notwithstanding. There are other concerns, around efficacy, that are more important.

Perhaps a bigger concern is the strength and numbers of Cabometyx's competitors. 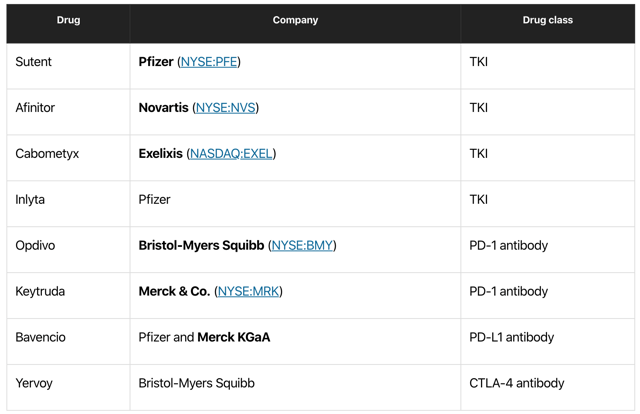 Perhaps the biggest threat comes from the combination of Merck's Keytruda and Pfizer's Inlyta; a recent study showed this combination significantly outperfoming Cabometyx, reducing risk of death by 47% compared to Sutent, which is superior to Cabometyx's 20%. Another threat comes from Pfizer's PD-L1 antibody Bavencio, currently undergoing trials and returning initially promising results.

To date, however, Cabometyx occupies a leading position in second line treatment and demonstrates significant potential in first line treatment also, either as a stand-alone or as part of a combined treatment. Another reason not to come down too hard on Exelisis' share price. At times it does seem that the market is pricing too much pessimism into Exelisis stock.

An interesting aspect of Exelisis' commercial strategy is the licensing agreements it has made with a number of major pharmaceuticals, giving them permission to develop and commercialise Cabozantinib outside of the US.

As we can see from the table above, these revenues are far from insignificant, contributing $727m of revenues in the first 9 months of 2019. In my view, it is a good sign that so many major pharmaceuticals are developing Cabozantinib.

According to Morningstar's research note, both GlaxoSmithKline and Bristol Myers Squibb rejected the opportunity to collaborate with Exelisis (in 2008 and 2010 respectively), which has ultimately proved beneficial for the Exelisis.

Given the number of separate entities focused on developing the potential of Cabozantinib, it would not surprise me if the drug emerged as a contender to treat other forms of cancer. Clearly, Exelisis benefits more when it retains the rights to commercialisation, but sizeable milestone payments also provide a significant boost to revenues.

For a company that is often accused of being a "one trick pony", having developed only one drug all the way through to commercialisation, it is good news for Exelisis that it has proven to be an effective treatment across multiple use cases, and very likely, may be applied to many more in the future.

With that in mind, it is worth pointing to a number of agreements Exelisis has reached to develop other treatments. Remember, the potential of Cabozantinib was not recognised by BMS or GSK at first pass, so it is quite possible that Exelisis has another potential "blockbuster" in its stable.

In May this year, Exelisis entered into an exclusive option and license agreement with Iconic, gaining the rights to develop ICON-2; a leading oncology antibody-drug conjugate program, paying $7m for the privilege. If Exelisis exercises its option to develop and commercialise the treatment, it would end up paying Iconic $262.5m in milestone and associated payments.

In July, Exelisis paid $10m to India-based biotech Aurigene for the right to up to 6 new programs focused on oncology and inflammatory diseases.

Admittedly, Exelisis' stable of treatments in development may look a little thin currently, with limited potential to compensate for any lost Cabometyx revenues. The company is, however, in my opinion making the right moves by committing to develop new treatments. Remember, Exelisis is a drug development company, not just a sales operation for Cabometyx.

Its also worth paying attention to Cometriq, an FDA approved therapy for the treatment of progressive, metastatic MTC. Despite black-box warnings for gastrointestinal perforations, fistulas, and hemorrhage, Cometriq is one of only 2 treatments of its kind, the other being vandetanib.

One thing that struck me when reading through Exelisis' financial statements was the near doubling of research and development costs year on year during the first 9 months of 2019; from $125m, to $243m.

If R&D costs keep rising at that rate then Exilisis will soon run into financial problems, but it seems highly unrealistic to assume they will continue rising so steeply.

Management ascribed the quarter-on-quarter increase in R&D to the Aurigene deal, but there is, in my opinion, a big question mark / red flag around what exactly has been the driver of a near-doubling of R&D costs over the past year.

Luckily, however, Exelisis has a whopping cash position of around $1.25bn, which should assuage any concerns around its financial position.

That represents a considerable "war chest" with which to acquire promising new drugs, perhaps at later stages of development, to fight legal battles, and to continue its trials with Cabozantinib - even to compensate for declining sales of Cabometyx over the short term whilst the company brings its other products on.

Conclusion - Not Perfect, But Far From A Disaster. At This Price, I'll Invest

It hasn't been a perfect quarter from Exelisis, but its also important not to forget that the company is still in a position of relative strength. It has a billion-dollar a year revenue drug which is currently still the preferred choice for second line treatment and is showing promise as a best-in-class first line treatment drug alongside Opdivo.

It has partners, like Ipsen, Caremark and others developing Cabozantinib and making sizeable milestone payments.

It also has a pipeline of drugs in development, which are admittedly early stage, but Exelisis has a track record of hitting the jackpot when selecting drugs to develop and commercialise.

And finally, it has no financial worries. Exelisis could both make acquisitions or become an acquisition target itself. 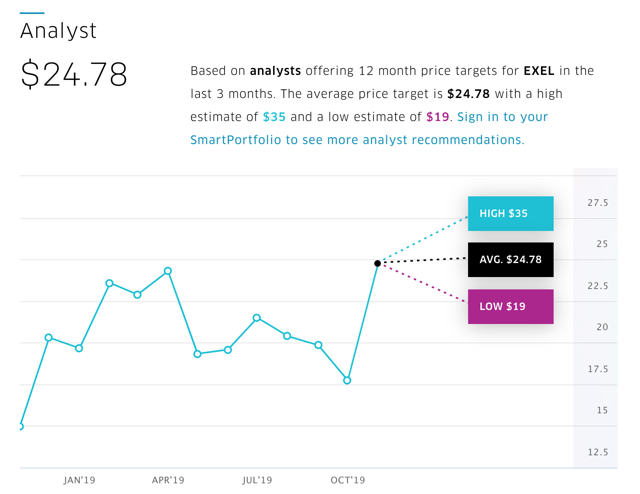 Personally, I do not expect Exelisis' share price to rise all that much between now and its next set of results, but I do believe that the current share price undervalues the company, for all of the reasons given above.

Hence, I intend to buy at current price. Over the long term, I believe Exelisis has the ability, and finances, to address analysts concerns and overcome them. I think a fair price for Exelisis, if no new positive new-flow, would be closer to $25.

Disclosure: I/we have no positions in any stocks mentioned, but may initiate a long position in EXEL over the next 72 hours. I wrote this article myself, and it expresses my own opinions. I am not receiving compensation for it (other than from Seeking Alpha). I have no business relationship with any company whose stock is mentioned in this article.