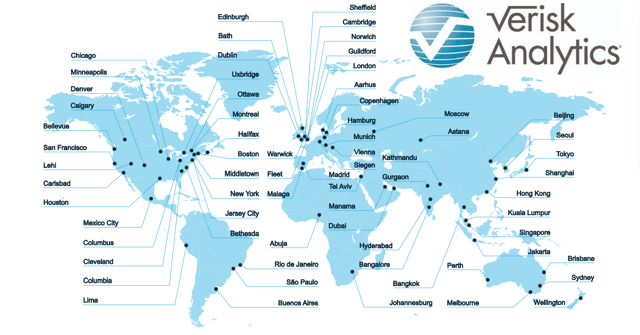 “Compound interest is the eighth wonder of the world. He who understands it, earns it... he who doesn't... pays it.” ― Albert Einstein

Previously, I provided an overview of Verisk Analytics (NASDAQ:VRSK)'s business model and competitive advantage, hoping to lay a foundation for further study, and I stated:

"The ensuing questions are to what extent the growth prospect of the company will be affected and, from a valuation point of view, whether a sufficiently large margin of safety has been created by the sell-off. These questions are beyond the scope of this article and will be discussed in forthcoming pieces."

In this article, let's look at the growth profile of Verisk, to see whether the company has been able to successfully parlay its competitive advantage into sustainable growth.

The key components of Verisk's growth strategy include the following:

The data analytics space serving the P/C insurance industry was and continues to be highly-fragmented in the ex-Verisk part and, therefore, has been a prolific supplier of bolt-on acquisition targets for Verisk. With acquisitions, Verisk strengthens its core databases and enriches its suite of solutions, which are then being cross-sold tapping into its unique access to the customer base (Fig. 1).

Fig. 1. Verisk's growth on the back of its core competencies. Source.

Over the years, Verisk also made inroads into industry verticals while sticking to its operational model, i.e., recurring revenue, scalable solutions, and low capital intensity. They expanded into mortgage, health, natural resources, and financial. Please note, it exited from the mortgage business in 2014 and the health segment in 2016 (see here).

Verisk targets a CAGR of 7-8% in organic revenue growth, which is translated into 8-10% organic EBITDA growth thanks to its operational leverage, which is, in turn, converted into double-digit growth in EPS on the back of its capital efficiency and share buyback (Fig. 2).

Year-over-year revenue growth is a key performance metric for measuring Verisk's ability to generate increased revenue through (1) increased sales to existing and new customers, and sales of new or expanded solutions to existing customers, and (2) strategic acquisitions of new businesses.

From 2007 to 2018, with acquisitions and divestments inclusive, Verisk was able to more than quadruple revenue, or grow revenue at a CAGR of 10.5% (Fig. 3). During the same period of time, the company managed to keep an organic revenue growth rate of 6.8% (Fig. 4).

The metric of EBITDA margin measures segment performance and scalability of Verisk. The EBITDA margin can only be maintained at an elevated level if Verisk is able to increase revenues while simultaneously keeping expenses under control.

From 2004 to 2015, Verisk was able to increase the EBITDA margin from 37.3% to 51.0%, confirming that the company (then mostly P/C insurance business) enjoys an effect of economies of scale.

The uptrend in the EBITDA margin broke due to the acquisition of Wood MacKenzie, an Aberdeen, U.K.-based oil consultancy, in 2015 and the $139.7 million one-time profit resultant from the sale of Verisk-Health in 2016. Verisk also accelerated acquisition in the financial services sector during that period of time. Both the financial services segment and WoodMac division have an EBITDA margin which is respectable but significantly lower than Verisk's flagship P/C insurance business; WoodMac also introduces commodity cyclicity into the financial performance of Verisk. Consequently, the EBITDA margin has softened in 2017 to date. Nonetheless, on a consolidated basis, the EBITDA margin was still maintained as high as 47.2% in 2018 and seems to begin to improve since the 2Q2019 (Fig. 5). 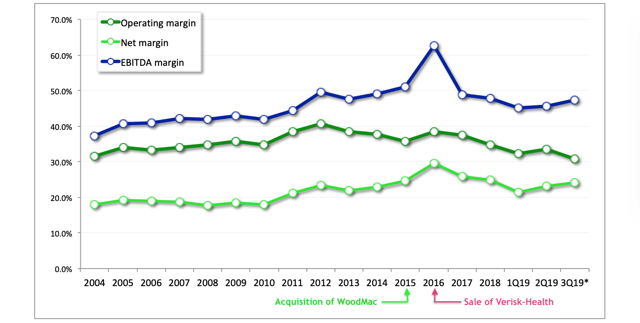 Fig. 5. The operating, net, and EBITDA margins of Verisk. The 2016 margins are distorted by gains due to the sale of Verisk-Health while the 3Q2019 margins are adjusted for the one-time charge of $125 million resultant from a jury decision. Source: Laurentian Research based on company released annual reports.

Fig. 6. The net EPS and free cash flow per share of Verisk. Please note, in each of 2009 and 2016, there are major one-time effects from discontinued businesses. Source: Laurentian Research based on company released annual reports.

Verisk suffered a major setback thanks to a jury verdict in the U.S. District Court for the District of New Jersey on September 25, 2019. The verdict states that Verisk and its Xactware Solutions subsidiary infringed the proprietary intellectual property of Eagle View Technologies, a provider of aerial imagery and data analytics. The jury awarded Eagle View $125 million in damages. The Court has also issued a temporary restraining order stopping, among other things, Verisk's sale of Property InSight, Roof InSight, Geomni Roof, and Geomni Property, as well as its sale or use of Aerial Sketch version 2, after September 25, 2019, and until October 8, 2019, when the Court will hold a hearing on a permanent injunction (see here).

Despite the scary size of the financial penalties assessed, I believe the jury decision may only have a limited impact on Verisk's overall business. It only affects a relatively small portion of Verisk's insurance offerings, i.e., Xactware and Geomni, with ISO, the main workhorse, entirely unaffected (Fig. 7). In addition, Geomni has been running at a loss (see here); given the poor financial performance of Geomni has not been able to drag down corporate-level profitability in the past, it follows that the division plays a relatively insignificant role in the sprawling business of Verisk. In the worst case, even if the company were to write off Geomni entirely, it would be unimaginable the impairment can be anywhere near the $3.51 billion market cap reduction caused by the 13% sell-off triggered by the jury decision.

Therefore, I believe the courtroom setback, as well as the $125 million penalties, leaves the durable competitive advantage commanded by the company largely unscratched and will not have a substantial negative impact on the long-term growth prospect of the company.

Chain of conversion. I especially like the fact that Verisk was able to transform 6.8% of organic growth (or 10.5% of total growth) in revenue into 13.4% of yearly increase in net income, banking on the scalability of its business (Fig. 2), and to further convert that 13.4% annual growth in net income into a 15.2% CAGR in EPS through a share buyback. Such an ability to convert fast revenue increase, via faster net income growth, into yet faster EPS expansion, I believe, highlights the strength of Verisk's business model and management's track record of prudent capital allocation and shareholder friendliness.

Compounding growth. As I have shown above, Verisk has been able to deliver consistent, rapid, and profitable growth. Even general market recessions, as severe as the 2008 global financial crisis, did not stop its pace of expansion. Going forward, I believe its unique business model, in combination with the industry settings that it operates in, will lead to unimpeded growth into the foreseeable future. Such consistent growth, year after year, is an excellent recipe for compounding growth of wealth.

Entry opportunity. The bane of seeking investment opportunities in such high-quality businesses as Verisk is that the stock seems to be expensive the vast majority of the time. Rare entry opportunities only appear when a general market recession occurs or an idiosyncratic disaster strikes.

Since the newsbreak of the jury decision, the share price of Verisk has declined by some 13% (Fig. 7). Because the impact of the courtroom setback is limited to a small portion of one business segment and will likely be short-lasting as discussed above, the sell-off is probably an over-reaction. Therefore, the sell-off may provide a rare entry opportunity for investors who believe in Verisk's durability of competitive advantage and prospect of long-term growth. 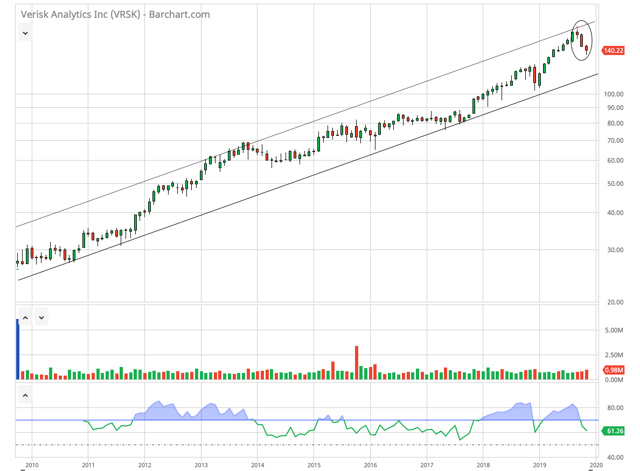 Fig. 7. The stock chart of Verisk, with a logarithmic vertical axis and back adjusted for dividends. Source.

The ensuing question is, from a valuation point of view, whether a sufficiently large margin of safety has been created by the sell-off. This question is beyond the scope of this article and warrants a full discussion in another piece.

Verisk is an excellent investment vehicle for your wealth building. A thorough understanding of this complex business in what we call the 'Digital Resources' space involves a holistic analysis from multiple angles. To access our actionable investment theses on many companies like Verisk, you are invited to join The Natural Resources Hub.

Sign up today at The Natural Resources Hub and benefit from our investment platform right away!

As a natural resources industry expert with years of successful investing experience, I conduct in-depth research to generate alpha-rich, low-risk ideas for the member of The Natural Resources Hub (TNRH). I focus on identifying high-quality deep values in the natural resources sector and undervalued wide-moat businesses, an investment approach that has proven to be extremely rewarding over the years.

Some abridged samples of my writings are published here, while 4X as many unabridged articles are posted without delay at TNRH, a popular Seeking Alpha Marketplace service, where you also find:

(2) live portfolios for both capital appreciation and income generation,

(5) a community of investors to bounce off ideas and share information with.

Sign up HERE today to benefit from Laurentian Research's in-depth research and the TNRH platform right away!

Disclosure: Besides myself, TNRH is fortunate enough to have multiple other contributing authors who post articles for and share their views with our thriving community. These authors include Silver Coast Research, ..., among others. I'd like to emphasize that the articles contributed by these authors are the product of their respective independent research and analysis.

Disclosure: I am/we are long VRSK. I wrote this article myself, and it expresses my own opinions. I am not receiving compensation for it (other than from Seeking Alpha). I have no business relationship with any company whose stock is mentioned in this article.