The ProShares UltraPro QQQ ETF (NASDAQ:TQQQ) is an exchange-traded fund that most investors would probably never consider owning. Do the math: how would have a Nasdaq 100 (QQQ), three-time leveraged ETF performed in the early 2000s, when the index lost 83% of its value from peak to trough during the dot-com bust? Fun (and scary) fact: a $10,000 portfolio invested in a hypothetical TQQQ-like vehicle in late March 2000 would have been worth a large cup of premium coffee - $6.75, to be more precise - by October 2002.

But knowing how to deploy leverage strategically can be the key to rather simply beat the market in absolute and risk-adjusted terms over time. The secret is knowing when to move out of the way when the markets begin to turn sour. 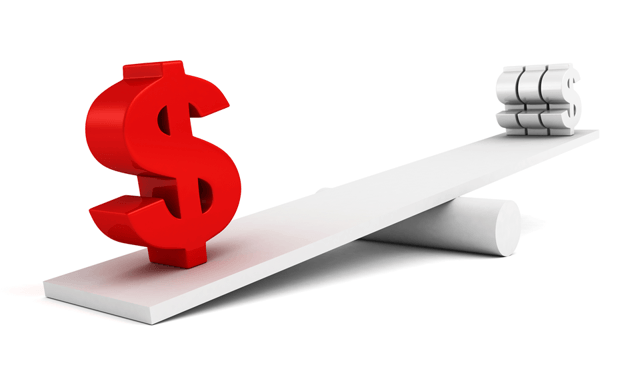 A quick primer on TQQQ

Anyone considering an investment in TQQQ would be well served by first reading the countless cautionary reports that have been written on leveraged ETFs. ProShares itself enumerates, in its prospectus, several investment risks associated with leverage, counterparty, liquidity, compounding, correlation, rebalancing and others. But also be sure to take a look at my "LETFs can be your friends too" article for a more balanced view on these instruments. 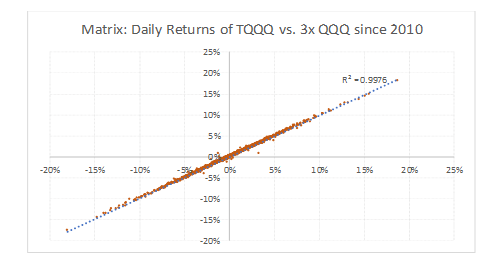 TQQQ seeks to replicate the daily return of the Nasdaq 100 index leveraged to a factor of three. For example, if the Nasdaq is up 1% for the day, TQQQ should be up 3%, plus or minus a small margin of tracking error. On the other hand, if the Nasdaq is down 1% on a given trading day, TQQQ would be roughly 3% lower. The leveraged ETF has done a solid job at meeting its key mandate, as the chart above depicts. At an r-squared of nearly 100%, TQQQ's daily returns have consistently reached three times that of the benchmark.

It is worth noting that TQQQ charges a management fee of 0.95% that looks high for an ETF, although maybe not as much if one adjusts for the leverage factor (i.e., the equivalent of 32 bps de-levered). The fund trades an average volume of 17 million shares per day, providing plenty of intraday liquidity.

In my view, TQQQ can be a great tool for turning a plain Nasdaq 100 investment into a market-beating strategy. I discussed the system in my recent article, "UPRO: Leveraging Stocks To Boost Returns And Curb Risk".

The approach involves (1) holding 80% of the portfolio in a stock index and 20% in cash most of the time, then (2) using the cash to buy a 3x leveraged ETF every time that the index is within five percentage points of its all-time peak, effectively shifting the entire portfolio from an 80% to a 120% investment in the Nasdaq 100. I have named this strategy "buy high, sell low". The following paragraph explains the rationale behind the plan:

Buying (or leveraging up) at or near market peaks has historically produced substantially better risk-adjusted returns because volatility tends to be lower in generally strong market environments. The lower the volatility, holding all other variables steady, the better the risk-adjusted return of an investment.

Unfortunately, I cannot run a sensible test on TQQQ to observe the efficacy of the approach described above because the fund has been around for less than ten years. It seems unfair to assess the performance of a leveraged strategy during the longest bull market in history. However, I can synthetically recreate the performance of an investment that uses a TQQQ-like instrument by simply leveraging up the daily returns of the QQQ by a factor of three, compounding it, then "bleeding out" the equivalent of 95 bps of management fees per year.

The chart and table below illustrate the results of a backtest on a $1,000 hypothetical portfolio invested in early 1999 using the "buy high, sell low" strategy described above. I then compare the results to a plain-vanilla, buy-and-hold investment in the Nasdaq 100. 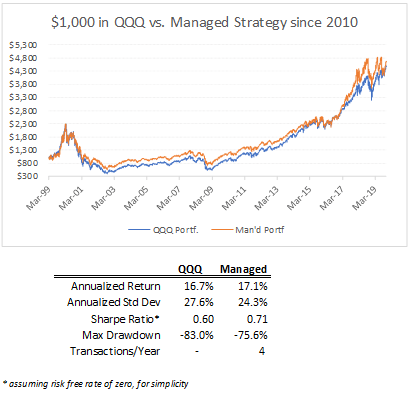 There isn't a single performance metric in the backtest above that doesn't look better using the "buy high, sell low" approach. For starters, the managed portfolio would have produced annual returns of 17.1% that are slightly better than QQQ's 16.7%. But much more importantly, levering up near all-time highs and de-levering off peaks would have reduced the portfolio's volatility by a significant amount: standard deviation of 24.3% vs. QQQ's 27.6%. Better yet, adjusting the portfolio allocation to and from cash and TQQQ as needed would have required only an average of four transactions per year - barely a high-frequency approach.

Also note that the managed strategy would have produced a less menacing peak-to-trough of 75.6% between 2000 and 2002 that, to be fair, would have still been very painful. In moments of distress, particularly during the Nasdaq 100's "lost decade" of 2000-2010, outperforming the market by a respectable margin and preserving some capital can be highly desirable. 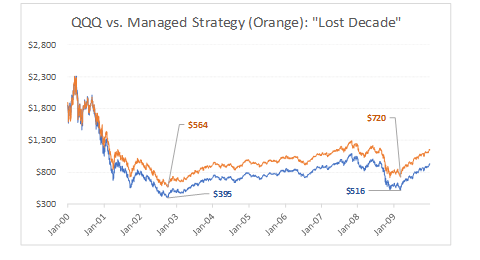 Leverage is a double-edged sword that can destroy a portfolio, but that can also be used to beat the market if applied sensibly. While many (if not most) market participants would ordinarily think of TQQQ as a tool for short-term "speculation on steroids", I would rather use it as an instrument for producing better risk-adjusted returns over longer periods of time.

"Thinking outside the box" is what I try to do everyday alongside my Storm-Resistant Growth (or SRG) premium community on Seeking Alpha. Since 2017, I have been working diligently to generate market-like returns with lower risk through multi-asset class diversification. To become a member of this community and further explore the investment opportunities, click here to take advantage of the 14-day free trial today.