The stock market as a whole performed well in October, as it has for most of the year. The REIT sector continued its stellar 2019 performance with yet another positive monthly return (+2.11%). This brings the average equity REIT to an impressive return of 29.79% over the first ten months of 2019. The REIT sector didn’t quite keep up with the NASDAQ (+3.66%), but outpaced the S&P 500 (+2.04%) and Dow Jones Industrial Average (+0.48%) in October. The market cap weighted Vanguard Real Estate ETF (VNQ) underperformed the average REIT again in October (+1.13% vs. +2.11%), falling slightly behind year-to-date after the first 10 months of the year (+29.6% vs. +29.79%). The spread between the FFO multiples of large cap REITs (22.3x) and small cap REITs (12.9x) widened meaningfully in October as multiples rose an average of 0.1 turn for large caps, but fell 0.6 turns for small caps. In this monthly publication, I will provide REIT data on numerous metrics to help readers identify which property types and individual securities currently offer the best opportunities to achieve their investment goals. 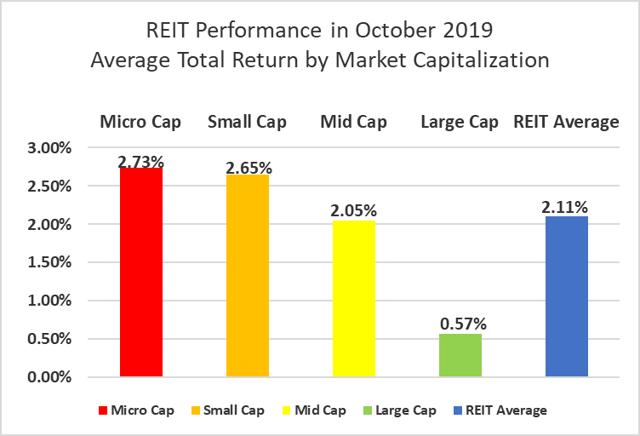 In October, REIT performance and market cap had a strong negative correlation, after a similarly negative correlation in September. Although REITs of all sizes had positive returns, large cap REITs (+0.57%) significantly underperformed their small peers, which all averaged returns of at least 2%. Micro cap REITs led with a 2.73% average return in October, followed closely by a 2.65% return by small caps. Micro cap REITs (+38.68%) have thus far in 2019 outperformed large cap REITs (+31.97%) by 671 basis points and mid cap REITs (26.43%) by 1,225 basis points. Mid cap REITs slightly underperformed in October (+2.05% vs. 2.11%) and remain well behind their peers year to date (+26.43% vs. 29.79%). 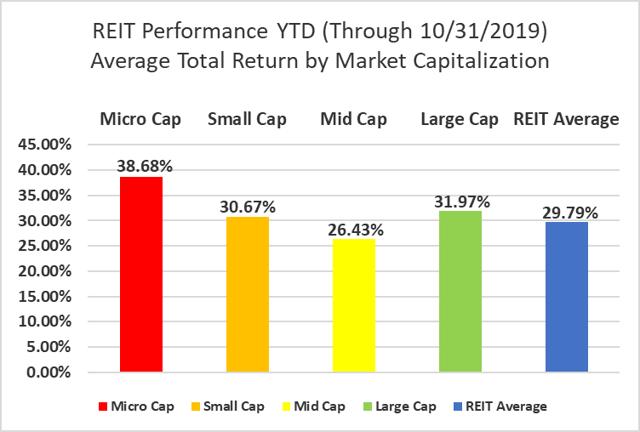 65% of REIT property types averaged a positive total return in October, with a 17.39% total return spread between the best and worst performing property types. Manufactured Housing (+6.77%) and Shopping Centers (+5.55%) had the best average returns. Manufactured Housing was led by the 9.57% October return of Sun Communities (SUI), which brings its year-to-date total return to an impressive 62.7%. Corrections (-10.62%) was the only property type to experience a double-digit decline in October, as the private prison REITs and the banks that lend to them continue to be subjected to an aggressive disinformation campaign by political activists who wish to eliminate the private prison industry. 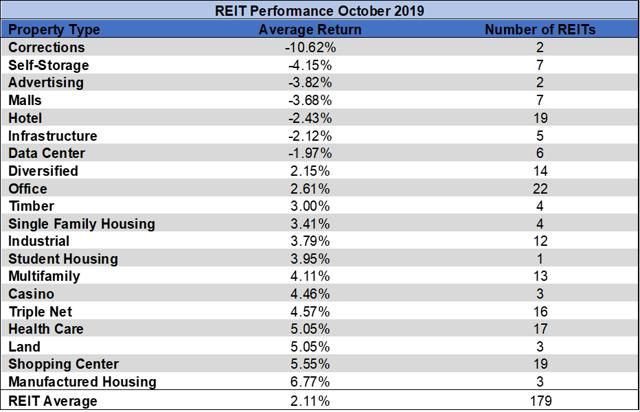 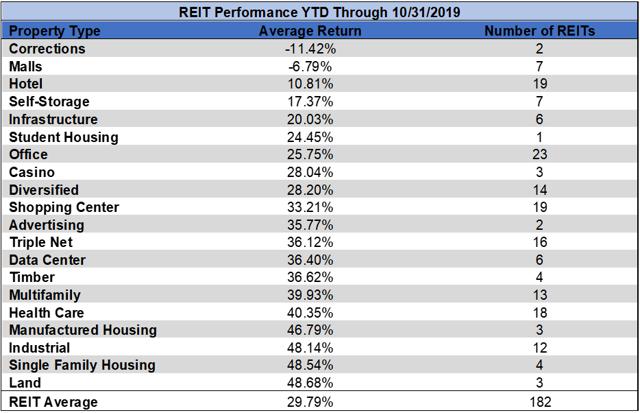 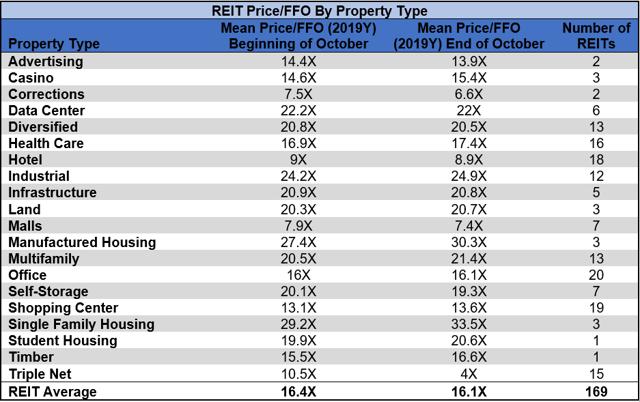 On October 30th, health care REIT HCP (HCP) announced that it was changing its name to Healthpeak Properties. This name change was coupled with a change in the stock ticker to PEAK, which took effect on November 5th. It was also announced that Chief Investment Officer Scott Brinker will be promoted to president and will now assume full operational oversight of Healthpeak Properties’ senior housing, medical office and life science segments. Healthpeak additionally made multiple portfolio transaction announcements as well on the 30th. PEAK entered into a $790M joint venture in which PEAK will sell to a sovereign wealth fund a 46.5% stake in a 19-property portfolio operated by Brookdale Senior Living (BKD). PEAK also agreed to sell its 49% interest in its U.K. holdings to Omega Healthcare Investors (OHI) for gross proceeds of $232 million (net proceeds after debt repayment of about $90 million).

69.83% of REITs had a positive return in October, with 91.76% in the black year to date. During the first ten months of last year, the average REIT had a -2.28% return, whereas this year the average REIT has seen a significantly better total return (+29.79%). 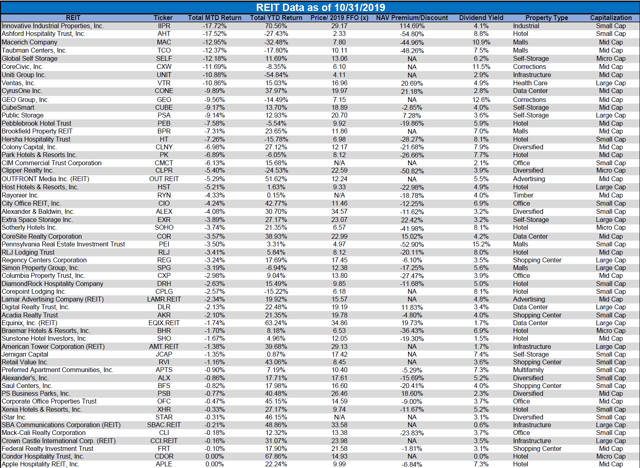 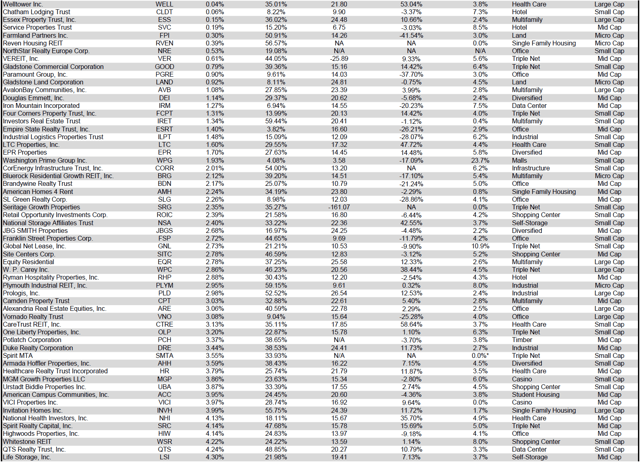 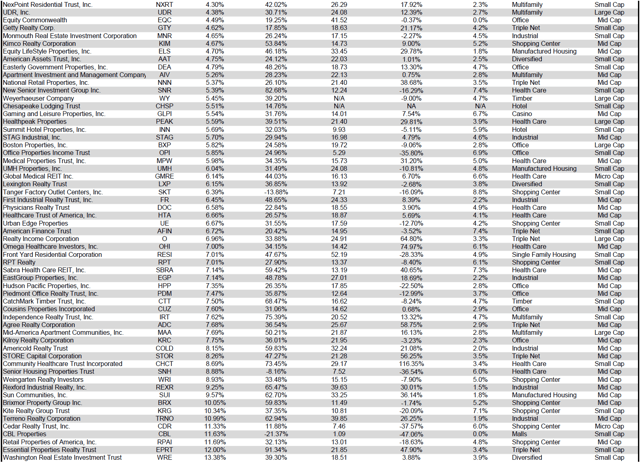 Dividend yield is an important component of a REIT's total return. The particularly high dividend yields of the REIT sector are, for many investors, the primary reason for investment in this sector. As many REITs are currently trading at share prices well below their NAV, yields are currently quite high for many REITs within the sector. Although a particularly high yield for a REIT may sometimes reflect a disproportionately high risk, there exist opportunities in some cases to capitalize on dividend yields that are sufficiently attractive to justify the underlying risks of the investment. I have included below a table ranking equity REITs from highest dividend yield (as of 10/31/2019) to lowest dividend yield. 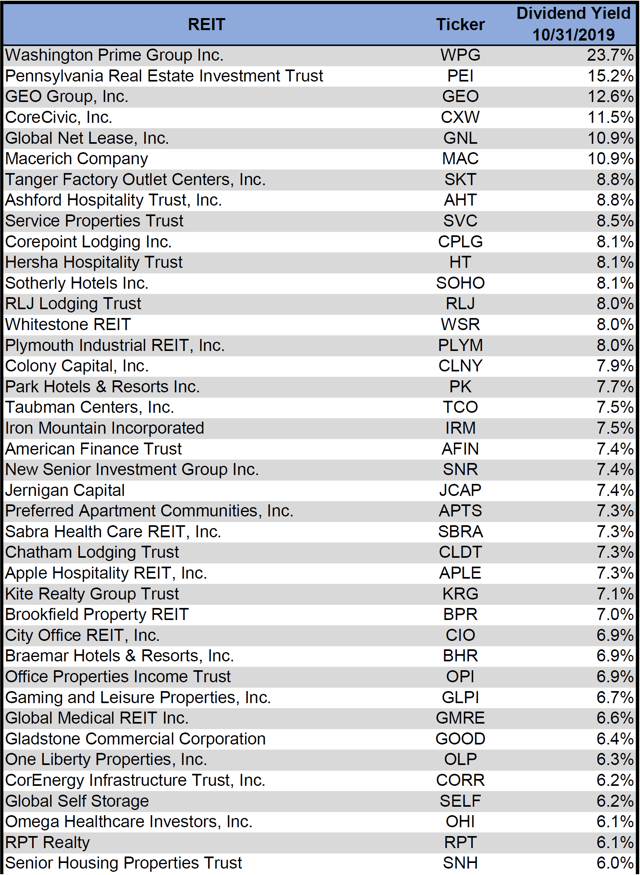 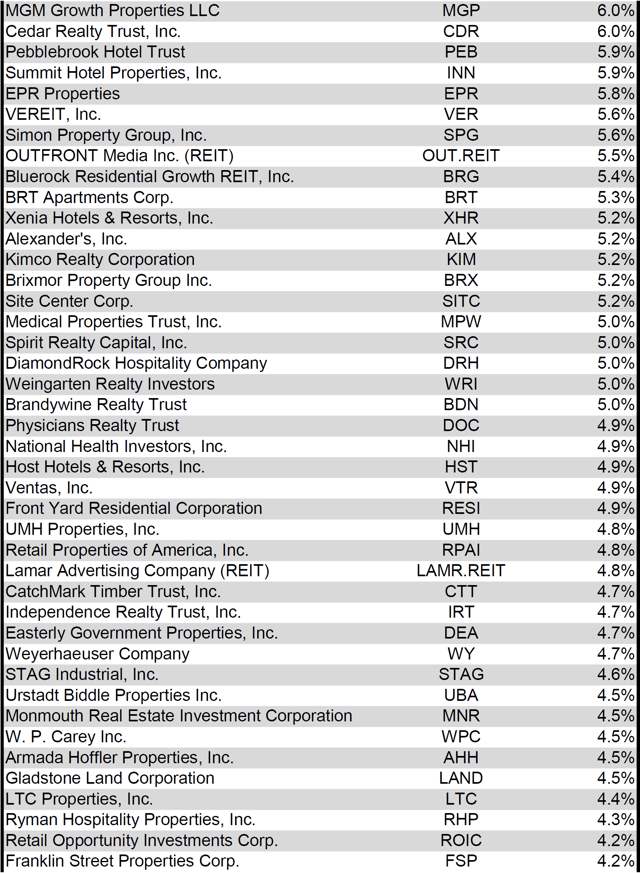 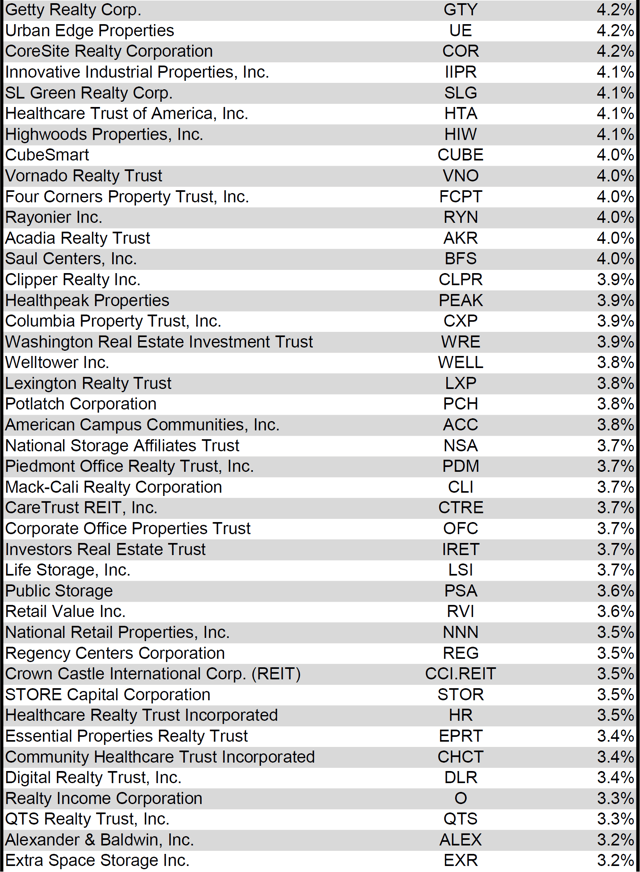 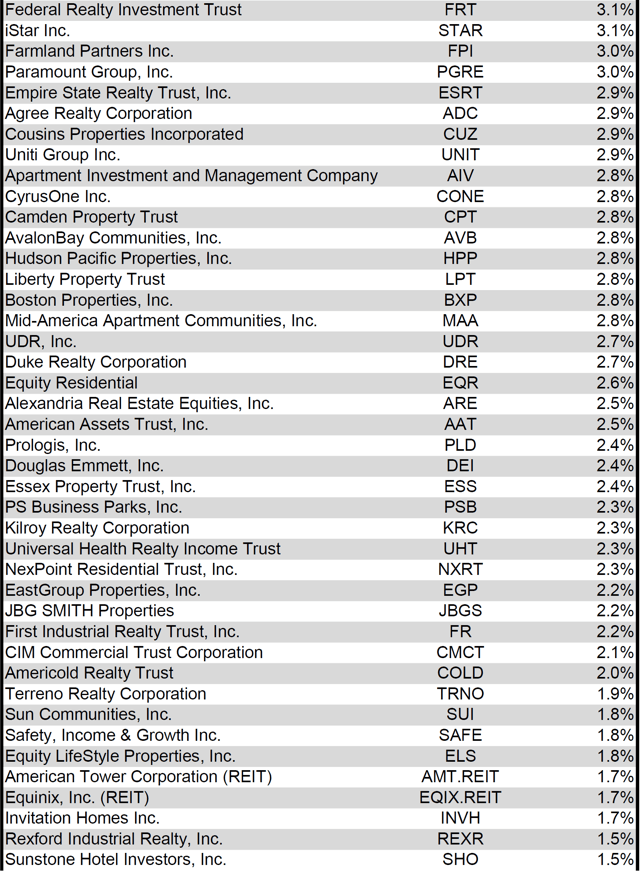 The REIT sector median discount to net asset value narrowed again in October from 2.3% to 1.4%.

The median NAV premium of Health Care REITs continued to rise, moving from 28.5% to 30.6% during October. The median NAV premium of Self Storage REITs narrowed sharply again from 15.7% to 8.6%. Other Retail (for example: free-standing net lease retail) now trades at the 2nd highest median premium of 18.8%, up from 15.7% the prior month. Community Healthcare Trust (CHCT) was already trading at nearly the largest premium of any REIT (IIPR trades at a slightly larger premium of 114.7%), but has seen continued price appreciation and is now trading at more than twice (+114.5%) its net asset value. 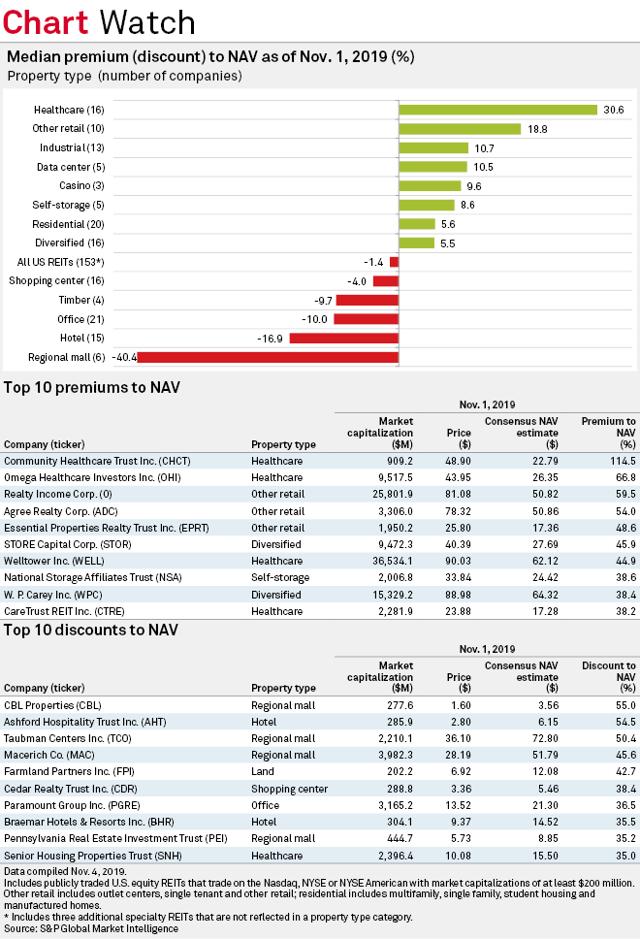 The large cap REIT premium (relative to small cap REITs) grew larger and larger throughout most of 2019, before declining modestly in September. By the end of October, however, this premium reached a new 2019 peak. Investors are now paying on average 73% more for each dollar of FFO/share to buy large cap REITs than small cap REITs (22.3x/12.9x - 1 = 72.9%).

The average small cap REIT trades at a multiple of 12.9x FFO, whereas 92% of large cap REITs trade at multiples higher than 15x. While there are certainly advantages to the economies of scale of many larger REITs, such as lower G&A costs as a percentage of total revenue or access to slightly lower interest rates on unsecured debt, the magnitude of such advantages is tiny relative to the magnitude of the multiple premium at which nearly all large cap REITs currently trade. It is also worth noting that there are advantages to small and micro cap REITs, such as the ability to grow much more quickly and the potential to see substantial price appreciation if acquired. Small REITs are significantly more likely to be acquired than their larger peers, particularly given the tremendous pricing disparity that exists presently. While there are a few large cap REITs that still trade at appropriate or discounted multiples, the vast majority of REITs that currently offer an attractive entry point are mid-cap or smaller. By carefully analyzing REIT data and industry trends, active investors have the opportunity to outperform ETFs.

Disclosure: I am/we are long CBL. I wrote this article myself, and it expresses my own opinions. I am not receiving compensation for it (other than from Seeking Alpha). I have no business relationship with any company whose stock is mentioned in this article.

Additional disclosure: 2nd Market Capital and its affiliated accounts are long CBL. I am personally long CBL. This article is provided for informational purposes only. It is not a recommendation to buy or sell any security and is strictly the opinion of the writer. Information contained in this article is impersonal and not tailored to the investment needs of any particular person. It does not constitute a recommendation that any particular security or strategy is suitable for a specific person. Investing in publicly held securities is speculative and involves risk, including the possible loss of principal. The reader must determine whether any investment is suitable and accepts responsibility for their investment decisions. Simon Bowler is an investment advisor representative of 2MCAC, a Wisconsin registered investment advisor. Positive comments made by others should not be construed as an endorsement of the writer's abilities as an investment advisor representative. Commentary may contain forward looking statements which are by definition uncertain. Actual results may differ materially from our forecasts or estimations, and 2MCAC and its affiliates cannot be held liable for the use of and reliance upon the opinions, estimates, forecasts and findings in this article. Although the statements of fact and data in this report have been obtained from sources believed to be reliable, 2MCAC does not guarantee their accuracy and assumes no liability or responsibility for any omissions/errors.