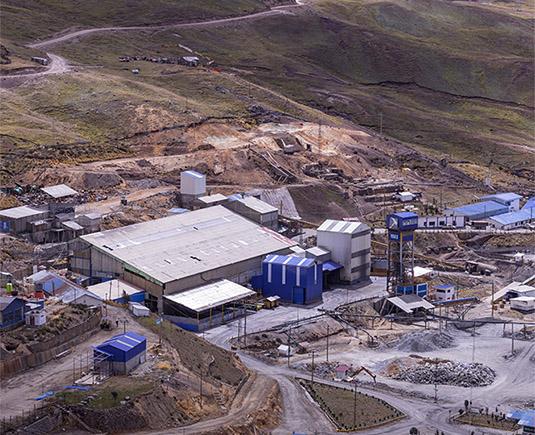 The Vancouver-based Pan American Silver Corp. (NASDAQ:PAAS) has long been considered as a silver miner, and it was, in fact, precisely one silver miner up until the company completed a merger-acquisition with Tahoe Resources (TAHO) on February 22, 2019. This acquisition changed the balance definitely toward gold, and the recent third-quarter earnings results are demonstrating why.

This acquisition was significant for the company, and the process of merging is not about to end soon. The Timmins mines are still for sale, and debt is not high.

However, these third-quarter results are presenting a good picture of what the new company will achieve in the next few years.

As I was expecting, the stock price dropped significantly after February 22 due to the Tahoe acquisition and reached a low of $10.50 in June.

But, since then, and bolstered by the prices of gold and silver that turned bullish, the stock began its steady ascent and reached a price of about $19 per share in September or an 80% jump in just a little over three months.

In my precedent article, I was cautious about the new PAAS valuation. I recommended taking some profit off the table due to an overbought situation that could produce a significant retracement.

It is what happened when gold and silver prices showed some signs of fatigue. Thus, PAAS needed an excellent third quarter, and the company delivered.

Even better, revenues were at a record of $352.187 million and could have been even higher, which is a good omen for Q4.

Michael Steinmann, the CEO, said in the conference call:

Revenue in the quarter was $352 million, primarily reflecting increased gold production and higher gold and silver prices. Revenue estimated at $17.8 million was not realized in Q3 due to timing of shipments, resulting in inventory build. We expect the revenue associated with that metal inventory will be realized during Q4.

The investment thesis is quite apparent here. Pan American Silver is a solid company that shows the right profile for a long-term investment in the gold and silver sector.

The potential of a significant increase, down the road, with the resumption of the Escobal silver mine in Guatemala, is one element that should motivate investors. However, while I believe Escobal mine will produce again, I think it will take over a year at the least before the Guatemala court will make it possible.

Finally, as I have explained many times, it is essential to trade short term about 30% of your position and take advantage of the volatility.

Silver and Gold Production Details For The Third Quarter of 2019

The total production of the new company created from the merger-acquisition is now in plain view starting 3Q'19, which is the first full quarter results. Gold production was 150.2K Au Oz and silver production was 6.665 M Ag Oz.

We can see that Pan American Silver is now mainly a gold producer. However, it will change again when the company sells the Timmins mines, which represent a gold production of 38.3K Au Oz.

In summary, our operating assets continue to perform very well and we are on track to meet our revised production guidance from August 7, but at lower costs. Our financial position continues to strengthen, enabling us to advance growth projects in our portfolio and to focus on brownfield exploration, especially at La Colorada. 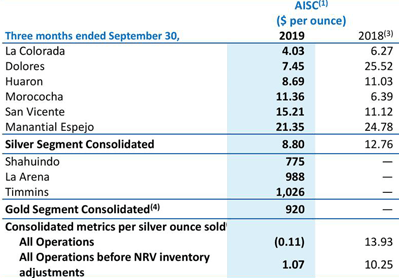 The Canadian company reported third-quarter earnings of $37.7 million ($0.18 basic earnings per share) that reflects strong mine operating earnings and an increase in investment income.

Net income was reduced by a one-time, non-cash $15.6 million adjustment for depletion and amortization expenses related to the reclassification of Timmins Mines. Adjusted earnings were $74.2 million ($0.35 basic adjusted income per share).

Revenue was $352.19 million this quarter, up 24.5% sequentially. However, revenues include the Timmins mines this quarter, which were classified as "held for sale" last quarter. Thus, the third-quarter income should be compared with $340.45 million during in 2Q'19 (which includes Timmins Mines).

Net cash generated from operations was $81.9 million this quarter.

Michael Steinmann, the CEO, said in the conference call:

Due to changes in market conditions and effective in Q3 2019, the Bell Creek and Timmins West mines are no longer classified as held for sale. As a result, the Timmins assets and liabilities are no longer presented separately on the company's September 30, 2019 balance sheet. And the net income generated by payments for the 3 months and 9 months are reflected on the company's income statement in the normal course.

Free cash flow is not a significant component for the company due mainly to the fact that it is still in the process of integrating Tahoe Resources.

However, the graph above indicates that the company managed a gain of $32.06 million in 3Q'19.

Yearly free cash flow is a loss of $34.91 million due to the Tahoe acquisition. But I am confident that it will turn positive before the end of 2019, especially with the metals prices that are significant starting Q3.

Total debt was about $360.5 million, which includes $45.5 million in lease liabilities.

Note: The company has amended and extended its revolving credit facility from $200 million to $500 million, which matures on February 1, 2023.

Pan American Silver got the story right. The third-quarter results were what the market needed precisely to get excited again. Higher revenues, higher free cash flow, and the potential new record in revenue next quarter. Better, the company presents a future explosive potential with the Escobal silver mine.

It is not a surprise to see PAAS slowly climbing again to $19, but commodity prices are not as supportive as they were up until September. Then, the question is, what should we do?

PAAS, in my opinion, is forming what we generally call a cup and handle pattern.

A cup and handle pattern presents a shape of a "U," and the handle has a slight downward drift. The pattern is considered a bullish continuation pattern and is generally viewed as a buying opportunity.

We are trading at the end of the "cup" with a line resistance at around $19 (double top). Consequently, PAAS may likely retrace (handle) to about $16.25.

It is, of course, not as simple as some believe it is, and the pattern described above may not be accurate if the gold and silver prices turn strongly bearish or bullish.

Note: If you find value in this article and would like to encourage such continued efforts, please click the "Like" button below as a vote of support. Thanks!

Fun Trading
20.66K Followers
Author of The Gold And Oil Corner
As an experienced investor, I will help you stay on task more efficiently.

Disclosure: I/we have no positions in any stocks mentioned, but may initiate a long position in PAAS over the next 72 hours. I wrote this article myself, and it expresses my own opinions. I am not receiving compensation for it (other than from Seeking Alpha). I have no business relationship with any company whose stock is mentioned in this article.