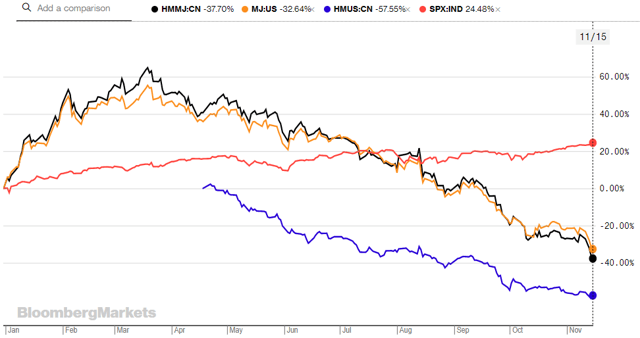 Canada: The Canadian cannabis sector was destroyed last week after companies reported disappointing results. Canopy Growth (CGC) and Aurora Cannabis (ACB) both dropped ~30% after reporting big revenue drop and lackluster outlook. Supreme (OTCQX:SPRWF) dropped 18% after reporting a 40% revenue drop. OrganiGram (OGI) plunged a whopping 37% after the company announced weaker-than-expected Q4 revenue. Emerald (EMHTF) lost another 32%, and the stock has lost 83% of its value this year, proving our long-time negative thesis on the stock. Among all the companies that reported earnings, MediPharm (OTCQX:MEDIF) stood out as the sole bright spot, but the stock market punished the stock regardless. 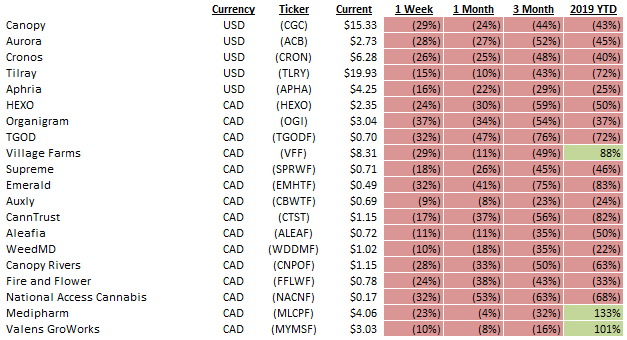 The U.S. and International: Curaleaf (OTCPK:CURLF) jumped 17% without major news, a clear contrast to the Canadian sector. CV Sciences (OTCQB:CVSI) dropped another 21% after reporting disappointing Q3 results in the prior week. Charlotte's Web (OTCQX:CWBHF) dropped 7% after a lackluster quarter with no growth. Cresco Labs (OTCQX:CRLBF) dropped 13% after repricing its Origin House deal. MedMen (OTCQB:MMNFF) fell 10%, and it announced on Friday night a layoff of 190 people to improve profitability. 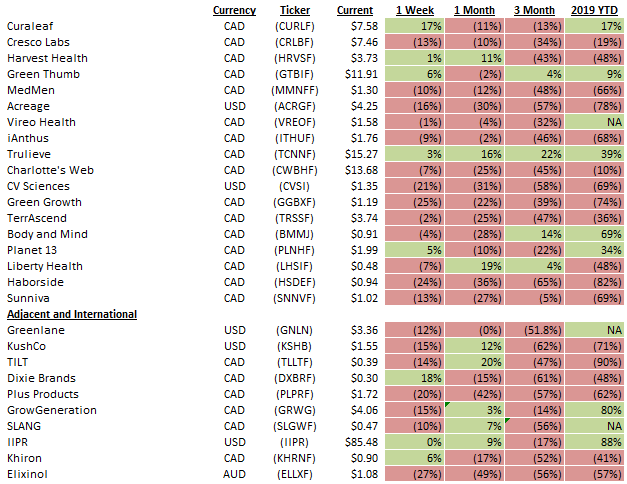 Last week saw one of the most brutal selloffs in the Canadian cannabis sector since it came into existence in 2017. There have been two other similar pullbacks in recent history, as analyzed by us in February 2018 and October 2018. However, the previous collapses were driven mostly by sentiment and macro events, whereas last week's crash was more fundamentally-driven. As a number of LPs in Canada reported earnings, the market is reassessing the near-term and long-term potential of cannabis companies in Canada.

Overall, the results reported by most of the LPs were extremely disappointing. Industry bellwethers Canopy and Aurora reported a sequential decline in revenues of 15% and 24%, respectively, this quarter. The declines were driven by a collapse in prices in Canada, offset somewhat by stronger margins overseas. In Canopy's case, the company had to record a return provision of C$33 million, after a similar charge of C$8 million in the previous quarter, to account for oil and softgel products that consumers didn't want. Aurora, on the other hand, began downsizing by suspending construction at its Nordic 2 and Aurora Sun greenhouses immediately to preserve its dwindling cash balance. We precisely predicted the overbuilding by Aurora two weeks ago in "Aurora Cannabis Is Building Too Many Greenhouses" as we saw that the writing was on the wall based on market dynamics in Canada. We felt that Aurora's management took too long to make the decision, but ultimately, they made the right call to avoid further oversupply in a struggling market.

At the end of the day, investors have had numerous warning signs. We have repeatedly told investors to avoid Canada and focus on the U.S. sector due to its growth potential and market size. The Canadian market is oversupplied with a challenging near-term growth outlook. We don't see major catalysts in Canada, and we believe the next few quarters will remain difficult for the industry. More corporate failures and insolvencies will likely emerge with layoffs and facility shutdowns. Although these developments are necessary for an industry that lacked the foresight to be nimble, led by players like Aurora, the near-term impact will be severe and uncertain. We continue to avoid Canada and are starting to see pockets of hope in the U.S. sector. The only positive trend we are seeing in Canada is the extraction space led by MediPharm and Valens GroWorks (OTCQB:VGWCF). However, the overwhelmingly negative sentiment overruled their recent momentum. Investors shouldn't try to bottom-fish in Canada yet as the situation could get a lot worse before it gets any better.

Cornerstone Investments
23.08K Followers
We are your best guide to cannabis investing. Read our 2021 Cannabis Sector Outlook here. We also provide in-depth industry analysis and coverage of 70+ cannabis stocks to help you get started.