On one hand, it is stuck in the heavily-bleeding, declining sand/proppant sector — even though Solaris only handles sand at the well-site rather than developing sand mines.

Additionally, non-public Class B shareholders still own about a third of the company.

On the other hand, dividend-seeking investors may like Solaris’ 3.6% yield — unusual in oilfield services. Moreover, as a small, focused company with little debt, several innovations, and enough cash ($51 million, 10% of the asset base), Solaris could easily become an acquisition target.

Solaris is headquartered in Houston, Texas, and has 380 full-time employees. The company provides management systems for unloading, storing, and delivering chemicals and proppant (sand mainly) to well sites in all of the major U.S. unconventional basins: Permian, Eagle Ford, STACK/SCOOP, Marcellus, Utica, Haynesville, Rockies, and Bakken. Founded in 2014, its Class A shares went public in 2017. Its Class B shares are not publicly available. 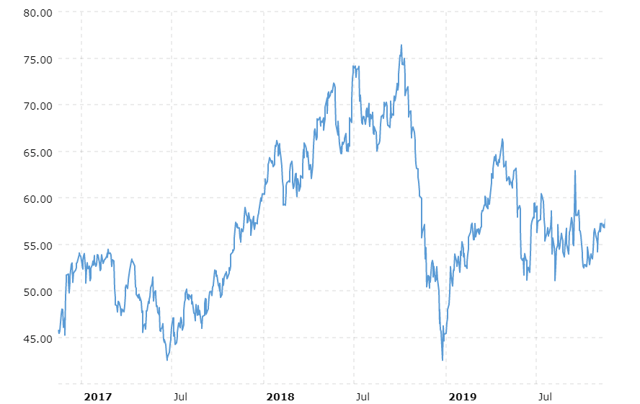 In the third quarter of 2019, Solaris had revenue of $59.6 million, net income of $19.1 million, and net income attributable to Solaris after non-controlling interests of $11.4 million or $0.36 per Class A share. This is down from the same quarter a year ago, when net income per Class A common was $0.49.

Solaris estimates it has a one-third share of the U.S. wellsite proppant storage market.

Unlike U.S. Silica or other sand companies such as Hi-Crush, Smart Sand (SND), or Covia (CVIA), Solaris does not own sand mines and so is not directly exposed to fluctuations in sand prices.

Bigger competitors like Schlumberger (SLB), Halliburton (HAL), Baker Hughes (BKR), Patterson-UTI (PTEN), Nabors (NBR), and National Oilwell Varco (NOV) offer a large spectrum of oilfield services and may be of more interest to producers who would prefer not to coordinate numerous vendors, particularly since Solaris does not own sand mines.

Other competitors in the general oilfield services sector have been severely financially challenged by the drilling downturn. This includes many of Solaris’ service and logistics customers. 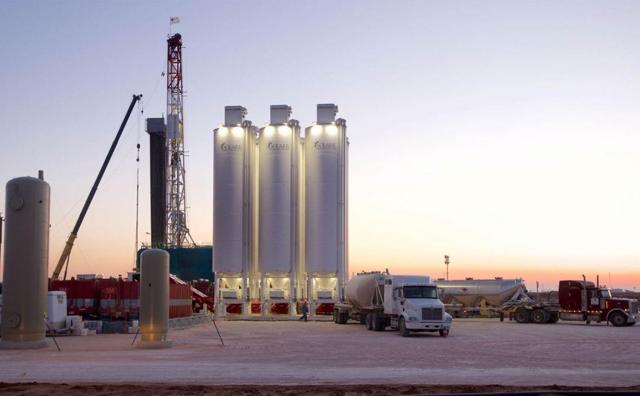 Like others, Solaris has reined in capital spending. In 2019, it expects to spend $40 million or less compared to an original plan of $40-$50 million.

The company’s customers include a wide range of producers from Exxon Mobil (XOM) to Southwestern Energy (SWN) as well as sand and service companies from Schlumberger to private Atlas Sand.

During startup, Solaris was backed by private equity firm Yorktown. At its initial public offering in May 2017, a large part of the ownership was retained by Yorktown and by the company’s founder in the form of Class B shares, which have voting rights equal to one share. Class B ownership now represents 33% of Solaris’ equity.

The company’s beta is 1.71, representing much higher volatility than the overall market but in line with its small size and position in a commodity sector.

The company’s ratio of enterprise value to EBITDA is 3.4, suggesting a bargain; book value per share of $8.20 is less than the market price, also a favorable indication.

Mean analyst rating from eleven analysts is a 1.8, or “buy,” leaning toward “strong buy."

The eight largest institutional holders on September 29, 2019 were: Fidelity/FMR at 9.5%, BlackRock at 6.9%, Vanguard at 5.0%, Janus Henderson at 4.6%, Adage Capital Partners at 4.5%, Russell Investment Group at 3.9%, Segall Bryant & Hamill at 3.8%, and Capital World Investors at 3.7%. Some institutional fund holdings represent index fund investments that match the overall market.

The biggest factor in the oil and gas market at present, after prices, is Saudi Aramco’s (ARMCO) initial public offering. While this $1.5+ trillion valuation does not change oil supply, it sucks away the market's appetite for energy stocks.

Solaris positions itself as a tech company, but similar to the way WeWork's (WE) business is more real estate than tech, in reality, Solaris depends on leasing its equipment within the volatile commodity markets of sand and oil.

Also of concern, the company has weak governance ratings.

Solaris' major exposure is as a second or even third derivative of U.S. and global oil price risk. Investors demanded more returns to shareholders. Oil and gas producers responded, and continue to do so, by substantially cutting drilling budgets. Along with a move towards up-spacing (fewer wells per acre), smaller budgets means much less demand for sand (second derivative) and so less need for sand-handling equipment (third derivative.)

Due to the poor current and expected future sand and oilfield services markets, Solaris is not recommended to growth-seeking investors. This is also evidenced by the drop in analysts’ average expected EPS for 2020.

Additionally, the sizable voting clout of the Class B shareholders means Class A public investors may have conflicts, or at a minimum less-than-typical voice, in company operations.

Dividend-seeking investors may be attracted to the company’s 3.6% dividend and low debt levels.

Despite the short interest, the company may also appeal to those who think it could become an acquisition target for a larger company such as Baker Hughes, Halliburton, or Schlumberger.

I hope you enjoyed this piece. I run a Marketplace service called Econ-Based Energy Investing which features my best ideas from the energy space, a group of more than 400 public companies. I offer three different portfolios for your consideration, as well as weekly in-depth articles, including a mix of portfolio reviews and company-specific deep dives. I'm bringing my experience from decades in the industry to this service to help investors deal with the ups and down of the energy sector. Interested? Get started here with a two-week free trial.

Disclosure: I am/we are long BKR. I wrote this article myself, and it expresses my own opinions. I am not receiving compensation for it (other than from Seeking Alpha). I have no business relationship with any company whose stock is mentioned in this article.