After quietly outperforming the market all year, communications platform-as-a-service company Bandwidth (NASDAQ:BAND) - a lesser-known, lower-profile competitor to industry heavyweight Twilio (TWLO) - has been one of the market's biggest losers of the third quarter. Once praised for being more profitable than Twilio and delivering lower but more reliable growth rates, Bandwidth shares have shed more than 40% from year-to-date highs above $90, with losses deepening after the company's recent third-quarter earnings release. Now, Bandwidth's gains year-to-date are barely in line with the broader S&P 500, losing out to many of its software peers.

With the market marching toward new all-time highs every day and with most of the software sector returning to frothy valuation multiples, I like Bandwidth for its combination of value, reasonable growth, and solid profit margins (though a pursuit of stronger growth this year and higher sales and marketing expenses have pushed down Bandwidth's cash flows and EBITDA this year). With shares having fallen so sharply since September, I think it's a good time for investors to review the bullish case for this stock.

Moreover, it's more than likely that the market heavily overreacted to Bandwidth's third-quarter update, which included a downside revenue guidance in the fourth quarter that mostly concerned deal timing, not underlying demand. With this in mind (we'll dive into the details shortly), the steep drop in Bandwidth's valuation is incredibly appealing.

At present share prices around $53, Bandwidth carries a market cap of $1.25 billion. After we net off the $192.4 million cash on Bandwidth's third-quarter balance sheet, we are left with an enterprise value of $1.06 billion.

For the following fiscal year FY20, Wall Street analysts are expecting consensus revenues of $267.6 million (per Yahoo Finance), representing +17% y/y growth over consensus FY19 revenues of $229.2 million (and considering Bandwidth just grew revenues at a 20% y/y clip this quarter, and expects some deals to push from Q4 into Q1, this estimate still seems quite light). Using this revenue estimate, we arrive at a valuation of 4.0x EV/FY20 expected revenues for Bandwidth.

Bear in mind that Bandwidth traded at a ~7x revenue multiple last quarter. Have we really learned anything new about the business that makes it worth about half of what it was previously worth? Note as well that direct competitor Twilio, despite a similar ~30% fall from peak values, is still trading at an 11x forward revenue multiple, as shown in the chart below:

While Twilio's huge ~75% y/y growth rate (though without M&A, this growth rate pares down to only 47% y/y) and gross margin that's about 10 points richer than Bandwidth certainly merits a significant premium, I hardly believe Twilio should trade at a ~3x richer multiple than Bandwidth.

In my view, Bandwidth's current valuation leaves bulls with plenty of room for error. I'm updating my price target on Bandwidth to $88, representing a 7x EV/FY20 revenue multiple and 66% upside from current levels. And while we shouldn't bank on M&A to save any stock, it should be noted that Bandwidth's low market cap, near-breakeven margin/FCF profile and steady subscription business make it an attractive takeover candidate for either a larger corporate acquirer looking to break into CPaaS or a private equity firm hunting for scarce technology value deals - which puts a floor on Bandwidth's valuation.

Why we shouldn't be worried about Bandwidth's growth

By far one of the biggest issues weighing on Bandwidth shares at the moment is its disappointing fourth-quarter outlook. For the fourth quarter, the company is forecasting $58.4-$58.9 million in revenues - representing 11.5-12.5% y/y growth, and eight points of deceleration at the midpoint relative to this quarter's growth rate. Consensus estimates, meanwhile, were hoping for $66.7 million in revenues - or 27% y/y growth.

Ordinarily, this wide of a spread between guidance and consensus should spark huge concern. But in Bandwidth's case, it provided adequate context behind the shortfall: a lengthening in the time it takes to onboard customers, which pushes revenue out into future quarters but has little bearing on actual underlying customer demand.

Now I'd like to expand our thoughts regarding our financial outlook. As David previewed, we have revised our 2019 annual guidance to reflect several strategic customer wins that are now expected to scale their platform usage later than previously anticipated. This includes the 5-year multimillion dollar agreement with a Fortune 500 company announced as an agreement in principle on last quarter's earnings call and executed in full shortly thereafter. The exclusivity for many services and the breadth of platform engagement required to deliver our full suite of services at scale, all at once, has taken longer than expected and will result in a delayed revenue ramp. Likewise, we're seeing a similar timing impact with extended usage ramps from other sizable wins in this new category of strategic customers David referenced, which, in aggregate, meaningfully contributed to our 2019 annual guidance revision.

If we tack on the $6 million of revenue that Bandwidth estimated it would recapture into Q1 and Q2 of next year (which, by the way, should benefit FY20 full-year growth rates by about 3 points), its fourth-quarter guidance would be just shy of Wall Street's mark.

We note also that thus far, ignoring the future push-out of revenues, Bandwidth's underlying demand trends have been nothing but exceptional. Revenues grew 20% y/y to $60.5 million this quarter, accelerating two points over last quarter's 18% y/y growth rate and beating Wall Street's expectations of $58.8 million (+17% y/y) by a healthy three-point spread. 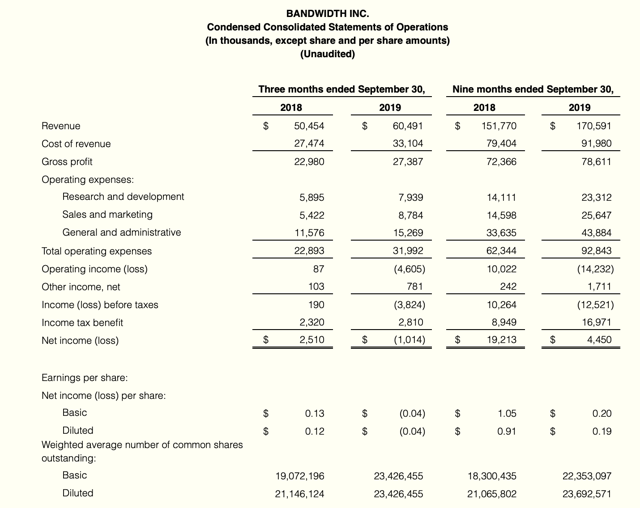 On the profitability side, Bandwidth also notched a two-point improvement in CPaaS gross margins to 47% (helping the company to close some of the margin gap to Twilio). And despite heavier sales and marketing spend that drove operating margins down, Bandwidth's pro forma EPS of -$0.06 still smashed Wall Street expectations of -$0.15.

Bandwidth has become tremendously attractive after falling 40% from peaks and sinking to a below-historical valuation multiple of 4x forward revenues, or about a third of competitor Twilio's valuation. I find few red flags in Bandwidth's most recent earnings update, where the guidance miss was fully explained by revenues that will recapture in FY20. Use the dip to load up on shares.

Gary Alexander
24.56K Followers
With combined experience of covering technology companies on Wall Street and working in Silicon Valley, and serving as an outside adviser to several seed-round startups, Gary Alexander has exposure to many of the themes shaping the industry today. He has been a regular contributor on Seeking Alpha since 2017. He has been quoted in many web publications and his articles are syndicated to company pages in popular trading apps like Robinhood.

Disclosure: I am/we are long BAND. I wrote this article myself, and it expresses my own opinions. I am not receiving compensation for it (other than from Seeking Alpha). I have no business relationship with any company whose stock is mentioned in this article.