Helen of Troy (NASDAQ:HELE) is an impressive company that focuses on developing, designing, importing, and distributing an extensive portfolio of consumer products across the world. The company is divided into three segments: Housewares, Health & Home, and Beauty. Given its current macroeconomic prospects, HELE is starting to face some challenges due to tariffs, tough comparisons, and inflation in other cost inputs. Nevertheless, I think that HELE's proven management team and international ambitions justify a higher price. According to my valuation model, HELE currently has a 15.6% potential upside. Thus, I estimate HELE is an attractive long-term hold at these levels. 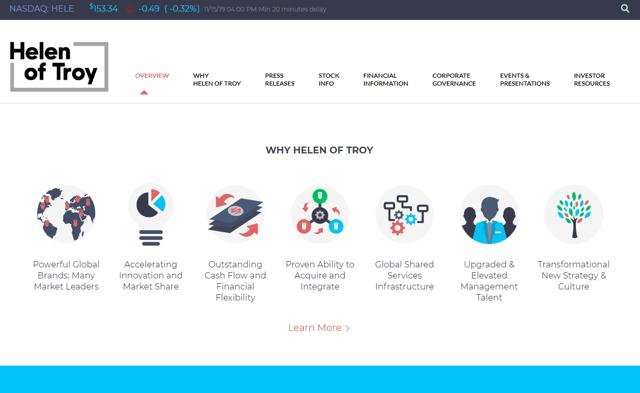 Since HELE is a distributor of consumer products, it is directly exposed to tariffs. So far, HELE has mitigated these headwinds through tariff exemptions that need to be filed yearly with the government. HELE has also raised prices on some of its products. So far, all of this has been a successful coping mechanism. 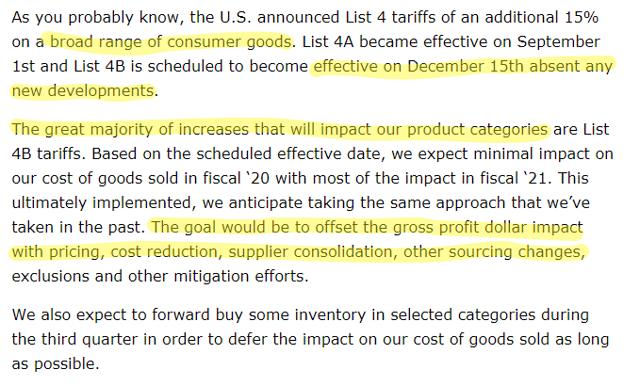 However, HELE's tariff exemptions are likely to expire in 2020. This is because the US government probably wants to incentivize companies to move their production out of China and into the US. This would make granting additional tariff exemptions counterproductive to those objectives. Thus, the most likely scenario is that 2020 will fully include the whole range of tariffs, which should be material. 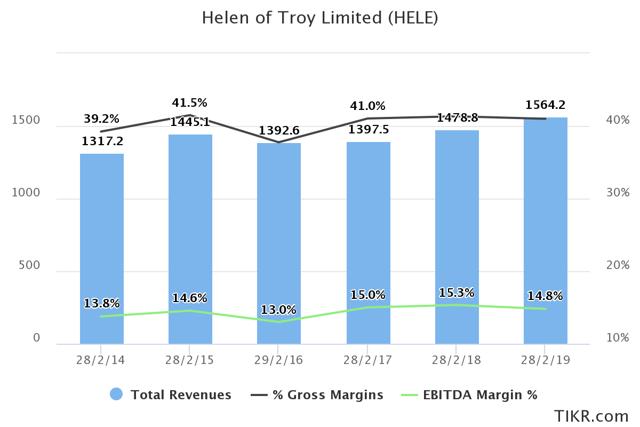 Furthermore, it seems that HELE's recent price increases haven't meaningfully harmed its results so far. However, it's worth mentioning that it might still be too soon to say that this won't eventually affect HELE's long-term growth. You see, over the next few months, more and more companies will continue raising their prices due to tariffs coming into effect. So, it's still entirely possible that the consumer will start having to make tough decisions regarding what products it can and cannot buy. Thus, this can again translate into a further impact on the company's growth prospects. 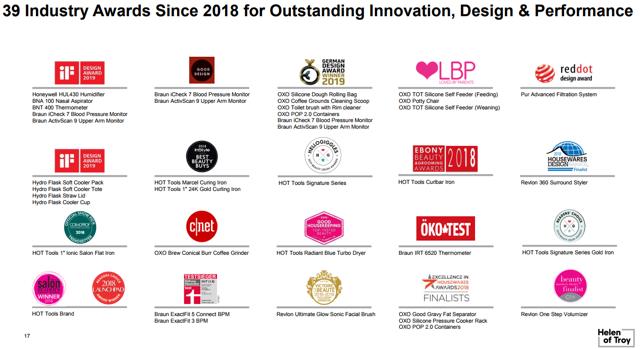 But to be fair, HELE's products do seem to have an excellent reputation with the consumer, as evidenced by the awards shown above. This is probably why, despite some price increases, HELE has been able to get away with them so far. This is because if someone is sick and needs a particular health product, their first consideration probably is quality rather than price. In my view, this seems to be giving HELE some flexibility, especially in its Health & Home division.

Nevertheless, despite all of this, this segment declined 9% YoY. Naturally, most of this "decline" is attributable to a tough comparison with its previous year. For context, this segment grew at 20.3% the past year. Still, it is worth keeping an eye on this segment, in particular for any tariff-induced slowdown signs. 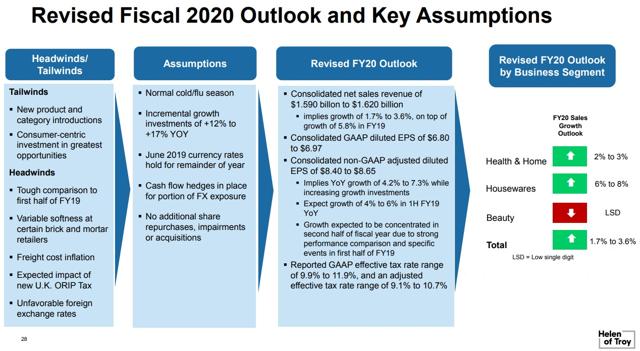 As a whole, there will inevitably be some cost inflation in freight costs. Also, HELE will soon face the impact of the new ORIP tax from the UK. So looking forward to 2020, it does seem like the company's outlook is starting to see some significant headwinds. But despite the gloomy macroeconomic outlook for the company, both the Health & Home and Housewares segments are forecast to grow in 2020.

Despite all of these negatives, I still think that HELE holds some additional upside potential. In particular, I feel HELE's global aspirations and proven management team are its main selling points. For context, according to HELE’s last earnings call, about 20% of HELE's total revenues come from overseas. I believe this offers management a substantial opportunity for long-term growth.

Phase II builds on the accomplishments of Phase I by focusing on eight core strategic priorities. With a focus of doubling down on international and accelerating shared service excellence.

Moreover, management is already taking its first steps into growing the company's international segment. To this end, they have named an "international president" role, which suggests that we should expect results in this area by 2020. For context, management feels that there are approximately $100 million in additional international revenues ready to be taken in 2020. This alone would represent an extra 6.25% growth potential based on HELE's expected 2019 revenues. Hence, I feel its international expansion potential and digital efforts are probably HELE's most exciting opportunities. 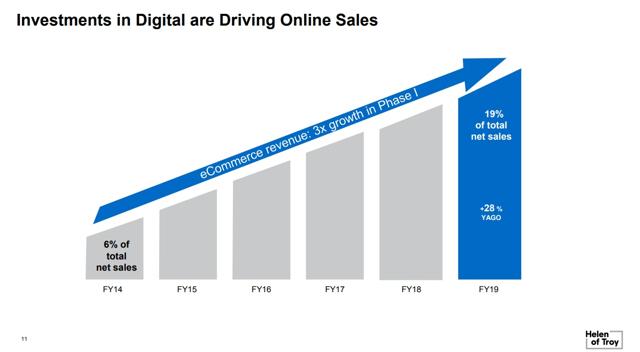 Furthermore, HELE's ambitions will initially focus on the EMEA region. In my view, management should be able to replicate in Europe what it has already achieved in the US. However, I should caution investors that international expansions are not without their risks. This is why I believe that betting on HELE's CEO is so essential. These types of aims generally pose an enormous challenge for most companies. For example, there are many potential pitfalls like logistics, infrastructure, managing costs, and regulations, to name a few. Any of these items can quickly derail expansion expectations.

Phase one was a huge success

Still, let's keep in mind that the current management team has been able to steer HELE successfully over the past five years. In particular, I would highlight the CEO’s pivotal role. In my view, his initial plan, or phase 1, as he calls it, hinged on laying the groundwork for his real goals for the company. Believe it or not, Mr. Mininberg is now just at the beginning of HELE's phase 2, which I believe will realize the full extent of his vision for HELE. 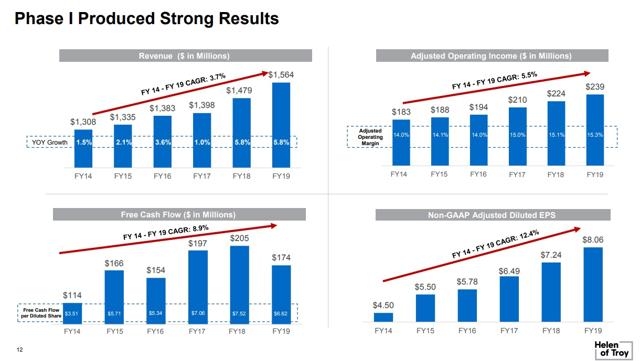 You see, phase 1 mostly focused on integrating the company as a whole, reducing waste, and developing an ownership culture throughout the organization. This is because before this plan was put into place, HELE was a disjointed operation with several different cultures and objectives. I would say there were many cost inefficiencies (i.e. waste).

Fortunately, after five years of HELE's successful phase 1, the company is now in excellent shape to pivot into its future. For context, step 2 consists of doubling down on international expansion and M&A. This is why I conclude that the previous five years were only the groundwork for HELE's real intentions. After all, HELE is now a cohesive unit, operating under a unified ownership culture. Also, its balance sheet is in great shape, and cash flows are steady. So, HELE is now in a great place to start focusing on growth, whether it's organic or through strategic acquisitions. 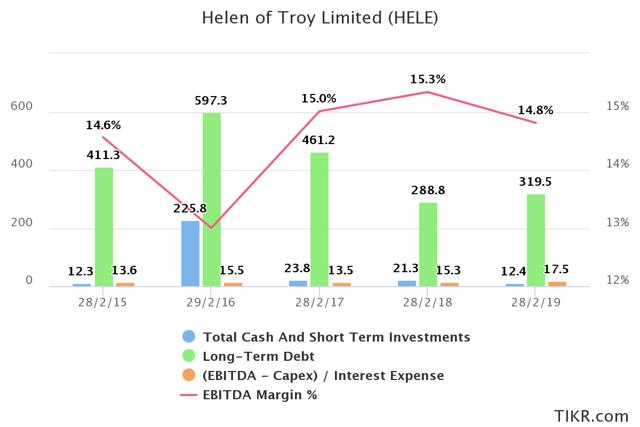 Source: Tikr.com. Over the past five years, HELE’s financial condition has significantly improved.

There's still some room to run

It's worth keeping in mind that HELE is priced at a moderately reasonable multiple right now. Currently, the company is trading at a sober forward PE ratio of 17.67. This is very refreshing since the overall market keeps hitting new all-time highs almost every day lately. Thus, it has become increasingly challenging to find good quality companies trading at fair prices. In my opinion, HELE is not cheap by any means, but it is not outrageously overvalued either. 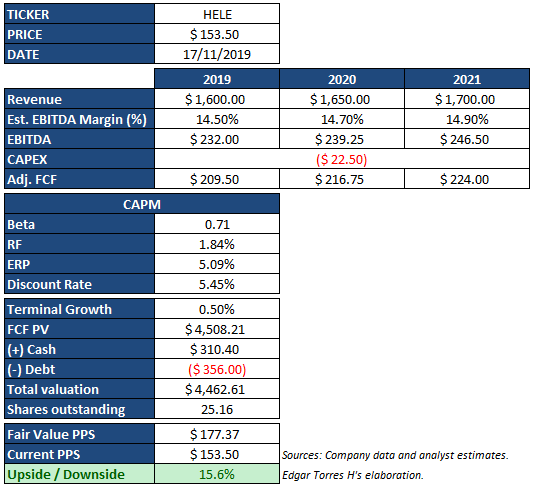 My valuation model uses HELE's guidance from its last earnings call. I've also used analysts’ top-line estimates for the company's revenues. Lastly, I have assumed a modest EBITDA margin improvement over the years, which is in line with management's expectations. As you can see, the results above show that HELE's fair value is roughly $177 per share. This implies a 15.6% potential upside from the current levels.

In my opinion, the company will likely face a challenging 2020. After all, the adverse effects of tariffs are going to start hitting HELE's gross margin soon. At the same time, inflation will also begin creeping into HELE’s costs. In particular, freight costs and the new ORIP tax are going to be significant headwinds going forward.

Nonetheless, I believe HELE does have some upside left in it. Its management team has been outstanding so far with the successful implementation of the company’s phase one. In my view, this bodes well for shareholders betting on HELE's phase two. But most importantly, I think that all things considered, HELE is slightly undervalued. Therefore, investors are justified in initiating a small long-term position in the company at these levels. Indeed, it looks like the best is yet to come.

Thank you for reading, and good luck.

Edgar Torres H
2.34K Followers
Follow me for analyses of undercovered/overlooked stocks. My takes are based on numbers but without completely ignoring the underlying story. I'm not uncomfortable holding unpopular opinions, nor do I seek them. I just want to get as close to the truth as possible.I've been an Investor for over nine years. I write to structure my thoughts. I worked on my country's stock exchange as an analyst for private debt prospectus. I worked as a sell-side analyst and also as a broker. I love the markets and everything related, and now I’m able to be a full-time investor. I'm very grateful for this. I hope my comments/articles are of use to someone else. - "Veritas Super Omnia."
Follow