Sinclair Broadcasting Group (NASDAQ:SBGI) has become very attractive at current levels. After a disappointing third quarter report earlier this month and failure to hold $40 per share, it wouldn't be a shock to see a little more short term downside pressure in the stock price. Short term weakness in the share price should be met with open arms from investors. We anticipate a strong 2020 for Sinclair centered around a very nice swing state footprint and Super Bowl revenue that should help Sinclair outperform other broadcast media groups next year.

As a long-term investment, there are certainly a number of risk factors in broadcast media as an industry. Declining viewership numbers in linear TV are likely going to continue to have a negative impact on Sinclair’s core business. Decreased TV ratings aren’t a secret or a new development. Yet even with that hurdle, Sinclair has been able to increase revenue each of the last 7 years. The company has achieved this by acquiring more stations and growing revenue in other areas.

Despite fiscal year revenue guidance missing consensus for 2019, even the company’s low-end estimate of $4.22 billion would be a year over year revenue increase of 38% from fiscal year 2018. The company has seen strong total revenue growth in 4 of the last 5 fiscal years.

Focusing on the core business, media revenues increased by 13.7% in 2018 over 2017. This slightly lagged media expenses, which increased by just under 14% in the same time frame.

Through the first 3 quarters of 2019, Sinclair has grown revenue 21% year to date to $2.6 billion. With a key strategic acquisition and litigation fees stemming form the failed Tribune deal, the company has experienced non-recurring expenses that have resulted in an operating loss for the three months ended September 30th, 2019.

Looking at standard metrics for valuation, the broadcasting sector skews toward the cheap side compared to other sectors on Wall Street. Sinclair’s numbers are largely comparable to companies like Nexstar (NXST), Gray (GTN), and TEGNA (TGNA) in areas like forward price to earnings (Sinclair is 7.82) or price to book (Sinclair is 2.3). Sinclair stands out with its 0.98 price to sales ratio. And if you’re into dividends, at time of writing, Sinclair’s 2.1% represents the best yield of its peers. With an enterprise value over $16.3 billion, Sinclair trades at a market cap discounting enterprise value by close to 80%.

2020 will be a banner year for Sinclair

Most ad buyers and ad sellers are thinking about the 2020 election and the political windows that are sure to be filled with ads from candidates both locally and nationally. This focus isn’t misguided. 2020 is projected to be a big year for political ad spending with estimates ranging anywhere from $6 to $10 billion depending on which forecast you believe. With Twitter punting on political ad dollars and pressure mounting on Facebook, it’s possible that even more money that was initially planned for social media could flow into broadcast instead. Regardless of what happens there, Sinclair has a nice market footprint for political dollars. Presidential battleground states include Wisconsin, Michigan, Pennsylvania, North Carolina and Florida. Sinclair has a presence in 12 markets across those 5 states. And if you include what has traditionally been a swing state in Ohio, Sinclair adds Cincinnati, Columbus, Dayton and Toledo. Those are 4 of the top 5 markets in the Buckeye State, only missing Cleveland.

Beyond political dollars, the Super Bowl airing on FOX in 2020 figures to be a big deal for Sinclair. 153 of the channels in Sinclair's local TV portfolio are “Big 4” networks. Of those 153 channels, 58 of them are FOX affiliates. Maybe more importantly, Sinclair has a higher percentage of Fox stations under ownership than several large peers. This means Sinclair aims to benefit more from Fox airing the Super Bowl in 2020 than other station groups of similar size. 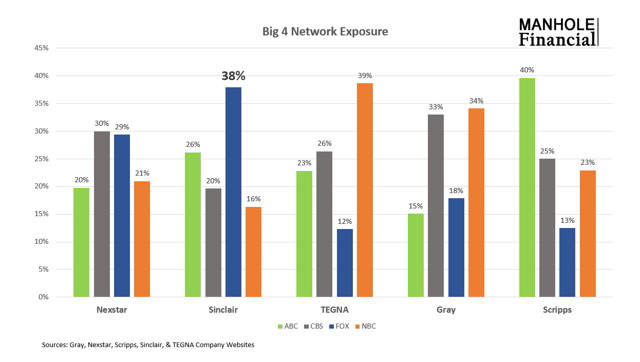 Though it has been ABC that has been the top network for Sinclair by revenue contribution each of the last 4 years, FOX has been a close 2nd each time. And the last time FOX had the Super Bowl, FOX affiliates owned by Sinclair contributed 25.2% of the company's advertising revenue, making it the best year for Sinclair's FOX stations since 2015.

Between a strong national footprint for political dollars and the Super Bowl airing on FOX, advertising revenue in Q1, Q2, and Q4 should show robust year over year gains for Sinclair in 2020.

Earlier in 2019, under the Diamond Sports subsidiary, Sinclair purchased the Fox Sports regional networks from Disney (DIS). This is a strategic play that makes a lot of sense. Sporting events are arguably the last DVR-proof viewing experience in live television. Some have even insinuated that it’s live sports that is holding linear TV viewing together. That’s why the regional sports deal is significant. With this deal, Sinclair acquires local exclusive rights to 42 professional sports teams spread out over the NBA, NHL, and MLB. This news helped the stock rally significantly earlier in the year. The share price is now trading lower than when the company announced the acquisition. Point being, the headline FOMO-buying is over.

Looking at the three-year trend in advertising revenue, sports programming is a clear growth area for Sinclair. With syndicated, network, and paid programming all flat to down, local news and sports are the areas where Sinclair can shine. The newly acquired regional sports networks should contribute in this area in a big way. 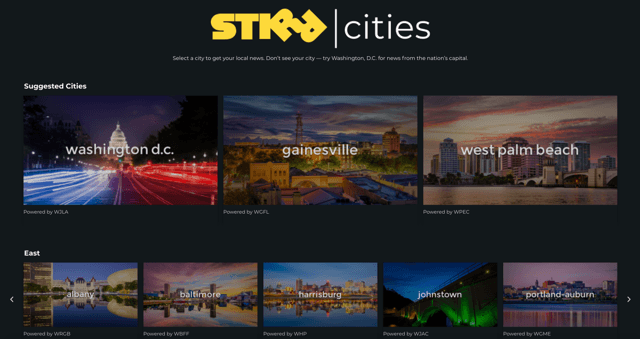 The company also launched a totally free streaming service called STIRR earlier this year. In addition to streaming live local newscasts and movies on demand, STIRR offers a wide variety of streaming channels like Cheddar News, Stadium, Comet, World Poker Tour, and The T. As far as we can tell, Sinclair is the only broadcasting group doing this. We feel it shows a level of forward thinking that, at this point in time, is unique to Sinclair in the local broadcasting industry.

As mentioned above, despite growth in other areas, linear TV viewing trends are still a concern. Economic recession is another risk. Advertising budgets figure to get cut in that type of economic climate. That would be bad for Sinclair and all local broadcasters.

Additionally, cord-cutting could impact Sinclair’s bottom line to a larger degree than other broadcast station groups for two reasons. First, steeper than anticipated declines in traditional pay TV services would mean declines in the market reach and ad revenue potential of the regional Fox Sports networks under the Diamond Sports Group name.

Second, and this might be the largest concern, almost 39% of Sinclair’s total revenue last year came from retransmission fees. While this doesn’t put Sinclair at the top of the list of local broadcast groups in the metric, it puts Sinclair consistently in the Top 2 over the last 3 years. 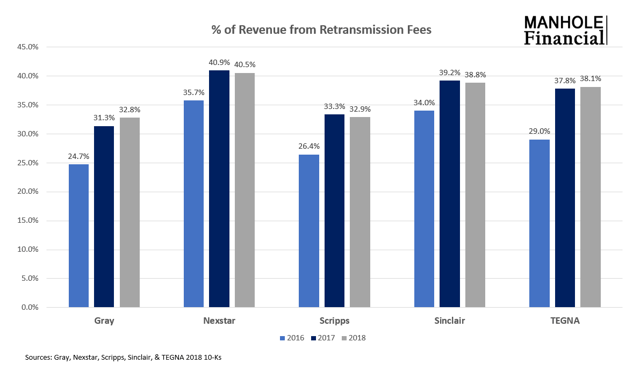 Why does this matter? Because in an intensifying cord-cutting environment, fewer paying subscribers means retransmission revenue will eventually go down. That’s how these carriage fees work. Local broadcast groups have been able to negotiate more favorable deals with the big MVPDs over the last 5 years. Those agreements have become more lucrative as the local broadcast industry has consolidated and larger footprint companies like Sinclair have amassed significant leverage at the bargaining table. But there is only so much revenue that broadcast groups will be able to negotiate away from cable and satellite providers. And in the face of MVPDs shedding more subscribers each quarter, it’s fair to wonder how much longer this model can be sustained.

Sinclair Broadcasting Group could fall back into its previous trading range. A price move lower should be met with open arms from bullish traders. 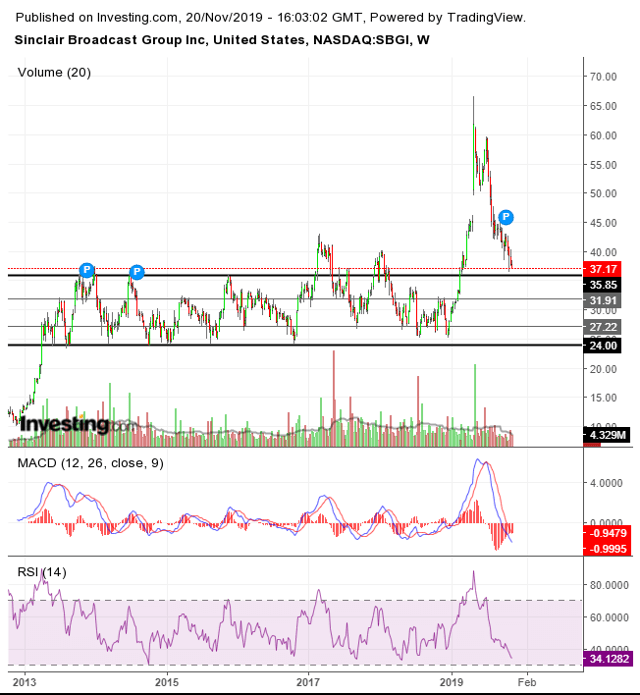 Looking at a longer-term trend on the weekly chart (above), we can see a clear $12 trading range between $24 and $36 per share. The stock held that range for over six years. After ripping to new all-time highs just a few months ago, Sinclair has retreated more than 40% since May. 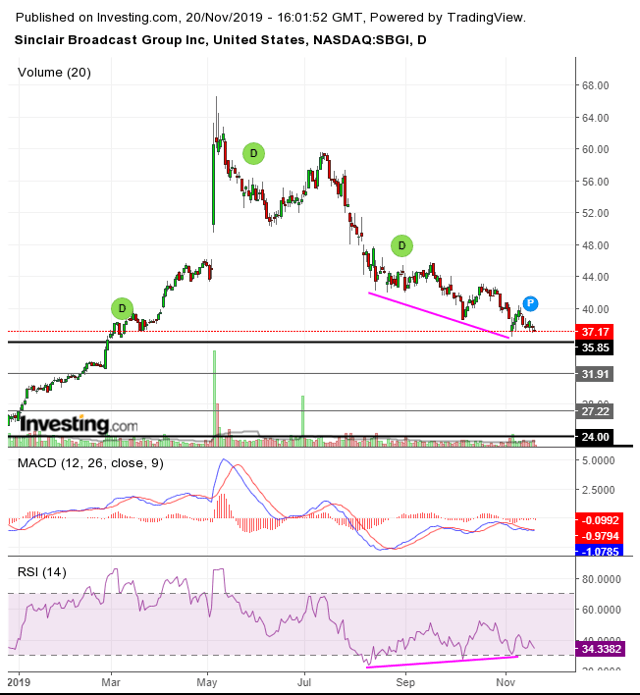 Shortening the view to a daily chart (above), there is an RSI divergence forming. The last two new price lows in the current trend have coincided with higher RSI lows. This insinuates the price could be making a short-term bottom. Even if you're just looking for a trade, Sinclair is starting to look very attractive.

We would like to see buyers stepping in at a retest of the top of the old trading range near $36 per share. If that support fails to hold, we would add more to our position at the next support level near $32. Anything below $30 is a phenomenal area to work on building a position.

Disclosure: I am/we are long TGNA, SBGI. I wrote this article myself, and it expresses my own opinions. I am not receiving compensation for it (other than from Seeking Alpha). I have no business relationship with any company whose stock is mentioned in this article.