Following the Disney Company (DIS) deal, Fox Corporation (NASDAQ:FOX) has been left with a series of valuable assets and little debt.

I believe FOX has the potential to create significant cash-flows and generate value for investors beyond what the price reflects.

My current target price for the stock is $55.

The aftermath of the Disney deal

Fox Corporation rrecently sold the majority of its assets to The Walt Disney Company in a $71 billion deal. Out of this merger/acquisition, the assets left were spun off into Fox Corporation, which went public on the 19th of March 2019. The IPO was set at $50/share which has since declined to around $35 as of today. The company trades under the tickers FOX and FOXA, with the only difference between the shares being the voting rights of the latter.

In the deal with Disney, FOX let go of most of its entertainment assets, while holding on to Fox News network, FOX broadcast network, and major-market TV stations, as well as the national sports cable networks.

In today’s article, we will review the latest quarterly report issued by FOX and I will put forth my arguments in support of why I believe the stock is undervalued.

1. A quick review of FOX

In this section, we will review what FOX’s current balance sheet and income statement. we will break down the revenue and assess to the health of the company with some ratios

Here is a breakdown of the revenue for the nine months ending September 2019. 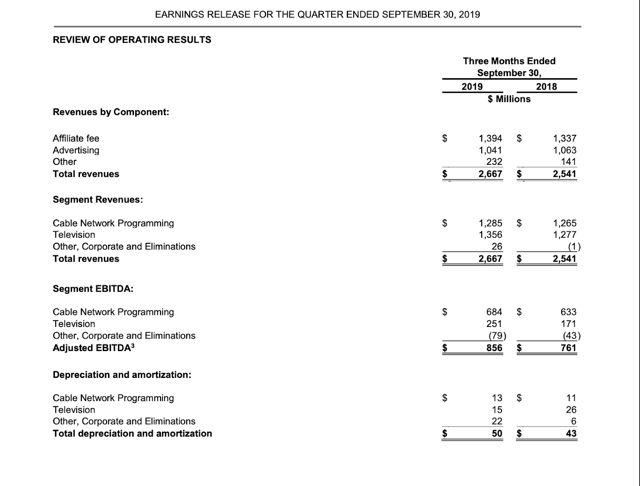 Fox reported total quarterly revenues of $2.67 billion, a 5% increase from the $2.54 billion of revenues in previous years quarter. The increase in revenues included affiliate revenue growth of 4%, driven by a 14% increase in the Television segment,

As for adjusted EBITDA, we can see a 12% increase driven by higher contributions at the Television and Cable Network Programming segments.

It’s important to note here that the revenue is quite evenly split between “Cable, Network Programming” and “Television”. However, Television grew at a rate of 6% while Network grew 2% relative to 2018.

The report also shows the breakdown for each of these segments, from which we can derive its profitability. 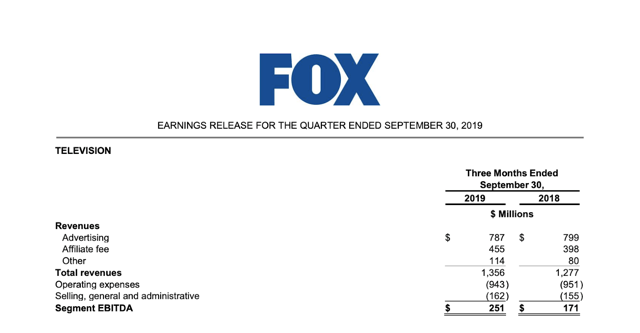 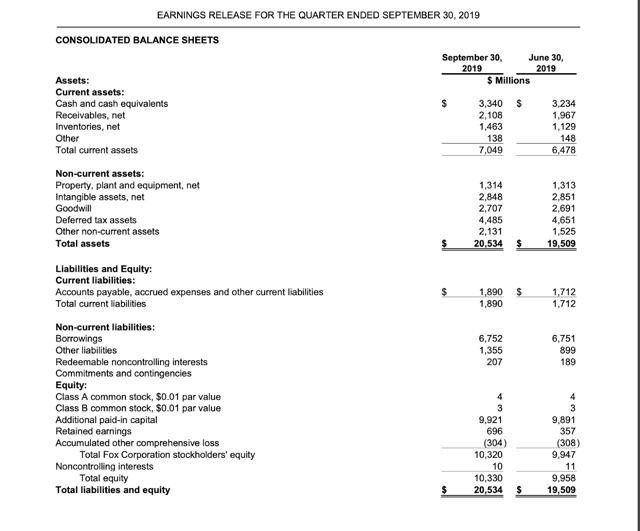 As we can see from the report the spin-off resulting from the Disney deal is in good financial health. Its debt-to-equity ratio is 0.70 and most of the borrowing is long-term. Also, the company holds a strong cash position of $3,340 million

In this section, I will explain from a qualitative perspective why I think FOX could deliver much more value to shareholders than is factored into the price.

FOX has been defined by many commentators as a cash-cow. Indeed, FOX is proficient at creating FCF and has recently begun a dividend policy.

Indeed, Fox boasts a levered FCF margin of ~14%. Furthermore, the notion that Fox can easily sustain and pay dividends is supported by the fact that it has high revenue streams independent of any Capital Expenditures. To this extent, Fox has a CAPEX/sales of 2.01%.

These numbers are a clear indication that Fox can and most likely will increase its dividends shortly.

Fox has resilient and valuable assets

More importantly, FOX is a valuable brand, it is outperforming its competitors and it has valuable assets. perhaps the most valuable of these are Fox Sports, which the company plans to use to leverage its Fox Betting operations, and Fox News, which has been proven to be the most-watched channel.

Finally, a few days ago Fox announced a $2 billion buyback scheme, spending close to 500 million in the short-term. This is not only good news for investors, but it is also a clear indication that management sees the stock trading at an undervalued price and capitalizing on the opportunity

Fox is one of the leading cable and network providers. Although the company in itself is new, there is a long track record and management knows the industry very well.

With that in mind, I am sure the company will continue to outperform its competitors and deliver value to shareholders.

In terms of share price, Fox currently trades at a P/E ratio of ~14.67. Similar companies in the industry such as AT&T Inc (T) and Comcast Corporation (CMCSA) trade at higher multiples of around 17.5 and the same is true of EV/EBITDA. Applying a 17 multiple to the company’s current EPS would leave us with a target price close to the $55 range.

The Digital Trend
15.72K Followers
Author of Technically Crypto
In-depth analysis on Bitcoin, Altcoins and the technology that powers them.