Rigel Pharmaceuticals (NASDAQ:RIGL) recently reported a very encouraging Q3 earnings report that revealed a strong beat on EPS and revenue. Rigel continues to hit its commercial and clinical goals, but the market seems to be oblivious to the company's progress in 2019. Not only is the company executing an impressive U.S. launch for TAVALISSE, but it is also moving closer to a potential EU approval in early 2020. Despite the progress, RIGL continues to trade below $2.50 per share with a market cap under $400M, which is undervalued when comparing it to other publicly traded biotech companies that are at a similar stage of development. I believe this incongruence is an opportunity for those looking to add to their RIGL position or to start an investment in this ticker before the market is forced to recognize this promising biotech.

I will review the company's Q3 earnings and explain why I think RIGL is still discounted. In addition, I reveal my plans for the RIGL position as we wait for the European Commission's decision on TAVALISSE.

Rigel reported net product sales from TAVALISSE of $11.7 M, which was 15% increase from Q2 and 141% from Q3 of 2018. Rigel also collected $9.1M from partnerships including $4M from Aclaris Therapeutics (ACRS) and $3.8M from Impact Biomedicines. Rigel finished Q3 with $107.5M in cash and short-term investments and a fresh $60M debt facility (Figure 1).

Strong top-line growth and multiple milestone payments should inject some confidence in RIGL's investors. In addition, a strong cash position will allow Rigel to continue its commercial efforts but without slowing down the pipeline. The market is somehow overlooking Rigel's advancements but sooner-or-later the fundamental valuations and estimated revenues will demand attention (Figure 2). 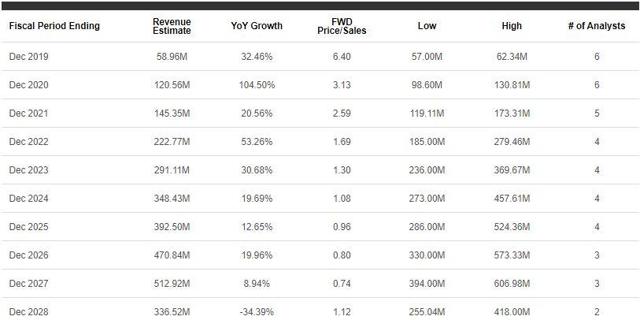 The first value driver is TAVALISSE which continues to record sales growth in the ITP space. Rigel has captured over 4% of the estimated $1B U.S. ITP market (Figure 4). This is impressive considering TAVALISSE has only been on the market for about five quarters.

The second value driver is TAVALISSE outside of the United States. Rigel has worldwide partnerships for Europe, Asia, Canada, and Israel. These partnerships will expose TAVALISSE to part of the $800M global market (Figure 5). 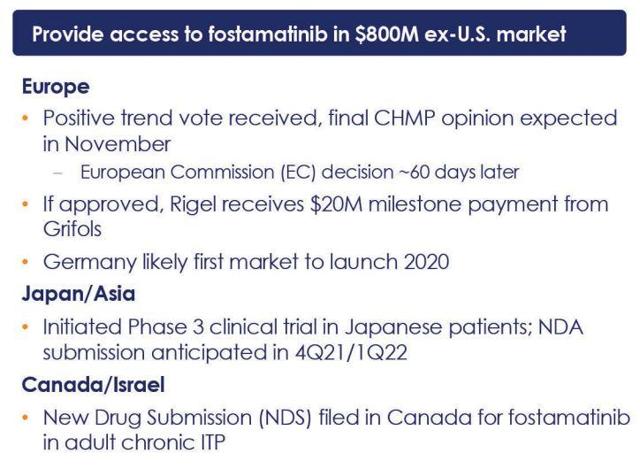 The third value driver is TAVALISSE in warm autoimmune hemolytic anemia "wAIHA", which will be a complementary indication for ITP. If approved, TAVALISSE will have additional use, but without the need for the company to increase its commercial infrastructure or organization. Rigel has already initiated enrollment in its Phase III pivotal trial and is on its way to have TAVALISSE to be the first and only approved therapy in wAIHA.

The fourth value driver is the company's pipeline (Figure 5), which contains some impressive clinical programs involving TAVALISSE and the company's IRAK1/4 and RIP1 inhibitors. Most of these programs are partnered with reputable companies that can contribute to the program's clinical and/or commercial success.

During Q3, Rigel produced $11.7M in net revenue, which signifies roughly 15% growth over Q2 of 2019. Rigel shipped 1,355 bottles to its specialty distributors, with 1,291 of those bottles being shipped to patients and pharmacies or clinics (Figure 4). Since launch, Rigel has sent 5,438 total bottles, which has produced ~$44M in net product sales.

Rigel's efforts to increase awareness about TAVALISSE's attributes to physicians, payers, and patients appear to be paying off. TAVALISSE's four-month persistence rate was above 50% in Q3, with signs of continued movement into early lines of therapy because it addresses the physiology of ITP.

Overall, TAVALISSE continues to have a strong U.S. launch in both the number of bottles sold and the persistency rate. The market appears to be discounting Rigel's U.S. commercial ability, but the company continues to hit its targets and execute its plan. Personally, I believe it is a matter of time before physicians see TAVALISSE as the new standard in ITP.

Rigel received a positive opinion from the CHMP meeting in mid-November, which counsels the EC on product approval. Like an FDA AdCom vote, a positive opinion from the CHMP typically results in an EC approval. If TAVALISSE is approved, the company should receive a $20M milestone from Rigel's partner, Grifols (GRFS). If approved, Grifols intends to launch TAVALISSE in all the major European countries, with Germany being at the top of the list. According to Rigel, Germany is the largest market for ITP patients, which should be a great place to launch from. Overall, the European approval will open the door to a $400M ITP market that needs an alternative such as TAVALISSE.

Rigel recently publicized its RIP1 inhibitor program to treat chronic inflammation and will explore its uses in CNS indications. According to Rigel, "RIP1 activation is a key driver of necroptosis, a form of cell death in which the cell ruptures and its contents spill out into the surrounding tissue which signals tissue damage and elicit a damaging inflammatory response. In diseases, this unrelenting necroptosis can drive and further disruptive inflammation." By inhibiting RIP1, the body will stop necroptosis and its disruptive inflammation that is seen in debilitating conditions of the GI tract, joints, skin, bone marrow, and the brain.

Typically, I am not overjoyed when I see a freshly commercialized company announce another pipeline program. I like to see the company focus on their commercial efforts and cutting expenses. In terms of Rigel, I know the company is willing to find partners and make deals to help with the expense and labors. Therefore, I am not apprehensive about another pipeline program…in fact, I am happy to see the company flexing its R&D muscles.

In terms of downside, I find the lack of attention to be the biggest long-term threat to the share price. The company's products, programs, and target indications are not exactly mainstream healthcare. Prior to researching Rigel, I couldn't tell you the physiology of ITP, and I would be able to tell you what "wAHIA" was. In general, RIGL is just an underfollowed stock and will most likely trade in a disconnected fashion from its intrinsic value.

The company's four value drivers are not just talking points for an investor presentation, but are four legitimate reasons why investors should consider a long-term investment in RIGL. Rigel is now a commercial-level company that has successfully launched its own product. Now, the company is ready to take TAVALISSE beyond the U.S. and is currently waiting for a verdict from Europe. Rigel is maximizing TAVALISSE's potential to treat wAHIA, which would create a strong synergy with the company's ITP efforts. Once TAVALISSE hits full stride, the company has a solid pipeline that includes promising programs to treat underserved patient populations. Altogether, these drivers should create long-term value for the company and its shareholders. In the near-term, investors should rely on potential EU approval in the coming months and a subsequent launch in 2020 to provide some positive momentum into the share price.

What's My Plan? I am looking to make a small addition to my mid-size RIGL position before the EC makes its decision on TAVALISSE. If approved, Rigel will have the go-ahead to launch TAVALISSE into the second-largest commercial market. As a result, RIGL will instantaneously rise in intrinsic value, which will hopefully translate into its market valuation. On the other hand, if Rigel fails to receive EU approval, I will hold off on adding to my RIGL position until the end of 2020.

Disclosure: I am/we are long RIGL. I wrote this article myself, and it expresses my own opinions. I am not receiving compensation for it (other than from Seeking Alpha). I have no business relationship with any company whose stock is mentioned in this article.