Editor's note: Seeking Alpha is proud to welcome Brian Mork as a new contributor. It's easy to become a Seeking Alpha contributor and earn money for your best investment ideas. Active contributors also get free access to SA PREMIUM. Click here to find out more »

Campbell Harvey published a thesis in 1986 linking inverted yield curves to recessions about 12-18 months after longer term interest rates dipped below shorter term interest rates. Many people subscribe to this theory; however, a new method of visualizing bond data convinced me that yield curve abnormalities do not predict future events. I recommend using the new visualization method to better understand investment options. At the present time, I suggest avoiding bond durations of 3-5 years.

Existing analytical methods are capricious. Some use 10-year rates minus 2-year rates. However, choosing those two numbers is arbitrary. These two numbers are often used without other context or comparison to similar numbers. The situation is more nuanced than that, and thoughtful investors have to ask additional questions: How long does the difference have to stay negative? Is more negative more bad? How much negative is enough to count? What do other subtractions indicate? And so on.

Highlighting the fragility of just subtracting two numbers and making financial decisions on the result, other analysts use different loan durations. This source shows in tabular form that there are many different durations of months and years to compare, and using different numbers gives different indicators. However, the reader is left with the impression that "pick your two numbers, subtract short from long and be concerned if it equals a negative number" is an authoritative method.

Well, there is a better way to look at the same data. First I'll present two common chart types and then the more original 3-D chart. All charts use the same Government treasury data.

A yield curve shows interest rate as a function of loan duration: 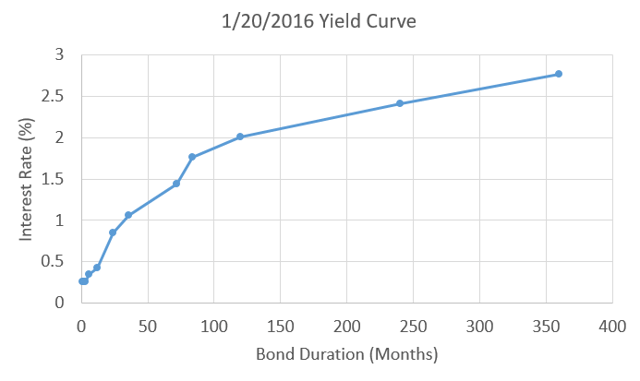 Source: Original chart by the author.

A common variation is to chart the interest rate as a function of time. This is the version many people use to forecast doom by plotting two curves at the same time or the difference between two curves. I show only one curve here for clarity. If you'd like to see a dozen or more varieties of rate versus time charts, do a web search for images related to yield curve inversion. This type of chart allows you to see how fast the curve drops and how far it moves relative to recent history or past events. 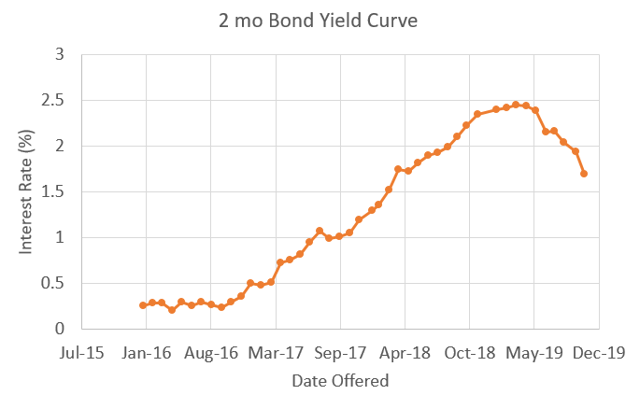 Source: Original chart by the author.

Still, those graphs don't let you see how the effect moves over time and at the same time consider different maturity dates. There is a way to chart the data that gives more information than I've seen published anywhere else. Below is a 3-dimensional chart of treasury bond data. First let me explain the graph, then make some observations, which leaves me concluding that inverted yield curves represent people's fear of an arbitrary future more than harbingers of financial reality. 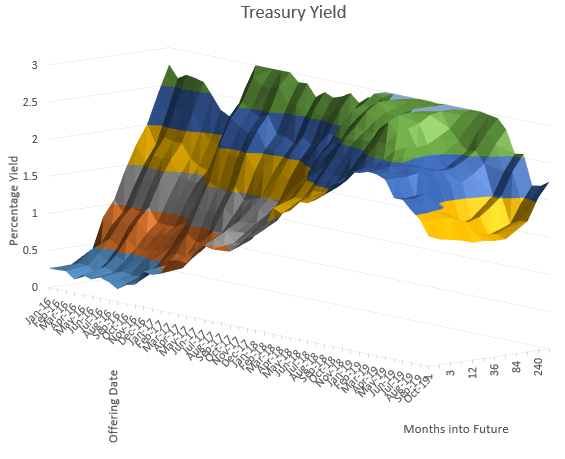 Source: Original by the author.

The vertical axes is the loan rate, ranging from 0 to 3 percent, with a changing color every 0.5% percent. Along the front bottom axis are monthly snapshots in time ranging from the beginning of 2016 at the left through the 3Q of 2019 on the right. At each time snapshot, along the other bottom axes, months of loan duration are shown from 1 month to 30 years.

Notice the third axis is not linear. If loan durations were spaced out at even month intervals, the back of the chart would be stretched out into an almost flat surface. In other words, when you get out past a few dozen months, it takes a big difference in time to make much difference in earned interest rate.

Normal interest rate yield curves dominated back in 2016, on the far left side of the graph. These look like the front of a ski slope coming down a mountain. High rates exist at long loan durations slide down to low rates for short duration bonds.

What gets interesting toward the end of 2017 and early 2018 is that the short term rates (the "foothills of the mountain") started rising up while the long rates stayed about the same. This was not across-the-board inflation. Then as the short rates level off, the long term rates actually start sinking. This is an alternate phenomena that can be seen only when looking at a 3-dimensional graph. On a normal yield curve graph you would see the difference go more negative, but would be unable to see that in one case it's cause by short-term going up and the other case it's cause by long-term going down.

The ominous behavior continues when the mid-term rates keep sliding down and make a "valley" on the surface. Notice this is not "long rates lower than short rates." It would look like that if you considered only two points. But what becomes obvious on this graph is that it's an interest rate suppression at medium bond durations.

Even when short term rates came down, the mid term rates fell at the same rate to keep the valley intact. More than two numbers simply subtracting to something below zero, this valley represents the anomaly that integrates and considers behavior across the months and across the range of loan durations - all at the same time in the same chart. The valley is not at a certain date nor is it at a certain loan duration. With the 3-D graph, you can see it's a feature or phenomena that spans a significant amount of space.

Considering the specific data charted, the valley shows lower bond rates in the range of 36-72 months. Rates can be low and prices higher because people are preferring bonds over other investments over this time window of investment. Other investments, say the equities market, is less attractive of a competitive investment over the same span of time. Loosely said, there is something out at that time - approximately 2023 through 2025 - that people are afraid will be bad, so they're preferring bonds of this duration to secure known returns.

The valley is not transient. It has existed now for nearly a year, first appearing in January 2019. You may be able to see that date on the graph, but it's even more obvious by looking at the lows in the table of data that was plotted.

Here's the interesting part. From January 2019 through December 2019, we've gotten 12 months closer to whatever event everybody is afraid of. So, I would have expected the valley to move closer by about 12 months. Although the valley started at the 3 year duration, it should now have shifted a year closer and have a valley bottom at 2 years duration. It has not. In fact, the bottom of the valley has broadened and wiggled around and expanded out to the 36-72 month duration bonds.

In other words, there is no fearful event out there at a fixed date that is coming at us as the months in a calendar go by. Instead, a phantom investment fear seems to hang out in the 3-5 year point indefinitely. There may be reasons for extra high fear causing the valley. There are reasons people are more comfortable with equity investments at shorter and longer durations, thus indirectly causing a valley.

The financial community accepts that investments are more predictable "over the long haul." What is "long haul"? 10 years sounds like a good round long number, so I believe people do not fear the 10 year picture. The data in the chart we're looking at show that even the 7 year picture is comfortable because the bond rate valley has never reached out that far. There are always good other investments for the 7-10-20-30 year investor, so the bond market has to pay higher rates to compete.

Below 3 years, that is well into the financial planning cycle of industrial manufacturers and government contracts. Any decent financial department of a company already knows what things are going to look like in 2 years because those service contracts and equipment investments are being done now. So people are not afraid of short term investments. Notice the author of the original inverted yield theory also speaks of the confidence of less than 3 years in the article quoted above. He opined that CFOs can see the future out to 3 years and beyond 7 years (but not in between). This matches what I have found in the data.

Until studying 3-dimensional yield curve graphs, nobody showed this truth in the numbers and used the inverted yield curves to decouple future events from future beliefs. "Inverted" is the wrong name applied to these anomalous yield data. More complete 3-D graphs show only a "valley" that is not inverted if you consider longer durations out past the valley. The unknown zone is the 3-5 year window. And that's not tied to any real event. In another 3-5 years, where will the unknown be? Extrapolating the first year of data predicts it will still be in the 3-5 year zone. The interest rate valley is based on intractable beliefs, risks, and unknown. The valley is not based on tangible fixed events.

So, that brings us back to the original reason for looking at yield curves. Do they predict a recession 12-18 months out? Interpreting 2-dimension charts or two specific numbers gets lost in the weeds clarifying 12 to 18 months from which zero crossing of which bond duration at what magnitude and for how long. Using a 3-dimensional graphs shows the situation much better. The interest rate valley first started to appear in January 2019 and became comprehensive inverted (valley-like) through the Spring of 2019. However, after a year of passing time, the data suggests there is no "boogie man" recession event coming at us from 3 years out.

Brian Mork
1 Follower
I am an individual investor and analyst, with a scientific PhD and test engineering background. I'm trained to extract information out of raw data, and integrate observations. After decades managing resources of families and small homesteads, I thought it would be good to share ideas and get feedback from others. My writing is targeted toward individuals and money managers looking to find new understanding in old data.
Follow