A promising set of initial trial data and a rich portfolio of drugs has not stoked investor interest yet for Moderna, Inc. (NASDAQ:MRNA). Since its IPO in December 2018, the stock has underperformed with a gain of only ~4% compared to the ~9% rise of the NASDAQ Biotechnology Index. The shrinking revenue, lack of late-stage clinical trials in addition to the complex mechanism of therapeutics based on messenger RNA (mRNA) might have held back the investors.

The company is seeking collaborations that could boost revenue and slash expenses in the future. The rich drug portfolio backed by the positive trial data strengthens its bargaining power for lucrative deals. Meanwhile, the liquidity level remains steady to fund the future clinical development. Yet, the company trades at a sharp discount to its peers based on the price to forward sales multiple for 2019 and 2020, an opportunity to 'Buy', given the near-term catalysts and expected collaborations. Further streamlining of drug portfolio meanwhile could refocus Moderna's research efforts and sustain the premium valuation.

Moderna, a clinical-stage biotechnology company based in Cambridge, Massachusetts, with a portfolio of 21 drug candidates targeting 20 conditions currently has 13 clinical trials in progress. The mRNA, the basis of its therapeutic agents originates from cellular DNA (transcription) under normal physiological functions. The proteins are the 'workhorse' of every cell and mRNA codes for their amino acid sequence during the protein synthesis (translation), thus playing a vital role in cellular functions.

Despite the challenges in mRNA-based medicine, Moderna's pre-clinical studies have successfully demonstrated its efficacy as a therapeutic agent. The LNP (liquid nanoparticles) technology with targeted delivery of the mRNA has ensured maximum potency of the drug without enzymatic degradation and serious adverse reactions. The recent expansion of the laboratory space in Norwood, MA, could further scale-up research to boost the in-house manufacturing started last year. The company's web-based drug design studio integrated into a modular synthesis system can handle up to 1,000 orders of unique mRNA sequences per month within a turnaround time of a few weeks.

Moderna's pool of development candidates looks solid, with a few candidates standing out from the rest with positive data from phase 1 trials. The mRNA-4157, the PCV vaccine (personalized cancer vaccine) developed in partnership with Merck & Co., Inc. (MRK), has a 50-50 profit-sharing deal in the event of commercialization. It encodes up to 34 neoantigens, the unique protein sequences produced by a growing tumor. With even a single antigen eliciting an immune response strong enough to destroy cancer cells, the company believes, the multiple neoantigens encoded by the drug could result in a better prognosis for cancer patients. The company has dosed the first patient with mRNA-4157 in a phase 2 trial against high-risk resected melanoma.

The RSV (Respiratory syncytial virus) vaccine (mRNA-1777 and mRNA-1172) currently in a phase 1 study could potentially uncover a market opportunity worth billions of dollars. A collaboration with Merck, the company is in line for milestone payments worth $300M from the research partner as the phase 1 data readout approaches. AZD8601 targets ischemic heart failure where there is inadequate blood supply for heart muscle contraction. Currently, undergoing a phase 2 trial, the concept is to promote cardiac tissue revascularization through the targeted delivery of AZD8601 to heart tissue, thereby increasing the local concentration of vascular endothelial growth factor A. No current therapies currently focus on the heart tissue regeneration specifically. The company is waiting for the phase 2 data readout in addition to milestone payments and royalties from its research partner AstraZeneca PLC (AZN).

Additionally, DARPA (Defense Advanced Research Projects Agency) funds the research into mRNA 1944 for developing immunity against Chikungunya infection through antibodies. Another multi-billion-dollar market opportunity with sole commercial rights awaits Moderna as the company single-handedly develops mRNA-1647 as a vaccine against CMV (Cytomegalovirus). A phase 2 study is scheduled to start in the near term while preparatory work for the pivotal phase 3 trial has already begun. CMV is the commonest cause of birth defects in the U.S. with no vaccination currently available against the infection.

Moderna's topline, made up of revenue from collaborations and grants is, however, on a decline currently. The contribution from collaborations has dropped to ~78% as of the third quarter of 2019 (Q3 2019), with the Merck collaboration making up ~68%. Comprising ~51% of the total grants in Q3 2019, the Bill & Melinda Gates Foundation funds the majority of grants, as it supports the initial clinical research into a potential mRNA medicine to prevent HIV (human immunodeficiency virus) infections. The revenue generated from collaborations, which made up ~91% of the total revenue in 2018, has dropped ~61% YoY (year-over-year) in the LTM (last twelve-month) period. The company blames its lukewarm approach to forge partnerships in the wake of the 2018 IPO, the then-biggest biotech IPO ever. In contrast to ~90% YoY (year-over-year) growth in 2017, Moderna's LTM revenue, as a result, has tumbled ~57% YoY, steeper than the ~34% YoY decline in 2018. Having adjusted for the revenue recognition standard ASC-606, adopted at the start of 2019, the LTM revenue has only contracted ~35% YoY, approximately in line with the 2018 decline. 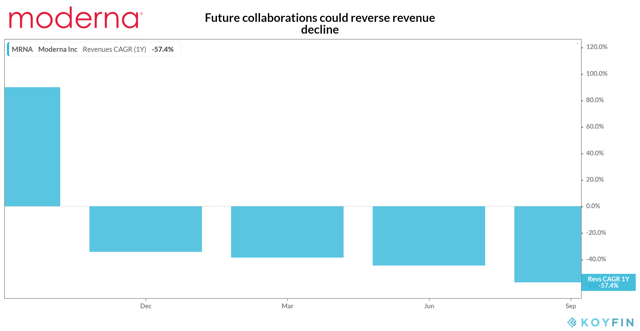 The impending milestone payments and royalties from Merck and AstraZeneca for RSV vaccine and AZD8601, respectively, could reverse the decline in 2020. Out of the 10 drug candidates with positive phase 1 data, the company currently owns sole commercial rights for more than half of them, providing ample opportunities for future collaborations. As declared in the Q3 2019 earnings call, the company has recently revived the efforts to strike partnerships, and if successful, could further boost 2020 revenue. Even the solo development of certain candidates such as CMV and hMPV-PIV3 (mRNA1653) vaccines looks attractive in the long run, given the sizable market opportunity which the company estimates to be worth billions of dollars. The consensus estimate of ~53% YoY decline for 2019 revenue, however, appears realistic as Moderna's top-line has been shrinking at ~53% YoY on average in the previous three quarters. Furthermore, the ~$83.8M of revenue forecasted for 2020 with a YoY growth of ~32% seems prudent ahead of more collaborations and the expected milestone payments from the current partners next year.

The higher costs associated with a public company have surged Moderna's LTM operating costs by ~32% from a year ago, while the operating loss as of Q3 2019 climbed to more than seven times the revenue. With more collaborations sharing the development cost and bringing additional revenue, the operating expenses and losses, however, could fall next year. 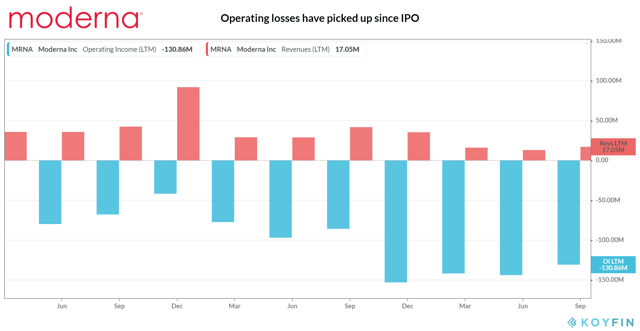 Despite the sharp decline in LTM revenue, the cash and cash equivalents as of Q3 2019 have only declined ~1% YoY. The company revised up the year-end liquidity level to ~$1.20B of cash and cash equivalents from ~$1.15B - ~$1.2B forecasted earlier, still a decline of ~21% YoY from the level in 2018. Having adjusted for the last year's IPO, where the net proceeds amounted to ~$563M, the forecast, however, indicates a growth of ~25% YoY, a robust expansion, given the clinical trials Moderna is advancing unassisted. The existing funding level at ~$1.5B as of Q3 2019 in cash and grants could sustain the operations for nearly three years at the current LTM cash burn rate, which could further improve in the event of more partnerships. 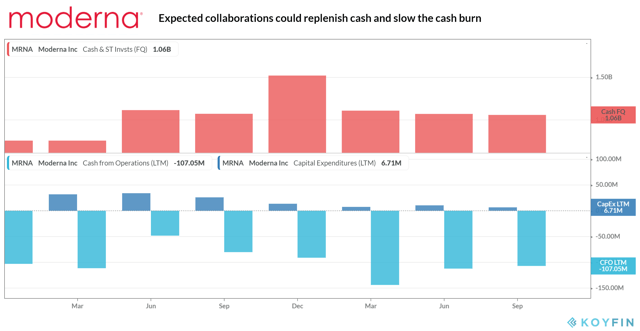 The Expected Collaborations and Promising Trials Demand a Premium

Moderna is not alone in mRNA-based therapeutics, but its expansive candidate pool capable of striking collaborations sets it apart from peers such as ProQR Therapeutics N.V. (PRQR) and Translate Bio, Inc. (TBIO). Both are clinical-stage biotech companies with a limited pool of drug candidates. Yet, Moderna currently trades at ~101.5x and ~77.0x in terms of its estimated 2019 and 2020 revenue, respectively, implying a ~15% and at ~54% of discount compared to the average peer multiples for the respective years.

Focused on visual and auditory impairments, ProQR's drug pipeline targets only three indications. The latest timeline for the interim data is in Q1 2020 from its clinical candidate QR-421a for syndromic and non-syndromic retinitis pigmentosa (RP). The Phase 2/3 trial for Sepofarsen targeting LCA10 (Leber's Congenital Amaurosis 10) is ongoing with topline data expected in the first half of 2021. Despite an LTM revenue decline of ~42% YoY and a ~38% YoY decline in cash and equivalents, the company trades at ~131.4x and ~226.9x of its 2019 and 2020 revenue forecast, respectively. Despite having only one drug candidate, the price to forward sales multiples for Translate Bio currently stand at ~106.9x and ~105.5x for 2019 and 2020, respectively. Its MRT5005 is undergoing phase 1/2 clinical trial targeting cystic fibrosis as company focuses on pre-clinical research to treat a range of pulmonary diseases.

The ~15% discount based on the average peer multiple for 2019 highlights a compelling 'Buying' opportunity as the company expects a range of catalysts in the near term: phase 1 and 2 data readouts are pending for PCV, VEGF-A has a phase 2a readout, and CMV vaccine awaits the start of the phase 2 dose confirmation study. Moreover, the discount for 2020 price to forward sales multiple further reinforces the attractiveness of the stock with even the relatively lower price to sales multiple of Translate Bio, suggesting a discount of ~27%.

Targeting a range of diseases from viral infections to cardiac failure, Moderna's development program is extensive. With many promising candidates, the selectivity afforded by the disparate pool of drugs, however, gives it a higher bargaining power in partnership negotiations. The lack of focus can be a weakness too. Some clinical programs without a partner may be costly to develop, given the inadequate market opportunity, while the collaborations will force the company to share profits from lucrative candidates despite the costly initial development.

Therefore, Moderna could streamline its drug portfolio, offloading the less lucrative candidates through collaborations. An unhindered development of breakthrough therapies could be made possible by the resultant decline in research expenses and improved liquidity. The CMV vaccine, which has reached an advanced stage in development without a partner, can be such a highly valued candidate, given the vast market opportunity. The impending phase 2 and pivotal phase 3 trials could step up R&D costs for the vaccine, even though the company expects its pre-investment expenditure to only impact the 2020 bottom-line.

Despite shrinking revenue in recent quarters, Moderna's liquidity remains steady. A number of promising drug candidates with positive phase 1 data could attract more collaborations next year boosting revenue and cutting expenses. And yet, the company is trading at a sizable discount to its peers in terms of price to forward sales for both 2019 and 2020. Amid the impending catalysts from ongoing clinical trials, the undervalued stock implies a clear opportunity to 'Buy'. Meanwhile, more collaborations could refocus the clinical programs and sustain the rich premium the stock deserves.

Dulan Lokuwithana
1.52K Followers
A research analyst with CFA (US) Level I & II qualifications, and CIMA (UK) full qualification, Dulan primarily covers Health-care and Restaurant Stocks for Seeking Alpha. A Graduate in Human Biology, Dulan's expertise in the industry refines his Health-care analysis, and the sheer passion in cuisines spices up the Restaurant sector coverage. With a focus on medium to long-term investment horizon, Dulan hopes to uncover investment opportunities in mid-cap to large-cap stocks less well covered by the analysts.