The shares of Talend (NASDAQ:TLND), a leader in the data integration platform supplier market, have not fared too well this year: 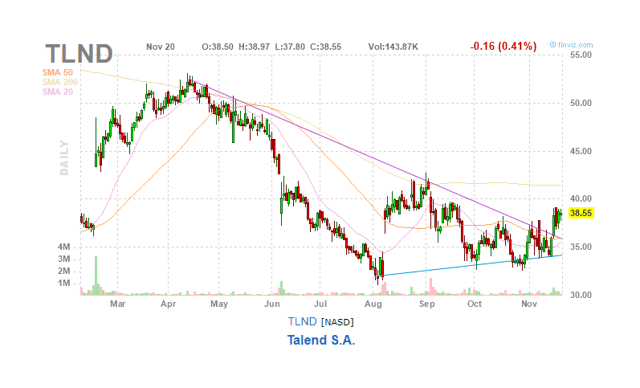 As many of these software companies, there is strong revenue growth but no profits, at least not yet.

That basically brings a number of questions for investors:

Here is basically what the company does, from the earnings deck: 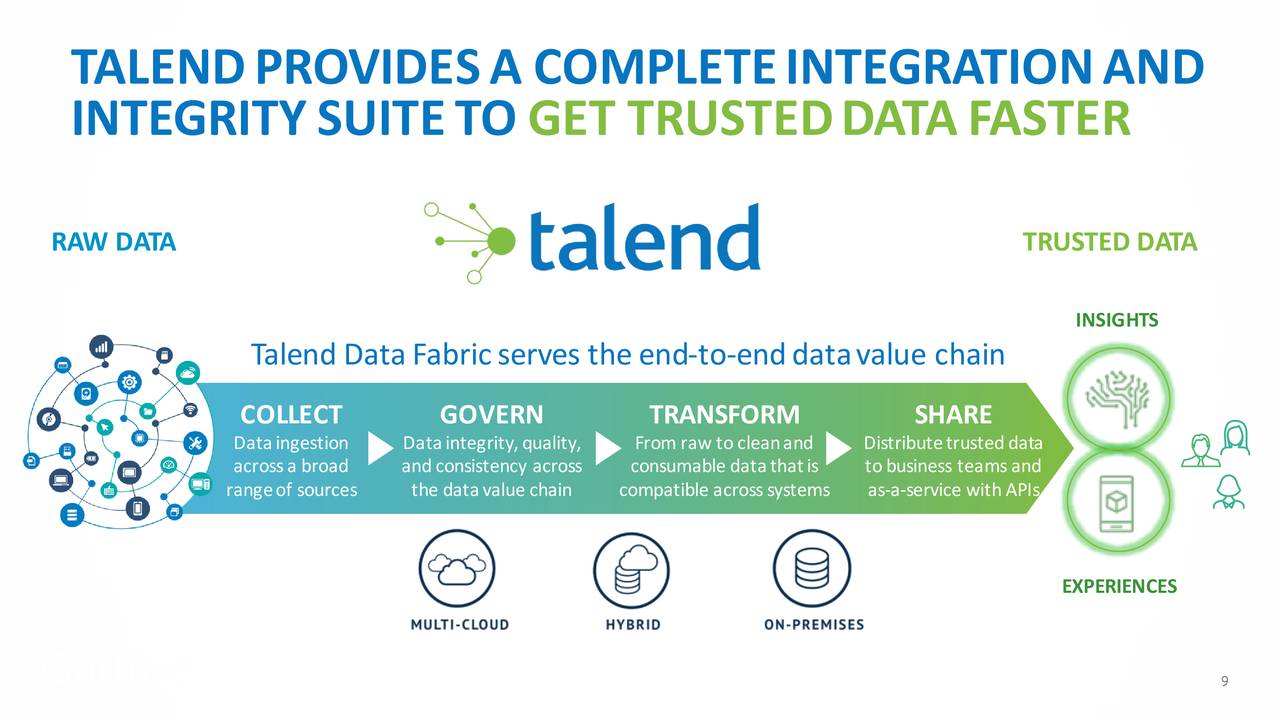 It is a leader in the data integration market, together with other companies mentioned in Gartner's Magic Quadrant (earnings deck): 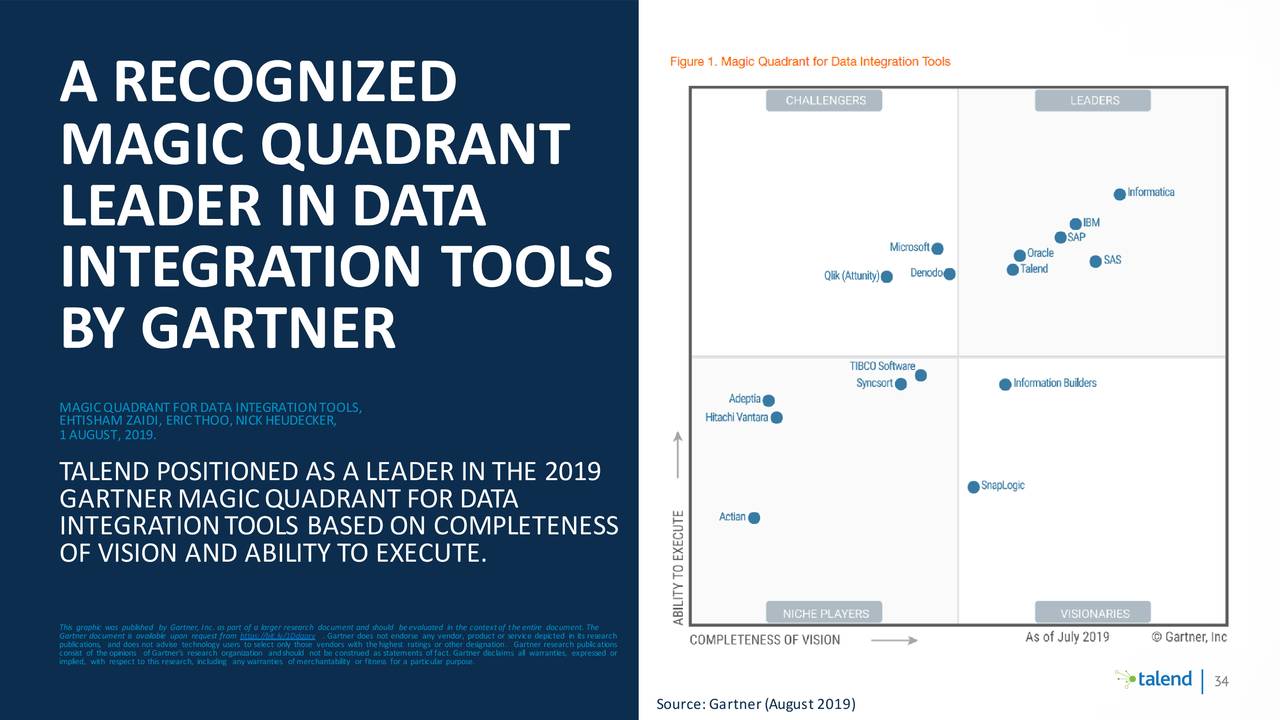 There are a few more slides in the deck from Forrester and Gartner showing basically the same picture. The market is expected to grow (Markets and markets):

Or, from Hitz Diaries:

Global data integration market is to grow at a healthy CAGR of 14.2% in the forecast period of 2019 to 2026. The report contains data of the base year 2018 and historic year 2017. This rise in the market can be attributed due to rising of cloud data storage, smartphone, and lack of physical data storage.

But Talend, despite being slowed down by its move to the cloud, is still growing faster than the market, even if the growth rate is half that of a couple of years ago:

There are three reasons why that 20.3% growth is an underestimation:

From the earnings deck: 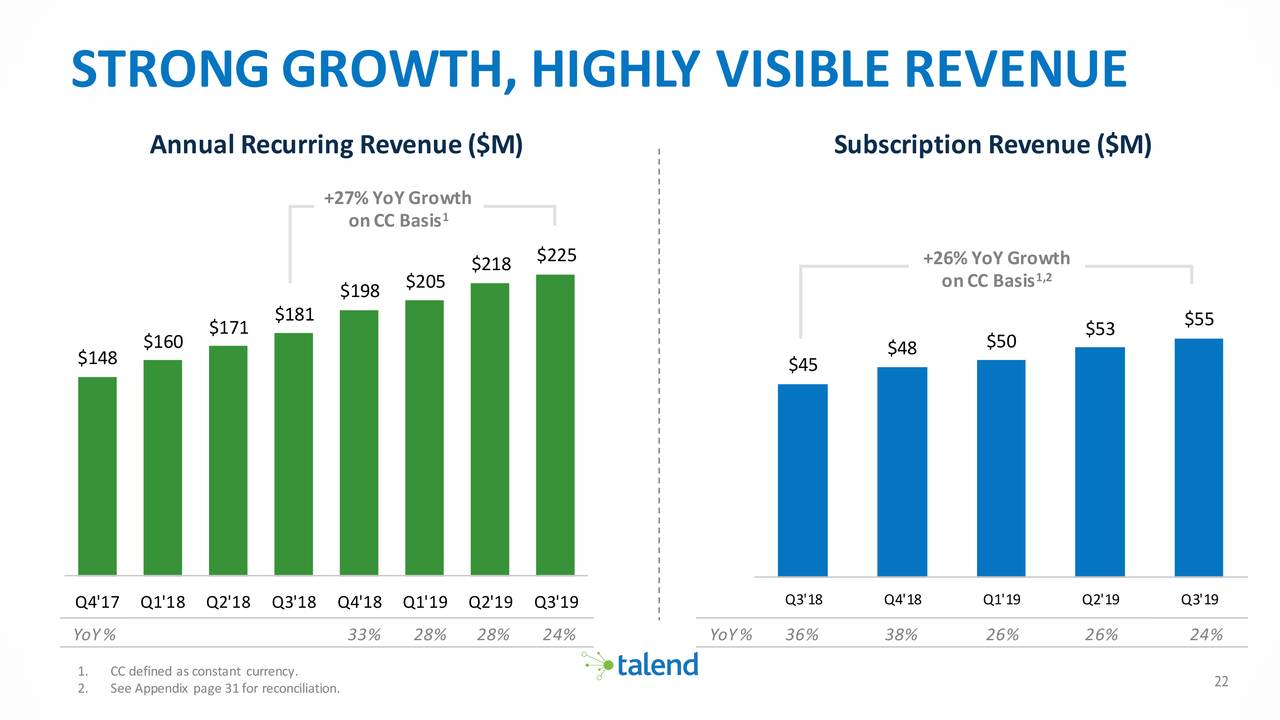 From these figures it will be clear that the cloud is where it is happening for the company, so we'll turn to that.

The cloud part of the data integration market is growing faster than the overall market, from the earnings deck: 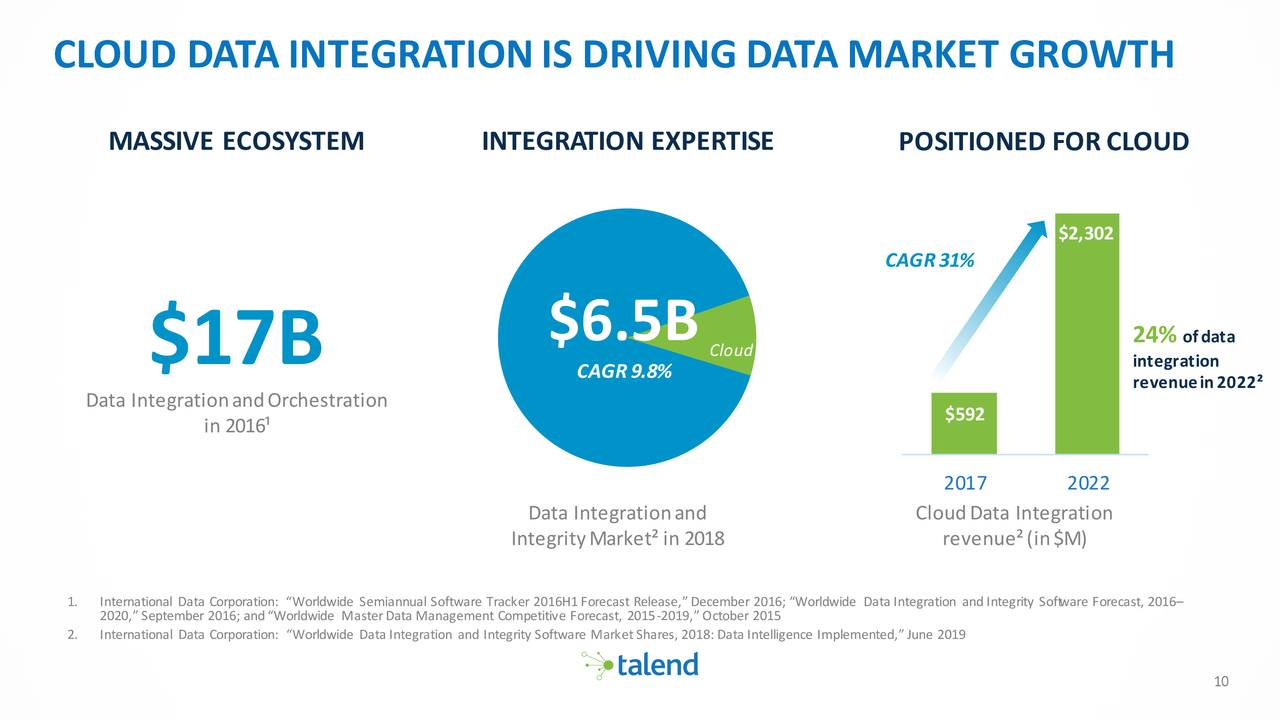 That 31% projected CAGR is double that of the overall data integration market, so it's no wonder the company sees the cloud as a prime imperative, here is management (Q3CC):

the most important thing that we can do as a management team, as a company is to get as much of our business to the cloud as fast as possible. Because that's absolutely where our customers are going and that's where their growth is going to be over the next 10 years.

There are a number of issues for the company here:

Revenue recognition from on-premise and cloud businesses differ, from the 10-K:

But in the end, it doesn't make a huge difference as the up-front part of the on-premise contracts is only some 10% of the contract value (resulting from the adoption of ASC 606), with the technical support rateable of the contract duration, from the 10-K:

Cloud grew by over 100% in the year ended December 31, 2018 compared to the prior period. The adoption of ASC 606 contributed to the increase in subscription revenue of approximately $4.5 million, as we recognized the license element of our subscription arrangements upfront, upon delivery of the license key.

The migration of its on-premise customers is starting, from the Q3CC:

We're starting to pilot migrating a small number of our existing premise customers to the cloud and we believe that the vast majority of our premise customers will migrate to the cloud in the coming years... our cloud expansions have actually been increasing over the last year at a really nice clip to the point where they're now materially higher than our overall expansions for the rest of our business.

The company has introduced a solution to automate migrations from on-premise to popular Snowflake cloud data warehouses and the availability of Talend Cloud on Microsoft (MSFT) Azure. Talend is ready for a host of different client configurations, from the earnings deck: 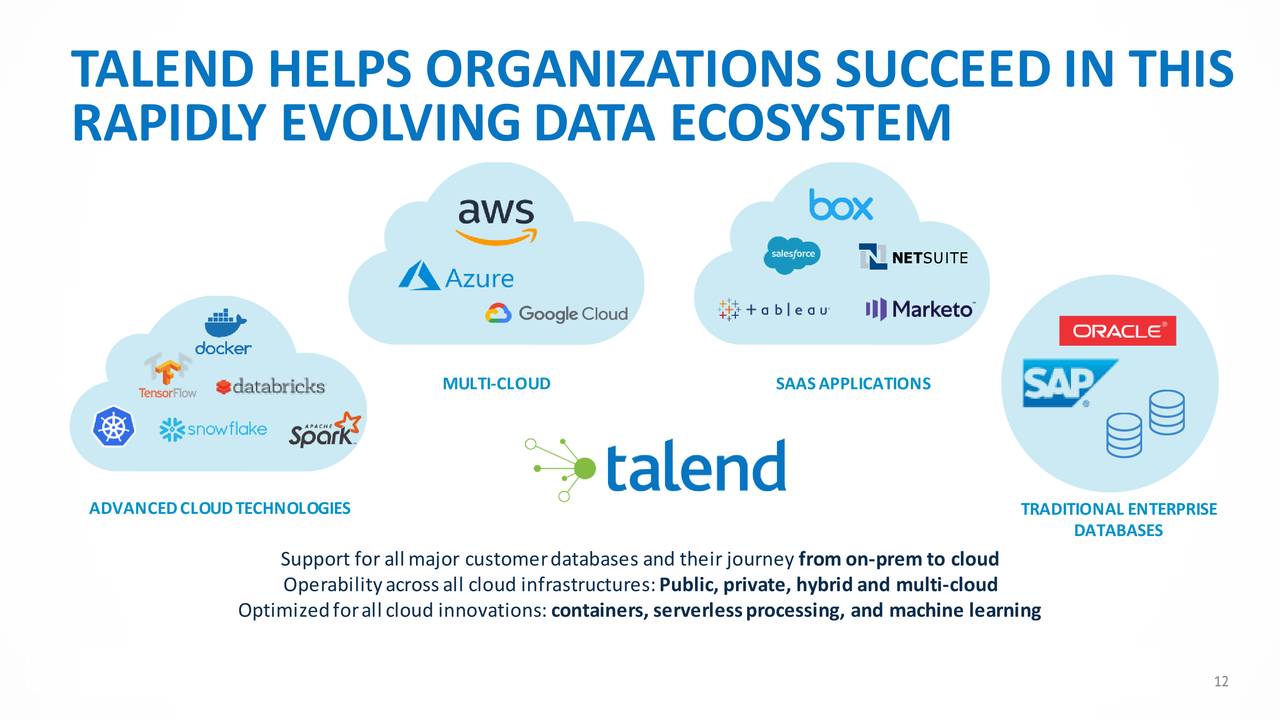 So while its cloud business is growing rapidly, it's coming at least in part at the expense of its on-premise business, it's almost half of new ARR (earnings deck): 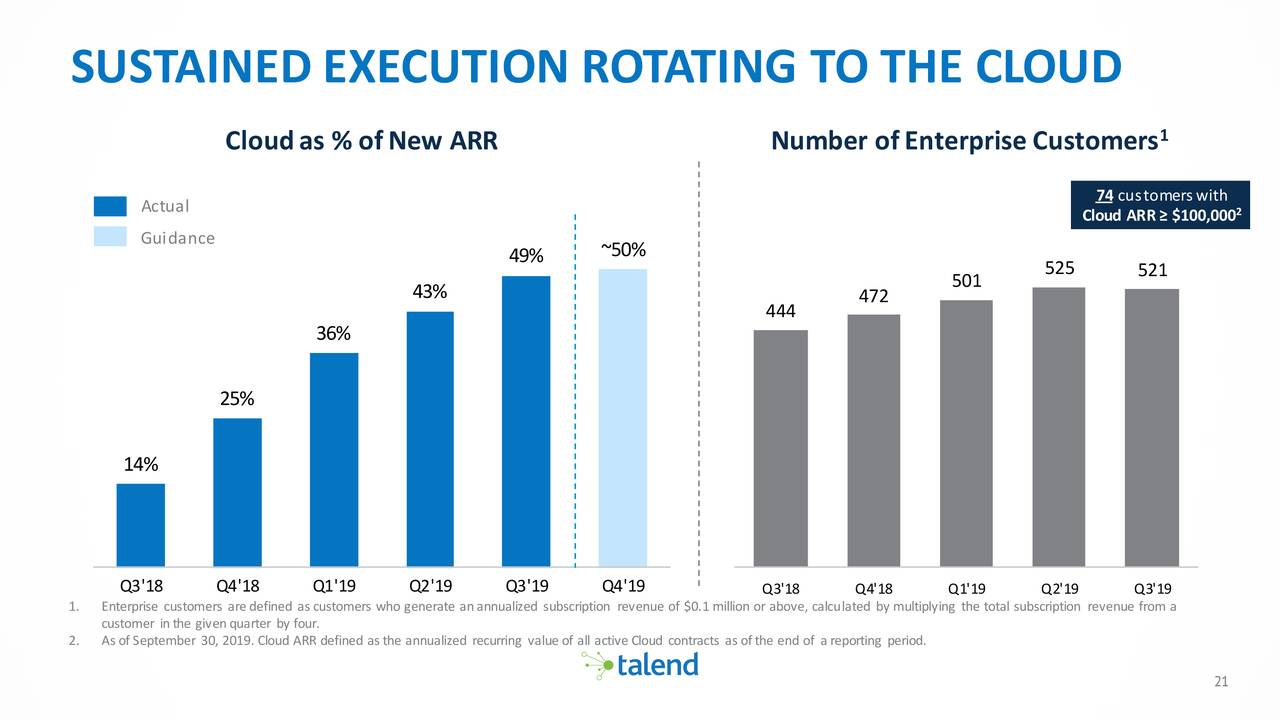 But because of the greater contribution of channel partners and reduced demands on professional services, the net effect is somewhat lower overall growth, at least for a while. At some point this is likely to reverse as the overall cloud business becomes bigger and its stronger growth and higher expansion rates start to overtake these negative transition effects.

Q3 was actually strong with a small revenue beat and non-GAAP EPS coming in $0.15 better than expected at -$0.08.

Its professional services grew just 1% y/y in Q3, which is the result of the shift to the cloud discussed above.

From the earnings deck: 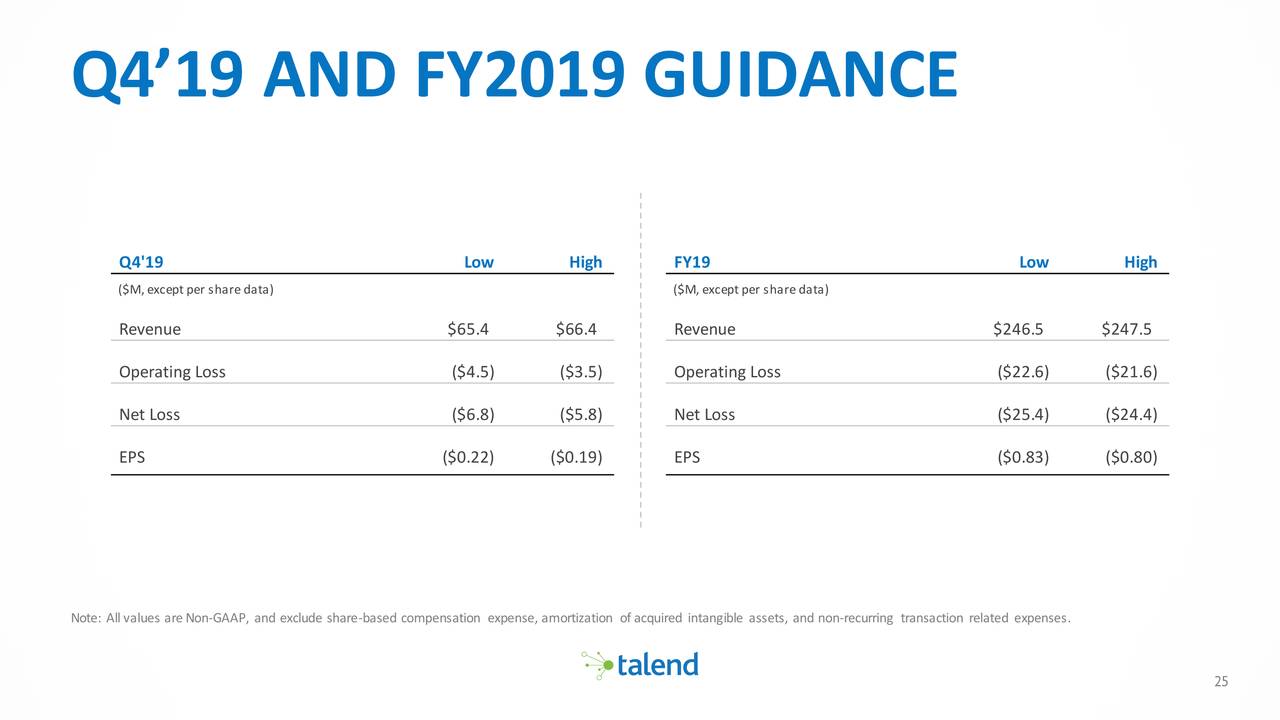 The GAAP operating margin remains well in negative territory even if its non-GAAP equivalent is much less dramatic at -4% in Q3, a 2% point improvement from a year ago. But there is still little sign of operational leverage kicking in.

A little more worrying is that cash flows have turned negative again (Q3CC):

Free cash flow for the quarter was negative $11.3 million, given the dynamics in Europe and the lower sequential ARR growth this quarter. We expect that free cash flow burn for the full year will be a few million higher than the $15 million we discussed in our prior call.

The cash flow is negatively impacted by the shift to the cloud, which eliminates the up-front license part, but this effect isn't huge as we have seen above.

The company can sustain this rate of cash bleed for years with cash and equivalents at a comfortable $172M at the end of Q3, thanks to a convertible note offering in September which brought in a net $149M.

Dilution hasn't been substantial but share-based compensation has taken off last year:

With the shares really quite reasonably priced and growth somewhat hampered by the transition effects of the shift to the cloud, we think that the shares are actually a reasonable buy here.

Keep in mind that the company isn't profitable and still displays little signs of operational leverage, and cash bleed has increased this year. On the other hand, while transition effect might dominate its headline business for now, ultimately the shift to the cloud is a considerable net benefit.