It's a widely-accepted fact that leverage increases the risk of a portfolio. On the surface, the idea makes sense. Think of an investment in the ProShares UltraPro QQQ ETF (NASDAQ:TQQQ) that has 3x exposure to the Nasdaq 100 (QQQ). Each day that the stock index is down 1%, TQQQ should be down 3%. Compound the results over a not-so-bullish and volatile period of time and a leveraged portfolio can easily end up in the gutter.

But, today, I want to explore one particular use of leverage that can actually decrease the risk of a portfolio substantially. I will call this strategy the "bulkhead" approach, an analogy to the partitions within the hull of a ship that can prevent the vessel from sinking by containing leakage to one single compartment. This strategy should allow a portfolio to participate in the upside of the stock market one-for-one, while protecting the downside against sizable losses - for instance, during a recession. 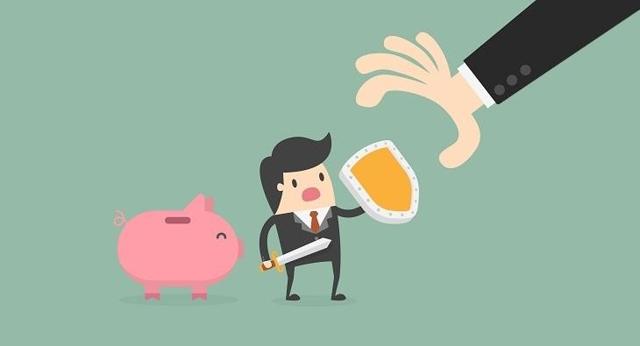 Here's an interesting fact that may seem useless at first: An investor can roughly replicate the performance of the Nasdaq 100 by holding a portfolio that is allocated one-third to TQQQ and two-thirds to cash. The logic is simple: Three times the Nasdaq divided by three should be equal the unlevered index. Portfolio Visualizer provides a good depiction of how this particular portfolio would have performed since 2010 (TQQQ's inception year) compared to the benchmark - see table and chart below.

Notice that the one-third, two-thirds portfolio rebalanced quarterly would have actually produced slightly lower annual returns than a pure investment in QQQ over the past 10 years: 16.9% vs. 17.8%. Part of the reason is the leveraged ETF's hefty management fee of 0.95% per year that one would not need to pay if simply holding a Nasdaq 100 fund. But, generally speaking, the portfolio's performance would have approximated that of the benchmark.

As a side note, an investor could have easily closed the performance gap by allocating two-thirds of the portfolio to equal parts short-term treasuries (SHY) and short-term corporate notes (VCSH) instead of cash, for barely any additional risk or extra volatility.

While mirroring the performance of QQQ by combining TQQQ and cash may seem pointless at first glance, there's one benefit to doing so that's not obvious:

Only one third of the portfolio would ever be exposed to the risk of total loss. This is the "bulkhead effect" at play.

Think about the dot-com crash, when the Nasdaq 100 lost 83% of its total value between the March 2000 peak and the October 2002 trough. The TQQQ position in a one-third, two-thirds portfolio (if the ETF existed back then, that is) would have been virtually wiped out. However, nothing would have happened to the other 66.7% of the portfolio that had been invested in cash. In other words, the strategic use of leverage in this case would have fully protected the investment against losses of more than 33.3%.

To explore the idea further, let's backtest the following "bulkhead" strategy over the past 20 years:

The infrequent rebalancing serves two purposes. First, it allows the bulkhead portfolio to stay protected against sharp drops in the equity benchmark over longer periods of time. Were the portfolio to be rebalanced daily, for example, the protection would all but vanish. This is the case because exposure to the Nasdaq would be continuously added to the portfolio during bear periods and recessions, as the benchmark dug deeper toward the bottom.

Second, infrequent rebalances allow the bulkhead portfolio to be more exposed to the Nasdaq when the benchmark is in bull mode. In other words, as stocks rise, the portfolio benefits by tilting more heavily toward the strong asset class. This creates a very similar, desirable effect to the "buy high, sell low" approach that I discussed at length in my most recent TQQQ article.

For clarity, different rebalancing rules could be used, such as doing so once per year or once at the end of each even year (i.e. 2000, 2002, etc.). Each approach would have produced different results over the past couple of decades. The key point, however, is that rebalancing should be done infrequently enough in order for the bulkhead effect to be meaningful.

It may help to analyze the graphs one piece at a time, using the labeled red circles above:

As the narrative above suggests, using a leveraged instrument plus cash to replicate the performance of the stock market can limit the damage done to a portfolio during severe bear periods. By preventing an investment from losing too much of its value during stock market unwinds, the portfolio can eventually recover off a higher base.

In addition to minimizing investor anxiety during painful bear periods, a bulkhead portfolio could even end up producing better absolute and risk-adjusted returns over time. This would have been the case since 1999, as the chart below depicts. 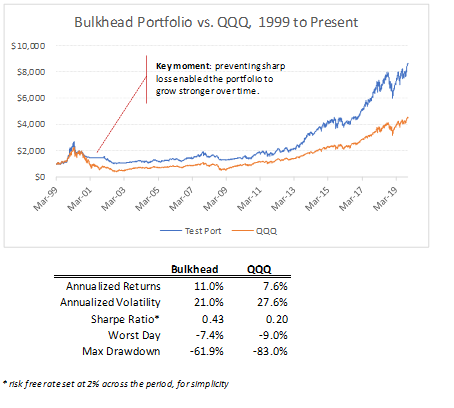 Maybe, now, the wise words of some of the most successful investors begin to make more sense:

The most important rule of trading is to play great defense, not offense - Paul Tudor Jones

Buying TQQQ for the long run and rebalancing the portfolio infrequently, on the surface, sounds like a terrible approach to investing. It seems counterintuitive and perhaps irresponsible to some, until one stops to think through the approach with more care and dig deeper into the math.

Most investors will likely never use the bulkhead approach to manage their portfolios, since it's so novel and uncommon. However, I believe that exploring (and eventually adopting) the strategy could lead to substantially better results over time.

"Thinking outside the box" is what I try to do everyday alongside my Storm-Resistant Growth (or SRG) premium community on Seeking Alpha. Since 2017, I have been working diligently to generate market-like returns with lower risk through multi-asset class diversification. To become a member of this community and further explore the investment opportunities, click here to take advantage of the 14-day free trial today.