By Evan Bauman and Margaret Vitrano

The already crowded video streaming market is about to get jam-packed with highly anticipated over-the-top offerings from Disney (DIS) and Apple (AAPL) launching this month. The new entrants will give U.S. consumers more than 10 streaming options while a new on-demand service from Comcast's (CMCSA) NBC Universal is just around the corner.

We believe increased competition in an environment that's changing so rapidly will cause certain companies to lose out. In a matter of years, we have gone from a "bundled" media market to a world that is unbundling with viewership fracturing across platforms. Budgets for original content have grown very large, primarily driven by technology players, causing the volume of new series to scale dramatically. Consumers are also changing their viewing patterns, watching more content delayed or on mobile devices.

For us, the value proposition today is investing in companies with exclusive content - intellectual property if you will - from standalone programmers like Discovery (DISCA) and AMC Networks (AMCX) and the larger, more diversified players like Disney and Comcast. Right now, the programmers are being hurt by the fear of cord-cutting where investors wonder how cable content will find its way to viewers. AMC - home of "The Walking Dead" franchise - for example, has nearly doubled its earnings per share since 2015, yet the stock is down.

Uncertainty about the changing distribution landscape is compressing multiples. What hasn't changed is the value represented by good content. Cable and media investor John Malone has spoken about consolidating the programmers, rolling up multiple properties and ultimately selling some of them to either the distributors or technology companies like Apple and Netflix (NFLX) that are looking for content and spending billions to develop or acquire it.

We have always tried to own intellectual property at reasonable valuations that ultimately can get monetized. The need for more content to support the explosion of direct to consumer offerings has already fueled consolidation in the sector. This includes Disney's acquisition of Fox, Comcast's acquisition of Sky and the planned merger of Viacom (VIA) (VIAB) and CBS (CBS). We expect to see more media deals in the future. Some companies may also go private because free cash flow yields are so significant right now. By purchasing media stocks at cheap multiples that are steady generators of free cash flow, we believe we have sufficient cushion to weather disruption and that shareholders will ultimately be rewarded for the durability of these businesses. 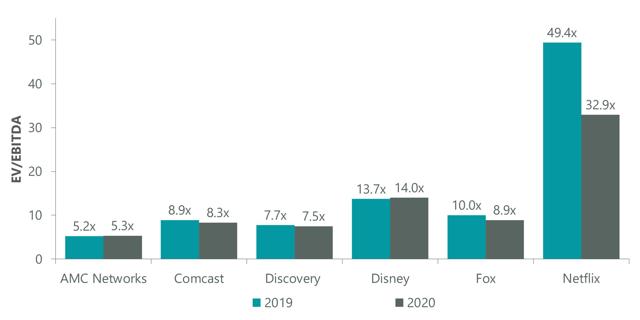 As of November 6, 2019. Source: ClearBridge Investments

The larger media players aren't as reliant on streaming as pure play companies like Netflix. However, we believe Disney+ could be the catalyst that enables Disney to remain a leader in the marketplace amidst changing media consumption patterns for years to come. The stock continues to trade at an attractive multiple and - assuming reasonable success from the company's over the top efforts - has a consistent track record of generating content very profitably.

For Comcast, broadband is driving growth as video, music streaming and gaming among other applications drive demand for fast connection speeds. The media conglomerate also benefits from a diversified base of distribution and content assets. The launch of Comcast's advertising - supported Peacock streaming service in the first half of 2020 - will allow it to enter the streaming market in a disciplined fashion.

In summary, while consumers are embracing new ways to view content, appreciation for and engagement with successful shows and movies remains healthy. Newer industry entrants whose business models are predicated on licensing and repurposing existing content could face challenges from not having enough binge-worthy new shows. However, companies that create portfolios of popular content, have the scale to fund premium offerings and pivot to offer that content in the way consumers want to view it, have a better chance of thriving over the next several years.

ClearBridge Investments
1.47K Followers
ClearBridge is a leading global asset manager committed to active management. Research-based stock selection guides our investment approach, with our strategies reflecting the highest-conviction ideas of our portfolio managers. We convey these ideas to investors on a frequent basis through investment commentaries and thought leadership and look forward to sharing the latest insights from our white papers, blog posts as well as videos and podcasts.
Follow

Disclosure: I am/we are long AMCX, DISCA, DIS AND CMCSA. I wrote this article myself, and it expresses my own opinions. I am not receiving compensation for it. I have no business relationship with any company whose stock is mentioned in this article.

Additional disclosure: Past performance is no guarantee of future results. All opinions and data included in this commentary are as of the publication date and are subject to change. The opinions and views expressed herein are of the author and may differ from other portfolio managers or the firm as a whole, and are not intended to be a forecast of future events, a guarantee of future results or investment advice. This information should not be used as the sole basis to make any investment decision. The statistics have been obtained from sources believed to be reliable, but the accuracy and completeness of this information cannot be guaranteed. Neither ClearBridge Investments, LLC nor its information providers are responsible for any damages or losses arising from any use of this information.