SPN’s Operations Improve, But Future Hangs In A Balance

Superior Energy Services’ (SPN) offerings include drilling products and services, onshore completion and workover services, production services, and technical solutions. The company’s leveraged balance sheet reflects considerable financial risks because of the high level of debt repayments in the medium-to-long term. I would not recommend considering the stock for a buy until debt reduces considerably and cash flows strengthen. 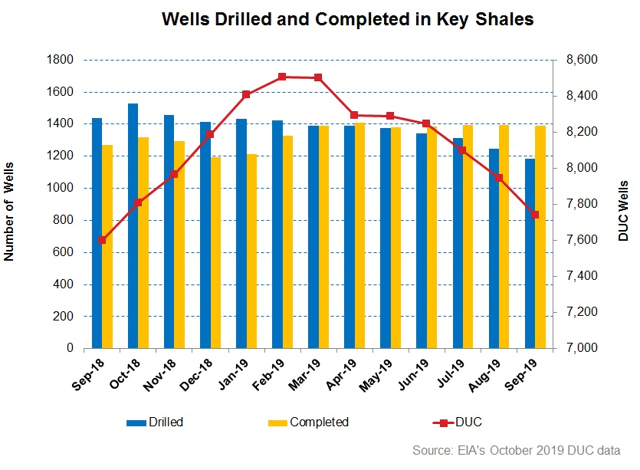 On average, the West Texas Intermediate (or WTI) crude oil price witnessed a 19% decline in Q3 2019 compared to a year ago. Led by the weakness in crude oil price, the DUC (drilled but uncompleted) wells (6% down) and drilled wells (12% down) decreased as opposed to the marginal rise in completed wells (1% up) in the key U.S. unconventional energy resources in September compared to June. The fall in the DUCs indicates a slower recovery in the completions activities, while the lack of new drilling also suggests that the pricing pressure continues. Also, the exploration and production activity has not seen adequate turnaround, because the upstream producers are quite likely to resort to another round of capex cut in 2020.

With the excess supply of pressure pumping equipment in the market, prices and utilization of pressure pumps remained low. The continued weakness prompted SPN to divest its entire drilling rig service line during 1H 2019. Currently, the company seems content to operate with a five-fleet pressure pumping portfolio after stacking one more fleet during Q3. Given the challenges in the hydraulic fracturing market in the U.S., the company has been continually reducing its exposure to the U.S. land market. As a result, its revenues from U.S. onshore decreased by 6% (after adjusting for rig sales), which was in line with the U.S. rig count fall during Q3. 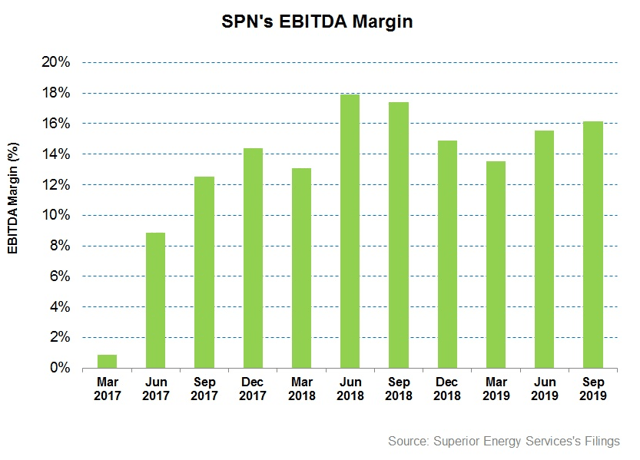 By lessening exposure on the U.S. pressure pumping business, the company also aligns its operational and financial strategies. Because of the ceiling in sales growth in the near term, it focuses on improving operating margins, improving return on capital and building cash balances. As the company lowered capex, its free cash flow (or FCF) increased to $21 million compared to a negative FCF a year ago. The policy to improve cash balance through operations and non-core divestitures will also help reduce debt, which will prompt higher shareholder returns.

Led by crude oil price volatility, SPN’s Onshore Completion and Workover Services segment revenue continues to underperform. It recorded an 11% revenue drop in Q3 2019 compared to the previous quarter and a 51% year-over-year fall. Since the start of the year, it divested the drilling rig service line comprising of 12 rigs, which resulted in significant loss of revenues. The segment continues to record operating losses for the past three quarters.

SPN would continue to struggle in this segment in the short term. With only five pressure pumping fleets working, the company may keep idling horsepower until the margin per fleet is more than the maintenance capital. The effect of the upstream capex decline will take its full toll in Q4, at which point the segment revenues and EBITDA are expected to decline further, although higher revenues from the fluid management business may help offset some of the loss.

In this context, investors may note that the company has initiated the process of integrating the well services and fluid management service lines. The process is aimed at increasing efficiency at the U.S. basins. Initiated in 2015, the strategy has reduced at least $10 million of annualized cost. As the company looks to build cash, particularly when its finances have become challenging, it may opt for further asset sales or divestment shortly. The company reckons that there are more opportunities in packaged services comprising non-drilling, non-frac service lines over the life of a U.S. onshore well.

Operations Where Performance Can Improve 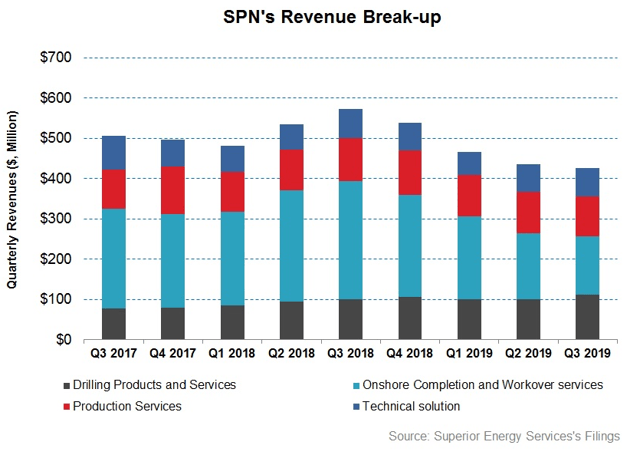 As opposed to the weaknesses in U.S. onshore, SPN’s international revenue is expected to increase in 2020. In U.S. offshore, we note that the completions activity grew, which benefited the company’s premium drill pipe and completion tools business. In Q4, the U.S. offshore business is expected to remain steady.

In the international business, too, premium drill pipe rentals spearheaded revenue growth. Since 2010, the company has been investing in product development in sand control completions, a technologically challenging activity. The breakthrough for SPN came in 2017, when it received a multi-zone single trip tool technology contract from Hess. Since then, it received several similar orders. The company can now generate profit out of this business, with returns consistently hovering at mid-20% range. It has recently invested in its machining capacity that is expected to improve returns. Over a more extended period, the company’s competitiveness in the international market will also improve. However, the international market is vast and diverse, and all the geographies will not move unilaterally. In Argentina, there are concerns over energy production in the unconventional shales in the short term. In contrast, the Middle East onshore and West Africa offshore are expected to produce robust revenues and returns. We can expect FY2019 international revenues to increase by 10% compared to the previous year.

SPN’s Drilling Products and Services segment gained ground in Q3. Year over year, the segment revenue increased by 12% in Q3 due to improved premium drill pipe rental revenues. In Q4, however, we may see headwinds pulling growth down. As the U.S. offshore activity mix shifts towards drilling activity, revenues and EBITDA can decline in the range of 5-10% compared to Q3.

SPN’s Technical Solutions segment was more resilient in Q3. While more robust U.S. offshore completion activity led to higher completion tool sales, lower well control and subsea intervention activity resulted in a 3.4% year-over-year revenue decline in Q3. The segment operating income also crashed (82% down year over year). However, investors should note that the segment operating income has been volatile over the past several quarters. If the company manages to increase the share of completion tool sales in Q4, revenues and EBITDA can go up by 10% in Q4 compared to Q3.

In the past year, SPN stock price crashed by 94%. On September 27, the company received delisting notice from the NYSE due to an abnormally low share price. Since then, it has been trading on the OTC (over the counter) market, and the stock price has considerably increased (560% up until November 3), but we can expect significant volatility as a result of such low price (currently it is trading at $0.32). To gain re-compliance, it needs to improve its financial and operational metrics. In addition to SPN’s effort to divest assets and reduce debt, the company has recently undertaken a share repurchase plan of $15 million. These initiatives to increase shareholder returns will help improve investors’ sentiment towards the stock.

In 9M 2019, SPN’s cash flow from operations (or CFO) was $116.5 million, which was a sharp improvement compared to a year ago. Despite a 16% decline in revenues, the CFO increased via growth in the company’s working capital, primarily due to lower accounts receivable.

In 9M 2019, the company spent $105 million in capex. So, its free cash flow turned positive in the first nine months of 2019 compared to a negative FCF a year ago. In Q4 2019, the company intends to limit capex and keep FCF positive, which can help achieve higher returns on invested capital.

The High Debt Level Is A Concern

SPN’s liquidity was $406 million (borrowings available from the revolving credit facility plus cash & equivalents) as of September 30, 2019. Leaving out any refinancing option, it will have $1.3 billion of long-term debt due for repayment between 2021 and 2024. Although there is no potential near-term financial risk, the company will need to improve its free cash flows significantly to avoid default on debt repayment in the medium-to-long term. So, its capex reduction program is a significant step towards generating FCF. However, even with positive FCF, the company is unlikely to avoid further stress on its balance sheet given the significant debt load.

SPN’s debt-to-equity ratio (8.9x) is significantly higher than that of its peers. Basic Energy Services (BAS) and Oceaneering International (OII) have lower leverage (2.3x and 0.6x, respectively). Dril-Quip, Inc. (DRQ) has no debt. 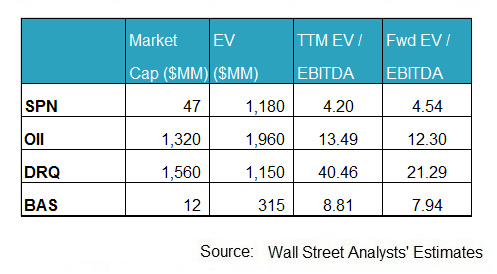 SPN’ forward EV-to-EBITDA multiple expansion versus the current EV/EBITDA is in stark contrast to peers, which is due to sell-side analysts’ expectation of a decline in EBITDA as opposed to a rise in EBITDA for peers in the next four quarters. This would typically result in a significantly lower EV/EBITDA multiple compared to peers. The stock’s EV/EBITDA multiple is lower than its peers’ (OII, DRQ and MDR) average of 20.9x. I have used estimates provided by Seeking Alpha in this analysis.

According to Seeking Alpha’s Quant Rating, the stock receives a “Neutral” rating. Its rating is high on value and EPS revisions, while they are moderate-to-poor on growth, profitability and momentum. I think Seeking Alpha’s assertion of a very low rating on profitability is conservative. Although the company is recording losses at the net income level, EBITDA has been positive for many quarters in the past. Also, compared to some of its peers, the profitability rate has not been lower. I would rate the EPS revision lower than Seeking Alpha because SPN's earnings missed analysts’ estimates thrice out of the past four quarters. I think its relative valuation multiples are reasonably placed, as I discussed earlier in the article, and so, I would rate its value lower than Seeking Alpha.

What’s The Take On SPN?

In 2019, Superior Energy Services has reduced frac fleets and divested the drilling rigs service line following the pricing pressure in North America. To boost sales and margins, it has been concentrating on improving its international operations. In 2H 2019, higher activities in the Middle East and West Africa offshore will push revenues. It also focuses on integrating the well services and fluid management service lines. New opportunities in the repackaging services may also boost sales. Also, a resurgent offshore market can improve the company’s outlook in North America.

SPN’s leveraged balance sheet is more leveraged than some of its peers. The stock has been delisted from the NYSE due to the price crash in the past year and a weak balance sheet. Unless it manages to refinance the debt, increase cash flows sharply and divest the non-core assets, I would not recommend considering the stock for a buy.

We hope you have enjoyed this Free article from the Daily Drilling Report Marketplace service. If you have been thinking about subscribing after reading past articles, it may be time for you to act. The oilfield is at its low ebb, and now is the time to be looking for winners.

Good news for new subscribers! In November, we are offering a 10% discount off the annual subscription rate of $595.00

A 2-week free trial is applicable, so you risk nothing. Hope to see you in the DDR as we look for bargains in the oil patch!

Badsha Chowdhury
1.11K Followers
I have more than 14 years of experience in analyzing and writing on stocks. I write on both long and short sides in an unbiased manner. I have been covering the energy sectors for the past 7 years, with the primary focus on the oilfield equipment services sector. I also cover the Industrial Supply industry. I occasionally co-author with Seeking Alpha contributor Thomas Prescott.