We looked at Atomera (NASDAQ:ATOM) in June and noted that the company, which developed a technology called MST for speeding up transistors, achieved a technical break-through and was gaining traction with chip designers trying out its technology. 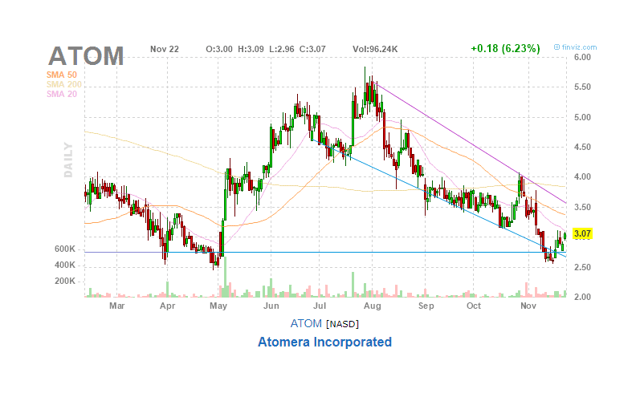 We briefly described the MST technology in our previous article, but a much more comprehensive take comes from SA contributor Vision and Value, which we highly recommend for those interested in how the MST technology works and how it fits in the semiconductor industry.

The company has really substantial IP. Over the last 12 months, it has grown its number of patents granted and pending from 184 to 230. 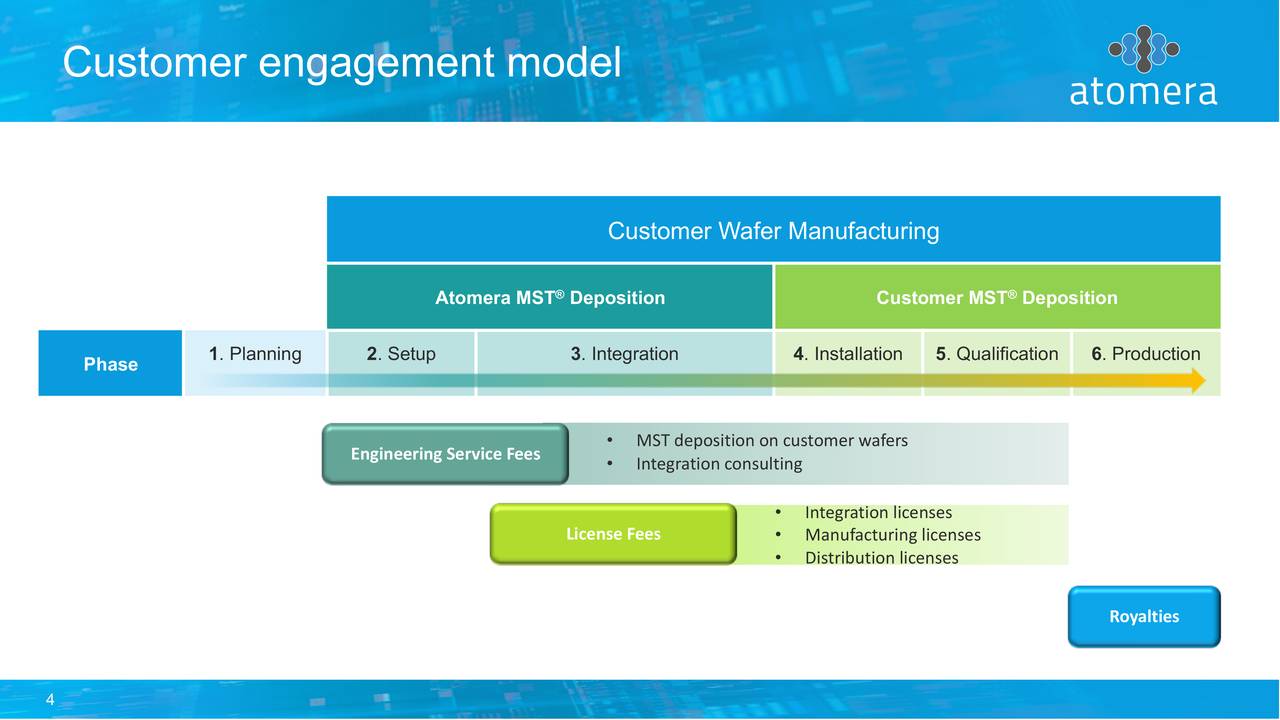 Customers can be distinguished into five phases. From the Q3CC (our emphasis):

Phase 1 includes customers under NDA who are planning an evaluation of our technology. In phase 2 we deposit MST film on customers' wafers and conduct physical characterization. Phase 3 is where customers incorporate MST on their wafers during an R&D run in their fab and use the test results to justify licensing our technology. It is generally in Phase 3 that we are most likely to sign integration licenses with customers. Phase 4 where customers execute a manufacturing license and install MST on EPI tool in their fab and in Phase 5 customers get a distribution license and transition to production.

Below you can see how the number of customers in the different phases is growing (earnings deck): 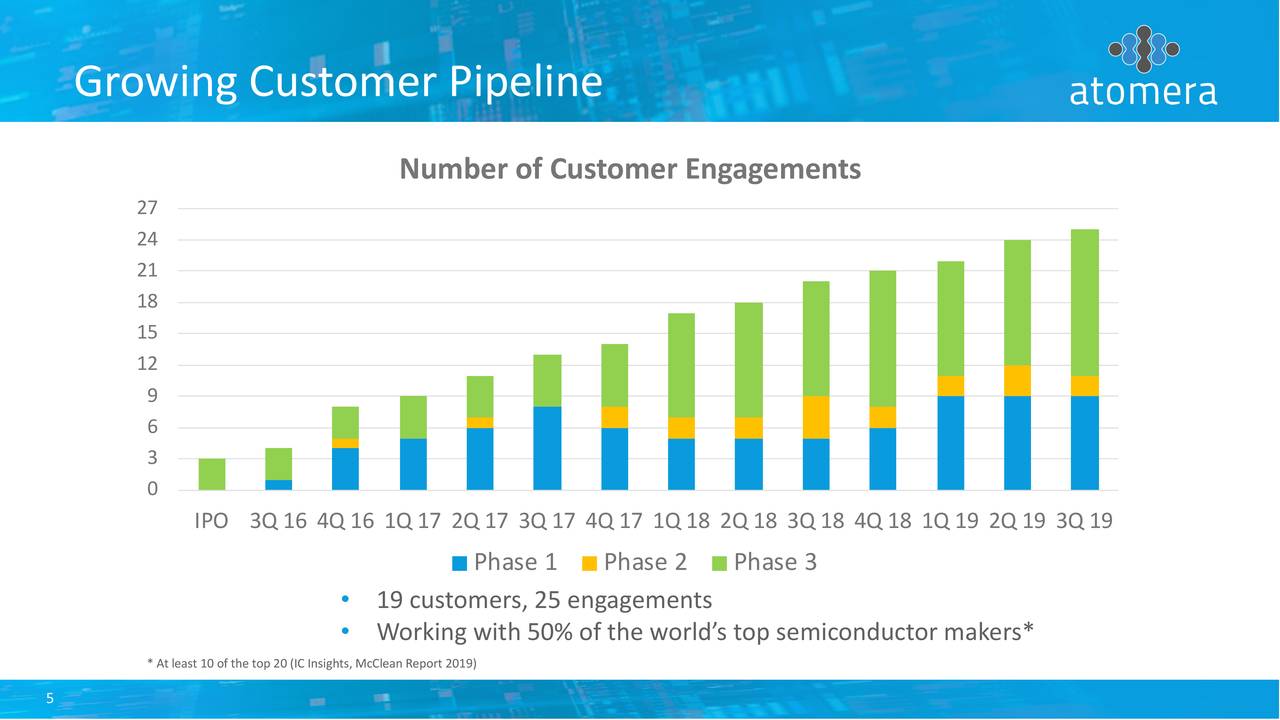 With at least 50% of the top semiconductor companies somewhere in this graph as customers in different phases, one might wonder why the company is earning so little revenue still. From the earnings deck: 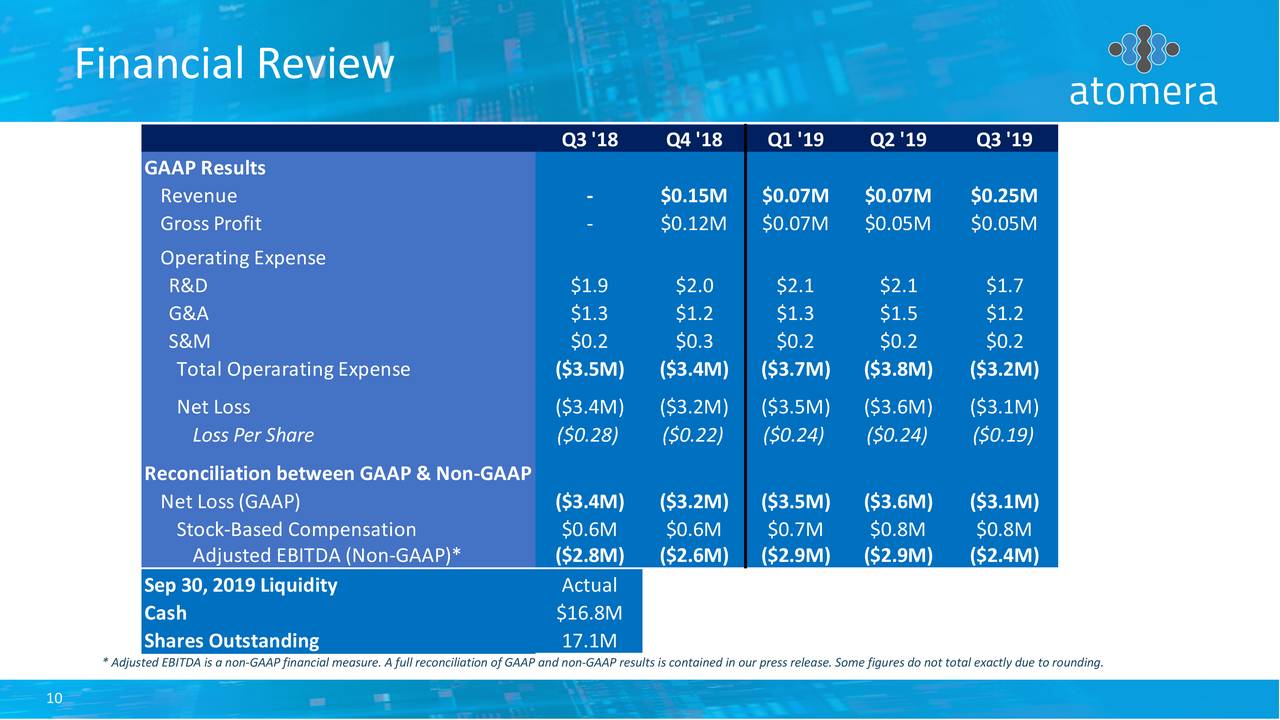 There are several categories of revenues:

Most of the customers are still in phase 1-3 where revenue streams aren't terribly significant. The money is in the licenses and royalties (phase 4 and 5) There are three different types of license grants:

On October 30 of this year, the company announced a new licensee, which has the following characteristics (Q3CC): 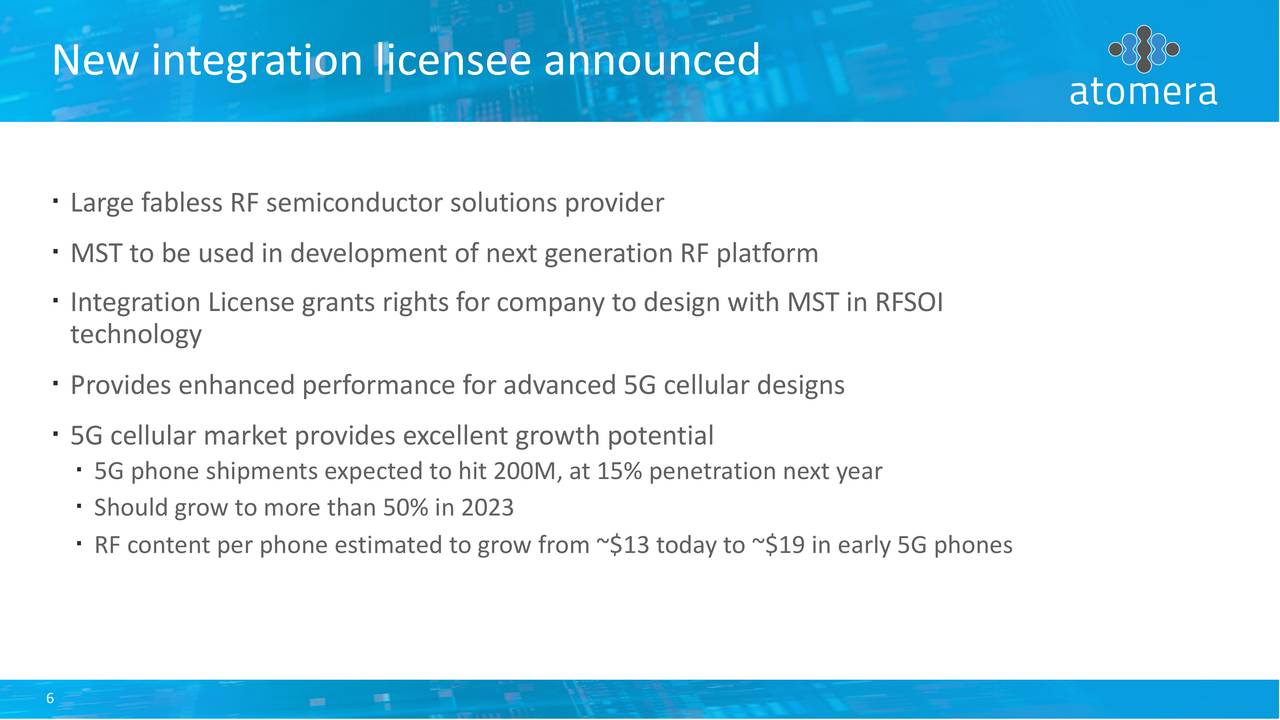 The good news doesn't end there. Apparently this company is so large that while fabless it has allowed to have established its own proprietary manufacturing process with its foundry partners.

This opens the door directly to demonstrating Atomera's MST technology with this foundry partner. Surely, an interesting proposition. Here is management on the Q3CC:

You can imagine that if an important customer requests their foundry to implement MST we may immediately get a higher priority than if we are trying to convince that fab on our own... as the foundry gets to know us and the benefits of our technology, they would want to engage with us directly to make a technology that they would sell to the rest of the market.

There is also the fact that the company has two versions of its MST technology (earnings deck): 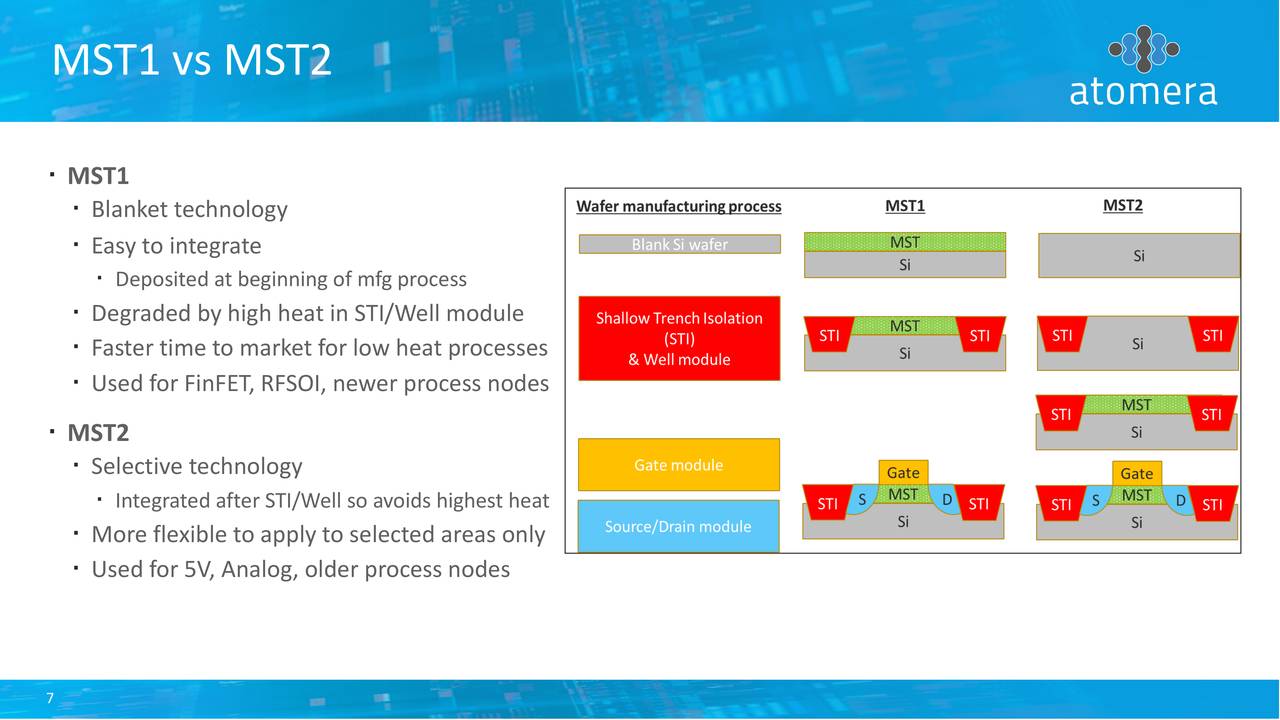 MST1 has the advantage that it is easier to integrate in manufacturing processes, but it can suffer from heat degradation. Luckily, the market seems to be evolving towards this (Q3CC, our emphasis):

Generally speaking, if a wafer can be manufactured using MST 1, we believe it will be easier to integrate and we'll give Atomera faster time to revenue. But MSC 1 will only be an option where the customers' process uses a lower DT regime. As a rule of thumb newer process now generally uses lower temperature profiles. So 28 nanometer is usually manufactured at lower temperatures then 65 nanometer.

This is about it for the good news. There are two main problems or risks for investors:

What worries us quite a bit is that the company has already two (now three, but the third one was only acquired at the end of Q3 and isn't in the accounts) licensees, and these are significant names (STMicro and AKM), but that hasn't really moved any needle insofar as revenues are concerned.

Revenue really needs to increase by an order of magnitude, and we're supposing that this will happen when the clients move to acquire distribution licenses and Atomera will start to collect royalties.

That hasn't happened yet, and there are no ironclad guarantees that actually will happen, but the increasing interest in the technology is at least encouraging. Here is management (Q3CC):

The customers and programs we are working on today are each very high potential and capable of making the company successful on their own. When we get these folks into production we will certainly be a powerful IP provider to the semiconductor industry and a much more valuable member of the semiconductor ecosystem.

The Company's operating plans for the next 12 months include increased research and development headcount and increased spending on outsourced fabrication and testing. Based on the funds it has available as of the date of the filing of this report, the Company believes that it has sufficient capital to fund its current business plans and obligations over, at least, 12 months from the date that these financial statements have been issued...

The company is going to lease an additional EPI tool to use for both customer wafers and internal R&D (Q3CC):

About a $75,000 a month increase with incremental R&D on tool and headcount.

So it has cash for about another 12 months, and if there are no distribution licenses and royalties emerging in that time, it will have to go back to the market. The level of dilution has actually been fairly modest, given the lack of revenues:

Atomera is promising, as its technology is gaining interest by some of the biggest names in the industry. However, as long as these interested companies that are evaluating the MST technology are not including it in their production lines, the company isn't going to thrive, as revenues from pre-production agreements are simply too small for it to survive for long.

The most that can be said is that the increasing interest does increase the likelihood of customers incorporating the technology in their production lines, but there can be no guarantees here. So this is only for those intimately familiar with the technology who can handicap this with a greater degree of certainty, or investors that love high-risk, high-reward situations.