Even with the business management change coming from Cirrus Logic (NASDAQ:CRUS) recently, we still see a company with strong potential financial growth. With, in our view, the investing thesis moving from a more crisp financial modeling toward trust, management's continued willingness to communicate business direction with magnitudes seems paramount.

Since 2008, Cirrus has moved away from clear business investments at least three times. It once sought to enter the higher voltage and power DC control market finding it too fragmented. A few years later, after investing heavily in LED lighting, again it chose to close up shop due to heavily fragmented markets. Cost issues for its major product also may have played a key role in the switch. Again, at the September conference and after several years of development, Cirrus moved significantly from continuing development of its MEMs Microphones. The future of the microphone business is now in evaluation. It could continue at some smaller level, development of technology might be continued, the technology might be sold, or a temporary slowing of the development could be restarted. The company promised more answers in January. Each of the mention markets was of significant in size from possible billions to hundreds of millions. With abrupt direction changes, investors question management competence. One of the analyst, Ruben Roy, The Benchmark Company, LLC, at the last call posed his question, "Last quarter, you guys talked about continuing to work with the lead customer and getting a supply chain going in Taiwan. Just to be clear, is the MEMS effort completely done at this point?" His straightforward question opines some investors' feelings.

Let's be clear. We don't expect perfect vision from any management. We do expect an amount of nimbleness in resource reallocation. In this most recent circumstance, management engaged in its yearly review for allocations. It must have become apparent that earlier and larger opportunities needed additional support. Jason Rhode, Cirrus' CEO, commented:

we're just looking at such an overwhelming array of opportunities in front of us. . . And the reality is, we -- if we executed perfectly on MEMS going forward, it still would be unlikely to be as good or as big of a return on investment as some of these other opportunities . . ."

The company continued, "we've pretty significantly expanded the total SAM that we're pursuing. ." This is in line with our expectations. A vector for growth was dropped, but new larger growth vectors appeared. Our long-term accuracy for predicting revenue growth with Cirrus has always been through both expected successes mixed with abrupt successful direction changes. This recent change fits with our experience.

So, what growth vectors continue and what are the economic values? In past decades with Cirrus, it most often had only the resources to develop one growth direction. If that failed, so did Cirrus' growth. From the inclusion of several critical company changes, among these are vision and a great place to work, Cirrus used its early Apple cash flow in developing several directions including: haptics, digital amplifiers, a closed-loop device, and product family, headsets and voice biometrics. It appears that three of the five are hitting the ground running and running hard being haptics, digital amplifiers, and closed-loop control. One, headsets, is marching forward, but slower than early beliefs predicted. Unfortunately, the jury is still out deliberating on biometrics. Cirrus took the let's throw out lots of valuable technology and see which sticks approach. Several have, but not all, yet.

Once again, we include two slides, the SAM slide and the ASP range slide illustrating for us the vectors and value. Before we begin our analysis, the company in recent reports continues to model effective tax rates at 15% and long-term margins at 50%. With a tax rate of 15%, the cash generated factor is 85%. 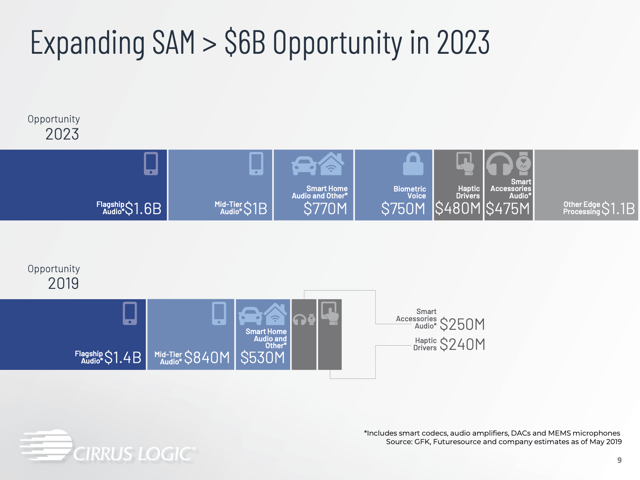 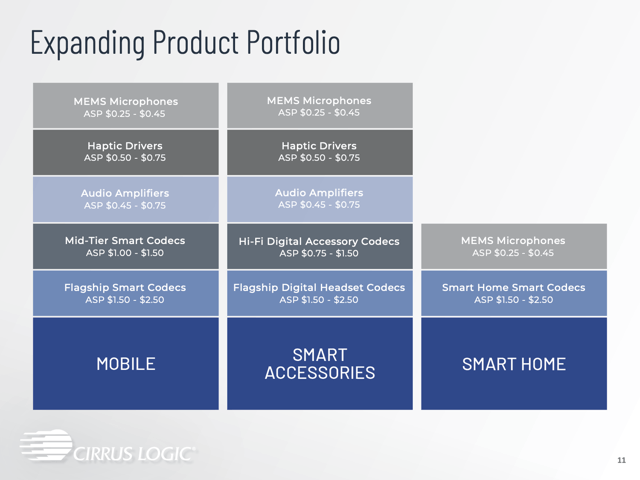 From the conference call, it is clear that design wins are continuing, development for increasing the ASP continues, and the market is broadening into other markets. "It is a viable technology for gaming controllers, probably the more interesting discussions we've had over the last couple of quarters are other applications..." Continuing Cirrus noted a "recently launched flagship in Korea adopted [Cirrus] haptics for the first time." The future profit value could be $500 million times 50% (winning half the 2023 market SAM) times 50% margin times 85% equaling approximately $100 million.

Sizing the amplifier market size is difficult at least for us. It also just changed with Cirrus' announcement for a headset win. We suspect that the major change in Cirrus' mid-range content will be from amplifiers. At this point, Cirrus has very little content in this range. In the short term, the shareholder letter added, "Given our momentum and pace of innovation in boosted amplifiers, we anticipate revenue from this product line will increase on a year-over-year basis in the second half of FY20."

During the last conference call, Blaine Curtis, of Barclays, asked for help with the ASP for the new closed-loop device. Rhode answered, "I mean, it's probably a little -- it's smaller than a codec, but I would say probably more valuable than an audio amp." So with the codec low end at $1.5 and the amplifier high ranged at $0.75, the ASP is probably between $1.00 and $1.25. It must be noted that even if the ASP is lower, Cirrus continues to gauge the total potential market at $1.1 billion. The company still expects the first product to ship in approximately 12 months down three months from the last quarter's prediction. We expect this product to start shipping with Apple next year. Our revenue estimate from a closed-loop win next year follows: 200 million iPhones unit times 70% times $1.25 times 50% margins times 85% equaling $75 million in cash. The long-term potential remains at $1.1 billion times 80% (our guessed penetration factor) times 50% margin times 85% equaling approximately $400 million in cash.

Cirrus updated its progress during the October conference call. Several new headset devices will be launched during the next few quarters. Some of the headsets will include the active noise cancellation (ANC) chip. Between Apple and Samsung, Cirrus probably has about $200 million in revenue. In total with the ANC chip now launching with several customers, Cirrus's total revenue is probably near $220 million or most of the 2019 claimed opportunity at $250 million. The 2023 opportunity at $450 million tells us that Cirrus still expects this to grow at some modest rate over the next 4-5 years.

Predicting a time for the first voice biometrics product launch seems more fuzzy. When asked about timing, Rhode answered that customers are still trying to establish how to implement the functionality. Some push back from vendors on using the total chip functionality seems in play. Adding further detail from some of the customer responses, "And it turns out that customers, a lot of them where they might have aspirations of doing the voice biometric stuff on their own, the anti-spoofing thing is something that very clearly needs to be done all the way up front, largely done via an analog mic input . . .." It appears that Cirrus is working on some sub-products with lower ASPs.

Other Products Excluded from Our Long-term Analysis

Cirrus is expecting significant amplifier wins with tablets. Again from the shareholder letter, "We are shipping in several recently-introduced products and anticipate additional high-volume tablets to come to market over the next 12 months." Other targeted products excluded from our analysis are smart home and some wearables. Revenue generated from these products will be added when appropriate.

For the coming next 24 months, we expect Cirrus to gain significant revenue from haptics, amplifiers, and the closed-loop device. For us, it is difficult to measure the wins for haptics and amplifiers in non-Apple devices. The following table contains a history of Cirrus' non-Apple revenue.

Our hope was to find helpful patterns that might predict future growth. We found nothing in our experience. Although we still expect continued year over year growth with Android products, we don't know how much. We still expect over time that it could be very large.

Several past changes did appear. We found the effect when Samsung purchased a lower ASP codec a few years back and last years' amplifier win. With Cirrus announcing a haptics win from a South Korean company, we expect that to be Samsung. Heading into the beginning of the year, we also expect a Cirrus haptics chip in the Galaxy phone. The value might be $30-$40 million (Samsung tends to sell approximately 60 million units per year between its two premium products. At $0.75 a part, the win represents $30-$40 million.)

It seems to us that over the next six quarters, Cirrus might grow cash flow in the $250 million plus range from new design wins. It could be much more. There is a lot we can't see. What happens to voice biometrics? How many new Android phones will Cirrus add? The window inside these possible numbers is still fuzzy, but companies just don't convert one product. Generally, in time, they convert all.

We find ourselves lacking insight into the timing for amplifiers. We get it; Cirrus is starting to win with this product in all the major OEMs, now eight of ten including the largest four. Trust in management seems much more important. In particular, comments offered by management in the January quarterly report about future growth seem paramount.

Finally, we created a table intended to be more long-term in realistic potential.

Again, several miscellaneous opportunities were purposely left out: growth in smart home, tablets, some wearables, and headsets. The total value of these according to the included slide reaches toward a billion. We just can't get a crisp handle on when and how much Cirrus can penetrate. But even without the leftovers, the reasonable potential adder of $17 in earnings creates a $300 stock price potential. We said this a few years ago in our first article on Cirrus. We are much more confident today. We acknowledge that the means through which Cirrus could create this is different than first purposed. For us, that has been standard operating procedure.

There are several factors that might derail our estimates including macroeconomic issues, trade issues, unforeseen unknown technologies, or unaccounted for competition. We have tried to mitigate risks using lower penetration rates and excluding some of the product lines which potential now seems fuzzy.

In our view, with new business from the haptics and amplifier markets less crisp to size and time and the more fuzzy nature with voice biometrics, we find ourselves again more reliant on managements abilities to communicate critical investment information. In particular, the timeliness and accuracy of the two included slides have become paramount. The potential for financial growth is still huge. Yet, the vision still seems clear and could head toward a stock price potential of $300.

Patient Tech Investor
2.44K Followers
I have been an investor for several decades enduring the 87 crash, 2000 crash, and 08 crash. I do use trading systems developed with TradeStation. I have enjoyed the rewards from both buy and hold and trading. My professional experiences includes several decades as a process control engineer. I hold a JD from an eastern law school.

Disclosure: I am/we are long CRUS. I wrote this article myself, and it expresses my own opinions. I am not receiving compensation for it (other than from Seeking Alpha). I have no business relationship with any company whose stock is mentioned in this article.