Apple (NASDAQ:AAPL) is up just over 54% on the year, almost twice the performance of the S&P 500. The Cupertino-based company has racked up just short of $467 billion in market capitalization through the third week in November as investors took the stock to new highs. The YTD surge is larger than the market capitalization of JPMorgan Chase (JPM), America’s largest bank by assets. The year’s total catapulted Apple to the top of the heap by market capitalization among publicly listed companies, nudging out Microsoft (MSFT) last week.

Apple’s pole perch is all the more revealing given its less than stellar financial performance to date — its worst showing since FY2016 when net sales fell 7.73%. Total net sales are down just over 2% through the end of September at $260.2 billion. Net income for the 12 months ended Sept. 28 is down, finishing at $55.3 billion. Operating income is down almost 10% to $63.9 billion. Diluted EPS is down 0.17% to $11.89. Dividend payouts, however, jumped 10.29% to $3.00/share. Similarly, dividend payouts jumped 10.10% in FY2016. In April, the company allocated from $100 billion to $175 billion of which $96.1 billion has been spent through the end of September, funded in large part by by last year’s repatriation of $252 billion under the tax holiday created by the Tax Cuts and Jobs Act (2017). A full 92,629 shares were purchased during the period. In FY2016, the company repurchased 63,316. Apple shares are up just over 25% since April’s buyback announcement. The company shares were up just under 22% through the end of December 2016 after that year’s April buyback announcement. Apple shares landed in overbought territory in the last week of October through the second week of November (see Figure 1, bottom frame) with the appearance of peaking at $267 with Monday’s market close. The slow churn of profit-taking is sending the stock to the downside. The slide should continue. 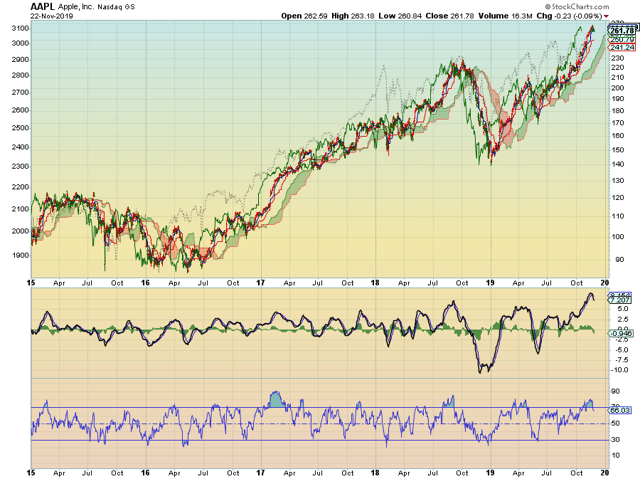 Increasingly, Apple’s hardware lineup appears to be slowly shedding its relative price inelasticity. The company is now adjusting to a world where people are holding on to their smartphones and assorted devices for longer periods of time. The company is also adjusting to the realization that the overall market sports a greater variety of choice on both price and technical wizardry. OLED displays on the high-end iPhone 11 Pro and 11 Pro Max are superb for watching movies and TV. Similarly, ultra-wide camera lenses are a boon for photography. The technologies are largely lost in most other daily usages. The expense of such technology does not make upgrades or first time purchases a causal, point-of-sale decision. Narrowly defined markets pose certain costs that even cellular networks offering financing, subsidies and payment plans struggle to overcome. Geographic diversification also has limits. Europe (down 3%), Japan (down 1%) and China (down 16%) provided much of the iPhone’s downside picture, with the Americas (up 4%) and the rest of Asia Pacific (up 2%) logging the upside through the end of September. Apple’s China market is under siege as US-China trade tensions and tariffs assessments continue to take their toll. Apple’s iPhone cash cow dropped 14% YOY to $142.3 billion from a peak in 2018 of $164.8 billion in total sales. As a consequence, the iPhone has dropped from 62% to 55% of total revenues in the course of a year. In 2016, the iPhone was 63% of total revenue, down from 66% in 2015.

The Mac desktop is another hardware case in point. Never more than 1% of unit sales and 4% of total sales even prior to when Apple stopped breaking out PC from laptop unit sales in 2012, last week’s visit by President Trump to Austin was telling. Earlier in the year, Apple announced a new rendition of the Mac Pro that, once again, was slated to be assembled in the US. Apple first needed a host of waivers from tariffs already in place on its supply chain that continues to be deeply embedded in China. In September, the US Trade Representative office complied. A beaming President Trump lauded the manufacturing return to the US. Market share for the Mac through the end of the 3rd quarter came to 7.5% on 5,101 units shipped worldwide, a 3.7% drop YOY. In the US, Mac shipments came to 2,186 units for a 14.8% market share, up 0.2% YOY. The desktop tower retails for $6,000 and the specially designed monitor adds another $5,000 to the total cost. The monitor stand sells for $1,000. Overall, Mac sales came to $26.7 billion for a 2% YOY gain for FY2019.

Outside of another $78 billion yet to be spent on its current stock repurchase authorization, forward Apple growth clearly depends on the company’s successful pivot to services and leverage of those services to the estimated 1.4 billion active iPhones, iPads, Apple TVs and Macs around the world. AppleTV+ is now available for $4.99/month, a fraction of Netflix's (NFLX) basic plan. With a current lineup of just nine original shows, Apple's streaming service is hardly a threat to Netflix or Disney (DIS) over the intermediate term.

Then came last week’s news. Richard Plepler, a 28-year veteran of HBO with 160 Emmy awards to his credit that left the company last February, is rumored to be in advanced talks with AppleTV+. Plepler’s hire would run hand in glove with Apple’s quest to leverage its delivery hardware advantage, creating a potentially explosive new revenue source for the company. Apple will surely match Disney’s offer of up a year’s free subscription to its streaming service, in Apple’s case to every new or updated purchase of a company device — an estimated 217 million in 2018 — on top of the 1.4 billion active Apple device users worldwide.

A similar tale can be spun with regard to Apple Music. Founded in 2015, Apple Music boasts about 60 million paid subscriptions to its music and podcasting services. It, too, has outsized hardware advantages stemming from the now proverbial 1.4 billion active iPhone, iPad, AppleTV+ and Mac users worldwide. The access to music, however, is still the providence of the big three labels — Universal, Warner and Sony — which in turn control about 14% of the Stockholm-based, market streaming leader Spotify (SPOT). SPOT revenue comes from two provided services. The company’s paid subscription service claims 113 million active users. The company’s non-subscription service counts 135 million active monthly users where targeted, algorithmic advertising comprises the company’s revenue stream from which about 30% of the company’s paid subscribers derive. Advertising revenue came to $172 million through the end of September.

To date, Apple Music has no “free” venue segueing to a subscription-based format. The absence of a free platform and the lack of advertising attached to its podcast segment allows Spotify relatively free rein in podcast and music advertising, opening up potentially lucrative income streams in the process. Podcasting is all about finding an audience. While an uninspiring observation at first glance, technological reach and algorithmic patterning truly makes the world a stage irrespective of how niche the production might be. Similarly, traditional TV advertising provides a broad medium for name recognition over a particular geographic footprint. Efficiency comes when marketers can target, for example, households with children under a certain age or people shopping for particular goods or services or even send different messaging to different households streaming the same podcast. Apple Music has latent growth potential in the area of targeted advertising across the myriad demographic profiles the service reaches worldwide on a daily basis.

The strength of Apple’s balance sheet is the envy of most. Apple has about $205.9 billion in cash, cash equivalents and marketable securities through the end of September. As we have seen, the company generated $63.9 billion in operating income for the period. Its average borrowing costs on its commercial debt is 224 basis points. By comparison, Disney’s effective borrowing costs come to 334 b/p while Netflix’s tips the scales at 513 b/p. Apple still needs to show the market, decisively, that the company is serious in forging this new service path. Apple will need to spend money, and lots of money, in relatively short order to make up for its late entry to its new field of play. A possible Plepler hire adds fuel to Apple’s sparse original content equation to date. Competition in the space will intensify over time. Apple will need to sustain outsized levels of spending well into the future. Hollywood will salivate with the attention.

Apple’s service revenue stream will also depend heavily on the successful rollout of a seamless, vertically integrated delivery of service to its 1.4 billion device users. The new generation of OLED displays on high-end Apple devices could diminish deliverable streaming quality to older generation Apple devices. Worse, it could exclude them altogether. The latter possibility could reduce the 1.4 million horde of targetable devices significantly. The seamless technological link needed for horizontal integration between Apple’s iOS and myriad competing operating systems also needs to be addressed if the company pursues streaming capability outside the Apple community. Annoying technical bugs and glitches are an inevitable byproduct and represent strong headwinds to success in the endeavor. Apple’s successful pivot to services clearly remains a work in progress.