Oil services companies' fees for services and equity values have always been cyclical as oil market conditions ebb and flow. But this time, they are in a secular decline. "The oilfield services industry has fundamentally changed. Companies will no longer be able to generate the high operating margins they did in 2014," according to an S&P report.

Oil producers have become more efficient, able to do more with less. Much has been made of the fact that the rig count is dropping and U.S. crude production is leveling off. However, there have been efficiency gains that have more than made up for the drop in the rig count. 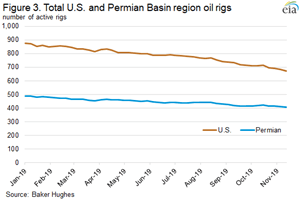 However, the Energy Dept. is still projecting growth in production for 2020: 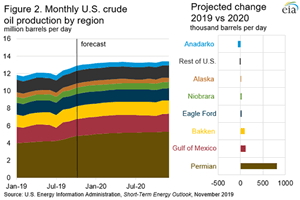 Continental Resources (CLR) stated in their 2Q19 earnings call that:

Our crude oil production growth is running ahead of schedule and we expect average production for the year to be in the upper-half of our original guidance. We have also achieved the efficiencies throughout the first-half of 2019 that will allow the reduction of drilling rigs from 19 rigs in SCOOP STACK to 12 rigs on early fourth quarter of 2019. This 37% reduction in our southern rig fleet was made possible by the step change in performance from our Springer and Woodford rig fleets in Project Springboard. I am proud that our teams can exceed production estimates with lower rig activity, that is operating and capital efficiency at its best."

CEO Harold Hamm also opined that "we're probably 100 rigs more U.S. than is needed today." And the work is being done by far fewer workers, according to new studies. The number of fracking crews is down 20 percent from last year in the Permian Basin.

Rystad Energy has estimated that supplies of U.S. fracking gear will exceed demand by about 68% by year's end. Schlumberger (SLB) said on its 3Q19 earnings call:

We expect seasonal weakness in North America as the fourth quarter develops. We are anticipating a year end slowdown in North America similar to last year due to operator budget constraints. However, this year the activity reduction has started earlier than last and we anticipate the second should decline in Q4 to be more pronounced than last year.

At the same time, the U.S. production growth rate has declined for the last eight months and it is expected to drop further in 2020 as a result of the reduced activity this year. Therefore, and that's sort of a recession…"

Hess (HES) was asked on its 3Q19 earnings call, "How do you see cost evolving for future projects, the efficiency side of the equation versus the service cost outlook?" John Rielly responded,

If you look at the deepwater offshore service sector, it continues to be over-supplied, given the extended period of low activity. And as you mentioned, I think also the industry's focus on efficiency and simplification and standardization continues to drive unit cost down. So as a result, we expect to see minimal cost inflation on that front."

The VanEck Oil Services ETF (OIH) is trading below $12, around its lowest point historically. And it might look attractive to contrarians. However, I would caution investors from trying to pick a bottom. There is no light at the end of this tunnel, except for what might be an approaching train.

According to Yahoo Finance, the 10 largest holdings of OIH are:

The current price is up from its low a couple of months ago. But investor sentiment in E&P companies has soured as investors expect peak oil demand to arrive perhaps within a decade. The sector is not a long-term growth prospect, in my opinion. Companies are transitioning to smarter, digital technology, and drilling efficiency appears likely to continue, if not accelerate.

"Servicers need to focus more on digital technology, switching from diesel-powered frack equipment to electric and generally improving the quality of their gear. Doing so could lower costs by 25-35% over the next five years," according to an analyst at Wells Fargo.