With no room for overseas expansion, Jack in the Box Inc. (NASDAQ:JACK) is under pressure to boost revenue as U.S. fast-food chains are locked in a battle to defend their domestic market share. Notwithstanding the declining margins, the value-focused strategy has lifted JACK's same-store sales growth to a record high. Even though the revenue outlook for fast-food chains remains solid in a cooling U.S. economy, more pressure on margins is likely for JACK amid deep discounting required to sustain the comp growth, wage inflation, and franchisee incentives. However, the recent refinancing transaction has eased the tight debt repayment schedule, positioning JACK, one of the least-leveraged firms among peers for a debt-driven growth spree.

The ambitious long-term growth targets remain in place. However, their feasibility looks unclear, especially given the declining revenue, sliding margins, and stagnant growth in outlet count, therefore, justifying a modest forward EV/EBITDA multiple in a relative valuation scenario. In combination with the consensus EBITDA estimate for FY20, JACK's minimum, average, and median forward EV/EBITDA multiples for the last five years suggest a premium ranging from ~0.6% to ~8.6%. The modest upside is not adequate for an outright 'Buy'. However, as the company expects to clarify its capital plan early next year with more color on future strategic growth, it is still appropriate to 'Hold' the stock.

The Burger Wars are raging, and the competition is tense in the U.S. QSR (Quick Service Restaurants) sector, where the fast-food chains poach each other to defend their domestic market share. The operators such as JACK without an overseas presence are facing an uphill battle to sustain their growth. With ~94% of its outlets franchised, the QSR hamburger chain based in San Diego, California, operates 2,243 restaurants spread across 21 states and Guam.

According to Euromonitor International, between 2013 and 2018, the restaurant count in the U.S. limited services sector has notched up by 1.1%, while the total spending and the number of transactions also by 4% and 2%, annually on average, respectively. In contrast, JACK's outlet count has largely remained flat over the period, while, on average, the ticket size has expanded by only ~3%, and the number of transactions has declined by ~2%. The below-par performance reflects in JACK's stock price, which has declined ~9% in the past year compared to ~8% gain in the Russell 2000 index.

At the start of FY19 (2019 fiscal year), JACK lacked a clear strategic focus, and the heavy debt repayments were imminent. The franchisee-discontent was growing, and in the middle of the first quarter of 2019 (Q1 FY19), the company had just shifted to a value-focused strategy, justifying the 'Neutral' rating in my last article. The stock has risen only ~1% since then cf. ~9% of the S&P500 Index and ~2% of the Russell 2000 index. With the recent release of 10K for FY19, it's time to revisit JACK to see if any major developments in the subsequent period warrant a change in the rating.

Peppered with the add-ons to boost the check size, the company continued its value-oriented strategy in the rest of the FY19 to drive foot traffic. As a result, the average check size stood up 3.1% from the previous year, while the number of transactions dipped 1.4%, a deceleration from the prior year. Consequently, the system-wide same-store sales rose by 1.3%, the highest since FY15. The top-line growth reached ~9% YoY (year-over-year), following the steep ~20% YoY decline in FY18. However, the top-line expansion turns out to be a ~10% decline when adjusted for the franchisee contributions for advertising, a revenue component added following the adoption of the Accounting Standards Update ("ASU") 2014 - 09, Revenue Recognition: Revenue from Contracts with Customers. In terms of the store count, JACK managed to open only 19 new stores during the year, despite 2019 guidance last year forecasting 25- 30 new stores system-wide. However, the net store count increased by only 6 as 13 locations put up shutters. 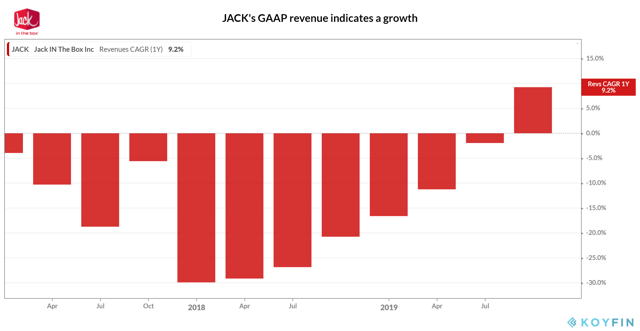 The same-store sales growth target of 1.5% -3.0% for FY20 as part of the guidance suggests a further expansion to the system-wide same-store sales in FY20. However, unlike previously, during the recent earnings call, the management declined to comment on the sales performance in the first few weeks of the current fiscal year. Concerned over a soft start to FY20, the investors reacted promptly, dragging the share price ~4.95% during the day.

Value-Focused Strategy in a Cooling Economy

The company is strategically now more focused, banking on the value deals to grow foot traffic while up-selling the diners to margin-friendly add-ons to improve the ticket size. To that end, JACK is on course to introduce a new product line targeting the value-conscious diners, replacing the discontinued 2-for-$1 taco deal. However, the long-term plan envisioned in Q3 FY18 for $4B of system-wide sales by FY22 now needs ~5% CAGR (compound annual growth rate) over the next three years. Given that the system-wide sales growth ranged from ~-1% to ~+1% YoY in the past three-year period amid stagnant net new stores, JACK needs to step up the comp growth. With the same-store sales rising, and the target for another 25-30 new locations in FY20 remaining unchanged, the company has rightly restructured its existing capex allocation from tenant improvements to an incentive scheme for franchisees.

The defensive nature of the QSR industry in a cooling economy could, however, support JACK's plans for expansion. According to the latest data from the Commerce Department, the job creation year-to-date has slowed this year compared to the last, and the unemployment rate in October 2019 has ticked up to 3.6% from 3.5% in the prior month. Meanwhile, the wage growth has plateaued driving down retail sales and prompting analysts to revise down their fourth-quarter 2019 GDP forecast to the lowest level since the corresponding period last year. Notwithstanding the cuts to discretionary spending, the U. S. consumer will, however, continue to spend on essential items, positioning the value-focused QSR players such as JACK at an advantage.

Despite the strong comp growth, both the restaurant level gross margin and overall operating margins have declined by ~16bps and ~74bps, respectively, from the previous year to ~26% and ~22%. Amid a cost-cutting drive, which has already resulted in two senior executives leaving the company in early 2020, the narrowing margins suggest heavy discounting to boost traffic. Meanwhile, the EPS for the year has narrowed ~1% YoY, even though the company repurchased 1.4M shares in FY19.

Despite the accelerated comps it expects for the year, the company currently guides to a restaurant-level margin of 25% for FY20, a further decline from FY19. The management seems to be uncertain over a substantial sales expansion that could meaningfully impact the margins. The wage inflation is forecast at high single digits for the year as the minimum wages in California, where 80% of JACK's outlets are located, are estimated to climb by ~7% in 2019. Add, the costs from the franchisee incentive scheme, the operating expenses are set for a sharp rise next year. However, due to intense competition, JACK is unable to pass them down through price increases, pressuring margins further. Meanwhile, at the mid-point of the guidance, the adjusted EBITDA is forecast to remain stagnant in FY20, questioning how feasible the ~300M of adjusted EBITDA targeted for FY22, which, as of now, needs ~4% of CAGR over the next three years.

Despite the declining earnings, JACK has increased the dividend payout ratio from ~18% in FY14 to ~46% in FY19. Further dividend increases require stronger cash flows, especially given the company's intention to return ~$0.6B more cash to shareholders as part of its long-term target set in FY18 to return over $1.0B by FY22. Assuming a third will be returned in FY20, it will be ~25% higher than in the previous fiscal year and ~81% higher than the current cash and cash equivalents, highlighting the significant cash outflows required amid dwindling margins.

However, in July 2019, JACK refinanced the term loan and the revolving credit facility together worth ~$1.0B, through a securitized financing transaction of ~$1.5B. It pushed back the sizable debt repayments scheduled for FY21 as of FY18. One of the least leveraged companies among peers, the transaction further enhanced JACK's cash position to brace for challenges in narrowing margins, higher payout needs, and capex requirements for a stepped-up expansion. 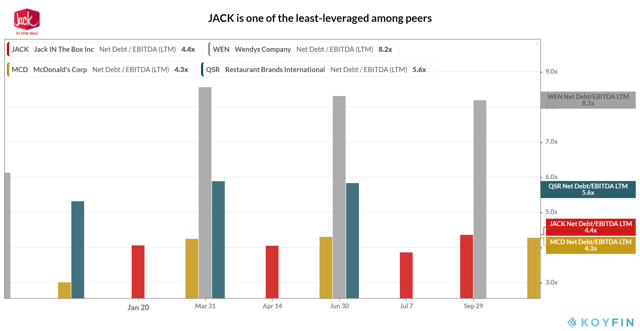 Therefore, given the recent Fed rate cuts and lower leverage, JACK can rev up its expansion drive through more debt to consolidate its competitive position to capitalize from the slowing economy. Furthermore, the company expects to detail a capital plan early next year. Commissioned for margin improvements and further acceleration of same-store sales, it will clarify JACK's franchisee incentive scheme and the plans for process improvements among others.

In terms of forward EV/EBITDA ratio, JACK currently trades at a massive discount of ~35% on average to its peers in the QSR industry. The discount looks justifiable, with the company trailing the peers as the below data for the LTM (last-twelve-month) period shows. For valuation, however, I have considered the JACK's historical forward EV/EBITDA multiples over the last five years, considering minimum, average, and median values in the range. Given the grim outlook amid declining margins and the adjusted revenue growth, I have ruled out the maximum value.

In combination with the current consensus EBITDA forecast of ~$270M, the multiples chosen indicate that JACK's premium could range from ~0.6% - ~8.6%. Furthermore, in line with the company's plans to repurchase 30% of outstanding shares over the next five years, I have assumed a decline of ~7% YoY in the number of diluted weighted average shares outstanding next year. While the moderate premium does not warrant an outright 'Buy', the capital plan to be unveiled early next year will clarify the path forward to achieve the ambitious goals. Therefore, at the very least, it is still wise to hold the stock until then.

Sources: The Author; Data from Seeking Alpha and koyfin.com

Despite posting the highest same-store sales growth in four years, JACK's adjusted revenue has slumped from the past year. The margins are also on the wane, notwithstanding the efforts to contain costs. The Burger Wars in the home market are stunting the growth and narrowing the margins. JACK's ambitious long-term goals remain in place even though the path for their achievement looks hazy. However, the recent refinancing has afforded room for more debt-driven growth in the low-interest-rate environment. Given the defensive nature of QSR stocks in a cooling economy, it is still wise to hold the stock until at least the company unveils the capital plan early next year.

Dulan Lokuwithana
1.52K Followers
A research analyst with CFA (US) Level I & II qualifications, and CIMA (UK) full qualification, Dulan primarily covers Health-care and Restaurant Stocks for Seeking Alpha. A Graduate in Human Biology, Dulan's expertise in the industry refines his Health-care analysis, and the sheer passion in cuisines spices up the Restaurant sector coverage. With a focus on medium to long-term investment horizon, Dulan hopes to uncover investment opportunities in mid-cap to large-cap stocks less well covered by the analysts.