Investing on the Spectrum
1.07K Followers

Carrols Restaurant Group, Inc. (NASDAQ:TAST) became the largest Burger King ("BK") franchisor in the US through a merger with Cambridge Franchise Holdings, announced on February 20, 2019. Also, TAST is a franchisor of Popeyes.

We cannot talk about TAST without first talking about BK and understanding its strategy. Since 1967, BK changed ownership several times. That year, BK was sold to the Pillsbury Company. After several mergers, Diageo plc (DEO) became the owner of BK. In 2002, Diageo sold BK to a consortium of Bain Capital, Goldman Sachs Capital Partners and Texas Pacific Group. In 2010, 3G Capital took over BK via a leveraged buyout, and that is where our story starts.

In 2012, 3G offered a portion of the BK to the market while maintaining control. Later in 2014, BK merged with Tim Hortons becoming Restaurant Brands International (QSR).

But let's go back to 2010. Daniel Schwartz started as the CFO of BK. After BK IPOed in 2012, 3G named Daniel Schwartz as CEO, he was 32 years old. When Daniel took the reins, he replicated the strategy used by 3G when Inbev acquired Anheuser-Busch. He slashed overhead in the Miami HQ, sold the corporate jet, streamlined operations and most importantly, he doubled-down on the franchise model. (source)

Why did he double down on the franchise model?

Having said that, I will analyze QSR in a future article. Here, I will focus on TAST and whether being a franchisee for Burger King and Popeyes is an attractive value proposition. There is too much noise around the TAST story. Some bet on the recovery of margins, the pickup in sales from introducing the Impossible Burger to the menu, the synergies of the newly merged company or growth through acquisition of more stores. Focusing on those points is short-sighted. In this article I will take a big-picture view of the business and why, even if all of the above events occur, TAST is worth 1.2x its invested capital, offering just a 16% upside.

The market is staring at the trees

Back in 2017, when the stock was over $15, TAST was my favorite short. At the end of 2016, TAST's invested capital was 373m, meanwhile, its enterprise value was 755m. An EV/IC multiple above 2x is high for a franchisee business (as I will explain in detail in this article). I closed my short too early at around $10 but still profited from it. At the time, the market was worried about same-store sales, food inflation and growth while forgetting the long-term economics of the business.

Right now the market is suffering from the same short-sightedness. The correlation between the stock price and EBITDA margin is high as can be concluded from the graph below. 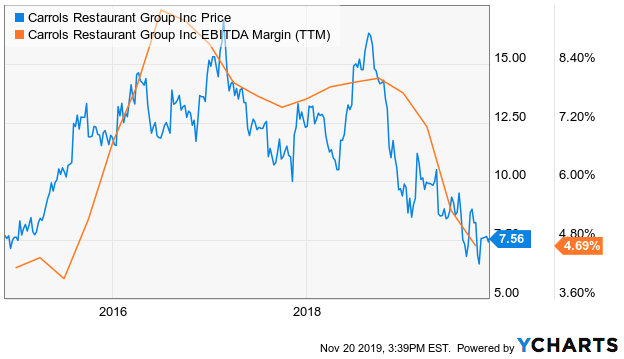 That is why the market is trying to find out whether the synergies of the latest merger are 25m or 30m, and trying to understand the impact of introducing the Impossible Burger to revenues.

I will prove that those factors while impacting the short term, are meaningless in the long term. For example, average sales per transaction increased by 7.5% to $7.37 in two years, but the gross margin decreased from 19.3% to 17.8% in the same period. The company blames wage increases and food inflation for the compressed margins, which are partial explanations.

Other investors are looking for TAST as a growth company consolidating the BK stores in the US market. As we will see later, TAST paid a fair price for those stores and lately has been overpaying. If that continues, it will cause the fair EV/IC of TAST to drop to 1.0x.

Being a franchisee in foodservice is a bad proposition. Before selling your first burger, you have to invest between 1.8m and 2.4m as described in TAST's 10-k:

In fact, in 2018, 44% of QSR revenues were generated by the sales of products, supplies and restaurant equipment to the Tim Hortons franchises (Besides BK, QSR owns Popeyes and Tim Hortons). On top of that, QSR has a nice margin on those items that increased from a gross margin of 21.6% in 2016 to 22.8% by 2018.

What a great business... for the franchisor. No wonder QSR is outperforming TAST.

But the franchisors are not stupid, it is not in their best interest that the franchisees go bankrupt, but also, are not interested in leaving money on the table by letting the franchisee have double-digit returns... they want the franchisee to have enough to survive. In bad situations, franchisors have demonstrated to be flexible with their franchisees. An example that comes to mind was earlier this decade when McDonald's waived the royalties that Arcos Dorados Holding Inc. (ARCO) had to pay for the Venezuelan operation (source). But when things are good, franchisors try to increase royalties, marketing expenses or force the franchisee to open new stores.

So let's put some numbers to this. Below is a table where I try to estimate the returns and the implied EV/IC multiple for each business model. Keep in mind that while the franchisee model is close to TAST's numbers, the franchisor model IS NOT the model of QSR. That is because QSR figures have some exceptions to the typical franchisor model. For example, the 4% contributed by TAST to the marketing fund of QSR is not spent all right away, it may be spent in another period. Also, I assumed the WACC of the franchisor 80bps lower than the franchisee, in the case of QSR it could be different. Note that the leases are included in the costs and have not capitalized the operational leases, that point will become important later in the analyses. Finally, I assumed growth at zero as it is a per store model and in real terms. The purpose of the table is only to contrast the economics of the two models and that the franchise has returns close to the cost of capital.

Before you go all ballistic about the EV/IC of 165x for the franchisor, let me clarify. I have not included the cost of developing or acquiring the brand. Here I am assuming that the brand was a gift to the franchisor. Think about it as the marginal EV/IC for the franchisor. In the case of QSR, QSR paid 4b for BK, 11.3b for Tim Hortons and 1.8b for Popeyes (source).

Interestingly, the average price of the acquired stores by TAST from 2014 to 2019 was $703k per store or an EV/IC multiple of 1.4x, this implies that TAST paid a fair price for those stores.

This means that more than half of TAST stores were acquired at the fair price leaving no upside for TAST. That implies that the capital deployed on those stores has no incremental value for TAST shareholders, that is, an EV/IC of 1.0x. The older and organic stores can have a value of 1.4x as we calculated before. So the fair EV/IC for the entire capital of TAST is the weighted average of 1.2x.

At the end of 2018, TAST adopted an accounting standard that capitalizes the leases. That resulted in 819m of operational and financial leases to be added to the balance sheet and are considered as debt, that is why you see a jump in TAST debt to 1.3b. But for our analysis, we will ignore that number and only consider the financial debt of 476m.

If we add or not leases to invested capital won't change the final answer. If we add leases to the capital, we should change the WACC, remove the rent expenses and remove the capitalized leases from the resulting enterprise value. So in the end, the numbers should be similar.

One could argue that TAST should be worth an EV/IC of just 1x. While the organic stores have a 1.4x value, the other stores have been acquired at the fair price (or overpaid in the last couple of years). As TAST has declared a growth strategy through acquisitions, they could overpay for those stores averaging down the consolidated multiple close to 1x.

My article sounds too pessimistic about the franchise model, that is not my intention. My intention is to value TAST's business removing all the noise that is in the market. While TAST is not a great business, it is an okay business. Also, being the largest franchisee for BK in the US ensures that QSR won't let you go underwater and will come to the rescue when needed. However, they won't make you rich.

For me to invest in an "okay" business, I require a significant margin of safety and a 16% upside is not enough. But if the stock dips below $6, I may start building a position.

Investing on the Spectrum
1.07K Followers
"Price is what you pay, value is what you get"Here is my advice:1. Save 10% of whatever you make, no matter how insignificant it can be. As a young engineer, I saved 10% of my income no matter if it was $10 or $1,000. PAYING YOURSELF is the best piece of advice you can give anyone. I recommend the book 'The Richest Man in Babylon', it is a bit repetitive but entertaining and gets the point across.2. Invest in your competitive advantage. If you are an oil veteran, you should be investing in E&P companies and not in biotech start-ups. If you want to diversify, pay someone to give you advice on other sectors or buy ETFs with the right exposure. As for me, I graduated very young and worked in transportation and consumers as an engineer. Post-MBA I worked for one of the largest hedge funds covering sectors such as natural resources (including oil & gas), TMT, consumers, industrials and transportation. After that, I was a finance executive for Fortune 500 companies leaders in the consumers and TMT sectors. So you will never see me investing in financials, education or healthcare. I get exposure to those sectors via ETFs and professionals I trust.3. Don't trade but rather invest. Once I left the hedge fund world, I started an asset management firm for family, friends and HNWI. I was able to manage this fund while having extremely demanding roles by investing in the long term. When I buy a company, I just sell if my investment thesis is not valid anymore. Thus, I would just dedicate my Saturdays to reviewing my portfolio and exploring new opportunities. 4. Do what you love, not what makes the most money. You may leave money on the table in short term, but you will be happier in the long term even if you make less money overall.In my spare time, I like reading, rowing and enjoying life.