The weight of the Electric Power sector in the natural gas market continues to grow.

NG/Coal spread has declined, meaning that natural gas became more competitive (vs. coal) as a "feedstock" for electricity generation.

Coal-to-gas-switching currently stands at around 5.9 bcf/d, some 0.7 bcf/d above five-year average and as much as 2.7 bcf/d above last year's level.

Wind, hydro, and solar generation can displace no less than 5.0 bcf/d of potential natural gas consumption in the Electric Power sector in December.

Total natural gas balance in December should be substantially tighter than last year by around -6.7 bcf/day.

In one of our previous articles, we explained why natural gas traders should care about the latest trends in the Electric Power sector and what indicators they should be monitoring. In this article, we would simply like to update you on some of the latest trends.

As you know, Electric Power sector is the primary consumer of natural gas in the United States. Its share in the annual demand structure is more than 31%, while its share in the injection season demand is close to 50% (see the charts below). 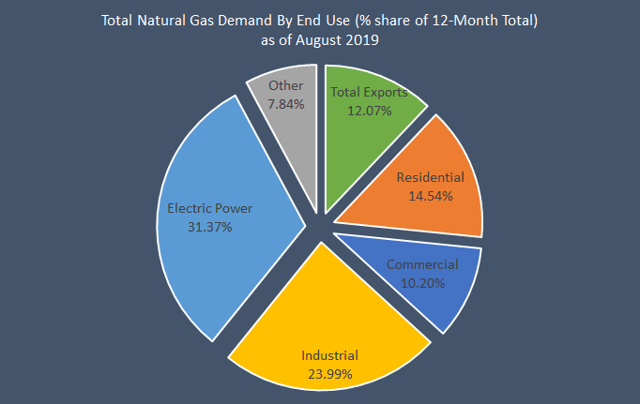 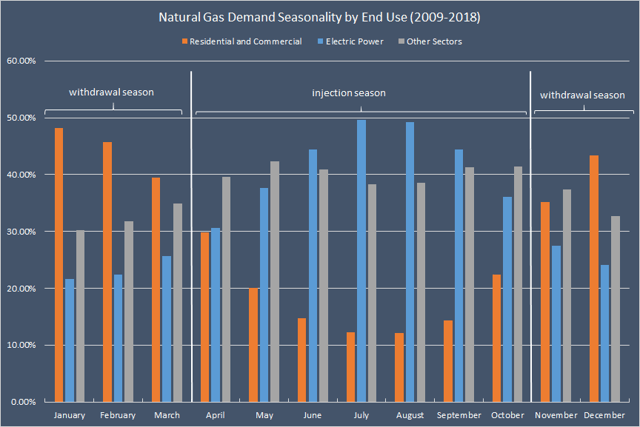 The latest data indicates that the weight of the Electric Power sector in the natural gas market continues to grow. The EIA's latest Electric Power Monthly Report shows that, in September, the share of total electricity supplied by natural gas-fired power plants has increased by more than two percentage points y-o-y (from 39.79% to 41.95% - see the chart below). It was the largest share of natural gas-fired generation ever recorded in the month of September. At the same time, the share of coal-fired generation has dropped by more than three percentage points over the same period to 23.91%. 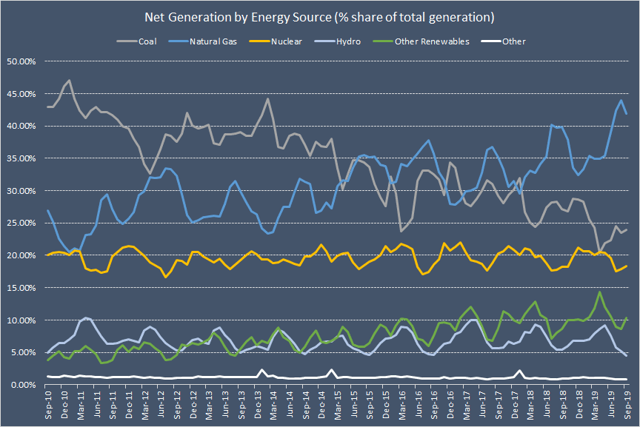 These latest trends are important for several reasons. Firstly, the share of natural gas usage for electricity generation increased even as the total electric output went up. According to Edison Electric Institute, United States produced 359 TW/h of power in September 2019, some 0.9% more than a year ago. Secondly, natural gas remained the fastest-growing source of power among all other sources (not just compared to coal). The share of renewables (hydro, wind and solar) has also increased in annual terms, but to a much lesser extent. 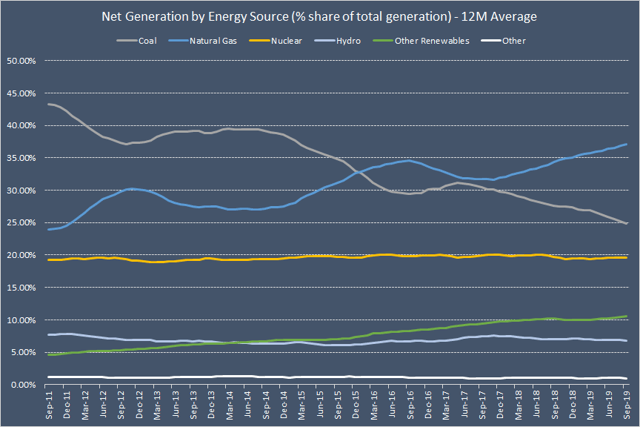 Still, coal remains the second most important source of electricity of generation in the United States, followed by nuclear power, other renewables (wind and solar) and hydro. Therefore, coal-to-gas switching continue to be an important factor in our natural gas consumption models.

Given that the price of natural gas has dropped by more than 10% m-o-m, while the average price of coal dropped by only 5% (over the same period), NG/Coal spread has declined, meaning that natural gas became more competitive (vs. coal) as a "feedstock" for electricity generation. 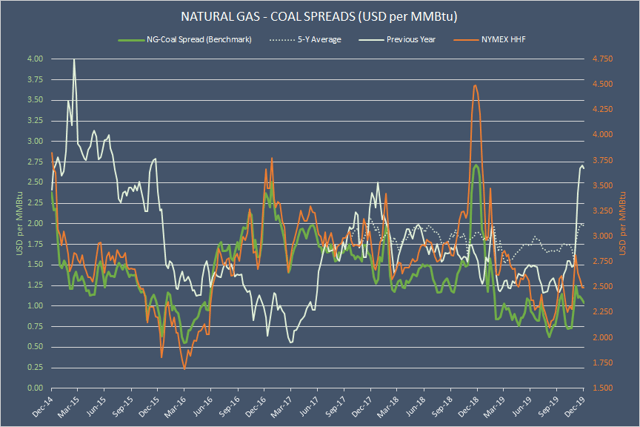 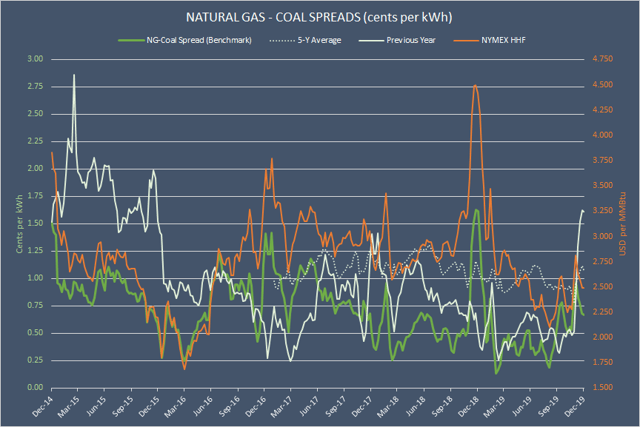 As of today, coal-to-gas switching trend remains strong (in absolute terms), with lower natural gas prices and lower NG/Coal spreads having an additional positive impact. We estimate that coal-to-gas-switching currently stands at around 5.9 bcf/d, some 0.7 bcf/d above the five-year average and as much as 2.7 bcf/d above last year's level (see the charts below). 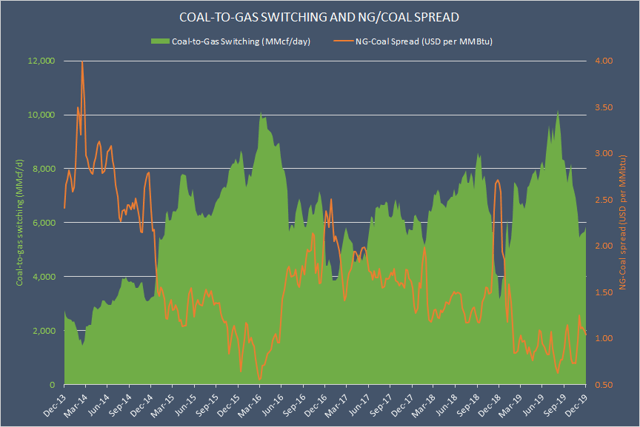 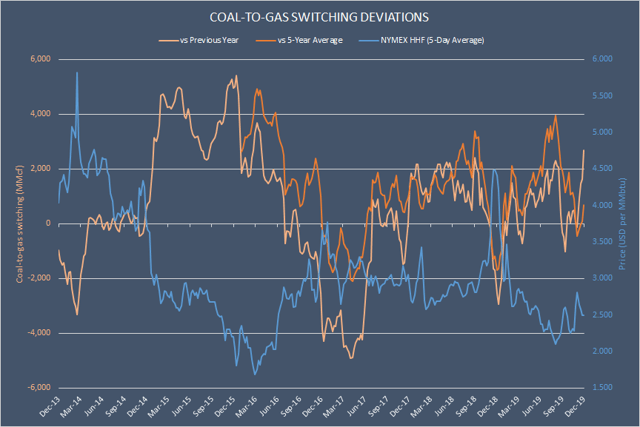 The total stock of natural gas-fired power plants is expected to increase by 1.14% y-o-y in December to 465.1 GW of net summer capacity, which will amount to 43.10% of total operating generation capacity in the United States. Conversely, due to the ongoing retirements of old and ineffective generators, the total stock of coal-fired power plants will fall to 226.6 GW (-6.2% y-o-y), just 21.0% of total capacity - see the chart below. However, the positive effect on gas usage in the Electric Power sector will be partly offset by the rising share of renewables. Indeed, wind and solar capacity are expected to grow by 11.27% and 15.35% y-o-y, respectively. Therefore, total annualized net effect* from the changes in generation capacity additions in December this year is estimated to be negative at around -2,905 MW of net gas-fired capacity. 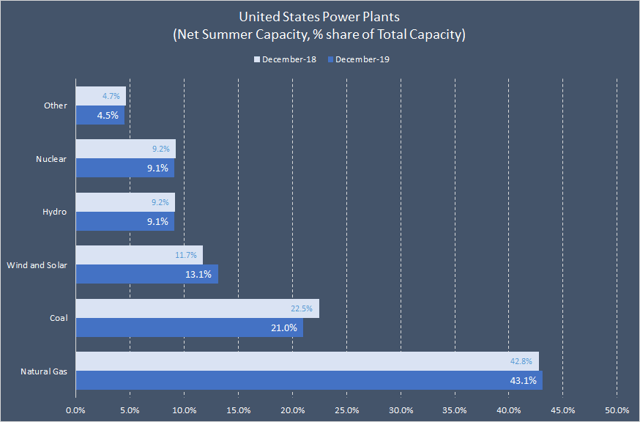 Notice how fast the share of "other renewables" (wind and solar) is growing. Together, they have already overtaken hydro and nuclear power. Previously, in an attempt to estimate the levels of potential natural gas consumption in the electric power sector, analysts would look at the schedule of nuclear outages to try to figure out how many nuclear megawatts will be replaced by natural gas. They would also study the level of snowpack to estimate hydro inflows and eliminate it from total calculations.

Now, however, analysts must also study wind speeds and the levels of solar radiation since the influence of "other renewables" can no longer be ignored. In this regard, please note that out of 12 calendar months, December has historically been a relatively "strong" month for renewable power (see full ranking in the chart below). At this point in time, we estimate that in December this year, wind, hydro, and solar generation will displace no less than 5.0 bcf/d of potential natural gas consumption in the Electric Power sector. 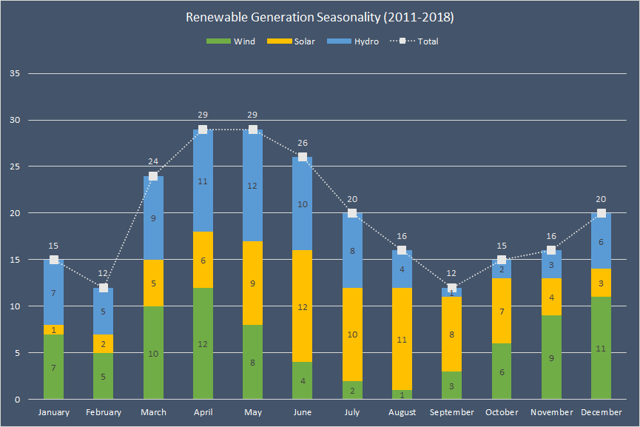 It is important to understand the key features of electricity generation from renewable sources. One of the most important features is natural seasonality. Renewable energy (in our case, wind solar and hydro) is derived from natural processes, which cannot be controlled by humans (for example, sunlight and wind). Perhaps, only hydro generation can be partially controlled, but it is also heavily influenced by precipitation and melting snowpack in the Pacific Northwest. In the chart above, we have ranked 12 calendar months in terms of their ability to provide "natural fuels" for renewable electricity generation. The ranking is based on an annual percentile basis and ranges from 1 to 12 for every type of renewable energy. 1 - weakest; 12 - strongest.

On balance, however, when we factor in other market variables such as production, imports, exports, and weather-induced consumption by other users, we estimate that total natural gas supply-demand balance in December will be tighter than last year by around -6.7 bcf/day. In absolute terms, this is a bullish development. The annual change in total balance is negative, meaning that annual storage "surplus" is likely to shrink in December. 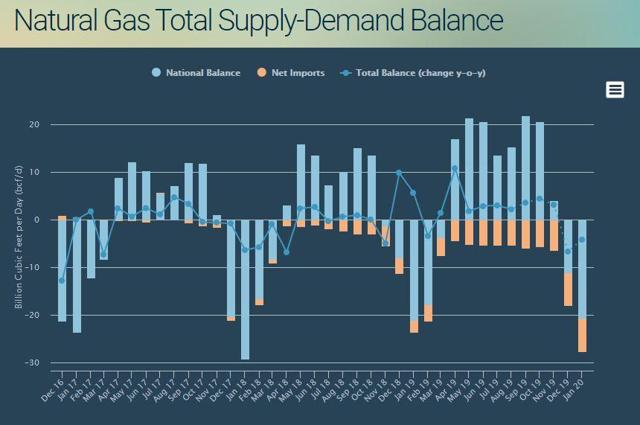