This article was selected to be shared with PRO+ subscribers - find out more here.

Superior Industries International (NYSE:SUP) is one of the largest vehicle wheel manufacturers in the world. It supplies OEM wheels to just about every major auto manufacturer and it also offers aftermarket wheels under well-known brands such as Rial, Alutec, Anzio and ATS. This company is based in the United States, but also has significant operations and sales in Europe and other parts of the world. This stock was trading for about $20 per share in 2018, but has been hit hard due to what appears to be integration pains from the acquisition of Uniwheels in 2017.

Uniwheels was based in Germany and this acquisition added significant revenues for Superior Industries. However, the expense reductions and other synergies appear to have been slow to arrive, until perhaps quite recently. This stock now trades for just about $3 per share and the company has a history of making solid profits. Based on this and a number of other factors, investors who buy now might be poised for significant gains as a potential turnaround takes hold. Recent financial results show promise and so does a newly created uptrend in the share price. With this in mind, let's take a closer look: 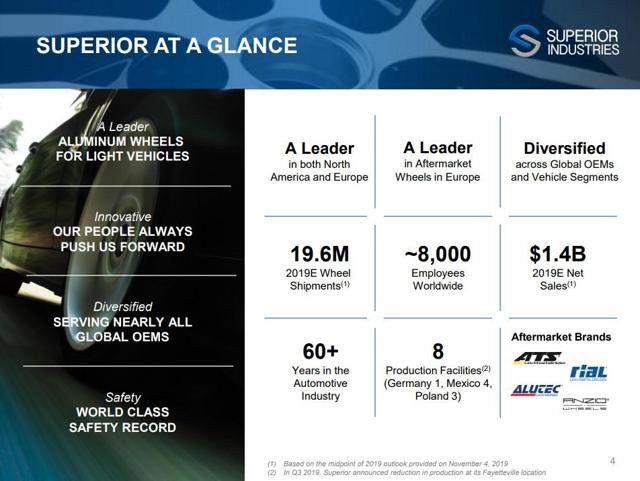 As shown above, Superior Industries is a top wheel producer in North America and in Europe for aftermarket wheels. The company has been in business for over 60 years. Also from the investor presentation, we can see below that the company is supplying the world's automakers. 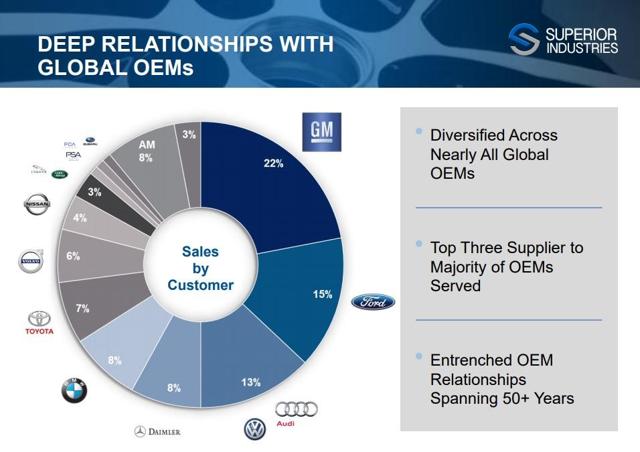 What Brought The Stock Down

I believe the integration of the Uniwheels acquisition has clearly taken longer than management had previously expected. The operating efficiencies/synergies and cost savings also appear to have taken time. The company also eliminated the dividend in September, 2019, in order to allocate more capital towards business investment and debt reduction. The elimination of the dividend is saving the company about $11 million per year.

In addition to the dividend being eliminated, other factors have put pressure on this stock in 2019, and these include the trade war with China, concerns about a potential recession, and the General Motors (GM) auto strike which recently came to an end.

The trade war with China and recession fears remain as potential downside risks, however, if the trade war is resolved this could become a major upside catalyst. Furthermore, with the Federal Reserve lowering rates recently, the chances of a recession appear to be limited for the foreseeable future. Lower interest rates should also boost auto sales in the coming months. These macro issues do not concern me too much; that leaves the main potential downside risk as being management execution.

If management is not able to improve profit margins and return this company to the profits it has historically generated, then the stock could decline and the roughly $644 million in debt it has will become a concern. What currently mitigates these potential risks is that Superior Industries has recently posted improved financial results. It also has significant liquidity with over $250 million in cash and credit lines available, and it has positive cash flow.

This Company Has A History Of Profitability

The financial results below (rounded up or down) represent the revenues and diluted earnings for Superior Industries. It shows that this company has historically been profitable except for the loss it posted in 2017, much of which was due to acquisition expenses. The financial data below is from page 22 of Superior Industries 10-K for 2018. Also of note in the 10-K is that the company owns all of it manufacturing facilities in North America and that shareholders' equity (book value) was $14.92 on a per share basis.

Recession fears that were sparked by a Federal Reserve that was tightening at this time last year have faded due to recent interest rate cuts and continued growth in the United States, along with improvements in Europe's economy. Many investors and analysts believe that a "phase one" trade deal is coming by the end of this year. If that is the case, global growth is likely to spark up along with increased business and consumer confidence.

As the chart below shows, light vehicle sales are projected to continue not only at the record levels that have been seen for the past few years, but also even show some growth. This is a strong and stable business environment for Superior Industries to execute margin expansion and revenue growth. 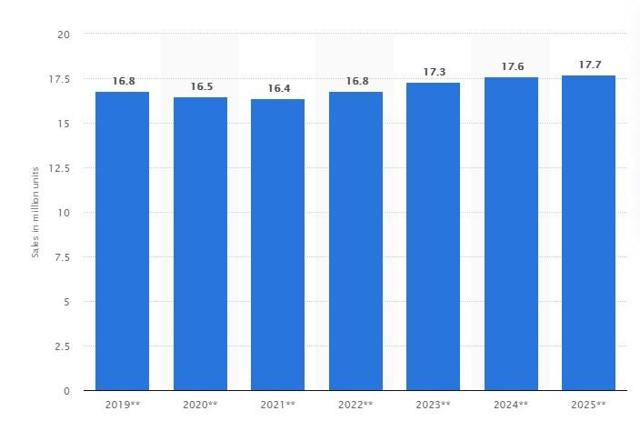 For the third quarter of 2019, Superior Industries reported revenues of $352 million, which beat consensus estimates of $336 million. The company posted an adjusted quarterly loss of just 8 cents per share. Sales in Europe came in stronger than expected and these nearly break-even results were excellent, especially considering that the GM strike lasted for about 40 days during the quarter. These results shows that management efforts to improve profit margins are working.

The earnings call for Q3 detailed a number of positives which include an expectation for increased cash flow in 2019, to come in between the range of $135 to $155 million. The company has also been making progress by repurchasing its unsecured notes and reducing debt. In addition, the company confirmed it has available liquidity of more than $250 million. Here are some of the highlights from the call:

"Before I get into the detail, I would like to emphasize the positive momentum we've seen in the organization on cash flow versus our internal expectations. As Majdi mentioned, since the third quarter of last year, we have seen a dramatic improvement in net debt, which is favorable by $113.6 million supported by a focus on cash by the entire organization. Our concentration is now on sustaining and enhancing these improvements.

The repurchase of our senior unsecured notes and other debt payments resulted in a total reduction of $12.4 million in debt principal during the quarter. Currently we have available liquidity of more than $250 million, which includes cash and availability under our revolving credit facilities and no near-term maturities of our funded debt. We also have an incremental availability under our accounts receivable factoring program. As of the end of the third quarter, our net leverage was approximately 3.3x, down nearly half a turn from the prior-year period."

Multiple Insiders Have Bought Shares In 2019, And Own A Solid Stake In The Company

On August 12, 2019, Ellen B. Richstone bought 18,000 shares at $2.84 per share for a transaction valued at about $51,000. In addition, there was also even more insider buying earlier this year when the stock was trading for about $4 per share. Furthermore, insiders own over 8% of the company so management interests are aligned with common shareholders.

A Lack Of Short Interest Could Be A Very Bullish Sign

According to Shortsqueeze.com, only about 644,800 shares are currently short, and this represents a 23% decrease from 832,900 shares in the prior period. Based on the average daily volume, the current short interest only represents about 1.4 days worth of average trading volume. This shows a major lack of interest by short sellers and that could be a sign that shorts do not see downside potential at these levels. The recent 23% decrease in short interest could also indicate that shorts believe this stock has hit bottom and that it has upside potential.

Chart Shows The Start Of A New Uptrend

As the chart below shows, this stock was trading for about $7 per share in March, and appears to have bottomed out in August. Since August this stock has been trending higher. It has been making higher highs and higher lows, and it even popped up to about nearly $4 per share in September due to the recent financial results that show a potential turnaround is at hand. I would not be surprised to see this stock make another run to at least $4 per share in late December or early January as tax loss selling comes to an end.

There are a number of potential upside catalysts which include the recent end to the GM strike, a trade deal with China, the end of tax-loss selling, and continued improvements in the financial results. With about $1.44 billion in annual revenues, that represents approximately $57.48 in revenues on a per share basis. That shows tremendous upside potential, if profit margins improve. There are only about 25 million shares outstanding, so if this company were able to bring just 2% of its annual revenues to the bottom line, it would post over $1 per share in earnings. That could be enough to double or triple the value of this stock.

In August, analysts at Barrington Research set an outperform rating and a $7 price target on the stock. Overall there are four analysts covering this stock with a consensus overweight rating and a $7.33 price target. These are typically 12 month price targets and this also seems conservative as this stock was trading for more than $7 per share as recently as February. Longer-term, I think somewhere between $10 to $15 per share is reasonable, but it will depend on management's ability to restore historical profit margins as well as on continued stability in the global economy.

If you want updates on these stocks in the future or other deep value and contrarian investing ideas, please consider following me. I have recently started posting updates on my Seeking Alpha Blog and by following me, you will have a chance to get these updates on stocks and investing strategies

Data is sourced from Yahoo Finance. No guarantees or representations are made. Hawkinvest is not a registered investment advisor and does not provide specific investment advice. The information is for informational purposes only. You should always consult a financial advisor.

Hawkinvest
10.3K Followers
Long-time stock market investor focused on strategic buying opportunities with dividend and value stocks. This investment strategy has resulted in a near 5 star rating on Tipranks.com and over 9,000 followers on Seeking Alpha. Follow me on Twitter for my latest trading ideas: @Hawkinvest1
Follow

Disclosure: I am/we are long SUP. I wrote this article myself, and it expresses my own opinions. I am not receiving compensation for it (other than from Seeking Alpha). I have no business relationship with any company whose stock is mentioned in this article.

33 Comments
To ensure this doesn’t happen in the future, please enable Javascript and cookies in your browser.
Is this happening to you frequently? Please report it on our feedback forum.
If you have an ad-blocker enabled you may be blocked from proceeding. Please disable your ad-blocker and refresh.