It does not take a rocket scientist to realize that it will take a consistent, cold snowy winter to get natural gas (UNG) prices out of the doldrums. US shale production continues to soar, natural gas stocks were replenished by a relatively warm winter last year, a weak Gulf hurricane season and a temperate fall.

This time of the year, we typically see draws into storage from cold weather. However, with the generally warm weather being experienced in the Midwest and East, there will be no panic by commercials and hedgers about a squeeze in natural gas supplies. Hence, the odds of natural gas prices getting anywhere close to $3.00 again this winter is unlikely.

So, what is driving the expected warm weather, which I anticipate well into December and possibly longer. For one thing, many firms have been talking about a cold early winter due to low solar activity and an El Nino neutral phenomenon. However, I am of the strong opinion that CO2, melting sea ice is more important than all of this talk about "near record low solar activity coming up." Here is an interesting article here about record Co2 levels. 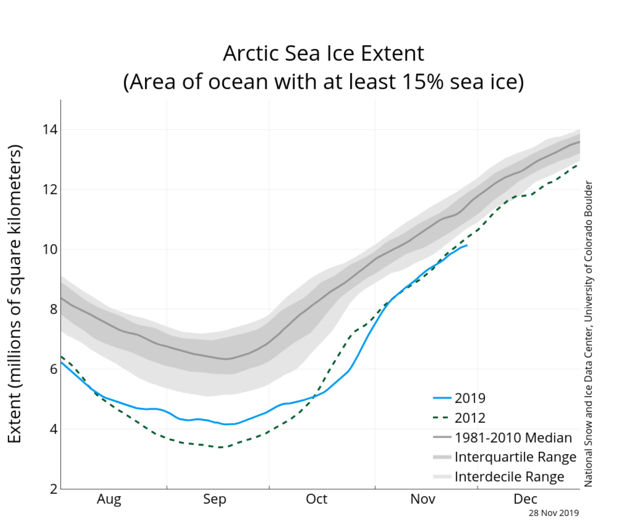 You can see above how sea ice is below last year and well below the 30-year average. The Arctic Oscillation index will be positive the next couple weeks, helping to prevent any consistent cold US weather. The polar vortex could strengthen over the North Pole in the coming weeks. So, this could enhance sea ice later and result in a colder second half of winter.

I am a firm believer of not looking at teleconnections to out-forecast standard computer models. For example, contrary to popular belief, we presently have weak El Nino conditions in the western Pacific. We also have something called a positive Indian Dipole (cool waters over Indonesia and warm east of Africa).

The positive Indian Dipole is resulting in droughts over Indonesia and also will have global implications on the weather for coffee (JO) and cocoa (NIB) in the weeks ahead. 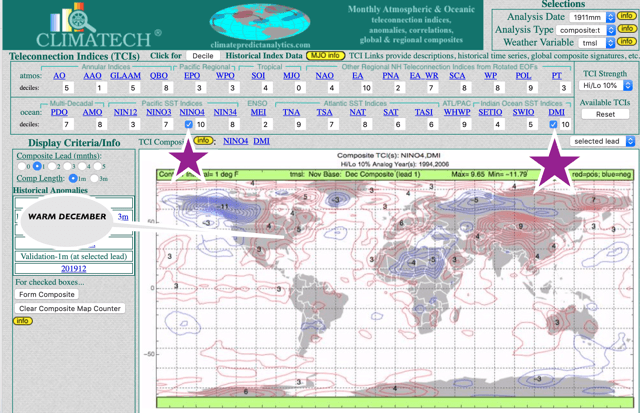 My in house long range weather forecast program (above) shows how December will likely be warmer than normal in the US, based on teleconnections. The stars represent Nino4 (warm western Pacific, which created back to back droughts in Australia) and a positive DMI (Indian Dipole), at least partly responsible for the warm early US winter.

This forecast put out by my model a week ago has meant that the triple inverse natural gas ETF (UGAZ) is up 30% this week because of the warm outlooks coming up. Standard computer models and most meteorologists missed the boat with respect to what many felt would be a cold, early winter outlook.

So, what is next for natural gas? While prices are extremely cheap, I see no reason from a weather standpoint to take a long position in this market for now. However, come the second half of winter, natural gas may be a golden buying opportunity, if for anything else, from too big of a short position in natural gas and a cold late winter.

Even in the natural gas equity sector, there are few shining lights. Recently, shares of stocks such as Gulfport Energy (GPOR) have collapsed more than 70% as has Chesapeake Energy (CHK). Chesapeake Energy, which helped propel the shale gas revolution in the late 2000s with leading positions in the Marcellus, Barnett, and Haynesville shale basins, is now facing bankruptcy, as they are sitting on US$9.7 billion in total debt.

James Roemer
1.75K Followers
Jim Roemer owns the site (www.bestweatherinc.com) offering FREE and SUBSCRIPTION BASED weather-related blogs for commodity traders and farmers. He also is co-founder of CLIMATE PREDICT, the most detailed and accurate long-range global weather forecast tool. He was one of the first meteorologists ever to become an NFA registered Commodity Trading Advisor and has worked with major hedge funds, Midwest farmers and traders for over 30 years. His unique ability to forecast both short and longer range weather trends, with a special emphasis on interpreting market psychology and major market moves in grains, softs, and the energy markets, has made him a global industry leader in the commodity risk management industry.