I last wrote on ABN AMRO (OTCPK:ABNRY) in late September just after the announcement that the company was under investigation by Dutch prosecutors for potential breaches of anti-money laundering and terrorist financing laws. I noted that the potential for a large fine underscored the risks to the ABN dividend story that I had examined in a previous article ("ABN AMRO - 8% Yield Is A Warning Signal, Not A Buying Signal").

Staying away from the shares has been the right call and they have fallen a further 3% since September over a period where neighbor ING (NYSE: ING) is up 8% and many European banking stocks have rallied 10-15%.

Unfortunately, I continue to see more reasons to avoid ABN than to dive in to try to buy the dip.

Money laundering case could drag on for months

The money laundering case is clearly the biggest overhang for the share price. On the 3Q earnings call, management provided very few clues on how long it will take to get clarity on this case, but the experience with other banks suggests we are probably talking months at least. The company has warned that:

"[The] investigation may result in sanctions, such as a fine, which could be material." (3Q19 earnings presentation)

It has also reiterated it has not booked any provisions for the case, the 3Q earnings report containing the same wording as in 2Q:

"We have not made a provision for a possible fine as the amount cannot be estimated at this time." (3Q19 interim report notes the accounts)

Consequently, any fine will flow straight to the P&L and possibly put a material dent into the capital base.

In theory, a large fine is in the price. The share price is ~€2 lower than before the investigation was unveiled in September, which implies the size of the fine the market thinks possible is in the region of €2bn. This is on the high side relative to the €775m ING was fined last year in a similar case. However, ING had also been previously fined $619m in 2012 by US authorities for related transgressions, so it is possible the market is trying to price in the additional cost of potential US penalties for ABN, albeit there is no mention of a US angle so far.

However, the problem is the uncertainty and the impact it is having on EPS and DPS estimates for 2020, which I discuss later.

Political pressures are evident elsewhere too

ABN's 56% ownership by the Dutch government has always been a factor in my negative view on the stock since we have seen time and again with other banks that no matter how much a government professes to be simply an investor like any other, the reality is they can't help interfering, usually in ways that are detrimental to other shareholders.

The money laundering case may have happened with or without government ownership. But there is no doubt that other recent decisions reflect direct political interference.

The most serious was the announcement in the 3Q results that ABN won't pass through negative interest rates to deposit-holders up to €100,000 (discussed in the 3Q earnings report). This is a high threshold and it is clearly the result of political pressure to shield retail clients from the effects of ultra-low interest rates. It follows comments from the Dutch finance minister Wopke Hoekstra in September that he would talk to the banks about the consequences of negative interest rates, even if he resisted calls for an outright ban on smaller deposits (Reuters article here).

ABN has said the commitment means that around 95% of clients, representing approximately 40% of the deposit base, will be safeguarded from negative rates.

The timing seems very odd since there is clearly growing pressure on ABN's net interest margin from negative Euro rates. Management reiterated previous guidance in 3Q that the changed interest rate outlook was likely to result in at least €20m lower net interest income per quarter, representing a c.3% headwind to profits vs. 2018 levels.

The impact comes from ABN's €185bn swap portfolio that it uses to hedge the interest rate risk on its deposits. The average maturity of the portfolio is 3 years. Looking at Euro swap curves, 3-year rates are now negative, having been positive at the time ABN set many of its financial targets in November last year. The drag from lower reinvestment returns on the swaps book is the main origin of net interest income pressure. 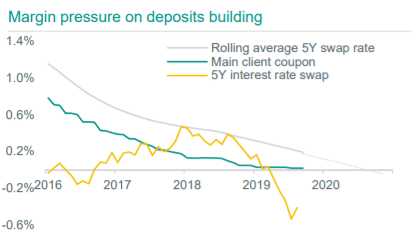 Not having the flexibility to pass more of this pressure on to deposit holders increases the NIM risk going forward.

Separate to this case, but also on the subject of ABN's relationship with politicians and regulators, it is worth noting that over the last couple of months, the company has also been in trouble with the Dutch authorities for a "serious and grave" breach of Dutch market transparency rules (Reuters article) and it has had its offices in Frankfurt raided by German police in connection with a long-running investigation into dividend stripping (Reuters).

The combined impact of uncertainties around the money laundering case along with worries about the outlook for NIM and future revenues is starting to have a big impact on Street estimates for 2020.

Of even more concern is big cuts to dividend expectations, where Street estimates for 2020 are 10% lower and 7% lower for 2019.

I've noted in previous articles that the dividend has become the dominating factor for ABN. Until very recently, the company was regarded as having a substantial pot of surplus capital that it could to return to shareholders. However, as time has gone by, it has become glaringly obvious that this surplus capital is more illusory than real. Not only is the company much more exposed than other banks to forthcoming changes to the capital rules but the uncertainties around the cost of the money laundering case are now also feeding into the equation. And with an interventionist government making its presence felt, it now seems inconceivable ABN will be able to deliver the big payouts that were once expected.

Street earnings and dividend estimates have been cut sharply

Dividend estimates could have further to fall

Sadly, we may not yet have reached the bottom in terms of 2020 estimates. Precision regarding the money laundering outcome is obviously difficult at this point, but we can run capital and dividend sensitivities using ING's €775m fine, which still seems as reasonable a guesstimate as any.

CET1 was 18.2% in 3Q, a number that excludes accrued profits for the first nine months and also makes no accrual for the 2019 dividend. If we add FY19 consensus net profit and deduct consensus FY19 dividend (€1.42 p.s.), as well as a €775m fine, then pro-forma year-end 2019 CET1 is 18.1%, hardly a disaster and a level the company could probably still feel reasonably comfortable with.

However, management's CET1 target range is 17.5-18.5%. If we reach the end of the year and the case is still unresolved and we have a quantifiable liability hanging over the company, it is entirely possible management will conclude the prudent option is to hold some capital in reserve and set the dividend at a level that keeps CET1 at the higher end of its target range. 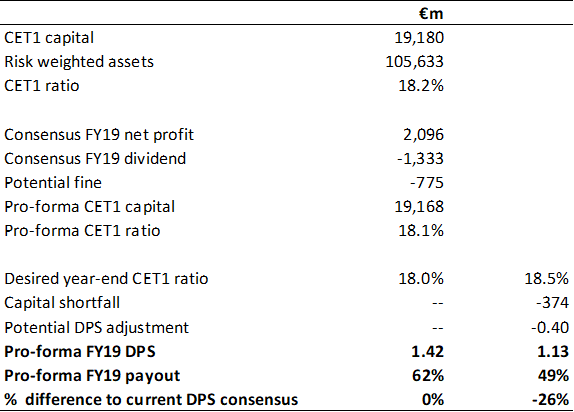 Source: Author's calculations based on company data and company-compiled consensus

Conclusions - not cheap enough yet to dive in

However, neither is it screamingly cheap. For 0.73x P/TNAV, you could buy BNP Paribas (OTCQX:BNPQF, OTCQX:BNPQY), which has a similar ROTE profile but much less interest rate risk and no money laundering case. You could also buy ING for not much more (0.79x) if you're looking for exposure to the profitable Dutch mortgage market.

The 9% yield is ABN's key selling point, but as I've remarked before, I see this more as a warning signal than a buying signal. With DPS estimates for 2019 and 2020 in sharp decline, 9% may well not be the yield that is actually delivered.

The money laundering case and political interference mean the surplus capital argument for ABN is now truly dead and buried and I'm struggling to see a swift recovery in the share price unless and until there is a really compelling valuation case. We haven't reached that point yet.

Disclosure: I am/we are long BNPQF. I wrote this article myself, and it expresses my own opinions. I am not receiving compensation for it (other than from Seeking Alpha). I have no business relationship with any company whose stock is mentioned in this article.