The Tekla Healthcare Opportunities Fund (NYSE:THQ) has been one of my go-to funds for exposure to the healthcare sector. This actively managed fund has been able to give an investor exposure to some of the largest and bluest names the healthcare sector has to offer. All this, while providing an attractive and sustainable distribution. The current distribution rate sits at 7.34%. THQ also is still offering an attractive entry valuation, even as the sector as a whole received some welcome news from the current White House administration.

President Trump had announced two new potential regulations on the industry about transparency in pricing. The "Transparency in Coverage" rule would be where the word "potential" comes in. There could be several changes and modifications to the ruling when it is finalized. This regulation would put power into the hands of the consumer in a way that discloses prices to make an informed decision. We get pricing on all of our other goods and services, healthcare should be the same. This should open up competition amongst all the players in the healthcare industry.

The rule that is being finalized starting in 2021 also helps add transparency. It requires that hospitals standardize information to consumers. This will allow the consumer to make an informed decision about where they choose to receive procedures. Additionally, hospitals will be required to make public negotiated prices for "300 common shoppable services in a manner that is consumer-friendly and update the information at least annually."

This is welcome news both for consumers and the healthcare industry alike. This is positive because consumers can make better-informed decisions and have access to pricing information that was open and clear before. This is also a win for the healthcare industry on two fronts; the fact that the regulation didn't go as far as some participants were expecting and greater clarity going forward. Of course, the caveat here is that next year is an election year and could see the White House with a shake-up. Although, even there, Elizabeth Warren has toned down the rhetoric - also helping to push the healthcare sector higher. The main relief from that campaign was her announcing a delay of three years for her "Medicare for All" plan.

Regardless of what happens, 2020 should be an interesting year for healthcare, in general. We are likely to see funds like THQ become quite volatile. Almost like we see with the broader market reactions to the weekly U.S.-China Trade War negotiations.

I believe THQ fits into the whole thing as a mostly large-cap-oriented CEF. Healthcare is usually quite a defensive sector as consumers don't typically forgo procedures they need to live a healthy life. The products offered by THQ's largest holdings are everyday items that consumers have in their homes, without even thinking about it.

THQ is currently trading at $18.40 per share, with a NAV per share of $20.36. This gives the fund an attractive discount of 9.63%. The one-year average discount sits slightly tighter at 9.18%. This does give THQ a negative z-score of -0.44, indicating that the fund is slightly undervalued relative to its history. Of course, THQ has enjoyed large discounts for most of its life and could perpetually. That isn't a bad thing; receiving exposure to large-cap healthcare companies on sale is actually great. 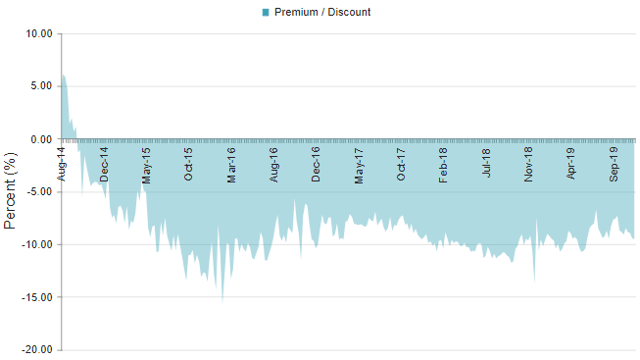 I would have actually anticipated this discount to narrow by a bit over the last couple of months as we received the previously mentioned announcements of clarity. Typically, a CEF will overshoot both ways - to the downside and the upside. In this case, we are still receiving an attractive entry price for THQ.

The fund has been lagging the broader market on a YTD basis, as benchmarked against the S&P 500 SPDR ETF (SPY). Total NAV return for THQ sits at 14.11%, while the total market return sits at 14.38%. This can be compared for illustrative purposes against SPY, coming in at a whopping 27.13% YTD return! Of course, THQ isn't competing with SPY. The more appropriate benchmark for the fund would be the Health Care Select Sector SPDR ETF (XLV). In that regard, the performance has been a bit more comparable, although still lagging. XLV coming in at a YTD return of 16.40%. The difference here is that you can't collect a 7% plus monthly income from XLV when you can with THQ.

The distribution rate for the fund comes in at 7.34%, with a NAV distribution rate of 6.63%. This is important to note as the fund has to only earn the NAV distribution yield and then investors can collect the market rate. The added benefits of buying a CEF at a steep discount. Another positive for THQ is that the fund has maintained the same monthly distribution payout of $0.1125 since its inception. This shouldn't be the only deciding factor in acquiring shares of a CEF, but it doesn't hurt either.

The latest report available from the fund is its Semi-Annual Report, for the period ending March 31st, 2019. We are a few weeks away from when its Annual Report should be published. We can still take a look at the metrics in the report of interest and make some assumptions. 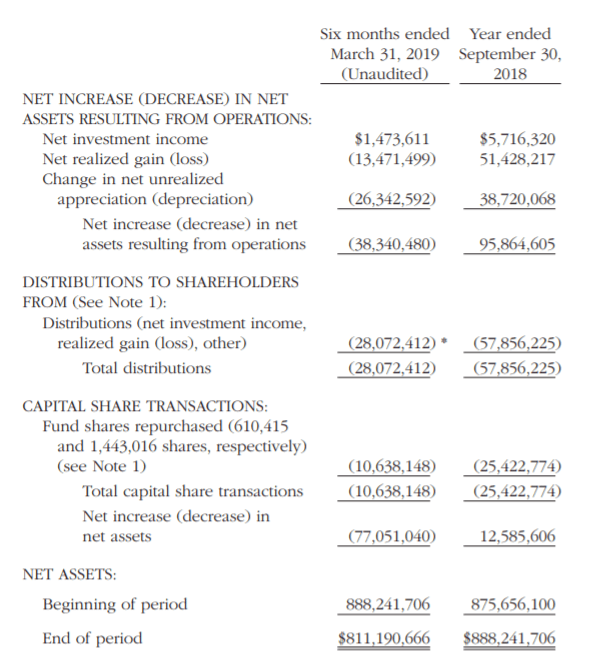 What this portion of the report tells us is that THQ is generating very little NII. NII is a result of what the common shareholders gain after expenses are taken out of the fund's dividends and interest. THQ has an expense ratio of 1.49%. When adding in the expense of the use of leverage, we arrive at a total expense ratio of 2.40%.

So, with very little NII in the fund, we will have to rely on capital appreciation to continue to fund the distribution. Of which, as of the last reporting was an unrealized capital depreciation and not appreciation. The fund had depreciation of $2,491,200 in its portfolio. This is likely why the fund was estimating a large portion of ROC for the year.

However, net assets sat at $811,190,666 ending March 31st of this year. This has now climbed to $843,236,010. Again, thanks to the regulation and potential regulation announcements made prior. This would indicate that the fund won't be paying out destructive ROC if the portfolio remained static until the end of the year. They could, however, realize losses on the underlying portfolio and still attribute the tax status as ROC. Although, it hasn't classified any official reporting of the tax classification for the past two years. 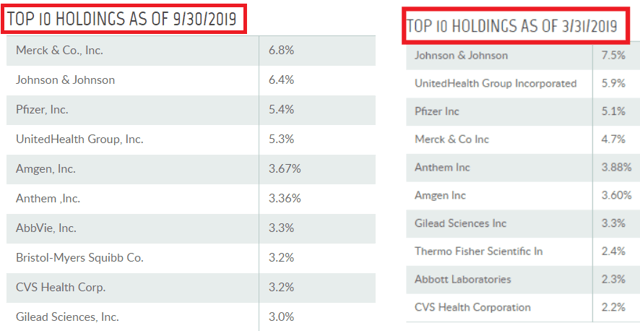 Since last covering the fund, the portfolio has shifted very little. Johnson & Johnson (JNJ) is still a top holding, along with UnitedHealth Group Incorporated (UNH), Pfizer Inc. (PFE) and Merck & Co. Inc. (MRK) among a few others. The two new holdings appearing in the top 10 list are Thermo Fisher Scientific Inc. (TMO) and Abbott Laboratories (ABT).

TMO operates in the "life sciences tools and services" category of healthcare. This means it offers solutions and products to other healthcare-related companies. The company does pay out dividends, but currently shows a dividend yield of 0.24%. It also doesn't have a long history of raising the dividend, only increasing it for the previous two-year period.

This isn't necessarily a bad thing, remember, THQ can payout based on capital appreciation of the underlying portfolio as well, and the fund has been able to produce very attractive returns. This is also consistent with the "life sciences" industry that it operates in. That's because these biotech companies are funding R&D more than they are concentrating on cash flow. This is where another Tekla fund we had covered recently, Tekla Healthcare Investors Fund (HQH), has significant exposure to these growth names.

The other company popping into THQ's top 10 is ABT. This is a company more in line with THQ's old-stable-large-cap centric holdings. ABT has 46 years of increasing dividends. This is in contrast to growth-focused biotech names that typically don't even pay dividends.

You may have noticed the dip in dividends in 2013. This was a result of a spin-off and not a cut. In this case, AbbVie (ABBV) was spun off from ABT. ABBV was a top holding of THQ, which as of June 30th, 2019, was still listed as a holding.

As we discussed in the HQH publication, the biotech portion of the healthcare sector is likely to experience consolidation over the next few years. This is in an effort to find new growth opportunities and cut costs through synergies. This should bode well for THQ and HQH, and of course, HQH leans much more on its holdings in the biotech space. Whereas THQ primarily holds larger-cap stable companies that have been operating in this space for years.

THQ is still a great way to play the healthcare space. The discount is still at quite an attractive level of 9.63%. The fund pays a monthly distribution of $0.1125 that equates to a rate of 7.34%. This has been the same payout month after month since the fund's inception in 2014. The metrics for the distribution appear to be moving in a positive direction through 2019. This is primarily due to the announcements of a new ruling and a potential ruling.

The rulings are a win for both society and the healthcare industry as a whole. They provide transparency for the consumers and give us choices, while not crippling an industry with price regulations. While I believe this is positive, it remains to be seen what the 2020 election outcome has in store for us. This could significantly change the trajectory of moves in the healthcare space. I believe this is why a lid has been in place on this recent rally for the sector and we aren't higher.

Either way, I see THQ as attractive at these levels and a solid, long-term choice for my healthcare exposure needs!

Disclosure: I am/we are long THQ, HQH, ABBV, UNH. I wrote this article myself, and it expresses my own opinions. I am not receiving compensation for it (other than from Seeking Alpha). I have no business relationship with any company whose stock is mentioned in this article.