PDS Is Still On A Soft Ground 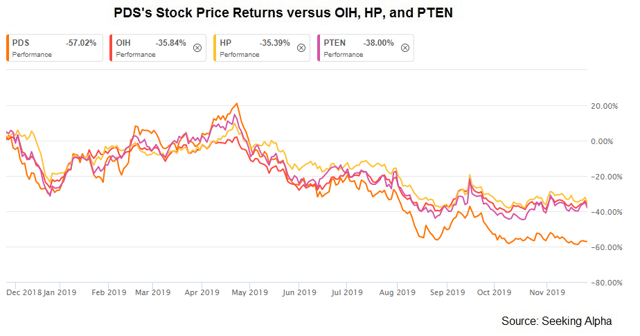 Precision Drilling Corporation (NYSE:PDS) provides oil and natural gas drilling and related services and products. I think the company’s increased free cash flow and lower debt level would help improve investors’ sentiment. Investors need to be patient before the stock price starts nudging up. The stock is relatively undervalued. I think it can produce positive returns over the medium-to-long term.

Precision Drilling has managed to keep its U.S. onshore drilling rig fleet steady and commercialize the automation technology. I expect the mix of higher-margin advanced rigs will protect the fall in operating margin despite the weakness in day rates in a competitive market. On top of that, there has been an improvement in the drilling activity in Canada in Q3. The company has also de-leveraged its balance sheet in 2019.

The company’s future revenue potential lies with the commercialization of the Process Automation Control (or PAC) platform. The upstream customers extensively require high fidelity data and relevant real-time insights. Currently, the company has more than 15 revenue-generating PD-Apps under development that can be commercialized. According to the company’s estimates, when system utilization is above 70%, the PAC-enabled rigs start delivering value to the customers. Currently, most of its PAC-enabled rigs are operating above 90% utilization. As a result of the automation, the operating cost has decreased while there has been a 25% to 35% performance improvement.

Investors may note that the softening up of E&P activity and lower upstream capex have forced upstream operators to focus more on drilling efficiency improvement. PDS, on its part, has all of its 68 super triple rigs configured for multi-pad drilling and longer laterals. Once the current headwinds are gone, it can improve the day rate. While the pricing pressure in the U.S. will continue for some time, the renewal rates look to firm up and are expected to remain in line with the Q3 rate. We also notice a relative tightness of supply of the super spec rigs, which will balance out the overall pricing softness.The company expects the integration of PAC with the Super Triple rig fleet will drive the market share gains, which will raise the company’s revenue and expand margin growth.

What Are Its Strategies in the U.S.? 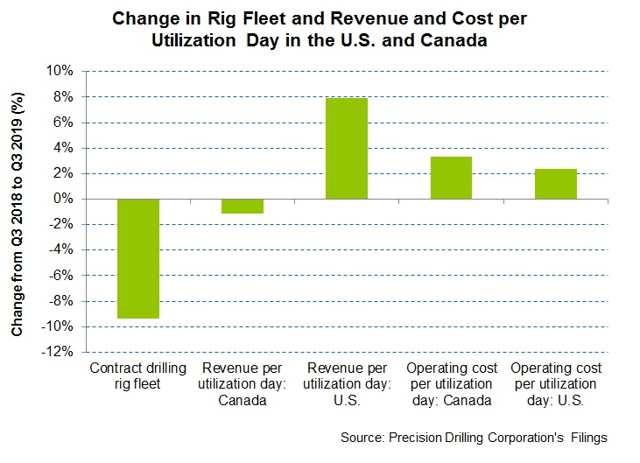 Let us check out what went right for the company’s U.S. operations in Q3. Apart from higher onshore drilling rigs, the company’s average revenue per utilization day increased by 8% year-over-year in Q3 2019, which helped increase per day operating margin by 19%.

Despite the lower day rate, Q3 witnessed some improvement in rates in the Precision ST 1500 rigs. However, pricing for ST 1200 rigs was below $20,000 per day range. Investors may note that the DJ Basin and the Marcellus Basin (51 rigs) are its primary operations in the U.S. In the SCOOP/STACK and the Bakken, the company has kept its activity to a minimum.

Here is how the strategies are evolving for PDS in the U.S. In response to the current crude oil price volatility, the E&P operators have been reducing the active rig count as capital constraints and cash preservation have taken priority. The U.S. rig count, in the past year, has dropped by ~25% until November 22. The West Texas Intermediate (or WTI) crude oil price has decreased by 19% in the past year until Q3-end. Against such a weak backdrop, the company's active rig count has been steady at the mid-’70s in the past year, which is quite remarkable. More importantly, the need for advanced rigs like the Super Specs has been increasing, and these rigs typically operate at a premium compared to the legacy rigs. Although the number of rigs under contract has gone down in the U.S., pricing on contract renewals has been steady. Some of the company’s customers are planning to smooth out drilling projects to drive efficiency by reducing stop/start costs. I think these initiatives will be amicably backed up by PDS’s Super Triple pad rigs and PAC automation technologies. 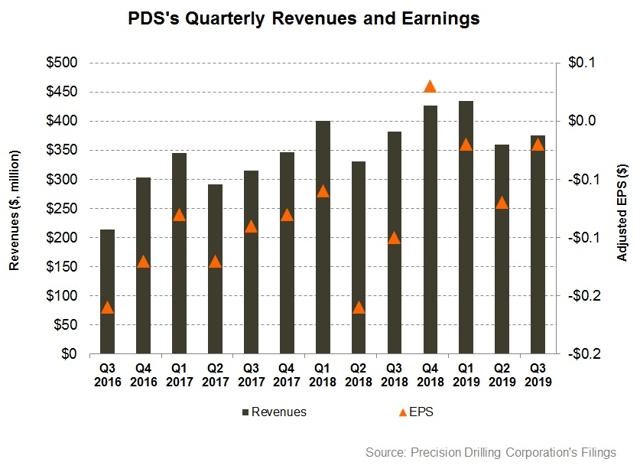 Despite several headwinds, PDS’s performance was quite resilient in Q3 2019. Its Contract Drilling Services segment revenues remained unchanged in Q3 2019 over a year ago, while the Completion and Production Services revenues decreased by 15% during the same period. The company’s adjusted earnings per share were a negative $0.02, which was deterioration compared to a loss of $0.1 per share a year ago. The company’s U.S drilling rigs decreased while day rates lowered in that region, which contributed to the earnings fall. 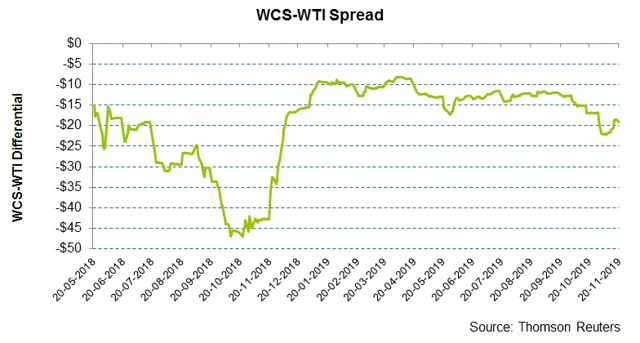 Moving on to Canada, there was a significant increase in rig count following the activity resumption after the spring break. For the past several years, the well-service business in Canada has had structural flaws, which resulted in severely low rates and utilization. Despite the rig count fall and the subsequent activity slowdown, PDS has a 30% market share. Plus, 22 of PDS’s 52 rigs in Canada are Super Triples directed towards NGL production. Demand was high primarily in the Montney and Deep Basins. So, Canada saw relatively steady average revenue per utilization day (1% drop) in the past year until Q3, although the operating cost per utilization day increased by 2.4% during this period.

The WCS (Western Canada Select)–WTI (West Texas Intermediate) spread is a key indicator of the Canadian energy companies’ performance. The differential came down significantly during the end of Q4 2018 and stayed low until Q3. However, since October, it has again gone south. Currently, it is trading at a ~$19 discount to the WTI. WCS, which tracks heavy oil from Canada, typically trades at a discount relative to WTI. The lower price reflects quality issues, as well as the cost of transport from Alberta to refineries in the U.S. On top of that, the Canadian government has ordered a production curtailment in January 2019, which has affected the energy services companies adversely. Since the spread deteriorated from Q3, it can affect the margin adversely in Q4.

In the first half of 2020, the company expects 2020 activity and pricing to remain in line with the Q3-level. However, pricing pressure can remain intense on the shallow rigs in the Viking, the Cardium, and the South Saskatchewan Bakken regions. Partially mitigating the headwinds will be the company’s operation of the higher-margin Super Triple rigs in the Montney. However, investors should note that the oilfield service industry remains challenged in Canada, and rig fleets do not have sufficient support for increased activity. Until the overall scenario changes, Canada will continue to weigh on PDS’s performance.

In Q3, the company added one active rig to its international rig fleet. PDS’s management expects to see increased bidding activity in Kuwait, Saudi Arabia, Kurdistan, and even Latin America in 2020.

In 9M 2019, PDS’s cash flow from operations (or CFO) increased by 7% over a year ago. Improvements in revenues and working capital primarily led to the cash flow rise. In 9M 2019, it spent $138 million in capex, which was a significant increase compared to a year ago. So, free cash flow was $75 million in 9M 2019.

The majority of the growth capex has already been spent on the rig upgrades in Kuwait, a U.S. newbuild rig early in the year, and the SCR AC ST-1500 rig conversions. In FY2020, the company expects $60 million-$80 million in capex, which would be a substantial decline over FY2019. With lower capex, I think the company can achieve a higher free cash flow in the next year. 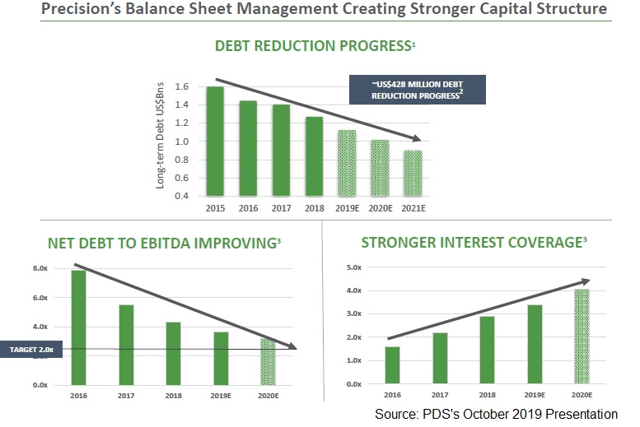 An essential tenet of PDS’s medium-term strategy is to lower debt through cash flow improvement. Towards this, it plans to meet or exceed the target of reducing debt by $200 million by the end of 2019. It has already retired $193 million of debt so far in 2019. In 2020, the company plans to reduce debt further by $100 million to $150 million. The majority of PDS’s debt repayment obligation falls in 2023 and 2024 (~$698 million) unless the company works out a refinancing schedule.

The company’s leverage (debt-to-equity ratio) of 0.97x is higher than some of its competitors. Paterson-UTI Energy’s (PTEN) and Helmerich & Payne’s (HP) leverage ratios are 0.33x and 0.12x, respectively. Nabors Industries’ (NBR) leverage (1.27x) is higher than the average. With the available liquidity (cash balance of $93 million and undrawn $531 million revolving credit facility), it does not require additional external financing to meet the medium-term financial obligations. However, it might want to increase free cash flow to avoid further strain on the balance sheet. 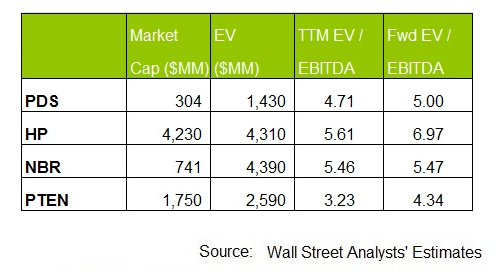 According to data provided by Seeking Alpha, 14 sell-side analysts rated PDS a “buy” in November (includes “very bullish”), while three recommended a “hold.” One of them rated it a “sell.” The consensus target price is $1.81, which at the current price, yields 74% returns.

What’s The Take On PDS?

Precision Drilling can continue to see a rather difficult period, although it has managed to do a few things right, including keeping a steady the U.S. onshore drilling rig fleet and commercializing the automation technology. The drilling market and the day rates in the U.S. remain competitive, but an increased mix of higher-margin advanced rigs will protect the fall in operating margin.

On top of that, there has been an improvement in the drilling activity in Canada in Q3. Nonetheless, the drilling environment in Canada still suffers from the flaws that have been developed over the years. The company has also de-leveraged its balance sheet in 2019. I think the company’s increased free cash flow and lower debt level would help improve investors’ sentiment as the upstream customers keep their E&P capex budget limited and the crude oil market stays volatile. For a beaten-down stock like PDS, investors need to be patient before the stock price budges. Over the medium-to-long term, only if the balance sheet cleans up and day rates continue to improve, the stock can produce positive returns.

We hope you have enjoyed this Free article from the Daily Drilling Report Marketplace service. If you have been thinking about subscribing after reading past articles, it may be time for you to act. The oilfield is at its low ebb, and now is the time to be looking for winners.

Good news for new subscribers! In November, we are offering a 10% discount off the annual subscription rate of $595.00

A 2-week free trial is applicable, so you risk nothing. Hope to see you in the DDR as we look for bargains in the oil patch!

Badsha Chowdhury
1.09K Followers
I have more than 10 years of experience in analyzing and writing on stocks. I write on both long and short sides in an unbiased manner. I have been covering the energy sectors in the past 5.5 years, with the primary focus on oilfield equipment services sector. I also cover the Industrial Supply industry. I am currently co-authoring with Seeking Alpha contributor Thomas Prescott.