Since we last wrote on LGI Homes (LJIH), the stock price has fallen about 15% from ~$83 per share to barely more than $70. Our tactical timing could definitely have been better; however, nothing has changed the growth trajectory and current levels represent an even better entry point. Earnings was solid and the outlook remains undimmed.

So why the slide?

Assigning causality is not always as clear cut as the talking heads on CNBC or Bloomberg might sometimes lead you to believe. Still, the search for truth is useful. The main reasons we can see was a combination of mortgage rates edging up (affecting all homebuilders), a conversion of debt to equity diluting shares on November 15 and probably also some profit taking after a strong run. LGIH's price has taken a clear step back, and it now clearly represents value. But we are getting ahead of ourselves, so firstly earnings...

All of these numbers were records for LGI Homes. LGI Homes also reported record average prices for homes as well as a record number of active communities. Still, overall Q3 earnings were very close to forecast, which isn’t unexpected as LGI Homes reports the number of homes closed each month, a week following month-end. Thus, neither a small beat on bottom-line or a small miss on revenue growth should see much market reaction.

During the earnings call, some points were raised:

#2 - What has changed since earnings?

A convertible note was swapped for cash and shares on November 15. This meant the issue of 2.5 million shares, thus raising the shares outstanding to 25.5 million shares. These numbers are estimates based on Q3 earnings call guidance. That’s an expansion in the share base of ~10.8% which is significant dilution, and is at least part of the explanation for the share price fall from $74 to $60 per share in November. In case you are thinking that dilution is a regular event, keep in mind that LGIH has done share buybacks at least twice previously including $50 million in 2018.

Since the earnings call on November 5, LGIH has announced 10 new communities in the following 2 weeks. This is a very brisk pace and a good sign before December, which is always, and by far, the biggest selling month of the year. Given LGIH doesn't announce when communities sell out and become inactive, this information can't help provide an accurate guide to total active communities, but a slew of new communities bodes well for Q4 sales and earnings.

Following our last post, a commenter claimed that LGI Homes is highly leveraged implying that it is a risky investment. We didn’t examine debt in our article, because we didn’t believe debt to be out of line. Still, examining debt levels is always part of the investing process, so where does LGI Homes stand?

At the end of Q3 2019, LGIH had $760 million in debt against assets of $1.6 billion. Are those assets solid? Of this number, LGIH had $830 million in land (comprised of 48,000 owned and controlled lots and finished lots), $371 million in homes under construction and $250 million in completed homes. Those are solid assets, not the mark-to-model virtual kind.

Those numbers are quite typical for an asset intensive builder.

Bottom-line: Debt levels are in the sweet spot

Property is a capital intensive industry, thus borrowing against this to grow is both necessary and understandable for a builder. If you take too little debt, then LGI Homes is underfunding growth. Yet excessive debt levels can cause excessive interest costs and risk, particularly in a downturn. Our judgment is that LGI Homes' debt levels are in the sweet spot, enough to fund steady growth but far from excessive. There remains plenty of liquidity and capacity (up to $245 million) to absorb bumps along the way as well as to purchase small local developers should the opportunity arise.

One of the things that is striking when you examine homebuilders of a similar size, based on number of homes built, is the wide variation in the financial metrics. LGI Homes' financial performance is better than most builders of a similar size and the company has set its sights on reaching the Top 5. So how does it compare against the best in the business for selected metrics?

Homebuilders aren't often given high flying earnings multiples and PE ratio for the group remains reasonable; however, LGIH stands out for being at the lower end, close to our "a-PE-of-10-is-a-great-buy-for-a-growing-company" rule of thumb.

This is a tougher comparison group than LGIH's direct peers by size. The Top 5 are the best operators in the industry, yet in many ways the comparison still comes off well for LGIH. Return on equity, gross and net margins are all strong. However, LGIH clearly stands out for "Sales per Community per Month" which demonstrates either strong sales execution or the attractiveness of its model, or both. So much for slowing with size.

LGIH has a hedgehog concept

One of our favourite parts of the business book "Good to Great" by Jim Collins was the idea of hedgehog concept. A great company has a simple secret to their success and they simply do more of it for more clients in more locations. Call it a competitive advantage. Like McDonald's (MCD) with faster burgers or Starbucks (SBUX) with better coffee/environments, they simply focus on keeping standards and rolling out more and more locations. Grow steadily over the years, you end up with a big and valuable company.

Do more of the same to a wider client base

As we've argued before, LGI Homes is a similar company that has a deceptively simple yet different approach from other homebuilders (building first and selling to budget buyers only). Like McDonald's in the 70s and 80s or Starbucks in the 90s and 00s, all they need to do is keep the same strong execution while rolling out more and more communities in more states and locations. Of course, there will be worries about new competitors, but we think you can ignore these. Not only is the market big enough, it is also disaggregated. Further, making a burger quickly is simpler than managing the construction of new homes at scale. Copying of LGIH's model isn't impossible, but it is harder than it looks.

After years of growth and achieving #10 in Fortune's 100 Fastest Growing companies in 2018, management have recently set out their next goal: to be a Top 5 US Homebuilder. Management hasn't provided a time frame yet, but we can examine the largest builders based on total closings, as they currently stand, to see what growth is yet to come. 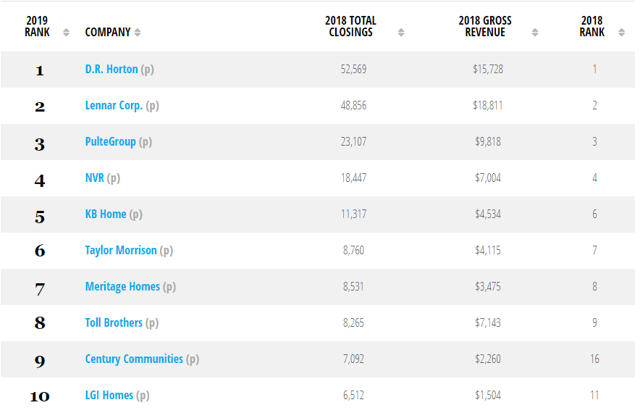 The path to the Top 5

We can map out a potential route to the Top 5 if we make the following assumptions: 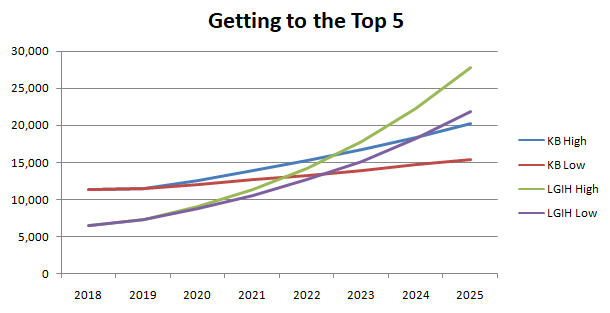 Thus, LGIH could enter the Top 5 US homebuilders as soon as the end of 2021 or as late as 2024. Given that the lowest market value of the Top 5 is twice the faster growing LGI Homes at $3 billion+, then you can see why we remain bullish for the long term despite market wobbles and doubts.

Buying a company with a PE of 10 makes sense even for a slow growing company, much less one with an historical growth average of 35-40% that can still easily achieve growth of 20% p.a.

Caterer Goodman Partners
591 Followers
CGP Asset Management manages discretionary trading accounts for clients in a “Global Technology Growth” strategy. This strategy combines quantitative and qualitative elements with a global perspective. The parent company Caterer Goodman Partners was co-founded by Owen Caterer in 2011 as a financial advisory firm, but since 2017 has focused exclusively on discretionary trading accounts on Interactive Brokers.

Disclosure: I am/we are long LGIH. I wrote this article myself, and it expresses my own opinions. I am not receiving compensation for it (other than from Seeking Alpha). I have no business relationship with any company whose stock is mentioned in this article.