In the aquarium industry, the Discus fish is known as the King of the Aquarium. Its colorful nature and striking characteristics make it the centerpiece of an aquarium. Similarly, Exxon Mobil (NYSE: NYSE:XOM) has Guyana. The purpose of this article is to discuss Guyana and its potential to generate strong long-term rewards for shareholders of Exxon Mobil. 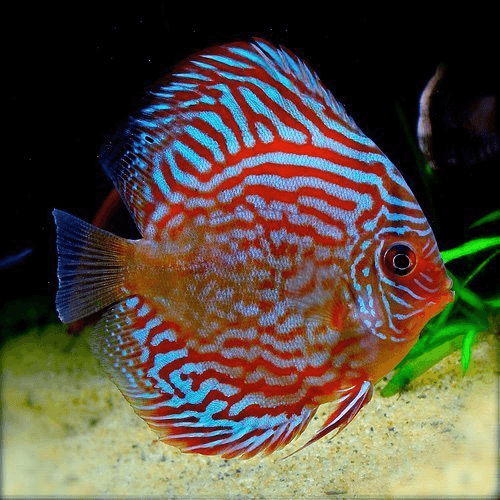 We cannot discuss the potential of Guyana for Exxon Mobil shareholders without starting by discussing the country. Next to Venezuela, Guyana is a small nation that was previously thought to have minimal oil resources. Even without production starting yet, the discovery has already started to transform the country.

Guyana is a small country. It’s also not a particularly wealthy country, with a GDP per capita just under $7,000. The company’s population is roughly 750 thousand, and almost half of these people live in the Georgetown metro area. The company has a primarily mining and agriculture based economy, with less than 250 miles of paved roads. All of this point to a country ripe for oil development.

There is something important to take into account there. Wealth changes society, it changes lives. There will be strong incentive here for Guyana’s government to maximize government revenue from the project. The terms of the deal with Guyana effectively result in the country receive 14.5% of revenue. Rewards will increase as Exxon Mobil recuperates costs, but these are considered great terms.

Already, there are discussions within the country about on the fringe end, renegotiating the deal with Exxon Mobil, but otherwise, having stricter deals with future countries. The best case here is the deal maintains its terms. However, with that said, this deal is the first time Guyana emerges on the world stage as a wealthy nation, and there is a risk that the country tries to take advantage of Exxon Mobil.

A vote of no confidence has already been held in the existing government (and successfully passed) as a result of the generous terms given to Exxon Mobil.

As a part of this overview, I want to take a moment to discuss Venezuela, a country in social and financial turmoil. While it has disappeared from the news cycle, there was a time when Exxon Mobil halted its exploration efforts in Guyana, as Venezuela attempted to lay claim to the discovery. Fortunately, Exxon Mobil’s planned exploration are on the far east side of the land - the far fringe of Venezuela’s claims.

That should minimize risks. The takeaway here is that Exxon Mobil’s discovery is so large that geopolitical forces will come into play. And there something investors need to pay attention too. With that said, let’s delve into the resource, the “King” of the portfolio. 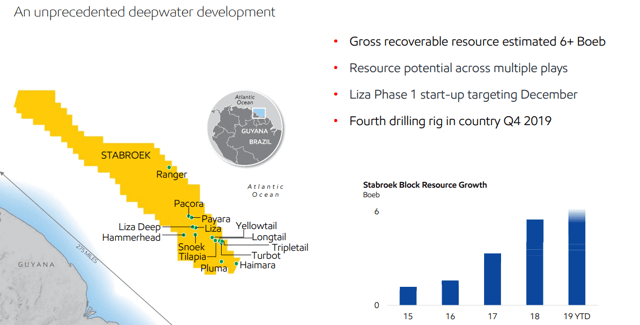 The company’s success in the region has come in the midst of numerous 3rd party dry holes around the discovery. The company here has an unprecedented deepwater development, with gross recoverable resources estimated at >6 billion barrels. For reference, the entire Permian Basin, now arguably considered the largest oil field in the world comparable with Saudi Arabia’s Ghawar Field, has 46 billion barrels in reserves.

Exxon Mobil is aiming for 1 million barrels per day of production in this region alone, and hundreds of other producers operate here, with a good number producing >100 thousand barrels. Exxon Mobil’s discovery amounts to almost 15% of this in recoverable reserves. More so, the size of the resource has grown significantly over the past few years, and I expect that to continue.

This discovery was a long time in the making with seismic studies conducted from 2009-2013 onwards. The company’s success here has been massive. Assuming no additional resource discoveries, the company’s planned production rates, even with forecast additional production opportunities, will allow more than 20 years of production.

I wouldn’t be surprised if resources more than double as exploration continues, especially on the western portion of the acreage.

Now that we understand the resource and discovery, let’s discuss the company’s production schedule.

In Dark Blue, and most important, is the company’s Liza Phase 1 drilling. Resources here, attributable to Exxon Mobil (it’s partnering with Hess (HES) and Chinese National Oil Corporation) should be 100 thousand barrels per day. This production and rewards (which should provide close to ~$1 billion in annual profits to Exxon Mobil) should come online as soon as next year and continue for the long term.

The company has also reached a final investment decision on Liza Phase 2. The company plans to use its Phase 1 learnings and start this up as soon as 2022 (which is <3 years from now). It should grow Exxon Mobil’s share to 200 thousand barrels per day, or $2 billion in annual profits.

Past that the company is investigating other expansions including Payara, which is progressing through early engineering. The project should add 100 thousand barrels per day to Exxon Mobil’s share, and will add another $1 billion in annual profits for Exxon Mobil.

Future projects are being defined still. Exxon Mobil went from 10 drilled and 15 undrilled projects in 2017 to 15 drilled and 40 undrilled in 2019. That means that the company has more undrilled prospects than the total number it had in 2017. The company is looking at Projects 4 & 5, with a 2025 start up, that could add 100 thousand barrels to the company’s production.

One final thing I want to discuss is the potential of sulfur in the oil. Tullow Oil (OTCPK:TUWLF) (OTCPK:TUWOY) recently announced that it was reassessing the viability of its Guyana oil production given high levels of sulfur in the oil. The discovery had a massive negative impact on Tullow Oil’s stock, and a substantial negative impact on Hess Corporation’s stock. Interestingly enough, the impact on Exxon Mobil’s stock was much smaller.

For reference though, investors were overreacting. Tullow Oil reported API of ~45 and a sulfur content of 2% from its wells. Saudi Arabia’s Ghawar Field, which has some of the lowest industry costs, has 2% sulfur and an API ~30-35. Exxon Mobil has reported that the Guyana oil it has found has ~0.5% sulfur and an API of 30-35. That is quality crude oil.

It’s also important to keep in mind that what might be unprofitable for Tullow Oil could be very profitable for Exxon Mobil, solely because of the difference in scale of the company’s operations.

Guyana is the King of Exxon Mobil’s portfolio. With the various expansion projects, which are likely an understatement given how much the project has grown in recent years, it could increase the company’s production by double digits and its profits by even more. The company has continued to explore heavily in this region, and I expect reserves and production forecasts to go up.

The region is very profitable. It does have some geopolitical risks, but sulfur risks are overblown. I expect the region will be a long-term cash cow that isn’t discussed by the investment community, and I expect, given Exxon Mobil’s low share price, investing now will be a strong long-term reward opportunity.

Regardless of your general investing goals, The Energy Forum can help you build and generate strong income from a portfolio of quality energy companies. Worldwide demand for energy is growing quickly, and you can be a part of this exciting trend.

If you're interested in learning more, click here. If you have any questions, send me a PM.

The Value Portfolio
27.96K Followers
Author of The Energy Forum
The #1 Service for Energy Investors, Actionable Ideas and Model Portfolios!

Disclosure: I am/we are long XOM. I wrote this article myself, and it expresses my own opinions. I am not receiving compensation for it (other than from Seeking Alpha). I have no business relationship with any company whose stock is mentioned in this article.

88 Comments
To ensure this doesn’t happen in the future, please enable Javascript and cookies in your browser.
Is this happening to you frequently? Please report it on our feedback forum.
If you have an ad-blocker enabled you may be blocked from proceeding. Please disable your ad-blocker and refresh.