Ross Stores (NASDAQ:ROST) has just confirmed its positive business momentum, beating estimates in the quarter and delivering solid comparable store growth. As the off-price retailer paves the way for top line growth through its stores expansion plan and continues to resonate with value-focused shoppers with a wide assortment at bargain prices, we believe the company remains well-positioned to thrive in this competitive retailer environment. Therefore, we believe it is worth holding shares of Ross Stores, despite the premium valuation compared to the apparel retail sector.

Revenue beat estimates by 2.1% in the quarter, coming in at $3.8 billion, up 8.5% over a year ago, with an increase in the size of the average basket and higher traffic, leading to a robust grow of 5% in comparable store sales.

The performance was well-distributed among categories and geographies, with strong execution in kid's and men's merchandise, and improvement in ladies' segment as well.

Operating margin of 12.4% was nearly flat over last year, as growth in merchandize margin was offset by higher wages and distribution expenses, and earnings per share came in at $1.03, beating estimates by $0.03 and up from $0.91 a year ago.

The retailer continues to execute its store expansion program, with 30 Ross and 12 dd's DISCOUNTS openings in the quarter. The company plans to finish the year with 1,546 Ross and 259 dd's stores in operation, corresponding to a net increase of 89 locations in 2019.

Going forward, the management team seems comfortable with the forecast to open 100 stores a year and sees opportunity to reach 3,000 stores in the long term, expanding its coverage to new markets such as the Midwest to become a U.S. national retailer.

This expansion strategy should be a key driver to sustain Ross Stores' top-line growth exhibited over the past years. In addition, the company's ability to source off-price products from a variety of suppliers will be critically important to keep offering a diversified assortment of items at bargain prices to shoppers, maintaining high-traffic in stores, while sustaining margins in the years ahead.

The chart below shows the revenue growth trajectory over the past five years, together with a healthy combination of sustained margins and controlled SG&A expenses. As we can see, while EBIT margins remained roughly constant during the period, the return on deployed capital has improved over the last two-year period and EPS has nearly doubled. Importantly, just a small portion of this EPS growth can be attributed to shares repurchases, as the number of shares outstanding have only dropped 12% during the same period.

While Ross Stores is typically an off-price apparel retailer, it is appropriate to use a broader range of companies in the sector to better evaluate the financial and valuation metrics on a comparative basis. Therefore, we selected all 18 holdings of XRT SPDR S&P Retail ETF that belongs to the apparel retail sector, as listed below: 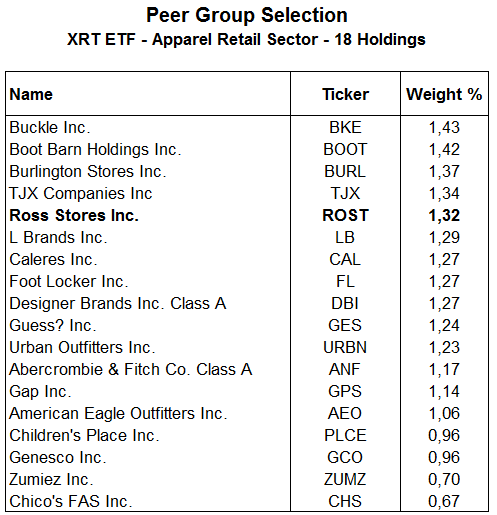 Source: Data from SPDRS, consolidated by the author

Starting with earnings quality, we see on the table below that Ross Stores' Gross Profit Margin is at the bottom of the peer group, while it is top ranked for Gross Profit 5-year CAGR and EBITDA, as the company has been able to preserve margins over time, unlike many peers who have struggle in the past years. Meanwhile, Ross Stores is ranked 1st for ROIC and has still seen this metric grows above the average. In aggregate, Ross Stores' rank 5th is well deserved, as stable margins differentiate the company relative to the peer group.

From the financial health perspective, Ross Stores is ranked 1st for Debt/EBITDA, as its 1.42x ratio is well below the average. On top of that, interest expenses are also well-covered as well and cash flow covers nearly half of liabilities.

With respect to valuation, Ross Stores looks pricey compared to the peer group, as shares of many retailers have been battered in the face of lingering margin pressures and low top line growth. In light of this sizable price dislocation, it is particularly important to take into consideration complementary elements describing the current business environment in conjunction with valuation multiples to properly assess a company or a market sector. In the specific case of Ross Stores, factors such as the evolution of margins and invested capital, as well as the financial leverage profile just covered in this article are probably key drivers behind the significant premium carried by Ross Stores compared to the peer group average.

On top of that, Ross Stores is also a top tier stock in the sector when it comes to the dividend policy, as the company has increased dividends more than three times above the peer group over the past years and also has one of the lowest payout ratios. Although the dividend yield is relatively lower than average, its dividend growth policy should be an additional factor to attract investors in this low interest rate environment.

Sustainable top line growth and well-controlled margins are definitively crucial drivers supporting Ross Stores to achieve earnings growth at the present time and in the years ahead.

On top of that, the retailer offers above average earnings quality and financial leverage profile, suggesting shares prices can continue to climb in the future, despite premium valuations compared to the peer group.

Carlos R. Tartarini
332 Followers
I am an individual investor. My main focus on investing is to achieve capital appreciation by selecting high value and compelling growth opportunities.
Follow

Disclosure: I am/we are long ROST. I wrote this article myself, and it expresses my own opinions. I am not receiving compensation for it (other than from Seeking Alpha). I have no business relationship with any company whose stock is mentioned in this article.