We argued back in August that the sell-off in Asure Software (NASDAQ:ASUR) was overdone and that turned out to be the case: 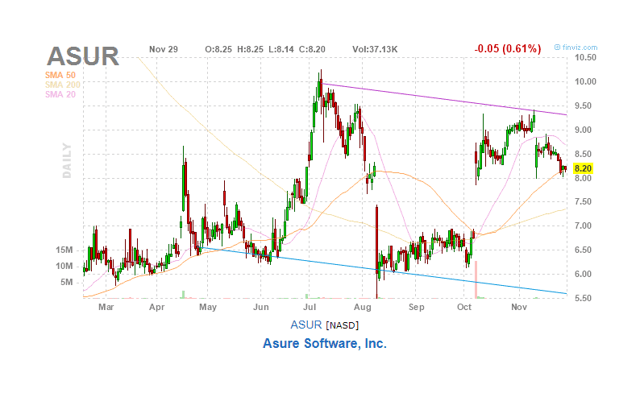 The company has certainly been growing nicely, even though its net income has moved down:

The $9.5M or so in net loss over the past 12 months is a GAAP figure, non-GAAP the company is actually profitable (+$5.7M). The GAAP net loss is roughly equal to the interest cost savings the company will get from the big reduction in debt as a result of selling its workspace business, although there will be some transition costs as well.

Since this is a main event affecting almost everything else, let us turn to that divestiture first.

The shares' rally which we were predicting back in August happened mostly as a result of something we could not have foreseen, so it was at least in part a lucky strike. The company is selling the smaller one of its two divisions, its workspace business; from the earnings deck: 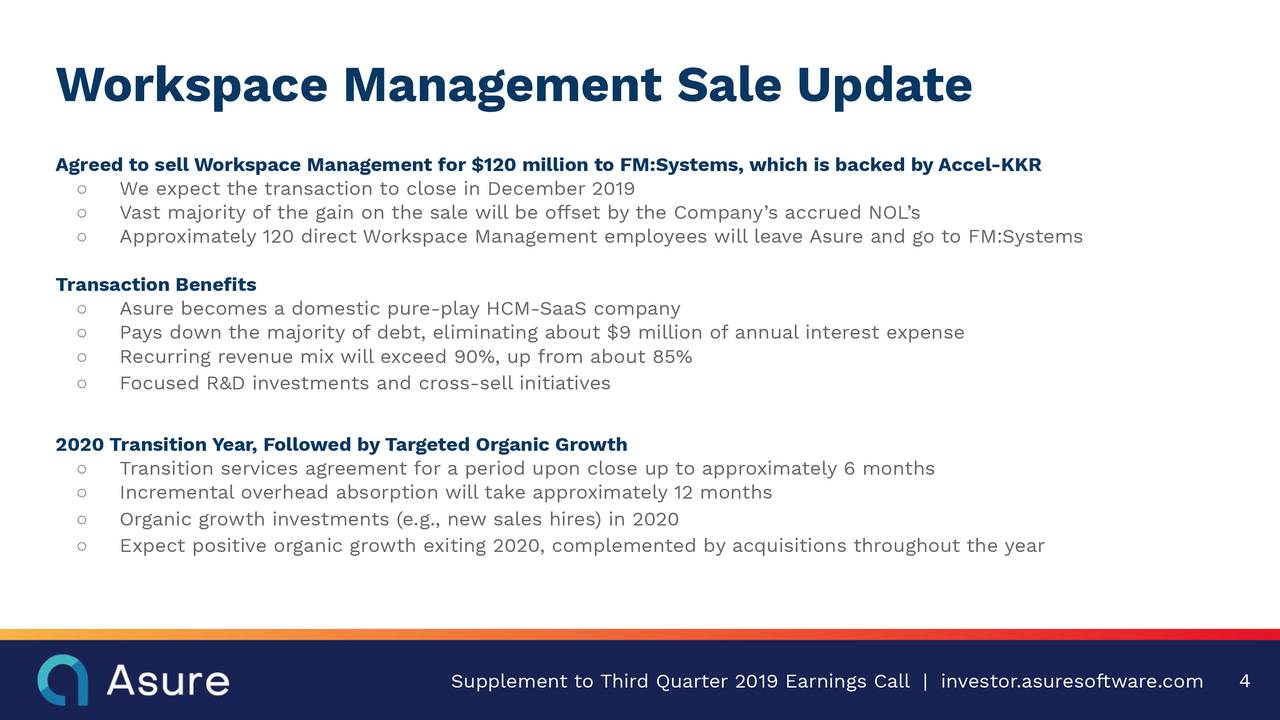 The business is sold for $120M in cash on a debt-free, cash-free basis, which will allow the company to greatly improve its balance sheet, cutting its $124M debt to a much more manageable $20M-30M and cutting interest expenses by some $9M in the process.

The Q3 results for the workspace business came in a little light with a decline of 4% but management argues that this was because of the distraction of the sales process.

What's left is a HCM SaaS only business, which has now migrated to AWS and consists of the following elements (earnings deck): 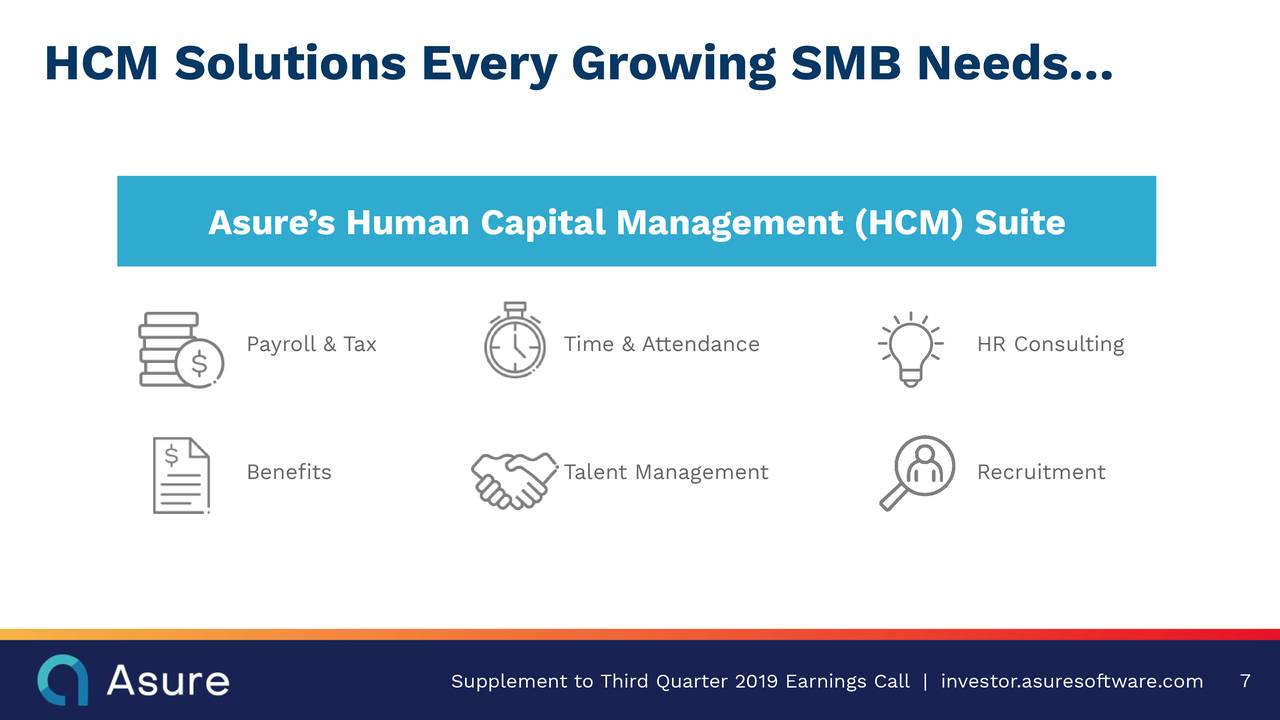 The HCM business is an attractive business, with the company getting most of its customers from the SMB sector (earnings deck): 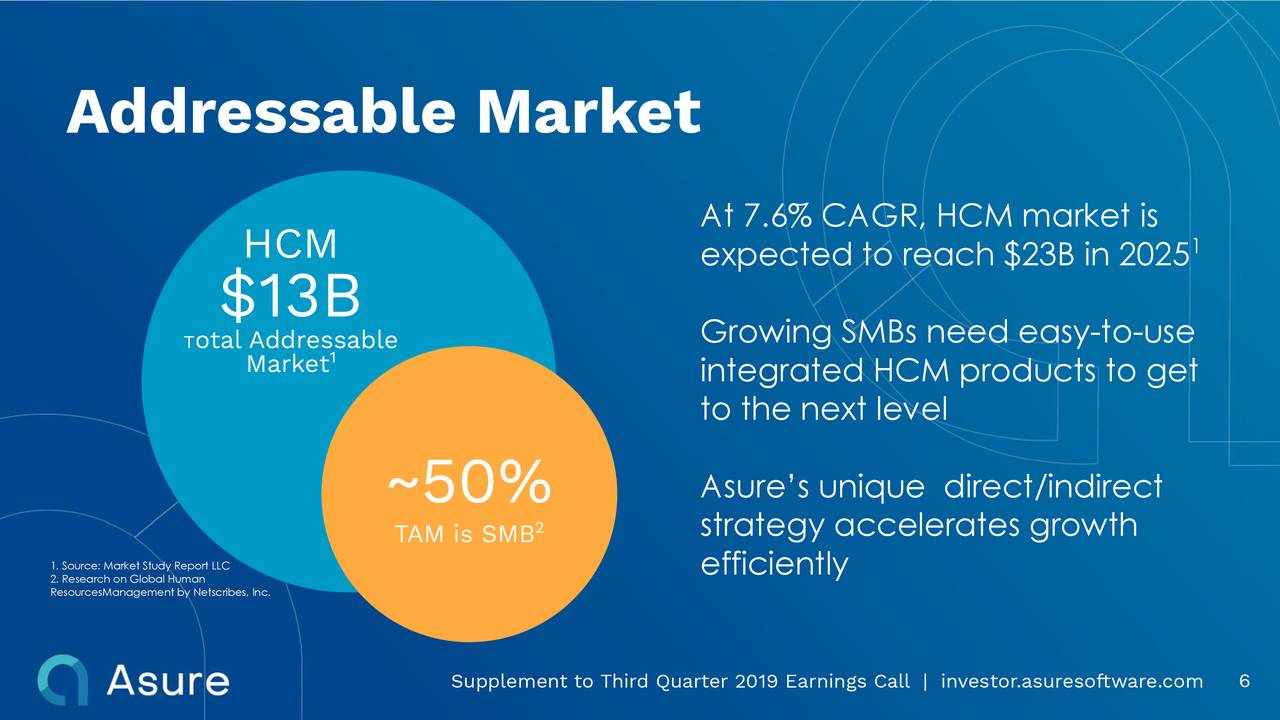 Management argues that longer term (after the transition year 2020), its HCM business can grow at 8-12% (earnings deck): 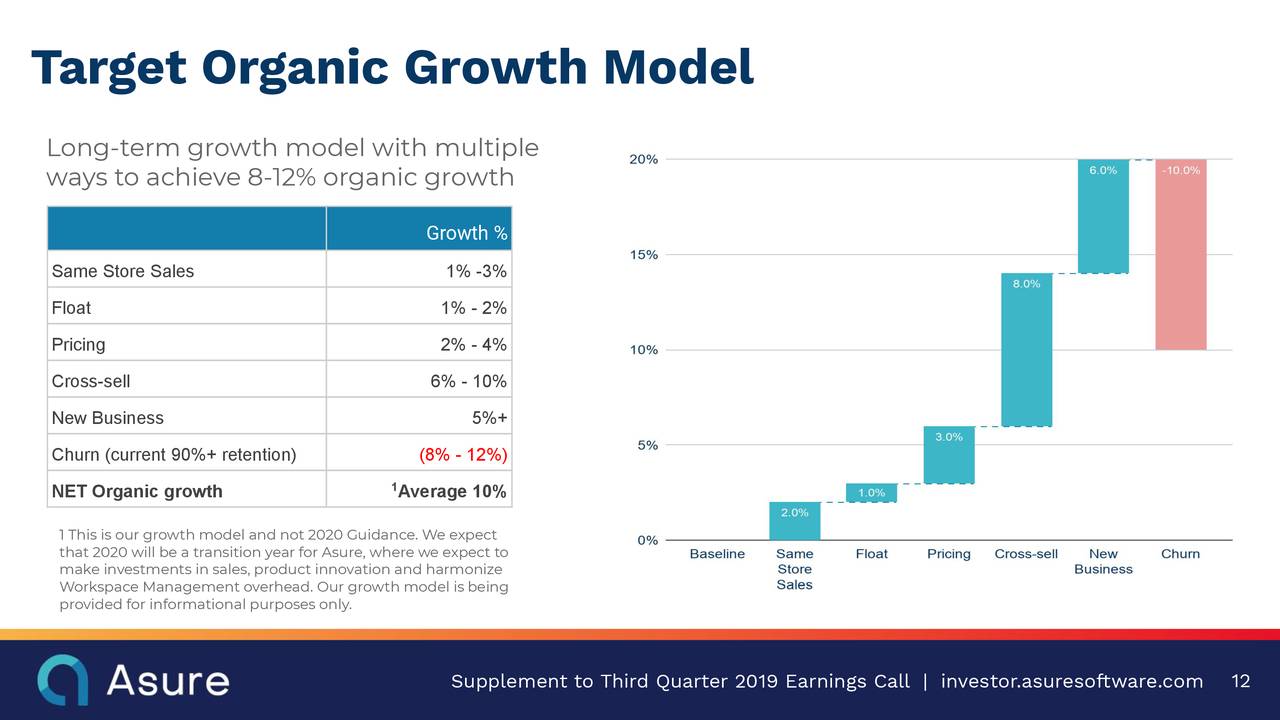 As one can see, the bulk of that will have to come from cross-selling and there are ample opportunities here as the large majority of customers has just one product.

One of the more curious things is that management argues that 2020 is going to be a transition year with revenue growth (now of course as a pure HCM play) of just 0-1%. We have a hard time understanding that.

For starters, HCM was growing at 8% in Q3 and bookings came in at a whopping +38%, with the post transition year revenue growth guided at 8-12%. What is causing the slowdown in 2020?

What we do understand is that the company needs some 12 months to absorb the incremental overhead from workspace, but this is affecting margins, not revenue growth.

Management also argued that it is ready with its infrastructure, its transition to AWS is complete, so is its implementation of NetSuite, as well as a network of service hubs across the country (Q3CC):

Now that the infrastructure’s in place with NetSuite and AWS and the service hubs across the country, we feel that we can make acquisitions very prudently

If it's ready to absorb acquisitions it should be ready to absorb more sales, we're inclined to say. One thing that does offer some sort of explanation is that the company is foregoing one-off consultancy work (Q3CC):

Explicitly in our guidance for 2020 being a transition year, we’re less interested in doing consulting for consulting sake and getting onetime consulting revenue.

But one-off consultancy revenue can only be 6% of revenue, as recurring revenue in HCM was 94% of revenue in Q3. An analyst at the Q3CC had the same problem as us and found the flat revenue guidance hard to square with the 38% growth in bookings. Here is what management answered (Q3CC):

We started that process and we’re emphasizing the recurring kind of areas of consulting along with the human capital management and that’s the core business now going forward. So to have the 38% bookings growth, which is a leading indicator ultimately of revenue growth and as we worked through that onetime consulting, you’ll see towards the second half of the year in 2020 that those compares will be past us and we anticipate now growing at the long-term model

So we take it that all of the 6% non-recurring HCM revenue is consulting and all of that is going to fall off. The company is also building out its sales force, which has four components (earnings deck): 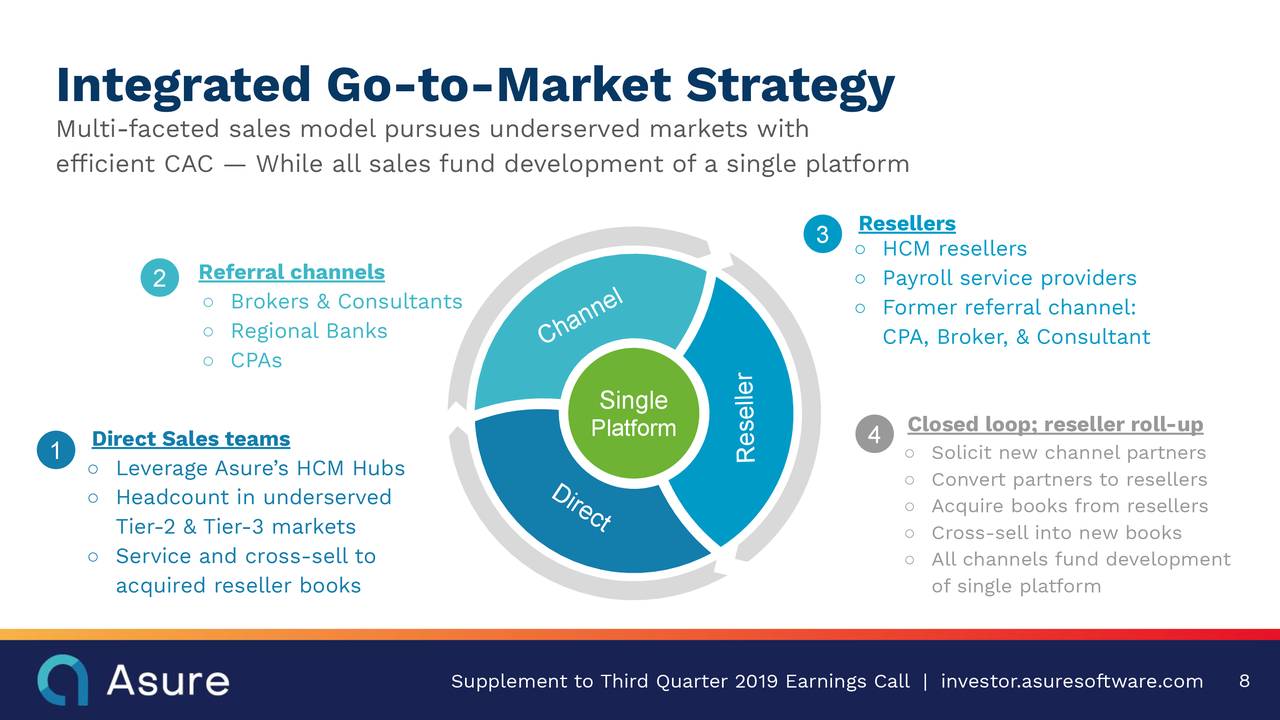 The company is going to increase the direct sales force, especially in tier 2 and tier 3 cities where there is less competition and it has many referral channels like CPAs, banks, consulting services, benefit brokers, etc.

Detracting the sales force for the workspace business, there is a jump penciled in for 2020 (earnings deck): 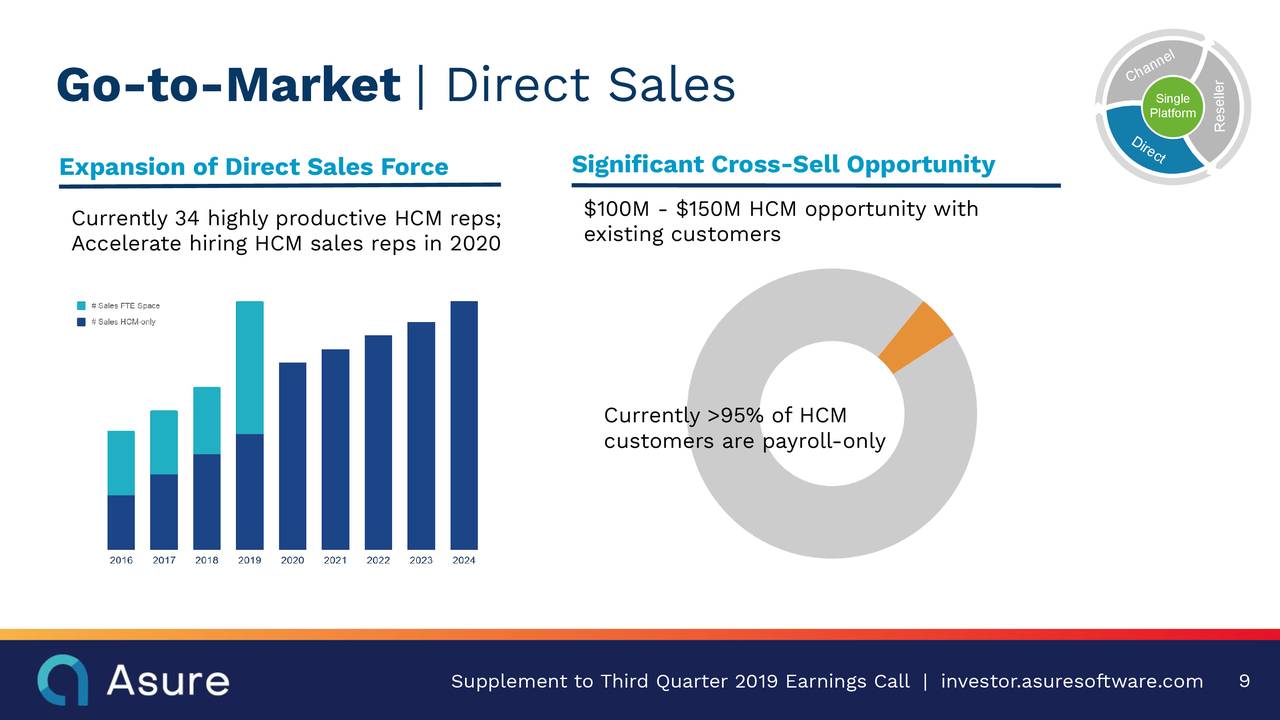 While we realize that this takes training and up to 12 months to get these new sales people up to full speed, it is difficult to see this as contributing to the flat revenue growth.

If anything, it should increase revenue growth at least a bit, even if they're not all hired at once and not immediately fully productive. The cross-selling opportunities seem especially significant with 95% of the clients just having payroll and none of the other products.

Many of the referral partners become resellers, and in Q3 the company added 16 new resellers (earnings deck): 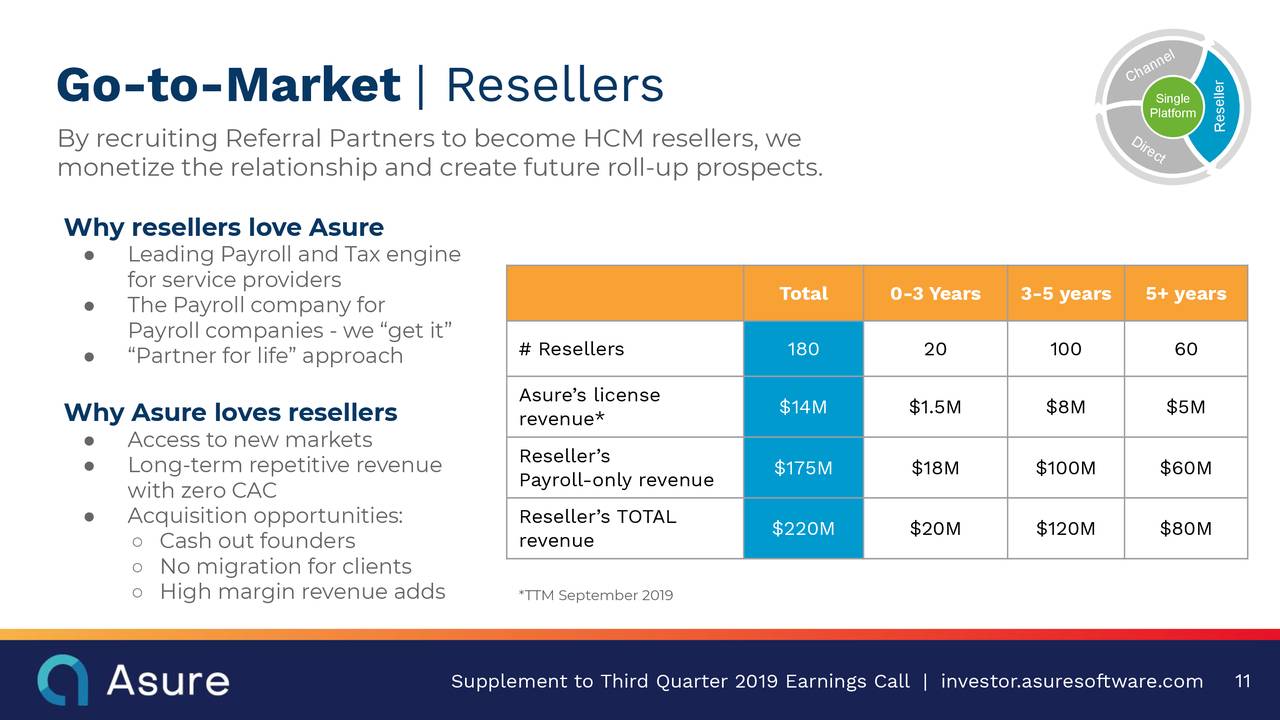 The margins in the graph above are GAAP figures, the non-GAAP figures (excluding stuff like share-based compensation) are a bit higher. Non-GAAP gross margin came in at 65.6%, still down from last year's 67.9% and that despite the very high margin $457K in interest on client funds in Q3, which was up from just $20K last year.

Non-GAAP operating margin was actually positive, and the company generated a non-GAAP EBITDA margin of 21.9% versus 22.9% last year.

Cash flow has been improving and is likely to improve further with the elimination of roughly $9M in interest cost. At the end of Q3, the company had $12.9M in cash and $124M in debt, but this will of course change a lot with the closing of the workspace sale.

Stock-based compensation is really rather modest although there has been significant dilution related to acquisitions.

These metrics do not yet capture the sale of the workspace business, how does this change things? A few metrics:

That is, we get an EV/S multiple of 1.65x, which is really downright cheap. Analysts expect a (non-GAAP) EPS of $0.36 this year rising to $0.44 but we don't know whether these are updated figures, given that in the first three quarters of the year the company already attained a non-GAAP EPS of $0.41.

We are not aware that management guided for a non-GAAP loss in Q4 but that is not impossible as management argued it needs 12 months or so to eliminate the excess overhead that remains after the divestiture.

Given the $17.2M of non-GAAP EBITDA in the first three quarters and the FY2019 guidance of $11M-12M, a non-GAAP net income loss seems indeed extremely likely. Here is how the company is supposed to look longer term (earnings deck): 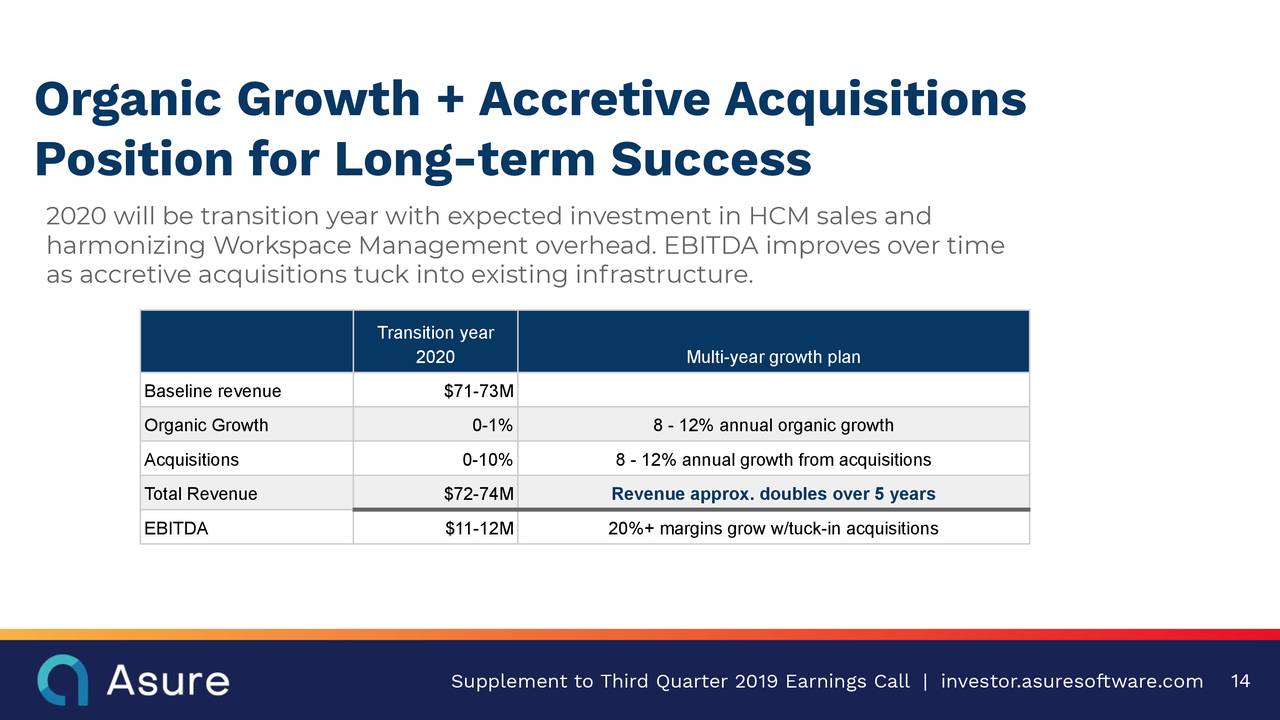 The picture for the immediate future isn't entirely clear as margins are marred by transition costs of the divestiture and this transition period is going to last for another year.

While it might seem early, if you can look beyond that, a much more benign picture emerges with the shares being rather cheap, growth returning and margins recovering and a balance sheet that is much more sound.