Sell/Buy Ratio: The insider Sell/Buy ratio is calculated by dividing the total insider sales in a given week by total insider purchases that week. The adjusted ratio for last week went up to 20.41. In other words, insiders sold almost 21 times as much stock as they purchased. The Sell/Buy ratio this week compares unfavorably with the prior week when the ratio stood at 11.72. 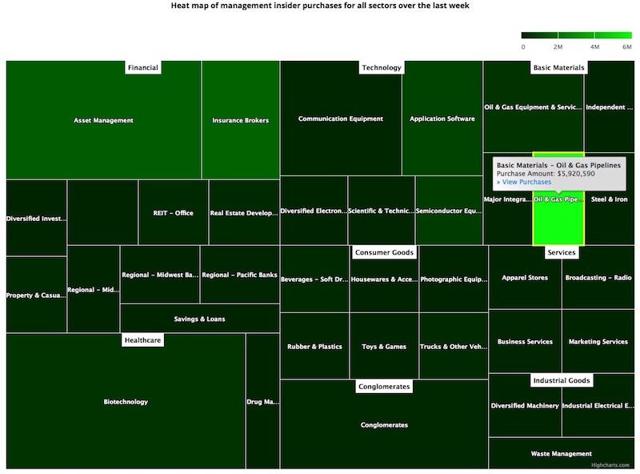 Note: As mentioned in the first post in this series, certain industries have their preferred metrics, such as same-store sales for retailers, funds from operations (FFO) for REITs and revenue per available room (RevPAR) for hotels, that provide a better basis for comparison than simple valuation metrics. However, metrics like Price/Earnings, Price/Sales and Enterprise Value/EBITDA included below should provide a good starting point for analyzing the majority of stocks.

William “Bill” Greehey is the founding Chairman and CEO of Valero Energy and held those roles for a period of over 25 years. He has been Executive Chairman of NuStar Energy L.P. and group since 2006. According to the company, NuStar “currently has approximately 9,900 miles of pipeline and 74 terminal and storage facilities that store and distribute crude oil, refined products and specialty liquids. NuStar has been ranked as one of FORTUNE’s 100 Best Companies to Work For for 10 consecutive years."

I have seen several insider purchases by Mr. Greehey over the years, but this purchase stood out for a couple of reasons. This is his largest purchase in over two years, and the last time he purchased this much was back in April 2017, when he purchased units at an average price of $46.35 as you can see here. The other reason the purchase stood out was because of all the insider buying by the insiders of Kinder Morgan we discussed last week.

The company is structured as a Master Limited Partnership and has a distribution yield of 8.5%. Because of its structure, you are going to get a K-1 from the company even if you hold the units in a retirement account. Kinder Morgan has a lower yield but is structured as a corporation. It was one of the first companies in the energy industry to favor the Master Limited Partnership (MLP) structure that allowed companies to pay no corporate taxes and pass all their profits to investors as distributions. More than four years ago, it was also one of the first to abandon the structure by merging its four pipeline companies into a single one and adopting a traditional C corporate structure.

Shares of this oil & gas equipment & services company were acquired by 3 insiders:

Director Samuel H. Altman acquired 20,000 shares of this online travel company, paying $98.83 per share for a total amount of $1.98 million. These shares were purchased indirectly by Altman Holdco, LLC.

Sam Altman is a Silicon Valley investor and entrepreneur who worked with the startup accelerator Y Combinator from 2014 to 2019 and left the company to start OpenAI. The group’s mission is “to ensure that artificial general intelligence benefits all of humanity,” and it received an investment of $1 billion from Microsoft earlier this year.

Mr. Altman was appointed to Expedia’s board in September 2019, and since new directors often buy stock of the company, I would not read much into the purchase.

Chief Investment Officer Andrew T. Feldstein acquired 38,340 shares of this insurance company, paying $49.09 per share for a total amount of $1.88 million. Mr. Feldstein increased his stake by 8.89% to 469,470 shares with this purchase.

Shares of this Uber were sold by 3 insiders:

We wrote the following about an insider purchase by the CEO of Uber last week:

“Uber’s stock had recently been under pressure from heavy selling related to the expiry of the six month post-IPO lockup period. This purchase helped the stock register a gain of more 5% the day after it was filed. While the purchase appears to be an open market purchase (there were no footnotes in the filing to indicate otherwise), it was odd to see another insider sell the same number of shares at the same price on the same day as you can see below.

Mr. Khosrowshahi’s purchase is dwarfed by the nearly $750 million in sales by Uber’s founder Travis Kalanick in a single week.”

Chief Executive Officer Jayson A. Adair sold 702,686 shares of this online auctions and vehicle remarketing services provider for $90.37, generating $63.5 million from the sale. These shares were sold indirectly by a trust.

Shares of this investment brokerage were sold by 3 insiders:

Director Sarah Bany sold 207,653 shares of this apparel manufacturing company for $91.48, generating $18.99 million from the sale. These shares were sold indirectly by a trust.

Shares of this medical devices company were sold by 3 insiders:

You can view the full list of sales from this Insider Sales page.

Additional disclosure: Disclaimer: Please do your own due diligence before buying or selling any securities mentioned in this article. We do not warrant the completeness or accuracy of the content or data provided in this article.

Follow Asif Suria and get email alerts
+
Add a comment
Disagree with this article? Submit your own.
To report a factual error in this article, click here.
Your feedback matters to us!