Midstream stocks have vastly underperformed the market and are collectively yielding 10%.

No signs of obvious distress or balance sheet issues, and despite moderating growth prospects, medium-term fundamentals are solid.

No meaningful signs of capitulation from management teams and they continue to sell the equity story. Have insiders been buying shares in the last twelve months?

MLP (and C-Corp.) midstream companies (for simplicity, will refer to them broadly as MLPs) have vastly underperformed the market, decoupled from oil price, and even after a series of restructuring and cleaning up of balance sheet, the index trades at a distribution yield of 10%. Even some of the integrated large-cap names trade at or above 10% distribution yield. Just as a reminder, US Treasuries are below 1.8%, and roughly two-thirds of bonds in Europe and 25-30% of all investment-grade debt in the world carry negative yields to maturity. Valuation metrics point to some of its lowest points in MLP history and certainly relative to the broader market. Excluding distributions, Alerian MLP ETF (AMLP) dropped 16% while oil price (USO), utilities (XLU), and S&P 500 (SPY) increased 11%, 15%, and 18%, respectively in the last year. AMLP dropped 25% while oil price, utilities, and S&P 500 increased 4%, 12%, and 19%, respectively in the last two years. In case you are interested, AMLP dropped 56% while S&P 500 increased 52% in the last 5 years. I can keep going but I will leave it at that.

This is taking place while there are no obvious signs of distress/balance sheet issues. Yes, the world has changed, and E&Ps are going to grow at a slower pace; oversupply trend of all hydrocarbons out of the US will put downward pressure on price and this fear of global recession (that seems to be perpetually 6-12 months away) point to a much weaker supply/demand dynamic. Having said all of this, most consensus data still point to growth (oil, gas, and NGLs) in L48 in the medium term from all key basins. Sure, it depends on where you are and downward pricing trend is likely when contracts are up for renewal, etc. But again, MLPs are ultimately driven by volume and taken as a whole, fundamentals are decent for primary drivers of the business (especially when you contextualize their valuation and yield).

Just to be clear, I am not entirely unsympathetic to why there has been a wide sell-off in MLPs. The general malaise in the energy space is real. Few Democratic presidential candidates are proposing universal frac ban (or some variation of it) - arguably one of the most un-American policies - and are actually doing okay in polls. So, even though it will be nearly impossible to implement it in practice (other than on federal lands), it is creating a lot of headlines and existential risks. MLPs have a terrible track record of governance and for an asset class that was marketed as a utility-like income vehicle, series of distribution cuts, counterparty credit risk, and higher capital intensity with lower than expected return profile scared away its investor base.

So, even though I am somewhat optimistic and feel that the sell-off is overdone - when it feels like the sky is falling and you are completely outnumbered by doubters in the market, not much you can do other than to be patient. In any case, MLP management teams have been chugging along and are pretty much doing what they have always been doing (maybe with a slightly improved sense of capital discipline). They are still talking about their book and claim that there are compelling organic growth project opportunities and share buyback opportunities in light of stock performance. So are they putting their money where their mouths are? Insider transactions (buy or sell) don't necessarily reveal management team's level of conviction about their companies and their equity story, but if you thought there is really a case for an equity story going forward (even remotely), in light of share price performance, it seems logical to conclude that the current level of sell-off is unwarranted.

Detailed summary of all transactions: 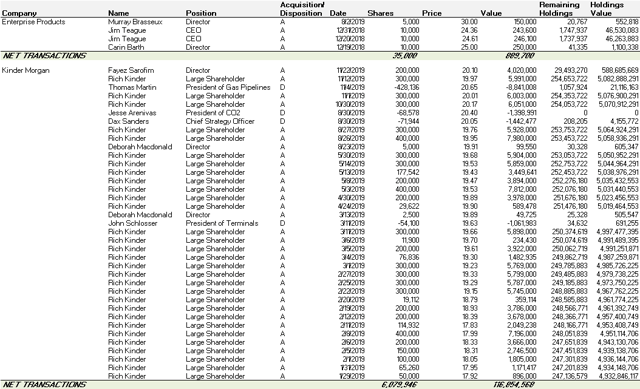 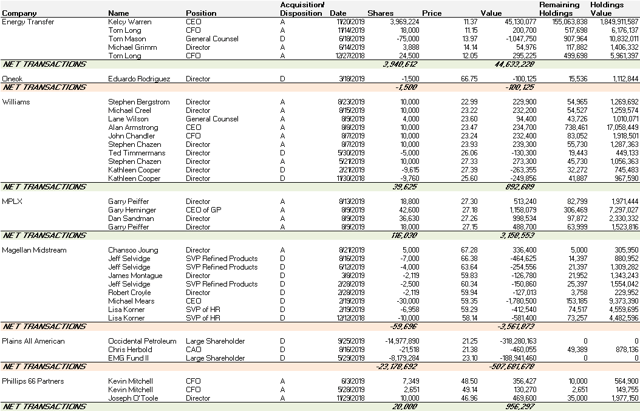 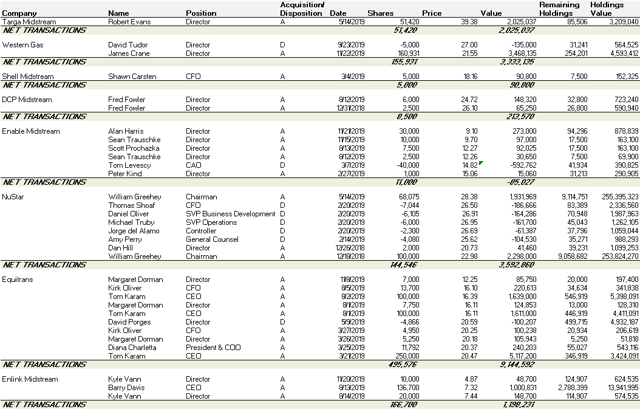 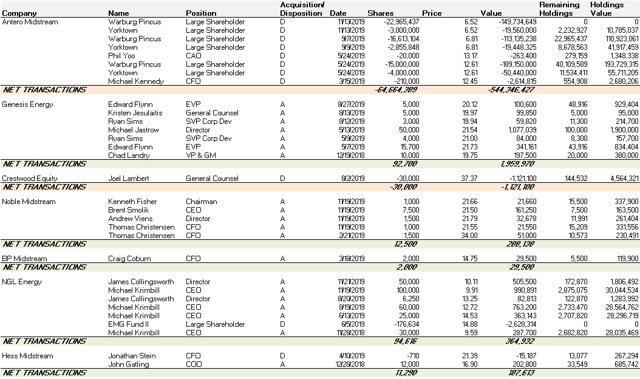 Insiders might sell their shares for any number of reasons, but they buy them for only one: they think the price will rise." - Peter Lynch

Disclosure: I am/we are long AMLP, USO, MPLX. I wrote this article myself, and it expresses my own opinions. I am not receiving compensation for it (other than from Seeking Alpha). I have no business relationship with any company whose stock is mentioned in this article.

Follow Small Cap Capital and get email alerts
+
Add a comment
Disagree with this article? Submit your own.
To report a factual error in this article, click here.
Your feedback matters to us!