Does the company have products or services with sufficient market potential to make possible a sizable increase in sales for at least several years? - Philip Fisher

If you've been following my work, you'd noticed that fundamental analysis is my cup of tea. In other words, forecasting clinical trial and drug approval is what I do best. To better serve IBI members, I've ramped up my market intelligence to include probability event forecasting and trading strategy. In my view, this is very important because, without the deep insight into high probability events, you won't be able to bank as much profits as you could. Having a prudent strategy is similar to having a road map to help you navigate the rough financial sea.

Putting knowledge into practical application, I believe that it's strategic for you to strengthen your portfolio by adding a steady grower like Galapagos (NASDAQ:GLPG). Now you need to be realistic. Galapagos won't increase over 145.6% gains in just 20 days like Clovis Oncology (CLVS) due to its large size. Nonetheless, Galapagos will add another layer of protection to help you conquer volatility while growing modestly. That being said, I'll feature a fundamental update on this stellar growth equity. And, I'll cue you in on another high probability event. 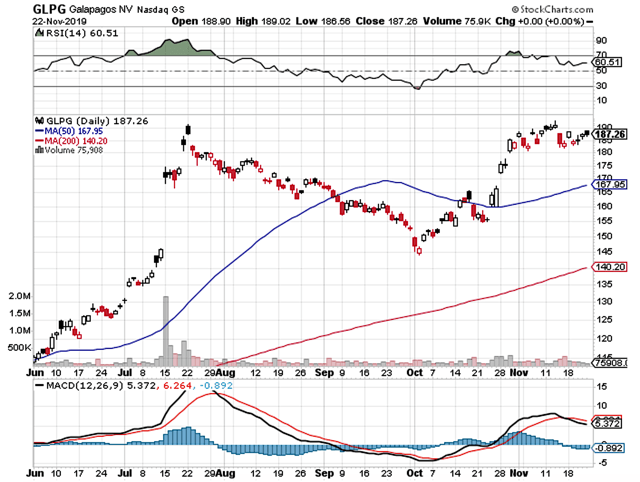 As usual, I'll deliver a brief corporate overview for new investors. If you're familiar with the firm, I suggest that you skip to the subsequent section. Operating out of Mechelen, Belgium, Galapagos is engaged in the innovation and commercialization of new drugs to serve the unmet needs in chronic and inflammatory diseases.

In brewing an extremely robust pipeline, Galapagos has medicines to capture a broad range of diseases. As the crown jewel, filgotinib (i.e. Filgo) is being assessed in a vast number of Phase 2 and 3 clinical studies. There is also a plethora of trials for over 20 different discovery programs. 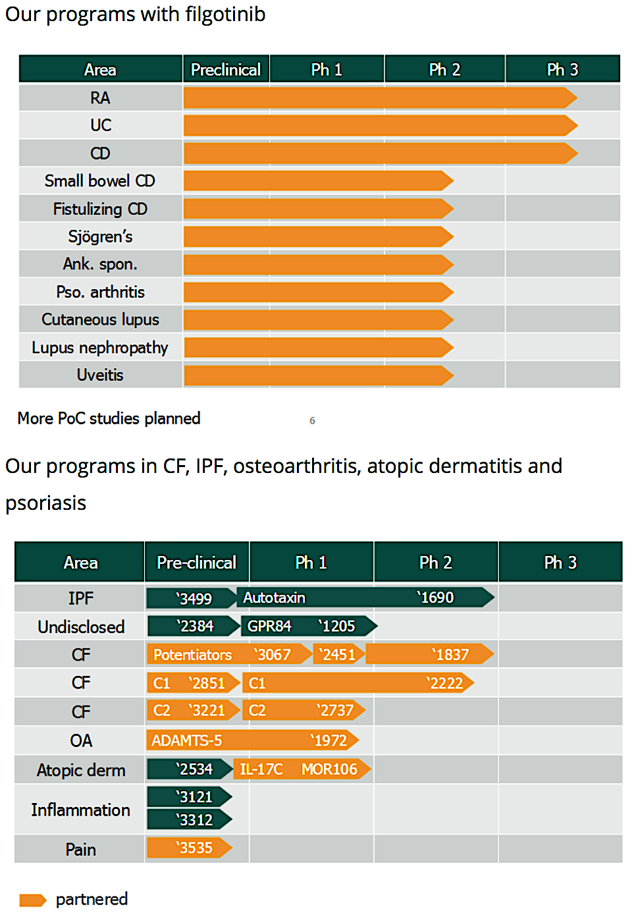 Since I initially recommended Galapagos, back in June 2018, the stock has returned 87.26% profits for IBI members. Members who missed the first rally still gained 10.2% when they got the market intelligence on July 17 this year.

You can believe whatever you believe but I'm not bragging profits. Instead, I'm telling you that, despite these gains, there are still significant further upsides. This is true for both the short-term and long-term. As the upsides are powered by fundamental development, you should assess the latest catalysts.

Mega-Blockbuster In The Making

Since Filgo is most valuable, you must learn what makes it special. Though there are similar drugs, Filgo is unique because it is a highly selective JAK1 inhibitor. By hitting its target 30 folds more accurate, Filgo doesn't suffer from the side effects of other JAK1 inhibitors.

That aside, Filgo has a more rapid onset of action than competing drugs. Like the finch birds that survive by conquering natural selection, Filgo thrived by demonstrating superior clinical efficacy and safety over the standard of care. Riding strong data, Galapagos is aggressively developing Filgo as a best-in-class medicine for many inflammatory and autoimmune diseases. Regarding specific trials, I wrote in the prior research:

Gilead Deal Is Paying Off

Shifting gears, I want to tell you about the love affairs between Galapagos and Gilead (GILD) that dated back on July 14 this year. That's because it unlocks tremendous value in your stock.

In a mega deal, Gilead paid Galapagos $3.95B upfront and another $1.1B investment in Galapagos' common stocks at the €140.59 share price. After holding its special shareholders' meeting on October 2, Galapagos granted Gilead the right to boost its stake.

Interestingly, Gilead increased its ownership of Galapagos to 25.1% by November 1. As such, this is remarkably higher than the 22% ownership that I anticipated. With its increasing commitment, you're probably thinking that Gilead wants to acquire Galapagos.

You're right because Galapagos anticipated it too. To prevent acquisition, Galapagos implemented a 10-year standstill in their agreement. That is to say, Gilead can only buy out Galapagos 10 years from now. If you have a multiple-year horizon, this is good for you. After all, it enables your stock to potentially grow multiple folds in the long run. That's what I believe Galapagos' management has in mind.

Aside from the financial aspects of that deal, you should analyze the pipeline advancement. Since the U.S. rewards new drugs with a premium pricing, we're regarded by the world as the Cradle of Innovation. Under the said partnership, Gilead secured Filgo's rights in the most lucrative market (i.e. the U.S.).

As FINCH delivered unquestionable data, Gilead will seek approval in the U.S. and Europe by year-end. Based on my regulatory forecasting, there is a 75% (extremely favorable) chance of an upcoming approval. If you're into trading, this is likely lucrative for you because it can spark a huge rally.

Regarding Europe, the companies fine-tuned their original contract. In other words, they will co-launch Filgo in France, Germany, Italy, Spain, and the United Kingdom. Hence, they'll share 50/50 in expenses and profits. Keep in mind that Galapagos chose to retain the exclusive right at home (i.e. Belgium) and nearby countries (i.e. the Netherlands and Luxembourg).

Asides from those European countries, the original terms remain the same. Specifically, Gilead will pay Galapagos tiered royalties ranging from 20-30%. Additionally, Galapagos is eligible to receive $1.27B in potential milestone payment.

In addition to Filgo, Gilead bought the rights to GLPG-1690 (a Phase 3 drug for idiopathic pulmonary fibrosis). The company also has the option to pick up GLPG-1972 (a Phase 2b drug for osteoarthritis). You can refer to my previous article for a detailed discussion of these two molecules.

Just as you would get an annual physical for your well-being, it's important to check up on the financial health of your stock. For instance, your health is affected by "blood flow" as your stock's viability is dependent on the "cash flow." With that in mind, I'll analyze the 3Q2019 earnings report for the period that concluded on September 30.

As follows, Galapagos garnered €752.5M for the first nine months this year compared to €205.1M for last year. Therefore, this represents an overwhelming 266.8% year-over-year increase. Of note, the robust improvement came from the Gilead collaboration.

Amid the €5.6B in cash/equivalents with modest spending, I'm not worried about a potential dilution. As he framed recent development in the most poignant terms, the CEO (Onno van de Stolpe) enthused:

There is no question that the third quarter was defined by the unique and landmark deal with our long-time collaboration partner Gilead, announced mid-July. This 10-year research collaboration is about maximizing innovation based on the identification and development of new mode of action medicines ... We will benefit greatly from Gilead's scientific expertise and infrastructure. Thanks to the progress made with Filgo this past quarter, we and Gilead are on track for potential new drug approvals as of 2H2020, and we are very excited by the prospect of bringing Filgo as a new treatment option to RA patients. 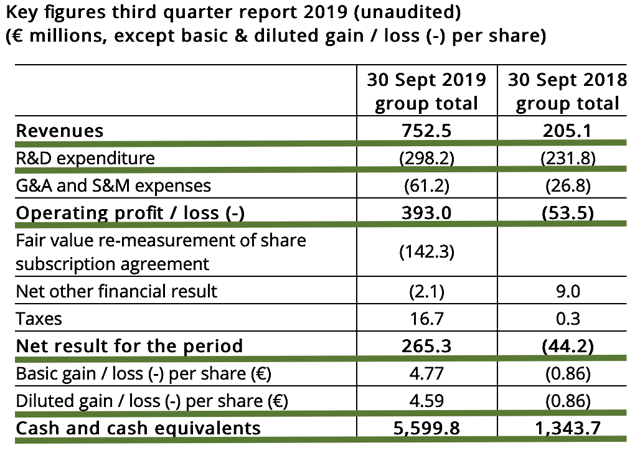 Since investment research is an imperfect science, there are always risks associated with your stock regardless of its fundamental strengths. More importantly, the risks are "growth-cycle dependent." At this point in its life cycle, the main concern for Galapagos is whether the partners can gain worldwide marketing for Filgo. As I believe in the extremely favorable chances of success, I ascribed only a 25% risk of a negative regulatory decision (i.e. complete non-approval).

In case of a non-approval for Filgo, I believe that Galapagos shares will tumble over 50% and vice versa. After all, most of the Galapagos' value resides in this molecule. Besides a non-approval, delayed approval is a possibility. And, it can cause the shares to slightly tumble. There is also the risk that other pipeline molecules like GLPG-1972 and MOR-106 might not yield good results. Notwithstanding, I doubt that Galapagos will tumble significantly because these molecules aren't the main attraction. And regardless of Filgo's strength, there is always a chance it might not generate blockbuster sales.

In all, I maintain my strong buy recommendation on Galapagos with the five out of five stars rating. As special growth equity, Galapagos currently has a $12.0B market cap. Despite its mid-size, I believe there is substantial growth ahead. The company is powered by an extremely vast pipeline with Filgo and other potential blockbusters. Since it's far better than other JAK1 inhibitors, Filgo will likely dominate the autoimmune and inflammatory disease market.

Within the next couple of years, it's spaghetti to sauce that Filgo will become a mega-blockbuster. Even if it cuts only a small fraction of the RA market, you're looking at several billion dollars in sales. The strong FINCH data and the Gilead partnership are solid proofs in the pudding of Filgo's therapeutic value. As such, the next evolutionary leap for Filgo is the FDA, EU, and Japan approvals. Leveraging Gilead's robust infrastructure, Filgo has the best chances of commercialization success. 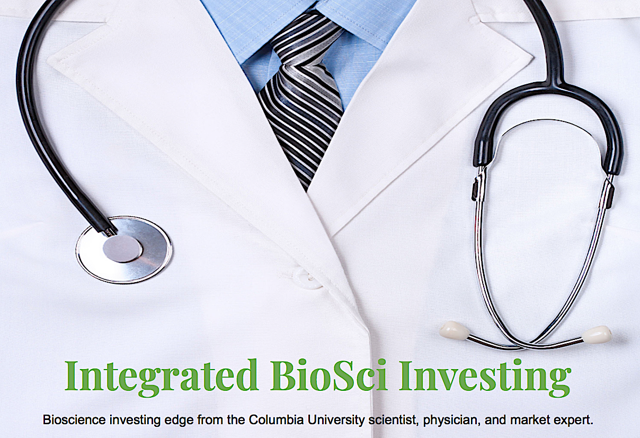 Thanks for reading! Please hit the orange "Follow" button on top for more. Don't miss out on the most profitable content (i.e. higher level intelligence) inside IBI. Here's what members said:

Dr. Tran's analyses are the best in the biotech sphere, well worth the price of subscription.

Very professional, extremely knowledgeable, and very honest … I would highly recommend this service, and his stock picks have been very profitable.

I'm so confident in the value of my service that I'm giving you a 2-week FREE trial, money-back guarantee.

GET YOUR FREE GIFT NOW!

Disclosure: I am/we are long CLVS. I wrote this article myself, and it expresses my own opinions. I am not receiving compensation for it (other than from Seeking Alpha). I have no business relationship with any company whose stock is mentioned in this article.