The catalyst was the most recent pit-wall failure at their new Tucano Mine in Brazil, a self-inflicted wound after the company tried to reduce the strip ratio with insufficient ground monitoring at their UCS Pit. Unfortunately, to add insult to injury, the company is now having issues at its other pits, which were supposed to replace production. This has prompted downward guidance revision, and this should lead to costs coming in at the high end of their guided range for FY-2019. Given that Tucano is the only mine in the company's portfolio worth writing home about, these issues are a potential coup de grâce for the stock. While bounces are possible, even when stocks are in bear markets, I would view any rallies as selling opportunities. Bottom-fishing strategies may work for great companies being unfairly punished, but I would not stick my fishing pole in the water in hopes of catching Great Panther stock. 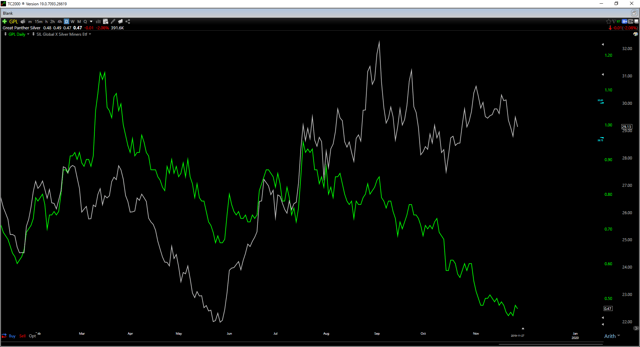 It's been a challenging year for Great Panther Mining stock, to say the least, and unfortunately, this dispiriting year has been shouldered by Beadell Resources (OTCPK:BDREF) shareholders as well. Great Panther acquired Beadell Resources in Q1 of 2019, after doing due diligence on their Tucano Mine in Brazil. The hope was to turn around operations and compensate for their Mexican operations, where there are barely enough margins to generate free-cash-flow. After a pit-wall failure, and new issues at the company's other Tucano pits that have led to a 40% drop in Great Panther's share price, Beadell Resources shareholders have gone from the frying pan into the fire. Beadell's share price performance wasn't impressive by any means either before Great Panther acquired them, but this likely isn't the fresh start that shareholders were looking for. 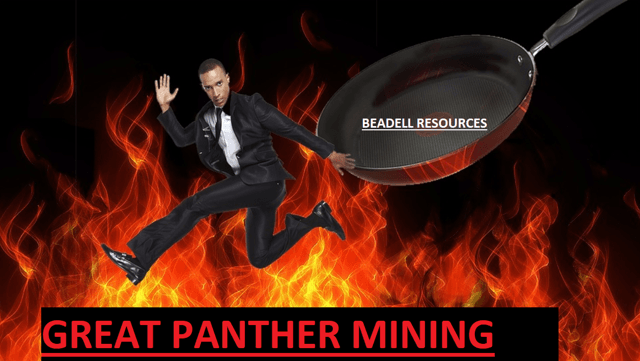 As we can see from the company's FY-2018 results, the company's operations at its silver mines in Mexico and Peru were not cutting it. The company reported all-in sustaining costs last year of $15.72/oz, and this was barely low enough to generate any margins. Based on the need for a better-producing asset, Great Panther announced it would acquire Beadell Resources with its Tucano Mine and Corriancha Project last September. The hope was that this would solve their cash-flow problems. While the purchase price was reasonable at $105 million and issuance of just over 100 million of Great Panther's shares, this led to significant dilution, with the share count now over 275 million shares, from roughly 165 million shares previously.

The biggest issue for the Tucano Mine was outlined in the Q3 earnings call in more depth, as the company tried to reduce the strip ratio, and this resulted in a pit-wall failure. In my opinion, this was avoidable, and the company is lucky that there was no one seriously injured when the failure occurred. The pit-wall failure came as a result of the company removing some of the catch benches in the Urucum South Central Pit, as well as steepening the benches as they went down the wall. In addition to being ambitious with the pit slope, Great Panther didn't adequately plan in terms of monitoring, design, and review when adjusting the mine plan. This was relayed in the most recent conference call by CEO Jeffrey Mason. 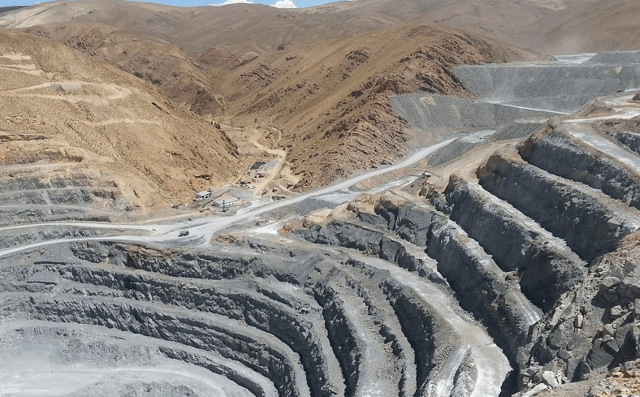 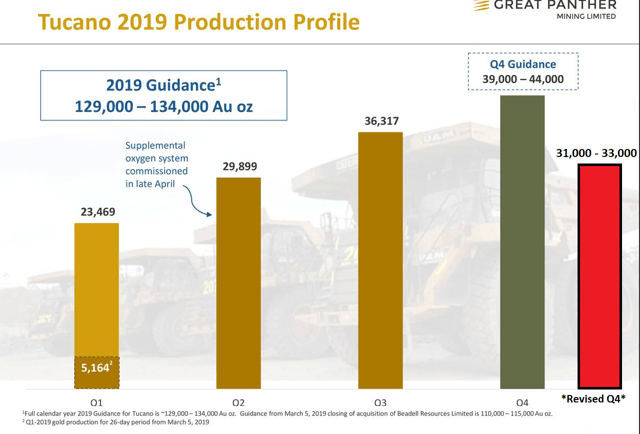 If we look at the new 2019 outlook, revised guidance for Tucano is 102,000 - 104,000 ounces from the March 5th acquisition closing to year-end, and this has dropped total gold-equivalent production for Great Panther down to 145,500 ounces at the mid-point. Furthermore, this will affect all-in sustaining cash costs, and I expect them to come in near the high end of the range at $1,280/oz for FY-2019. This should lead to barely 10% margins, and will likely see the company post yet another net loss for the year despite a massive improvement in metals prices.

The big issue now with the Tucano Mine is that we have 160,000 ounces of reserves in jeopardy at the Urucum South Central Pit [UCS Pit] if the pit wall failure issue can't be remedied. Worse, the pits where Great Panther has transitioned to, in the meantime, are also giving the company trouble. Urucum North and Urucum South are experiencing increased pit congestion due to more constrained mining geometries, as well as smaller blasts needed to separate ore and waste to reduce dilution. While these issues are nowhere near as significant as the UCS Pit wall failure, we've now got uncertainty as to whether the company can generate much cash flow from Tucano to bolster their balance sheet. Based on Great Panther's net debt of roughly $6 million and significant expenditures next year related to exploration, these issues are the last thing the company needed. A steady stream of cash-flow would have been quite helpful to reduce the required dilution if the company has to sell shares either through financing or ATM [At-The-Market Offering]. Unfortunately, given the recent adverse developments, this is not the case.

If we take a look at Great Panther's annual EPS below, we can see that they have posted net losses in six of the past seven years, and are expected to post a net loss of $0.06 per share for FY-2019. While FY-2020 estimates are sitting at $0.02 per share currently, I would argue that these estimates are ambitious as they were posted before the recent downward revision to guidance. Ultimately, I would be surprised to see the stock put up positive EPS of even $0.01 next year. However, even if Great Panther does manage to put up positive EPS of $0.02 for FY-2020, it is trading at a forward P/E ratio of roughly 23x based on the current share price near $0.47. This is only a slight discount to most other gold majors that are diversified and have significant free-cash-flow. 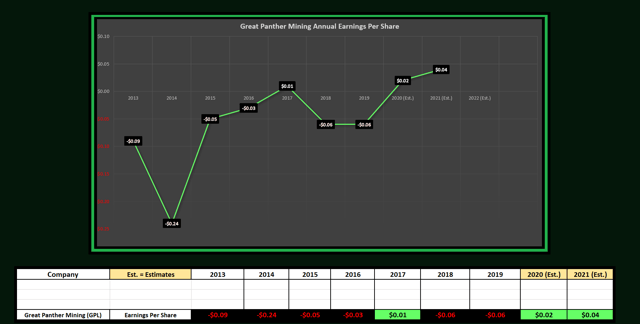 Given that many other gold majors have substantial earnings growth and are seeing positive annual EPS even at $1,200/oz, there is no reason to go bottom-fishing for Great Panther Silver at similar valuations. If there are several different miners available at 27.0x - 31.0x forward earnings multiples like Barrick Gold and Newmont Goldcorp (NEM), paying 23x for a miner with negligible margins seems unnecessary. At all-in sustaining costs of $1,384/oz for the first nine months of 2019 for Great Panther, the company has some of the lowest margins in the industry currently. 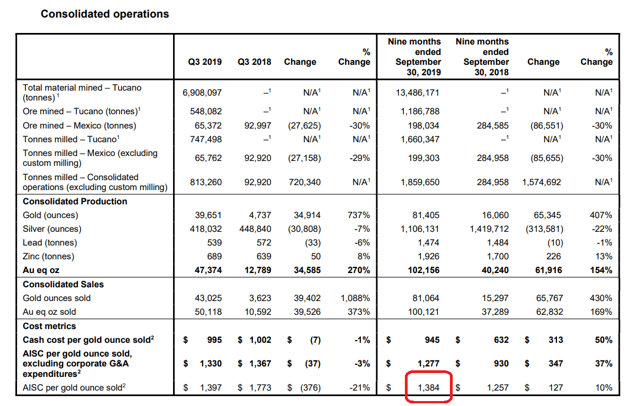 Based on the fact that Great Panther has negligible margins to put up positive earnings per share and is already at risk of not having enough capital for its FY-2020 capital expenditures, I see the stock as extremely high-risk. The market hates uncertainty, and this is especially true when the uncertainty is surrounding a company's flagship asset. With a high likelihood of an increased share count next year, I see it as unlikely that Great Panther will generate more than $0.01 in positive annual EPS.

If we look at the below daily chart, there isn't much to like here either. Great Panther has strong resistance overhead at $0.70 and $1.15, and I would consider any rallies that can't reclaim the $0.70 level to be noise. This is because these rallies would be occurring below prior broken support, and they would also carry a P/E ratio of over 50 based on the $0.01 in EPS I expect as the ceiling for FY-2020. Besides, the next support level does not come in until $0.36, which is another 20% below current prices. 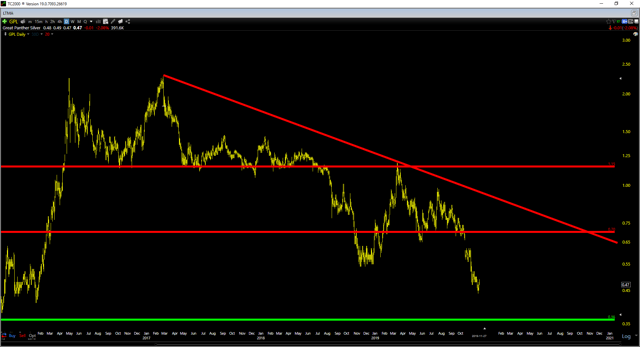 While bounces are possible for Great Panther after a steep drop, I do not see this as a stock worth betting on, even at current prices. I would view any rallies back to the $0.65 plus area as selling opportunities, and believe that capital is better utilized in gold miners without mine issues, and with positive earnings per share. Many value investors will argue that the stock is cheap at current levels, but the problem is that it's cheap for a good reason. The same was said of Guyana Goldfields at over $1.00 per share with similar mine operational issues, and it has since plunged another 50%. Based on this, I continue to rate Great Panther as an Avoid.

Taylor Dart
24.78K Followers
"A bull market is when you check your stocks every day to see how much they went up. A bear market is when you don't bother to look anymore."- John Hammerslough - Disclosure: I am not a financial advisor. All articles are my opinion - they are not suggestions to buy or sell any securities. Perform your own due diligence and consult a financial professional before trading or investing.
Follow