Despite reporting quarterly earnings that beat expectations, Western Digital (NASDAQ:WDC) sold off in the last month and is down 19%. As the company navigates past a cyclical trough, markets instead reacted negatively to the CEO’s retirement. This irrational reaction will prove short-lived: storage demand for both physical drives (“HDDs”) and the faster SSDs will continue growing. At 7.8 times forward P/E and a debt/equity of 1.07 times, WDC shares trade at an attractive valuation. The dividend yields 3.97%, an added bonus.

Western Digital earned $0.34 a share (non-GAAP) as revenue fell 19.7% to $4.04 billion. But the downside EPS of $0.45-$0.65, below the $0.75 consensus, spooked investors. The near-term headwind will prove short-lived because HDD and SSD margins are improving. The decline in flash revenue ended in Q1F20 and non-GAAP gross margins are bottoming at 20%:

Conversely, total HDD exabytes rose 23% sequentially while the average ASP per drive rose 7%. Capacity enterprise Exabyte shipments rose 60% Y/Y. Exabyte growth in calendar 2020 is similar to that of the SSD market, up in the mid-30% range Y/Y. Even though markets are forward-looking, it is ignoring the strong demand for storage, especially in the data center. Western Digital expects significant shipments for its 14-terabyte capacity drives. It has a 70-75% market share and faces little competitive pressures.

Still, Seagate (STX) is making a big push by challenging WDC in the capacity enterprise space. Yet volume shipments for the 18 terabyte drive looms. A sampling of the drive by the end of this year will follow with the start of 18TB shipments next year. And if Seagate makes inroads in its market, the company may launch 16 TB drives to defend its market share. 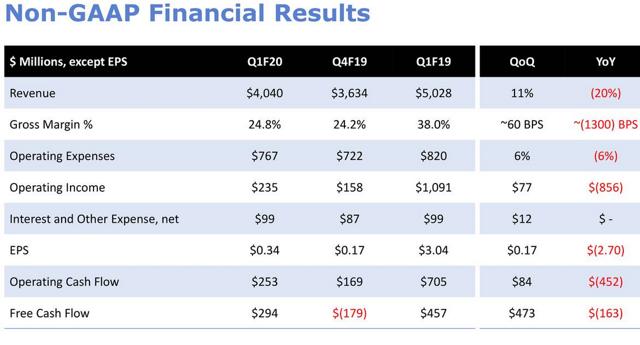 But if secular trends of the growth and value of data persist at a faster pace, its EPS will increase. Management set a goal of taking out around $100 million in operating expenses quarterly. It accomplished that but still has some incentive compensation to account for. In the medium term, the lower operating cost level combined with demand growth in the 35% range will lead to improving profitability.

Given the first half of calendar 2020 will be seasonally slower period, expect a buildup in inventory. This will minimize Western Digital’s margin recovery in the near-term. But as it moves through the back half of the year, better prices, improved demand-supply dynamic, and strong demand for the flash business will result in better overall full-year results.

As I previously mentioned, the CEO’s exit is a non-event. He will stay on board and will actively engage with the company until a replacement is found. It may take another six months before WDC gets new leadership. Either way, WDC has a healthy product portfolio. In the second half, it expects to see accelerating improvements in gross margins. Demand in new areas, such as enterprise SSDs and game consoles, will offset a slowdown in its more mature products. 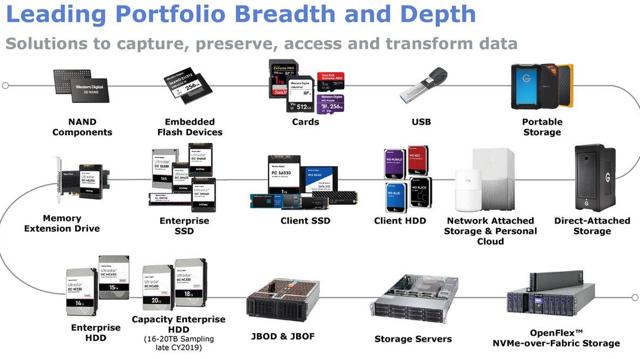 Although it is too early to predict, a product refresh in smartphones, driven by 5Gs, may give storage cards and SSDs a lift.

Fair Value and Your Takeaway

Investors may assume revenue growing by no more than 3% annually:

Source: finbox.io (click on the link to change revenue projections)

In a 5-year DCF Revenue Exit model, even at a pessimistic discount rate of 11% and higher working capital and capital expenditure, the fair value is over $70 a share. Despite my optimism that the stock is trading at a steep discount, technology stocks as a whole may underperform. The market is due for a mild correction since the S&P 500 (SPY) is up by over 25% YTD. Any increase in negative sentiment will give bears an excuse to beat WDC's stock lower. If that happens, value investors should consider buying the stock more aggressively.

Treatk yourself this holiday season to the DIY value investing marketplace service.

Do-it-Yourself Value Investing is a marketplace service. It is geared towards the technology, biotechnology, health care, and dividend-growth income stocks. Through top DIY model holdings, members are taught how to manage their trading and investments.

Disclosure: I/we have no positions in any stocks mentioned, but may initiate a long position in WDC over the next 72 hours. I wrote this article myself, and it expresses my own opinions. I am not receiving compensation for it (other than from Seeking Alpha). I have no business relationship with any company whose stock is mentioned in this article.