There's no question that National Beverage Corp. (NASDAQ:FIZZ) has been in trouble for the past several quarters. The stock has plummeted 40% since the start of the year on the back of legal problems, challenges with sales of its superstar sparkling water brand, poor forward revenue estimates, and consistent earnings misses. The stock seems to have found a bottom and has been recovering since the start of November 2019. At a forward price to earnings multiple of around 20, it would appear that FIZZ is still overvalued considering the expected revenue decline in Q2 2020. But is it? We'll see why it's not, even though it does command somewhat of a premium.

Armed with a hunch (and a hopeful sigh) that the worst is over for National Beverage, I believe it's still worth paying a premium for a chance to own a brand that is showing more than a little 'bouncebackability' in a challenging market and the odds stacked against it.

Here are some of my reasons. 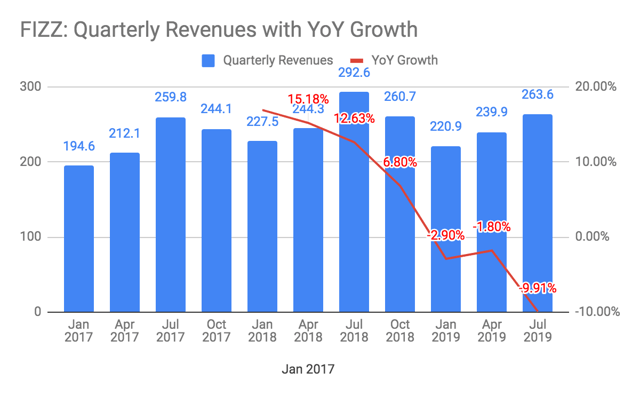 At first glance, the revenue growth trend can be misleading. It looks like things are going from bad to worse. After its revenue growth rate dipped into the red in Q3 2019, the company stayed under the zero-growth level for two more quarters. And Q2 2020 isn't going to be a positive shocker, either.

It's still in the red, but the point I'd like to highlight here is that it brings some semblance of normalcy back to seasonal revenue trends. 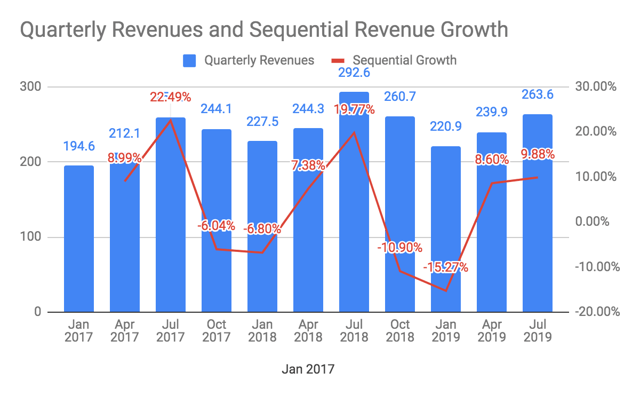 To elaborate, the sequential change between Q1 and Q2 revenues over the past two fiscal years has been as follows:

This is what seasonal revenues typically look like. That's why I used the phrase 'semblance of normalcy.' And it supports my hypothesis that the worst is, indeed, over.

Management used that same 'semblance of normalcy' angle to its advantage, indicating that the sequential growth between Q4 2019 and Q1 2020 was something other than a regular seasonal spike.

The surge in question was from $239.9 million to $263.6 million, a jump of about 10%. But the year-ago period showed a jump of nearly 20% in sequential revenue growth; the year before that, it was more than 22%. "Stair-step influence" is right, but "significant"? Perhaps not so much.

You might easily come to the conclusion that the management's statement was misleading. One commenter on the SA post for the earnings summary even used the word "spin"; but there are other signs that the LaCroix brand is getting back on its feet after taking a tumble in the wake of allegations of non-natural ingredients being present in the beverage, among other problems.

One of these signs is the social reach that the brand has been getting in Q1 2020. This was also highlighted in the press release for Q1 earnings. There are, of course, investors who couldn't care less about social signals; the fact is, they're fairly good indicators of consumer sentiment, which is crucial for a lifestyle brand like LaCroix. That the stock took a dive because of negative perception is tangible proof of that.

The second point I'd like to address is that FIZZ has long been an ideal acquisition target in an extremely fragmented market segment with plenty of small players and a few market leaders. It is also a segment where the CSD (carbonated soft drinks) nucleus is slowly breaking up and re-forming around healthier alternatives. And LaCroix represents that kind of healthy lifestyle in a big way. It's a brand that any traditional soda maker would be willing to pay a premium for because of its position as the second most popular individual brand of bottled sparkling water in the United States, with a 14.6% share of the market. 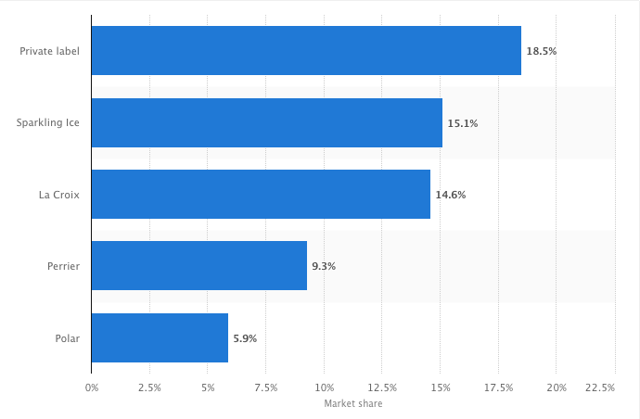 Right now is the ideal time for an acquisition bid or even an expression of interest because the brand has already managed to turn its negative image around and stem the bleeding at the top line, for the most part. The fight isn't over, but National Beverage's star brand has proven its resilience against unfounded media attacks in a typically unforgiving market.

At the same time, it gives National Beverage all the more reason to dig its heels in and command a premium - if such an offer were to be made. Moreover, other parts of its business, including CSDs, are still growing.

Why are these two aspects of the business so relevant to investors looking to get in?

First, if an inflection point in revenue growth is, in fact, imminent, then it stands to reason that the stock will begin appreciating again after the cataclysmic wiping out of billions in market capitalization. For context, FIZZ's market cap went from roughly $5.9 billion down to about $1.8 billion between September 2018 and September 2019. It is now back up to around $2.3 billion, indicating investor interest in the stock once again.

More recently, the stock has gained significant momentum after a +10% price dip following Coca-Cola (KO) launch announcement for its own AHA brand of sparkling water coming out in early 2020. I see it as additional proof that social and other branding efforts are working and that the LaCroix brand commands a premium. It is also further validation of the brand's strength in the market.

On the second point, if National Beverage does become the target of an acquisition, it will represent an opportunity to either cash out at a premium or trade FIZZ in for a bigger ticker, as the case may be.

An acquisition might not be on the cards for now but a turnaround wouldn't be hard to achieve. If Q2 2020 can deliver to the upper-end revenue estimate of $253 million, it could set the tone for a full recovery in Q3 2020. Analysts are already predicting that revenue for the third quarter might come in at $220.89 million for a slightly-more-than-flat year-over-year growth rate. That's at the upper end, so anything close to it would validate the turnaround.

In any case, it would be good to consider getting in before either of these eventualities. Q2 2020 results will be announced in the first half of December, and we can expect some positive movement for the stock around that time if the $253 million projection proves true.

The stock looks overvalued when you look at the absolute numbers. However, it is trading significantly lower than many of its sector peers. The market clearly doesn't expect much growth in the short term (PEG of 0.72), which means an early entry could lead to significant capital appreciation once revenues are back on the growth path. You might have to wait a couple of quarters or even until Q4 2020 to see that happen, but if you're a long-term investor it's worth your consideration at the current price.

Beulah Meriam K
3.32K Followers
I do deep-dive analyses into the top companies in multiple segments, including retail, consumer goods and technology.
Follow