The recent divestiture of the Workspace Management business to FM:Systems will allow Asure (NASDAQ:ASUR) to be a pure-play SaaS HCM (Human Capital Management). We found the background of the divestment strategic, given the asset and equity involved in the transaction worth $120 million. Following the divestiture, Asure will hold a minority interest in FM:Systems and receive some portion of the exposure to the Workspace Management sector.

Upon the divestiture and shift towards the new direction, we remain neutral on the stock. In particular, our concern lies in the company's positioning in the SMB and midsize HCM market when we put it in relative terms to its current product and go-to-market strategies. Asure's focus on the SaaS HCM means that the company will also now be competing in a huge, yet saturated market with questionable upside potential.

We believe that any bullish scenario in Asure would primarily hinge more upon the company's go-to-market strategies than the technical quality of the offering, as is the case with a lot of fast-growing SaaS companies. However, we found that there is a lack of cohesion between go-to-market strategies and technological sophistication in Asure's growth approach that we typically do not see in SaaS companies.

We think that such cohesion is even more important for SaaS companies targeting SMB and mid-size businesses, where preference towards low-touch sales and onboarding processes is higher. Consequently, Asure's shift into such SaaS markets is not followed by relevant online strategies despite its ambition to achieve a ~10% target organic growth. By only leveraging resellers, referral channels, and direct sales teams, however, it remains to be seen whether Asure leaves a lot of money on the table.

On the other hand, it is common for SaaS companies of any size to publish an app integration marketplace feature that not only allows its users to integrate with other SaaS apps through webhook or API (Application Programming Interface). Eventually, this online channel allows other existing SaaS users to discover other SaaS products and achieve viral adoption across the ecosystem. We even believe that the interconnected ecosystem has been the key reason as to why many SaaS companies are able to consistently maintain their double-digit growth rates even into their post-IPO stages. Ultimately, we would remain cautious about Asure's post-transition plan to achieve $100 million - $150 million through its cross-selling strategy.

Upside and Valuation: Going beyond the FY 2020 transition year

With the divestment of its Workplace Management Business still ongoing at least until FY 2020, there is a potential upside where the expected 8% - 12% annual growth following the end of the fiscal year may not be priced in yet. In recent times, Asure trades at ~20% off its 52-week high at ~$8.20 per share.

Given effectively no organic growth during the transition year, the big question investors have here is whether there is enough upside to take the risk in the near term. In that sense, the type of acquisitions the management has in mind that can produce the midpoint ~5% growth and the required financing scheme would be two key things we look forward to hearing in the next few quarters before making any decision just yet. As it stands, the company currently plans to refine its capital structure by paying off the outstanding debt with the $120 million proceeds from the divestiture, leaving little room for the company to pursue attractive acquisitions. 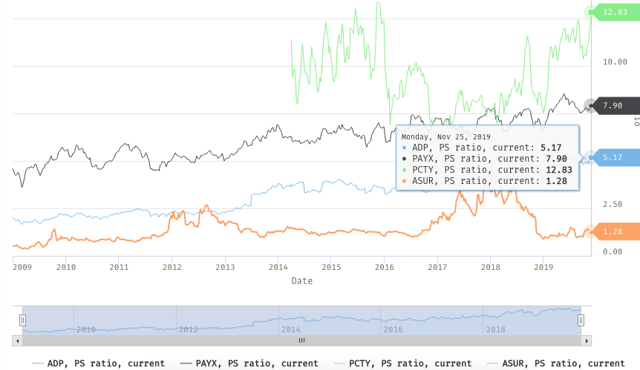 In the greater cloud mid-size and SMB HCM software market, we view Paylocity (PCTY), Paychex (PAYX), and ADP (ADP) as potential competitors. With a very low 1.28 TTM P/S despite the recurring revenue stream going forward, we believe the market is currently pricing in Asure's transition along with its lack of viral growth potential given its mostly offline go-to-market strategies. The selected universe median of ~6.5 TTM P/S represents where Asure can potentially trade given the successful absorption of the incremental overhead, recurring SaaS revenue, and EBITDA margin expansion beyond the transition year. Considering an expected revenue of $74 million and 1.76 P/S, we do not see the stock trading higher than ~$8.34 per share by the end of FY 2020. As such, we remain neutral on the stock most probably until the first half of FY 2020, where we plan to review our position upon further developments on the upside scenario.

Tech and Growth
2.47K Followers
Asset manager investing in technology opportunities driving disruptive innovation globally. While we are not accepting outside clients and investors at the moment, we occasionally share some of our internal investment memos, commentaries, and analysis on our site, https://tnginvestments.com.
Follow