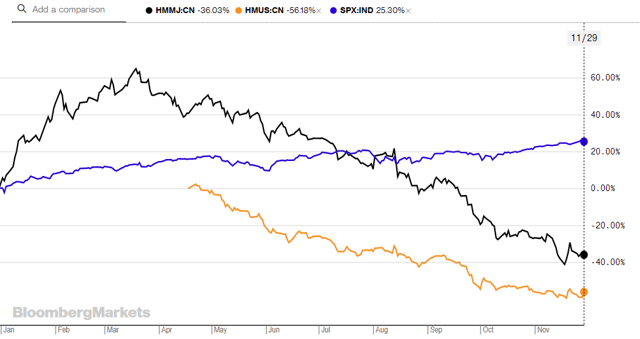 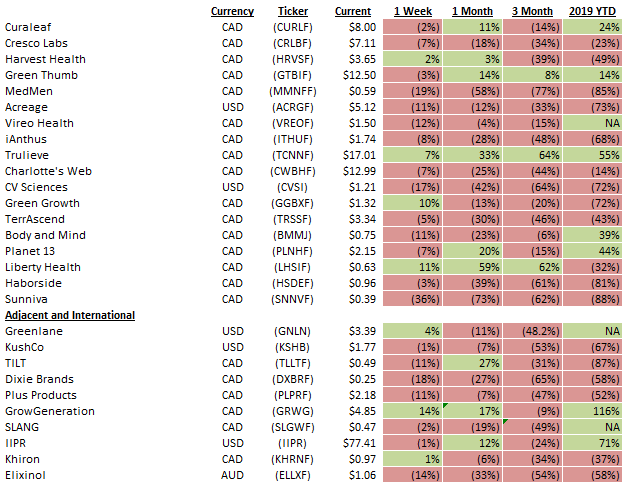 In an interview with Bloomberg last week, Aurora CEO Terry Booth said that he is expecting a "carnage" coming for the Canadian cannabis sector. Since the beginning of 2019, well before the sector began its current downturn, we have been warning investors about the bleak outlook for Canada. Now that the market has been in a correction for months, we think investors are becoming more realistic about the future outlook of the industry. Outside Canada, we have also expressed our opinion that the European medical cannabis market will remain tiny for the years to come, contrary to many Canadian LPs had claimed. Last week, Aurora products were suspended in Germany due to production issues and Terry Booth also acknowledged that the European market has been overestimated in the Bloomberg interview. We think the market has realized that Canadian LPs will derive very little sales from the EU which dramatically reduced their valuation.

The challenges in Canada and the EU make the U.S. market all that more important to the global cannabis industry. Last week, the CBD industry finally heard from the FDA but the message was not exactly what they were expecting. The agency said it cannot conclude that CBD products are safe for human and animal consumption. FDA's statement dampened investor enthusiasm for near-term industry growth and CBD stocks fell on the news. As the only federally legal substance in the U.S., CBD was deemed as a big opportunity for most industry players including Canadian LPs. CBD-focused players CV Sciences and Charlotte's Web both cited a lack of regulatory clarify on CBD as a primary reason for their Q3 underperformance. We expect the industry to face even more growth obstacles in the near-term as major FDM retailers could dial back their CBD plans due to FDA stance.

The global cannabis industry has experienced a roller-coaster as 2019 unfolds. As we head towards the end of the year, we will begin to review key developments that shaped the global cannabis industry this year and, more importantly, our updated view for 2020. You can review our 2019 predictions here and two of the three predictions we made have proven to be correct. The cannabis sector has seen divergent performances with several high-profile failures such as CannTrust, MedMen, and TGOD. The Canadian sector has also experienced a sharp sell-off although the U.S. sector also suffered heavy losses. The U.S. market was also hit by the vaping crisis, merger delays, and challenging financing market. These are things we didn't expect a year ago.

Looking ahead, we remain of the view that the U.S. market presents a better growth story than Canada due to its sheer size and large untapped legal market. We think Canada will enter a consolidation phase which will lead to corporate failures and a shake-up will leave only the strongest companies to survive. However, we remain confident that the global cannabis sector will enter a more healthy path towards redemption after a dramatic 2019 because the secular trend of increasing acceptance of cannabis worldwide is undeniable.

Cornerstone Investments
23.16K Followers
We are your best guide to cannabis investing. Read our 2021 Cannabis Sector Outlook here. We also provide in-depth industry analysis and coverage of 70+ cannabis stocks to help you get started.
Follow