Despite the surge in Ryanair's (NYSE:NASDAQ:RYAAY) share price in recent weeks, the ultra-low cost airline's shares are still trading too cheaply. Whilst it is likely that there will be a degree of price volatility in the short-to-medium-term, recent events have served to demonstrate that the airline is capable of growing its market share whilst still increasing average revenue per customer. If long-term investors are prepared to weather capricious short-term prices - the airline still represents good value at current prices.

Since I initially performed a valuation of Ryanair’s shares on the 20th August 2019, the share price has risen by a stellar 62.6% (correct as of 02/12/19) to €13.97 (LSE:RYA) – which outstrips the growth that I predicted over a short to medium horizon. As a result, I thought it would be beneficial to write a follow up piece that seeks to explain why there has been such a rapid growth in the share price, whether or not this share price is sustainable, and some predictions as to where the share price is likely to head from its current level. 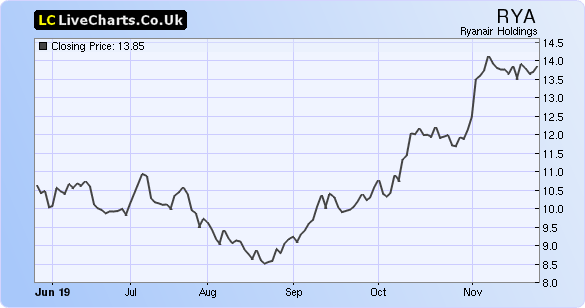 Ryanair’s H1 FY20 results have been a driving force behind the sharp increase in its share price since my initial valuation, as they demonstrated the airlines success in several key areas. Firstly, Ryanair is on track to meet its target of flying 153m passengers in FY20 – it was able to carry 86m passengers in the first half of the financial year, and this illustrates the success that the airline is achieving with respect to passenger growth. Ryanair has also been able to reduce average fare per passenger by 5% during H1 – which led to the strong increase in passenger numbers mentioned above – but increase ancillary revenue by 16% - which contributed to a 1% overall increase in revenue per passenger. This is evidence of a dual success: increasing passenger numbers whilst simultaneously increasing revenue per passenger, and illustrates the strength of Ryanair’s brand and business model. As a result, revenue rose 11.4% to €5.39bn in H1 – providing investors with a clear indication of the airline’s ability to capture market share. Ryanair was also able to further reduce its average costs per passenger to €29 (ex. fuel) – which is 26% less than Wizz, 45% less than EasyJet and 64% less than Norwegian, and serves to validate the excellent cost control strategy that the airline utilises, and justifies its ability to charge ultra-low fares to customers. EPS has also risen 3% from €0.9974 to €1.0247 – partly as a result of the €700m share buyback that the management of Ryanair are currently completing – which has also contributed to the elevated share price of late.

Another contributing factor to the sharp rise in Ryanair’s share price since August 2019 has been the failure of Britain’s oldest travel agent: Thomas Cook. The firm’s spectacular collapse in October 2019 resulted in the need for a £100m repatriation bill being footed by ATOL as passengers from all over the world were transported home on charter flights. Despite Thomas Cook being a more diversified business than Ryanair - with a greater focus on package holidays than flights – there was still an element of competition, as Thomas Cook’s flights were priced towards the lower end of the price range. Crucially however, Thomas Cook and Ryanair were in direct competition on routes to destinations such as the Canary Islands, the Balearic Islands and several parts of Greece – and in many cases were the only two airlines to fly those routes, and as a result Thomas Cook’s collapse has allowed Ryanair to increase both its prices and load factor on these select routes. Ryanair's subsidiaries - particularly Lauda in Austria - have also been able to benefit substantially from the downfall of Thomas Cook. This will certainly aid Ryanair in its goal to carry 153m passengers in FY20, and the significant barriers to entry in the airline industry – coupled with Ryanair’s ultra-low pricing model - are likely to prevent competitors from moving in to routes where Ryanair is the sole operator. There have also been implications of Thomas Cook’s failure on Ryanair’s costs: the resulting increase in availability of second-hand aircraft, experienced pilots and cabin crew have helped Ryanair to further cut its costs as mentioned previously.

However, there are also several risks to Ryanair’s business that are likely to have a negative impact on its share price in the short-to-medium-term. As part of Thomas Cook’s administration package, the airline’s landing slots at several UK airports were sold off (being some of the defunct company’s most valuable assets) – and these were purchased by direct competitors of Ryanair. EasyJet purchased slots at Bristol and London Gatwick airports for £36m, and Jet2 purchased slots at Manchester, Birmingham and London Stansted for an “undisclosed sum.” This could pose a significant threat to Ryanair’s business, as all of the purchased slots are at key bases that Ryanair operates out of. EasyJet and Jet2 both operate within the low to ultra-low cost airline market, meaning that Ryanair now faces more direct competition than it did previously when Thomas Cook operated from those bases. This could result in the need to reduce fares in order to keep passenger levels constant, which would mean that profitability would decrease as a result. However, there is also the possibility that the management of Ryanair deemed that the landing slots did not fit in with the strategic plan of the airline, or that the cost of the slots was too high given the revenue that could be earned from them in the future. Yet the purchase of the slots by competitor airlines can only serve to strengthen their position in the market – at the expense of Ryanair's – and this should be a consideration investors take into account when appraising Ryanair’s shares.

Moreover, there has also been a development with regard to Ryanair’s 737 Max orders from Boeing: and the news has not been good. As a result of continued investigations into the disasters involving the aircraft in October 2018 and March 2019, Boeing has had to cut the delivery schedule for Ryanair’s 737 Max order further, and this has meant that the first 737 Max planes will be received in “March or maybe April” at the earliest. This is a further quarter behind the previous estimation, and means that Ryanair is only expected to take delivery of a maximum of 20 aircraft before summer 2020 – but there is “a real possibility of none.” This hinders Ryanair’s ability to take advantage of the cost savings that will be generated by the “gamechanger” aircraft, and any savings expected in FY20 will now be pushed into FY21 – with there being a knock on effect as future 737 Max deliveries past FY21 are also delayed. The result of this has been a decrease in expected FY21 traffic growth down to 3% from 7%, and when this is combined with the delay in costs savings, short-term profits are likely to be eroded.

There is also the continued uncertainty surrounding Brexit: when I previously performed analysis over Ryanair in late August, the date of Brexit was set in stone as the 31st October – however this has now been delayed until the 31st January 2020. There is also a general election taking place before Britain’s proposed departure date, and this adds additional uncertainty as to what the final details of the Brexit deal will be. This would affect Ryanair as demand is likely to be muted until the terms of the deal are finalised, and in addition there may be additional regulations that need to be met as a result of the Brexit deal – along with a potential delay in operations whilst these regulatory standards are met. Fuel – as with any other airline – makes up a significant proportion of Ryanair’s costs, and given that there has been significant volatility in recent months in the wake of the drone strikes on Saudi oilfields (as an example) – and this creates uncertainty for airline in budgeting and forecasting costs. However, Ryanair has hedged 90% of their FY20 fuel requirements at $71/bbl and 63% of their FY21 requirement at a lower $61/bbl – which suggests that this risk is being successfully managed.

Owing to the continued uncertainty surrounding Brexit and the persistent 737 Max delays – which have pushed Ryanair’s medium-term cost savings plan back by several quarters already – it is likely that there will be some degree of share price volatility in the short-to-medium-term. However, as a result of Thomas Cook’s failure - which has reduced competition at the lower end of the price range, coupled with Ryanair’s strong growth in customer volume and average revenue per customer, I still believe that Ryanair represents a good long-term hold. The management of Ryanair are €250m of the way through a €700m share buyback – which represents 5% of its current market cap – which is also likely to contribute to share price gains in the short-to-medium-term. As a result of these factors – and given the significant share price gains in recent months – I would rate Ryanair as an overweight buy, however it is less attractive now than it was at its 12 month low in August 2019. Investors should be cautious of developments with regard to the 737 Max deliveries and Brexit, and ensure that Ryanair shares are held as part of a well-diversified portfolio.