Berry Petroleum Corporation (NASDAQ:BRY) was severely hit by California Gov. Gavin Newsom's decision to stop the approval of new hydraulic fracturing in the state "until the permits for those projects can be reviewed by an independent panel of scientists" and impose a moratorium on new permits for steam-injected oil drilling - an enhanced oil recovery method (EOR), which was considered to be a culprit of an oil spill in Kern County. After the decision was announced, the stock went into a tailspin, as investors started to trim their exposure to risky equity with fuzzy prospects. As a result, the market capitalization slipped by ~29%.

Upon cursory inspection, it looks entirely rational, as, in the wake of the moratorium that hammered future production, the stock's intrinsic value edges lower, as the impacted company is no longer able to produce oil and generate cash flow, which is at the crux of the fair price of the equity.

Yet, during the days that followed, a few insiders purchased a substantial amount of stock, which signal the firm's executives might have a much deeper understanding of the problem, so their contrarian sentiment might be entirely justified. Also, on November 19 and 20, to soothe investors, the company published a statement and provided clarification of the moratorium impact, emphasizing that it "continues to see strong year-over-year growth in 2020 despite the moratorium."

So, it appears that the market emotionally applied a much higher discount than needed, and the sell-off was irrational and speculative, mainly invigorated by panic. Besides, the company has a few apparent merits like positive last twelve months levered free cash flow, while the bulk of the U.S. onshore shale-focused players have issues with balancing growth, cash flow, and returns. I have touched upon that matter a few times in my articles on E&P companies. In this sense, I reckon with EV/EBITDA of 2.78x, Cash Return on Total Capital of 18.7%, and clear 2020 production growth prospects unimpacted by the moratorium, BRY is undervalued, as the market misunderstands the stock at the moment.

Berry Petroleum is a small-cap E&P company focused on conventional production in California, Utah, and Colorado. The company also owns five natural gas burning cogeneration plants that produce electricity and steam. These facilities are essential for the generation of steam required to heat the oil and enhance recovery.

Its closest peer is California Resources (CRC), which has reserves in the San Joaquin, Los Angeles, Ventura, and Sacramento Basins. The peer was also severely punished by the fracking crackdown, as it lost around 21.7% of its market value. The company has also already clarified that it did not "expect yesterday’s proposal by the California Department of Conservation to have a significant effect on its production, plans or reserves."

Berry's flagship assets are in the San Joaquin basin in Kern County in California (e.g., Midway-Sunset and South Belridge oil fields), while it also operates in the Uinta and Piceance basins in Utah and Colorado, respectively. A critical remark is that the basins in the Rockies do not contribute that much to the company's sales and yield mostly gas. Also, the amount of 2019 capital expenditures attributed to the Rockies was minuscule compared to California. So, in the case of abrupt production stoppage in the state or any operational hindrances at the San Joaquin, the top line would be pummeled, as oil fields in Colorado and Utah would simply be unable to replace lost barrels.

Berry Petroleum has a few clear advantages. First, its production is high-margin, as oil comprises 87% of output. Second, the California market is isolated from the rest of the Lower 48, as there are no major crude oil pipelines connecting the state to the rest of the U.S. So, it imports 17% from non-OPEC and 42% from OPEC+ countries, and, not coincidentally, oil contracts are tied to Brent price; thus, the company sells its oil at a premium to shale-focused producers.

Another advantage is the lack of takeaway capacity constraints, which could weigh on production. In Q3, its output added up to 29.6 kboepd on average; California made the highest contribution of 89.5%. Besides, conventional production has lower decline rates and low capital intensity, which allows it to generate a cash surplus while also investing in output (and revenue) growth.

Berry's history in the 2010s has not been easy, as, during the last protracted oil slump, it had enormous losses; the company was unprofitable until December 2018. In 2019, it has delivered solid results despite weaker oil prices amid the trade war, the soft global economic growth, and hydrocarbon demand concerns. In Q3, Berry reported 4.6% LTM revenue growth underpinned by resilient production. Its net CFFO rose ~2.5x compared to FY 2018. Also, the company had a staggering last twelve-month GAAP profit margin of 31.3%.

In 2017, BRY began to ameliorate its capital structure, bringing the Debt/Equity ratio from 343% to only 40% now, which is not ideal, but still much better than in the past. An important notice is that BRY has no cash & cash equivalents on the balance sheet since June 2019, as it uses the revolving credit facility as a primary source of liquidity.

The company has been paying a $0.12 quarterly dividend since November 2018. The recent sell-off propelled the dividend yield to ~6.1%, making the stock an attractive pick for income-focused investors with low or moderate risk aversion.

Berry pays a dividend within levered FCF. The methodology the company's management uses to compute levered free cash flow is different from the one I typically use. For instance, it uses adjusted EBITDA and capex on an accrued basis (the method is explained in greater detail here), while I always take net CFFO and capex from the cash flow statement to calculate levered FCF to Equity. So, I estimate its last twelve-month FCFE to equal $47.2 million; the amount covers annual dividends of $36.8 million 1.3x.

As I have already mentioned above, California Resources is Berry's closest peer. I suppose it is worth comparing them using a few upstream-specific ratios like EV/Total proved reserves, EV/Production, and more generic EV/EBITDA and cash flow-based ROTC (calculated as net CFFO divided by average total capital, which, in turn, is a sum of shareholder equity and total debt) to gain an understanding if one company is trading at a discount to another.

First and foremost, CRC is overwhelmed by debt. In Q3 2019, its Debt/Equity approached 860%, while Total Debt/EBITDA stood at 4.8x. So, its startling Return on Equity of 89% does not make sense, because the share of debt in the capital structure is humongous, and, hence, ROE is distorted and should be replaced by ROTC or ROIC. 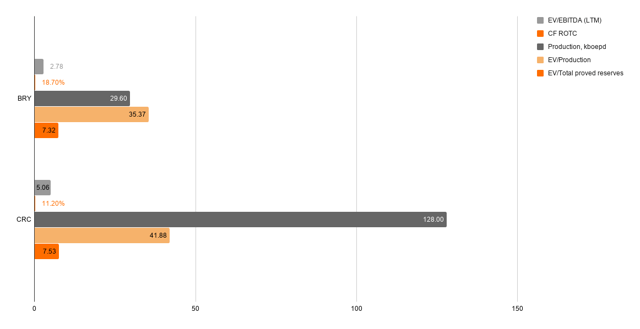 As you can see from the chart above, BRY is unquestionably ahead of CRC. It uses capital more proficiently and has much lower EV/EBITDA and EV/Production ratios, while its EV/Total proved reserves multiple is in line with the peer's metric.

Despite weaker Brent and WTI, before the sell-off provoked by the moratorium, Berry has delivered solid returns this year.

At the moment, BRY is clearly undervalued, and it trades at a substantial discount even to the closest peer. The stock price has already recuperated slightly, while insider buying also instills confidence that the moratorium will not have a material impact on the company's performance and that the market might re-evaluate the stock in the near term.

The flip side is that though the company assured 2020 production would not be impacted by the moratorium, output from 2021 and further might be under question, but, at the moment, it is too early to make any estimations.

Vasily Zyryanov
1.65K Followers
Vasily Zyryanov is an individual investor and writer.He uses various techniques to find both relatively underpriced equities with strong upside potential and relatively overappreciated companies that have inflated valuation for a reason.In his research, he pays much attention to the energy sector (oil & gas supermajors, mid-cap, and small-cap exploration & production companies, the oilfield services firms), while he also covers a plethora of other industries from mining and chemicals to luxury bellwethers.He firmly believes that apart from simple profit and sales analysis, a meticulous investor must assess Free Cash Flow and Return on Capital to gain deeper insights and avoid sophomoric conclusions.While he favors underappreciated and misunderstood equities, he also acknowledges that some growth stocks do deserve their premium valuation, and its an investor's primary goal to delve deeper and uncover if the market's current opinion is correct or not.
Follow