There were many things to be grateful over the Thanksgiving holiday, including personal finances for many. Stock market investors were especially thankful for the new record highs achieved in the S&P 500 index, which rose a heaping +3.4% last month, bringing 2019 stock market gains to a whopping +25.3%. Any concerns over politics, China trade, global monetary policy, Brexit negotiations, slowing economic growth, and other fears have been overshadowed by record corporate profits, generationally low interest rates, historically low unemployment rates, rising wages, strong consumer confidence, and hopes of an economic recovery abroad.

Despite the strong advances, concerns remain over a bubble or a stratospheric stock market. These worries of inflated gains seem overblown if you consider stocks were down -6.2% in 2018. In other words, if you combine 2018-2019, so far, the two-year period averages an +8.4% annualized return - a more reasonable advance. One thing is for sure, this bull market, which started in early-2009, has been no turkey. Since the S&P 500 bottomed at 666 in March of 2009, the index finished the month at over 3,140 - almost a quintuple in value over a 10-year period (not too shabby).

I get the question a lot, "Wade, don't you think the stock market is crazy now and it is going to crash soon? It's gone up so much and is at a record high." Just because the stock market hits a record level doesn't mean it will stop going up. In fact, since 2013, the S&P 500 has hit 38 new, monthly record highs (see chart below). For each of these new records, I have listened to anxious investors brace themselves for another crash resembling the 2008 financial collapse. The only problem is the 100-year flood normally doesn't come every 10 years, and as history often proves, record highs often beget future new record highs. 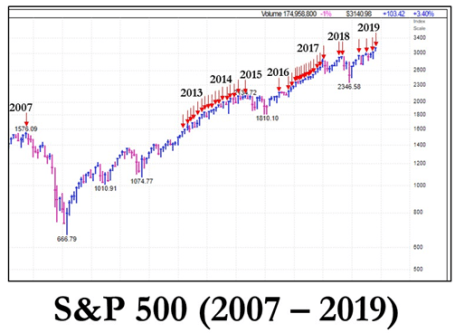 Be Careful to Whom You Listen

There are always varying opinions about the level and direction of future stock prices, but I always warn investors to be careful about following the judgments of television talking heads, especially when it comes to economists, strategists, and analysts, all of whom typically have very little experience in actually investing. These prognosticators typically are very articulate and persuasive but have little-to-no experience of really managing money. Traders generally fall into the useless camp as well because their opinions are moving at the speed of light based on the ever-changing headlines du jour, thereby making this fickle advice worthless and ineffective. Instead, investors should pay attention to successful long-term investors who have proven the ability to make and preserve wealth through years of up-and-down markets. You don't have to believe me, but when the most successful investor of all-time, Warren Buffett, says the stock market is "ridiculously cheap," it probably makes sense to pay more attention to his words of wisdom versus the latest political headline or dangerous and speculative day trader advice to buy-buy-buy or sell-sell-sell!

Although Warren Buffett freely provides his opinions, he openly admits he has no idea what direction stock prices will do in the short-run. So, if the greatest investor of all-time cannot predict short-term direction of stocks, then maybe you shouldn't try to predict either? Case in point, corporate profits were up over 20% in 2018 (see chart below) and stock prices went down, while this year corporate profits have been essentially flat and stock prices have catapulted approximately +25%. This goes to show you that short-term stock movements can be incredibly difficult to predict. You will be much better off by focusing on making sound investments and following a suitable strategy based on your unique objectives and constraints. 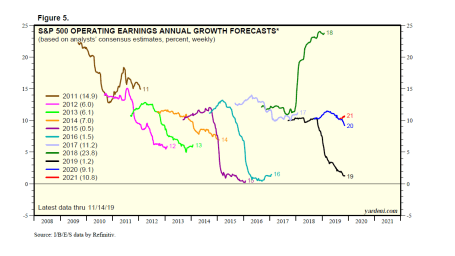 You may have gotten some heartburn by feasting on too much turkey, mashed potatoes, stuffing, and gravy; however, investors are feasting on new record stock market highs despite investor anxiety. When the anxiety eventually turns to euphoria and gluttony, from fear and skepticism, then that will be the time to reach for the Tums antacid.

This article is an excerpt from a previously released Sidoxia Capital Management complimentary newsletter (December 2, 2019). Subscribe on the right side of the page for the complete text.

DISCLOSURE: Sidoxia Capital Management (SCM) and some of its clients hold positions and certain exchange-traded funds (ETFs), but at the time of publishing had no direct position in any other security referenced in this article. No information accessed through the Investing Caffeine (IC) website constitutes investment, financial, legal, tax or other advice nor is to be relied on in making an investment or other decision. Please read disclosure language on IC Contact page.

Wade Slome, CFA
1.24K Followers
Wade W. Slome, CFA, CFP® is President and Founder of Sidoxia Capital Management, LLC and published author of How I Managed $20,000,000,000.00 by Age 32. In addition, Mr. Slome has been a media go-to resource as seen on CNBC and ABC News. He has also been quoted in the Wall Street Journal, USA Today, New York Times, Dow Jones, Investor's Business Daily, Bloomberg, Smart Money, among other media publications. Online, he is lead editor of the investment blog, InvestingCaffeine.com and a contributing writer to Morningstar, and Wall St. Cheat Sheet. Bloomberg identified him as the second youngest manager among the largest 25 actively-managed U.S. mutual funds in 2005. Besides his work at Sidoxia, Mr. Slome is an instructor at the University of California, Irvine extension department, where he teaches the Advanced Stock Investment course. Wade Slome holds an MBA from Cornell University with an emphasis in Finance. He earned a B.A. in Economics from UCLA. In addition, he holds the credentials of CFA (Chartered Financial Analyst) and CFP® (Certified Financial Planner). Mr. Slome managed one of the ten largest growth funds in the country ($20 billion in assets under management) at American Century Investments, and currently manages a hedge fund in addition to separate customized accounts for a selective client base at his firm (Sidoxia Capital Management, LLC) in Newport Beach, California.
Follow
To ensure this doesn’t happen in the future, please enable Javascript and cookies in your browser.
Is this happening to you frequently? Please report it on our feedback forum.
If you have an ad-blocker enabled you may be blocked from proceeding. Please disable your ad-blocker and refresh.