Editor's note: Seeking Alpha is proud to welcome M. Zack Norman as a new contributor. It's easy to become a Seeking Alpha contributor and earn money for your best investment ideas. Active contributors also get free access to SA PREMIUM. Click here to find out more »

Editor's note: Seeking Alpha is proud to welcome M. Zack Norman as a new contributor. It's easy to become a Seeking Alpha contributor and earn money for your best investment ideas. Active contributors also get free access to SA PREMIUM. Click here to find out more »

While Bitcoin (BTC-USD) and cryptocurrency prices have sharply corrected downwards, it may have already signaled a new bottom at $6,500, as it has bounced sharply to the $7,400 resistance point within hours, marking increased accumulation pending the +50% pullback.

The cryptocurrency market is experiencing a large market rout, with overall market cap dropping to below $200 billion for the first time since May 10th 2019 at the end of the months long crypto winter, talked about as the crash of November 2018.

Just a month before in late October, Bitcoin along with other cryptocurrency pairs had risen +40% (Bitcoin rose to a high of $10,600) after positive comments by the President of China, Xi Jinping, as he endorsed China's development of the Blockchain industry, and sought to harness the abilities of its technology for China's industrial growth. However, no mentions were made then of any cryptocurrency, such as Bitcoin.

Surging search volumes for "Blockchain", and modest increase for "Bitcoin" on Baidu and WeChat. Source: The Block

On November 11th, 2019, China's largest and most influential state news agency, Xinhua, published an article headlining Bitcoin, titled “Bitcoin: The First Successful Application of Blockchain Technology” on their newspaper. The article itself explained the various machinations of Bitcoin, such as how Blockchain works, currency mining, and P2P transactions. China had also lifted cryptocurrency mining from its blacklist, thus pulling it from a grey-area that long remained legal, but controversial.

So, what caused the crash?

1) As these developments were viewed as a positive sign forward for cryptocurrencies, it opened the doors for increased speculation. However, the overreaction was soon made aware by China's authorities, as they made attempts to further increase scrutiny of cryptocurrencies, as reported by CoinDesk and The Block.

Their crackdowns began targeting companies and projects related to cryptocurrency and Blockchain, citing fraudulent activities. The action undertaken by Chinese authorities is widely agreed to be the primary cause for the recent plunge to $6,500, as investors and traders are fearful of any potential ban as China plans on releasing its own digital currency soon.

2) Another reason to be concerned about is potential miner capitulation. As more cryptocurrency miners are losing their net worth due to market downturns, they are obliged to sell more of their cryptocurrency holdings to maintain their operations, and if necessary to upgrade their hardware. A market downturn, as is with the current +50% pullback, will push more miners to capitulate, and to dump their cryptocurrency holdings onto public exchanges, thus increasing supply with only moderate demand. 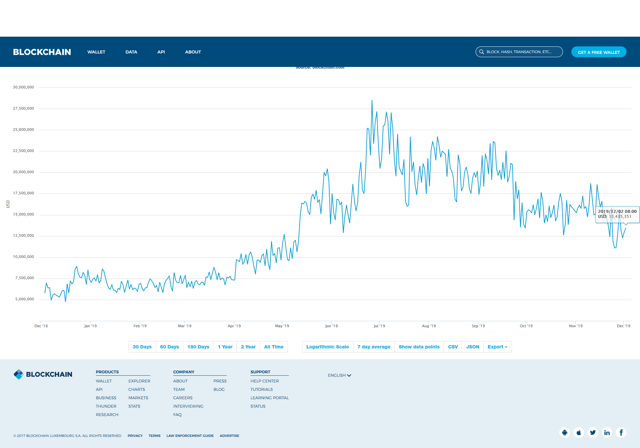 According to data from Blockchain.com, cryptocurrency miners' revenue have also dropped to its lowest level since May 2019. Source: Blockchain.

Historically, miner capitulations have not always had a significant impact on price. However, there are uncertainties now, as we are seeing more institutional entry into cryptocurrencies, and Bitcoin is only 6 months away from halving in 2020.

The capitulation may have already started, as analyst ByteTree has shown on Reddit; one cryptocurrency miner placed a large $17.6 million sell order, thus dumping into the markets just around the descending $8,000 mark, days before the current downturn.

3) Next, the liquidity markets in the cryptocurrency space are at the lowest in recent months, with bid-ask offers widening sharply in the past 3 months, further exacerbated by the downturn, following miners dumping their holdings onto the open markets to maintain their operability. Here, VanEck director, Gabor Gurbacs, quoted data from Skew Markets, showing increasing bid-offer spreads on some cryptocurrency exchanges. 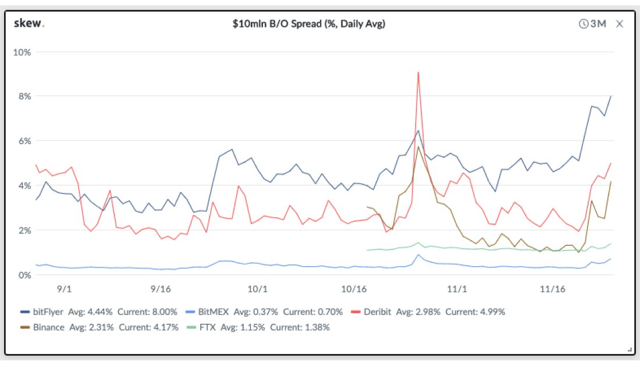 The lack of liquidity has also been blamed on China's recent crackdowns, thus creating a negative sentiment for investors and traders, as they attempt to avoid trading on the markets until further news from China comes out.

What to look out for next

It's worth mentioning, however, that prices dipped slightly on November 27th, 2019, under $7,000 after cryptocurrency exchange UpBit announced a cybertheft of $50 million worth of Ethereum tokens.

Historically, Bitcoin usually has a roughly 40-50% pullback after every rapid upwards surge. Since mid-December 2018 until late-June 2019, Bitcoin surged approximately +340% in that 6-7 month period. It has currently pulled back marginally more than usual, by approximately 52% from its late-June 2019 highs of $13,800.

Currently, there are 2 issues that could play critical to Bitcoin's price and the overall cryptocurrency market, which is what we need to look out for - 1) if there are any further negative news to come out of China, and what their crackdowns may lead to; 2) whether there is continued market illiquidity, and whether cryptocurrency miners are capitulating en masse.

M. Zack Norman
109 Followers
Part-time investor, trader, and full-time enthusiast - I have been involved in cryptocurrencies since 2013, and I will write about its effects on the overall markets, including progressive ideas for the Blockchain.
Follow