Workers want to be paid an honest, fair wage for the work they do. They want to be able to provide for their families by being justly compensated for their part in helping grow the U.S. economy. They deserve to be able to put food on the table and receive healthcare and other benefits.

The healthcare industry is full of challenges despite its growth potential. In the U.S., health expenditures are projected to rise by $3.5 trillion until 2040, with similar trends in BRIC countries, according to the World Economic Forum and OECD.

As life expectancy around the world continues to rise, the number of people aged 65 and over is increasing at a faster pace. Out of one billion people added to the world’s population by 2025, almost a third belong to the over 65 years old category.

Can they afford proper healthcare, and what can governments around the world do about it? That's one of the biggest challenges of our time and will shape the future of the entire healthcare industry.

According to a recent study conducted by the Brookings Institute, 65% of the global population will be middle class by 2030. Changes in demographics and regional trends force healthcare companies to adapt too - for instance, Europe’s population is shrinking, while Africa’s is doubling by 2050.

The global challenges for the industry are visible in the United States too. Big players operating here suffered in the last few years from increased competition, a new paradigm of public and private sector collaboration, and the inability to adapt to a fast-changing environment heavily regulated by governments.

Tenet Healthcare (NYSE:THC) is one such company. Operating 65 hospitals and employing over 110k people, the company saw its share price melting from $60 to $13 between 2015 and 2018. It currently trades above the $30 mark - but is this the long-awaited turnaround?

From a technical perspective, the price reacted to classic patterns every time so far in the past. It topped around the $60 level after breaking out of a bullish flag. After the double top, it formed a falling wedge that broke higher.

The recent spike higher seems to be technical too. The last consolidation resembles a triangle as a reversal pattern, and offers a tempting risk-reward ratio for a trade targeting the $60 level again with a stop at $20.

But crunching numbers on the recent financial statement do not confirm such an optimistic break. Tenet Healthcare reported a net loss of $232 million on $4.56 billion in net operating revenues for Q3 2019. 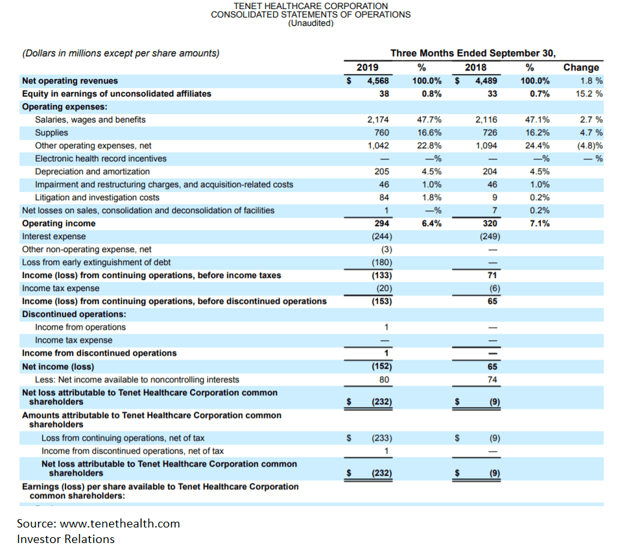 However, the recent move higher seems to have gripped the entire sector. As mentioned in one of the recent Lead-Lag reports I wrote, value investors continue to jump in, while sector fundamentals still look attractive. Political developments, such as the recent billing transparency order, look like they won’t significantly impact healthcare providers, while a likely split Congress following the 2020 election should prevent major reform and overhaul from happening anytime soon.

Is it enough to justify a move back to $60 and beyond? Or is the recent optimism just another spike on a bearish chart?

Considering how Tenet stock price has reacted to all previous technical patterns so far, and coupled with the attractive sector fundamentals, the risk-reward ratio is appealing enough to give it a shot. A move below $20 invalidates the bullish triangle.