U.S. dividend-paying firms turned in another "blah" performance during the month of November 2019. The number of dividend rises was down while the number of dividend reductions was up, but only by enough to put their numbers close to the threshold signaling that recessionary conditions are present in the U.S. economy without crossing over it.

The following chart adds November 2019's data to the end of the series of data on dividend increases and decreases recorded in the U.S. stock market since January 2004: 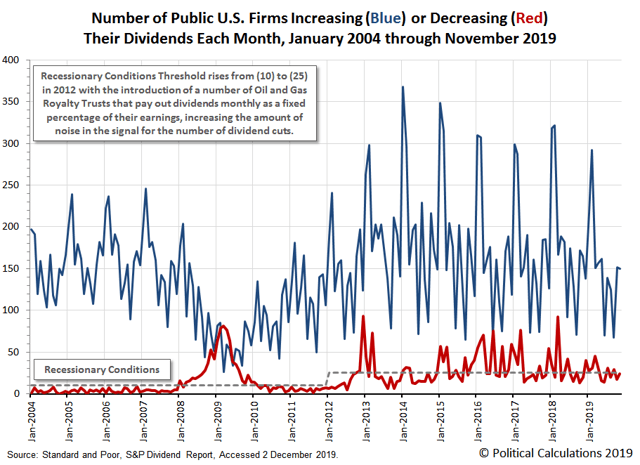 Until then, if you want to check our dividend statistics data source for yourself, which includes a wealth of other market-related data, you'll find it referenced below...

Ironman at Political Calculations
2.23K Followers
Ironman is the alias of the blogger at Political Calculations, a site that develops, applies and presents both established and cutting edge theory to the topics of investing, business and economics. We should acknowledge that Ironman is either formerly or currently, and quite possibly, simultaneously employed as some kind of engineer, researcher, analyst, rocket scientist, editor and perhaps as a teacher of some kind or another. The scary thing is that's not even close to being a full list of Ironman's professions and we should potentially acknowledge that Ironman may or may not be one person. We'll leave it to our readers to sort out which Ironman might behind any of the posts that do appear here or comments that appear elsewhere on the web!
Follow
2 Comments